When I first saw the ingredients for this week's Platinum Challenge I wasn't especially excited. Peanut butter, honey, wine, onions, and seafood. See, I have this thing...I don't eat fish. Which is not to say that I don't eat seafood. I have very expensive seafood taste. I basically eat anything that's not kosher. Shrimp, lobster, crab. I eat shark, but honestly, the last time I made shark the apartment smelled for days, so I wasn't going down that road again.

I looked over the ingredients again. I can do this, I just have to make sure I use shrimp for the seafood dish. And shrimp and wine? That's like scampi. Easy. Of course, that left me with the task of trying to find a dish that used peanut butter, honey, and onion. Ummmmmm......So Scampi was out. Back to the ingredients.... A shrimp in peanut sauce would be excellent, throw a little green onions into the mix and 3 ingredients down. I could definitely make a dish that used honey and wine, it would be a spinoff of my Citrus Chicken that used honey but not wine. That led to my Orange Chicken at home.

I had leftover noodles from my pad thai, so Shrimp with Peanut Noodles it was. Now, this dish should be served hot, but it is SO quick and easy to make (especially if your noodles are already cooked, but even if their not it just adds another 3 minutes) that it was finished between the time Jon called me to let me know he was on his way home from surfing and the time he got home. I didn't want to heat it up, because I think hot cucumbers are gross, so we ate it cold. It was still great. One of the things I love about shrimp is that they really require no seasoning because they have such great flavor on their own. And Jon thought the noodles were perfect with dish. It was good even though it was cold!

Now that it gets dark late, Jon spends more time in the water. He goes surfing after work and stays till the sun goes down. Last night that meant 9pm. This gives me a little extra time in the kitchen, which is nice because its such a wind-down after studying. Especially now that I'm back to running in the morning before studying. I decided to make dessert for him as a way to thank him for putting up with me. I'm a total PITA these days. Anxious, snappy, and emotional - even more than normal. Yesterday, he was even afraid to help with the laundry because last time he did he got his head bitten off for doing it wrong. I came across the recipe for oreo truffles in Sarah's blog and thought they would be a perfect thank you for him. Now, this was not the first time I'd heard of oreo truffles, these are one of the most popular dishes on the Nest. And I don't just mean on the What's Cooking Board, they're also mentioned quite frequently on my home board. So I knew they had to be good. And there's not a redeeming quality about them. They have 3 ingredients, none of which are healthy - Jon would be in heaven. So I rolled my little balls of oreo and cream cheese, dipped them in chocolate, sprinkled them with crumbs, and put them in the fridge to wait. The results were dramatic:
Case study #1 - Jon: You made truffles? That's so gourmet!
Case study #2 - Jon takes a bite, his eyes roll back in his head. He might be unconscious, he was never all that loquacious to begin with, so its hard to tell. Then he looks at me and smiles a gigantic smile. (I think he likes them)
Case study #3 - Jon can only eat 2 truffles. 2! This is brilliant! This is a boy who eats an entire package of oreos in a sitting. An entire quart of ice cream at one time. Apparently the way to improve portion control is to OD on it. 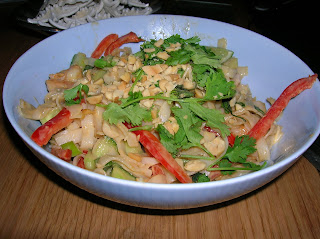 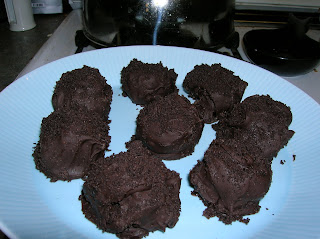 Oreo Truffles (from Chomping the Big Apple)
the original recipe made 42 balls, which is waaaaaaay to much for 1 1/2 people (I don't really do chocolate, I somehow am missing the chocolate gene. It's too sweet for me.) So I cut it in half, and maybe made the balls a little bigger, because I ended up with about 17.

CRUSH 4 of the cookies to fine crumbs in food processor; reserve for later use. Crush remaining 18 cookies to fine crumbs; place in medium bowl. Add cream cheese; mix until well blended. Roll cookie mixture into 24 balls, about 1-inch in diameter.
DIP balls in chocolate; place on wax paper-covered baking sheet. Sprinkle with reserved cookie crumbs.
REFRIGERATE until firm, about 1 hour. Store leftover truffles, covered, in refrigerator.
Posted by That Girl at 8:36 AM