Okay, the easy part is over.  You've had the baby and made the first introduction.  Now comes the sticky part - the time when the older child realizes that attention stealing newer model isn't going away.

This is the time of tantrums, where you become quite familiar with the idea that "negative attention is still attention."

I had a bunch of friends who already had second children (including a mother who had two kids).  I take no credit for the advice below, but I will say I followed it with much success, so I'm sharing it.

The key to all of these is to make sure the older child doesn't feel neglected, or like the baby is more important.  Because then comes the resentment and the acting out.

* The baby is not precious.  This one was from my mom.  Too much "be careful" "don't touch the baby" or that ilk makes the older child feel like the parents care more about the new baby.  Like the new baby is more special, or deserves more protection.  Babies are really very durable, so we allowed touching, holding, hugging, and all that behavior without saying boo.  And when Thatkid did something that could potentially hurt, we didn't make it about the baby, but about life in general.  "Hey, don't poke him in the eye!  You wouldn't like to be poked in the eye, right?" 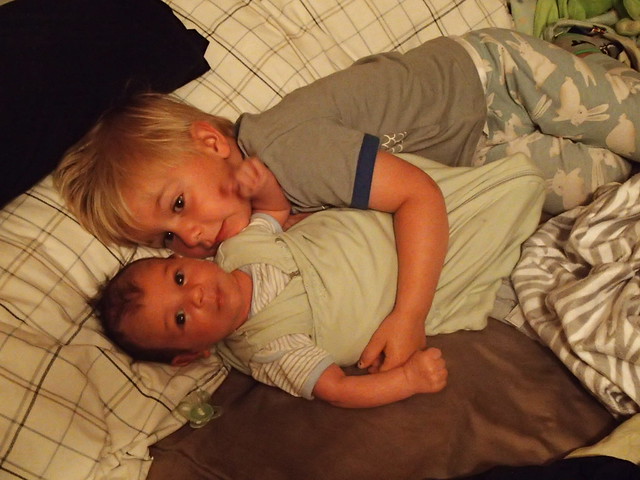 * Vocalize the same phrases to the baby that you do with the older child.  There will be times you can't get to the older child because you're involved with the baby.  But there will also be times when you can't get to the baby because you're involved with the older child.  Now, obviously the baby doesn't really understand anything you say, but the older child will.  So I will often say "One moment Thatbaby, I'm helping your brother right now."  or "Listen Thatbaby, you have to wait your turn, it's not all about you."  This helps the older child feel like they're not the only one being made to wait.  Lately I've had to tell Thatbaby "We don't pull hair" or "Don't hit your brother,"  even though at 3 months he can barely control his movements, let alone purposely try to harm Thatkid.

* Babywear!  Okay, this one is mine.  Wearing Thatbaby meant that I could really cater to Thatkid.  Play in the backyard, go on field trips, tie shoes, and basically be accessible.  Because there is nothing more destructive than a bored toddler. 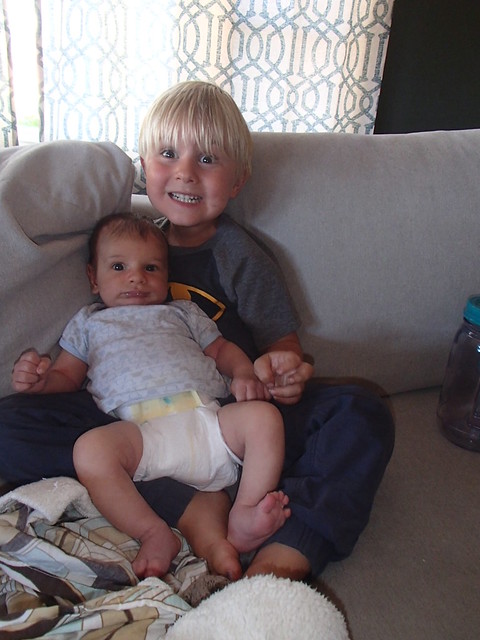 * It's never the baby's fault.  This is especially important when those tantrums and bad, attention seeking behavior surfaces.  Whenever you're chastising the older one, give it a reason other than the baby.  So no "be quiet the baby's sleeping"  just "hey let's use our inside voices."  That way the older kid doesn't feel like s/he keeps getting in trouble because of the baby.  If you have another adult handy, this is an excellent time to make use of them as a distraction.  That way you don't have to yell at the older kid, the distracting adult can just take them out to play, or grab a bunch of legos to "build together."  If you don't have a second adult handy, then set up your own distractions.  Put a big bin of blocks wherever you spend the most time (or in every room, if your kid is like mine you have plenty of legos/blocks/etc.). When s/he starts doing something undesirable, ask him/her to build you the tallest tower s/he can, which will keep him occupied. Or something similar that would work for your kid and what s/he likes to do.

* One on one time!  From the time Thatkid came home from the hospital, Thatboy was in charge of bath and bedtime.  I always use that time to get dinner ready for the next day.  Once Thatbaby came home, this became our special time.  Thatboy took over putting Thatbaby to bed, while Thatkid and I did dinner, bath, and bedtime together. Which means every night Thatkid and I had dedicated time together.  He also got lots of one-on-one time with Thatboy as they'd run errands together or go out and grab frozen yogurt. 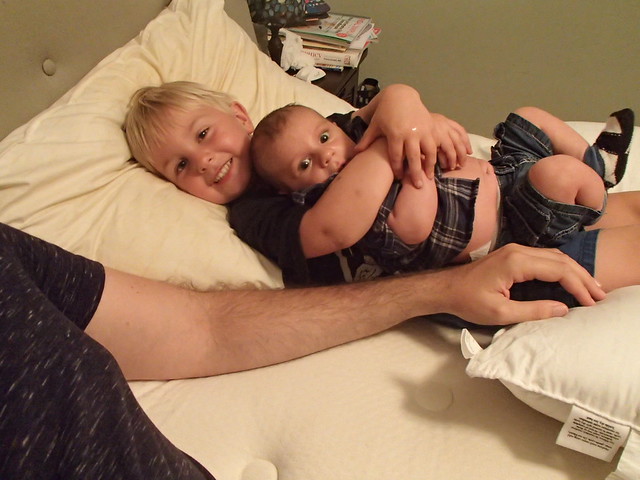 * Help make your older child self-sufficient.  Because there are times you just can't be there for them.  For us, I let Thatkid know that I would always put his needs first EXCEPT when I was nursing.  So he knew that he could ask me for things any other time, but if I was nursing, he'd have to wait.  So before I would nurse, I would set him up with something to do. Coloring, beads, a puzzle, a snack - so he has something to do while I'm occupied. I bought a bunch of $1 crafts from Michaels that worked great for this.  My hospital also recommends nursing with one hand, while you use your other hand to read a story to your older child who can cuddle up next to you.  I also created a "snack bucket" for Thatkid which had individually portioned bags of raisins, graham crackers, crackers, applesauce, cereal bars, granola bars, etc.  And he knew that he could help himself to those whenever he wanted, without having to ask me. 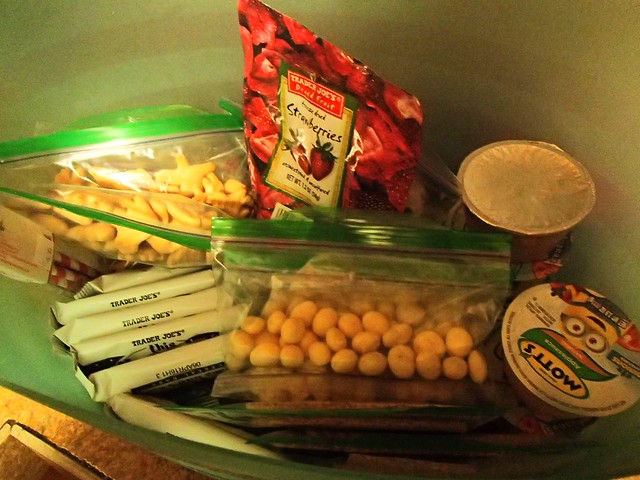