A Homemade Life: Radishes and Butter with Fleur de Sel 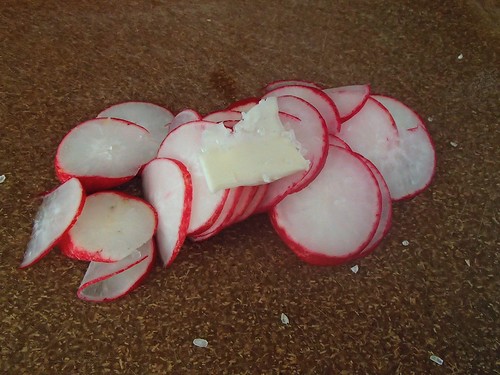 We change so much as we grow.  Of course we recognize it in ourselves, but I am most fascinated in watching it in my children.  They're like my own little science experiment.  I never cease to be amazed at their progress, their growth, when certain attributes come in to play.

An example of this is our most recent trip to Sea World.  When we were there earlier this year, Thatkid was going through a phase where he was unsure of himself, and intimidated by so many things.   But when we went at the end of the summer, it was like a completely different kid.

We started at the entry way with the touch pools.  Last time he had no problem with putting his fingers in the feeder fish pool - although the few months difference has greatly expanded his patience, as he was much more able now to stand still long enough for the fish to come "kiss" his fingers.  But the shark tank was far too scary for him.  Despite my constant assurance that these sharks wouldn't bite.  Now look at him!

Almost as though to prove a point to his slightly younger self, this time Thatkid had to touch every shark in the tank.  Every.Shark.

Unfortunately, since it was just me and the two boys, this was a ride-free visit.  Thatkid took it in stride and instead spent the time on the play structures.  Last time he lasted about .2 seconds before having to exit the bounce house screaming and hysterically crying because he couldn't stand up without getting bounced.

This time he stayed in the whole time!


But the biggest accomplishment was the costumed characters.  Thatkid has been terrified of them for years (well as long as a 3 year old can be).  This has involved crying and getting out of line at Disneyland, and hysteria at Chuckee Cheese.  For some reason, this was the day Thatkid decided to get over this fear.

I mentioned that Elmo and Cookie Monster were hanging out in the Bay of Play and we could walk by them far away so he could see them, but they couldn't see him.  But he wanted them to see him.  He wanted to go right up to them and take a picture.  I agreed, feeling fairly confident that by the time we got to the front of the line he'd have changed his mind.  But he didn't.  He informed everyone in line that these were just costumes with people inside.  When we got to the front, Cookie Monster came up to greet him and give him a hug, he shyly asked to hold my hand while he did that, and after that he was good to go.  Walking up to Elmo by himself to give him a hug and then posing with them for pictures.  This picture means so much to me because it as such a turning point for him.  It makes me realize how much he really is growing and becoming independent, overcoming his fears.

We don't stop changing as an adult, although often our changes are more subtle, like changes in taste.  I've discovered so many "new" tastes that I previously was uninterested in.  Like radishes.  Never a fan as a child, in my adulthood I grew to appreciate their spice and bite.  Especially in the summer.  They make for such a refreshing snack.  When I was pregnant I would buy bunches of them, clean them, and carry them around for snacks.  I ate whole bags of radishes in a sitting!

This is a much more appealing way to enjoy radishes.  You really can't go wrong with adding butter and salt to anything, it's my favorite vegetable add-in.  On top of a toasted baguette, it makes for a great appetizer or snack.  Something about biting into the crisp radishes seems like a great way to enjoy the last of these warm summer days. 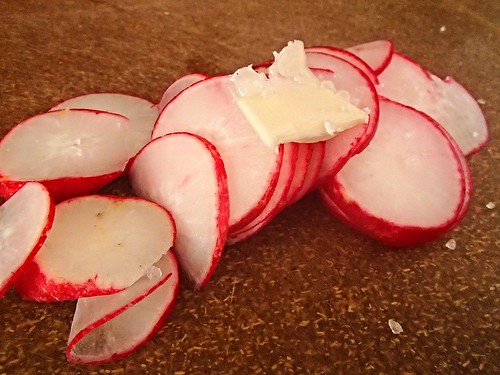 Radishes and Butter with Fleur de Sel (From A Homemade Life)
Baguette
Radishes
Good quality unsalted butter, preferably cold
Fleur de sel, or another crunchy salt
Posted by That Girl at 1:00 AM