A Homemade Life: Sliced Spring Salad with Avocado and Feta 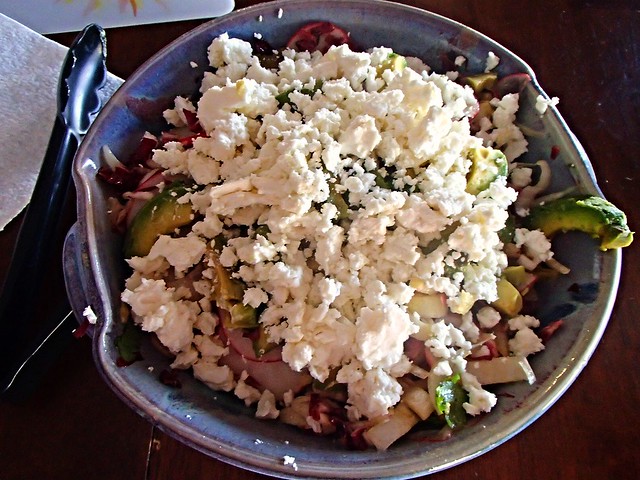 If you do a google train search for "train birthday party" you'll notice a recurrent theme of "choo choo ____ is 2!"  Because for some reason, 1 year olds just love trains.  Well 3 year olds?  3 year olds love super heroes.   So it wasn't terribly surprising to receive a Superhero birthday party invitation from Super Toddler and Super Baby.  Since their birthdays are a month apart, and they're expecting another sibling in November, Super Mom decided a joint party was the thing to do.

The highlight of the party for Thatkid was that his all time favorite superhero in the entire world stopped by to make an appearance. 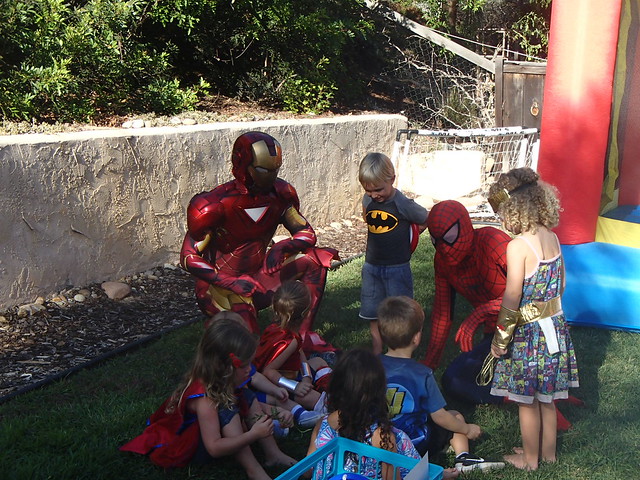 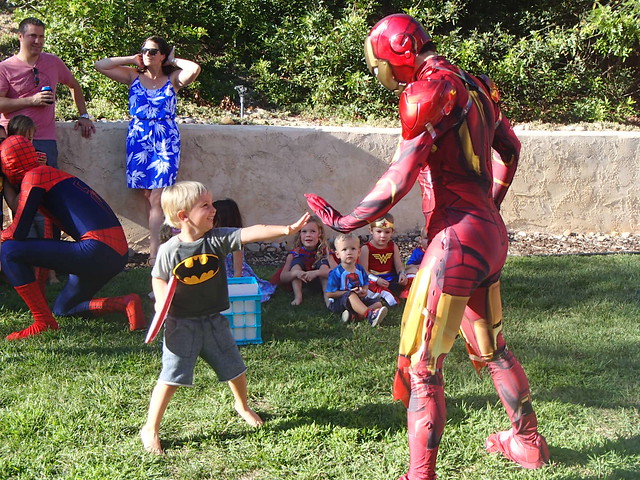 Don't get me wrong, the kid loves all super heroes, and happens to own not one, but two Spiderman action figures (because apparently you need one that talks, and one that doesn't...at least that what he is currently trying to convince me in order to acquire another Thor) 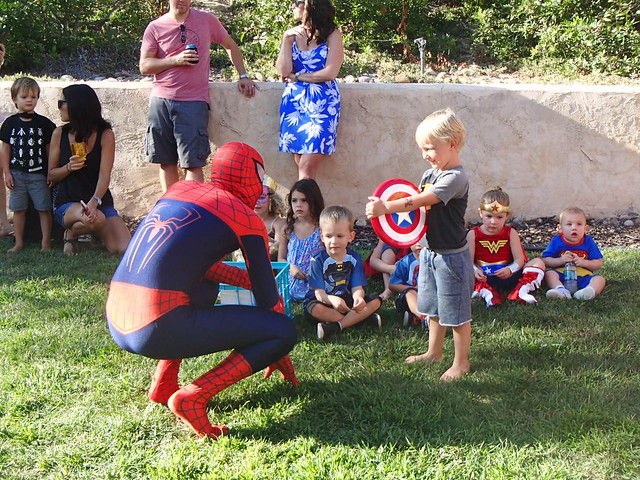 But Ironman has been his favorite almost since he discovered what super heroes were.   Which strikes me as funny, because he's a little too young to see any super hero movies, so I'm not sure how he knows about them, but he does! 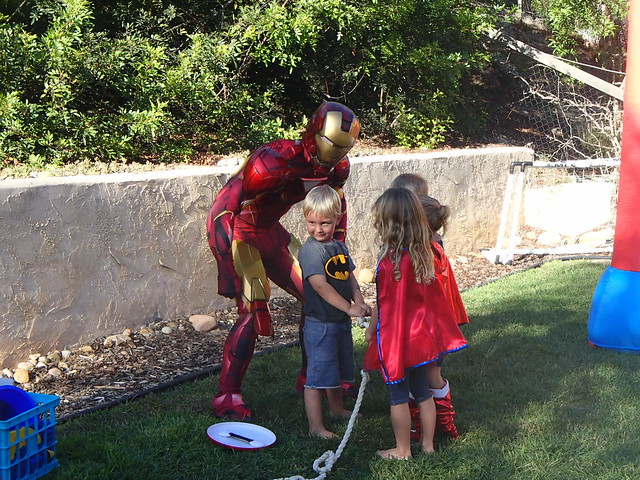 The kids took turns being on Ironman and Spiderman's teams in playing tug of war.  (I think due in part because when they asked "who wants to be on Ironman's team?" Thatkid was the only one raising his hand and jumping up and down) 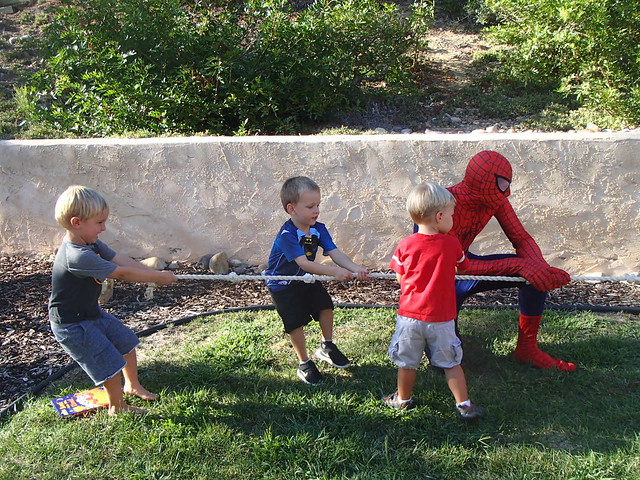 Spiderman and Ironman also led them in a bean bag tossing game. 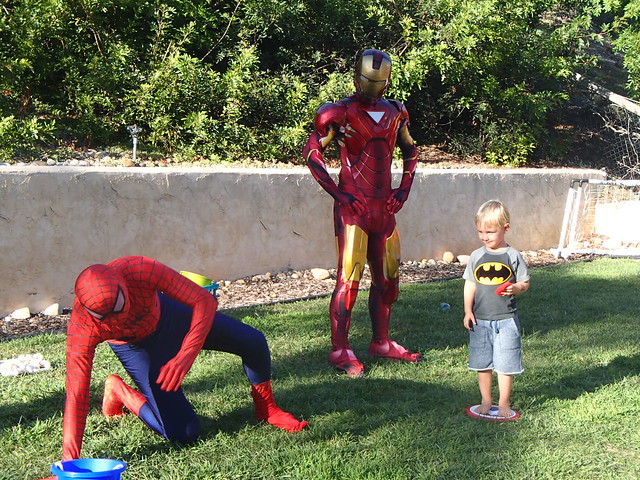 And signed autographs and posed for pictures. 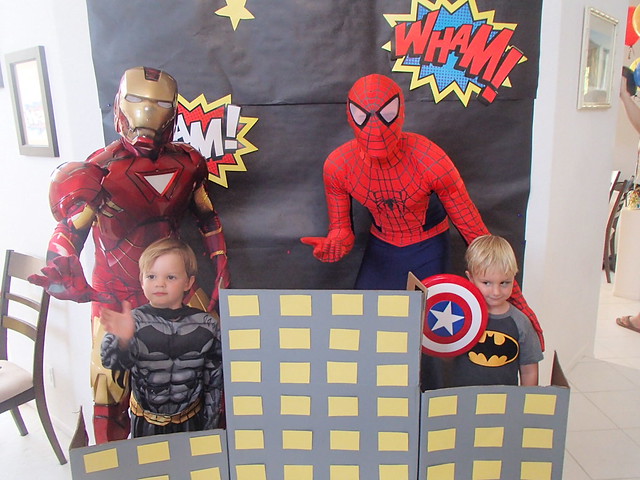 Thatbaby is still a little young for this superhero business.  He's really too young for the swing too.  Either that or he's just totally too cool for both.  Neither held his interest in the slightest. 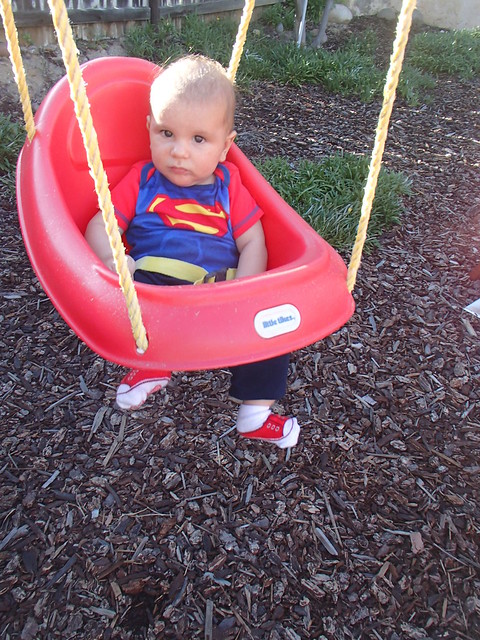 He was much happier shoving his fingers in his mouth.  Because apparently that's what 3 month olds are into. 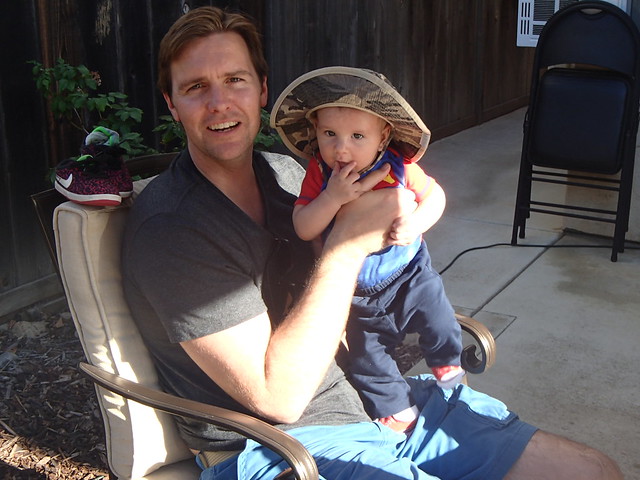 Thatkid is seriously the biggest camera punk.  He begs me to put on a mask and take a picture, then makes this face.  As though the whole thing wasn't his idea.  As though it pains him to take a picture. Or maybe he's just trying to hide his superhero identity. 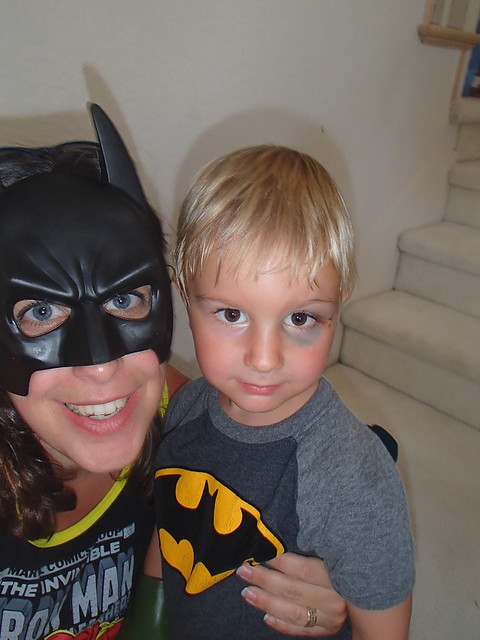 The only problem with the party is that it was roughly one million degrees outside.  Poor Super Mom.  Super Baby was born the first week of September so she doesn't remember being this pregnant during the hottest part of September.  I reminded her that Super Toddler was born the first week of October, so she would have been even more pregnant that September, but neither of us think it was as hot as it's been lately.

We're having a real heat wave round these parts.  That fact, combined with the fact that we're about to lose all the best parts of summer - the produce, has be craving salad like a madwoman.  I want as much greens as I can get my hand on.  I shared this salad with the rest of the family, but I could have eaten the whole thing myself.  It has some of my favorite salad ingredients, namely avocado and feta.  The dressing is light and the "greens" (endive and radicchio) are crunchy instead of leafy, which brings a fresh crispness to the salad. While it's call a "spring salad" I much prefer to wait for the buttery avocado which presents itself in late summer. 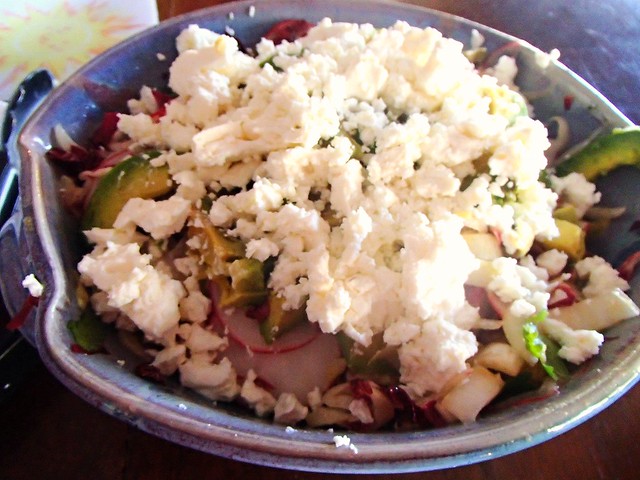