I am officially done with pregnancy.  Our family is complete at four.  I don't really have any regrets or sadness about never being pregnant again, it could be because my last pregnancy was so much worse than my first that I can only imagine any subsequent ones would just continue down that road.

But having been through it twice, I am twice as qualified to share some tips for anyone who is or is thinking of becoming pregnant.  I want to start out with an important note (so important I'm going to obnoxiously caps lock and bold it).  SYMPTOMS (or lack thereof) ARE NO INDICATION OF A HEALTHY PREGNANCY.  I'm emphasizing this because so many people rely on symptoms.  To determine they're pregnant before testing or to determine whether they're miscarrying.  Some women never experience stereotypical pregnancy symptoms and have perfectly textbook pregnancies.  Some experience every symptom in the book and end up losing their babies before ever getting to meet them.  Symptoms come and go and come again, without any rhyme, reason, or relation to that growing bundle of joy.

That being said, here are my 9 tips for dealing with some common pregnancy symptoms:

I put this at the top, because it's one of THE most stereotypical pregnancy symptoms.  There are so many varying degrees of this, that I'm hesitant to even give advice.  With Thatkid I didn't even have a minute of nausea.  With Thatbaby I was sick for weeks and weeks.  Not throwing up, just constant, all day nausea.  What helped me most with that was constantly eating.  Weird, right?  Sick to your stomach?  Fill it up.  This can be dangerous, so I tried to keep it healthy by making a big (giant) bag of airpopped popcorn every morning and keeping it with me throughout the day.  Also?  Ginger beer.  Every night as soon as I'd get home from work.

Often when you're first pregnant, you don't want anyone to know.  Some people share early, others like keeping that secret to themselves.  I was in the latter category.  The problem is, that early pregnancy is often accompanied by bloating, which makes you feel like everybody knows.  Your clothes don't fit right, you don't feel right.  I have no tips for not bloating.  Not a one.  But I do have a solution to the clothes not fitting and keeping your secret a secret - The Bella Band.  I know, I know.  I talk about this all the time.  You'd think they're paying me.  They're not.  It's just a great product when it comes to letting you walk around with your pants undone all day.

There's a lot of unknown when it comes to pregnancy.  There's also a lot not in our control.  If you're already prone to anxiety, this is going to test your limits.  Is everything okay in there?  As I mentioned earlier, this is one of those times people start worry - "I'm not throwing up, something must be wrong" or "My breasts were sore yesterday and not today, there must be something wrong."  Later on the pregnancy you start analyzing and over analyzing every little movement, or lack of movement.  Then there's the anxiety related to childbirth.  It is 100% completely normal to have these doubts and fears.  Does that make you feel better?  Maybe a little?  The only thing you can do is validate your feelings and tell yourself that if things were wrong, you'd know.  Contact your doctor with major concerns, keep up with your kick counts so you can be aware of when your kid is usually active, and then do something to take your mind off it.

When I was pregnant with Thatkid, about the day after implantation, before I even knew I was pregnant, Thatboy remarked my breasts were spilling out of my bra.  Breast growth happens and it happens quickly!  Don't be a bra martyr.  You should always wear a bra that supports the girls.  But obviously you don't want to spend $900 on bras you're only wearing a couple weeks.  So be smart about it.  Get measured and buy some inexpensive bras (keep your eye on sales!).  Repeat every time you grow out of your bra!   About 36-37 weeks, start thinking about nursing bras.  There is no way to predict how big your breasts will get after birth, so don't waste money on bras with cup sizes that you may end up returning when your breasts don't fit in them.  Instead grab some "sleep bras" which come in S/M/L sizes.  About 2 weeks after you give birth, your breasts will have regulated a bit and you can go get measured for a nice, supportive, nursing bra.

Can I tell you my least favorite pregnancy advice?  "Sleep while you can!"  This is awful, because sleep isn't like money in a piggy bank.  You can't stockpile it.  As much as you sleep when pregnant isn't going to make it any easier after the baby comes.  Plus, it's hard to sleep when pregnant!  You're uncomfortable, you have to pee all the time, and I was lucky enough to have pregnancy insomnia.  I found exercising regularly helped me not feel tired all the time.  A body pillow helped with the discomfort.  And I stopped fighting the insomnia.  If I wasn't tired, I didn't sleep.  I'd read, or get up and do things.  Might as well be productive!  Also?  Naps when I could.  I wasn't sleeping at night, but I could get a great little nap every night after I finished dinner before it was time to tuck Thatkid into bed, so I slept then.  And weekends I would nap with him.

Digestion slows down during pregnancy, and that definitely adds to the bloating and discomfort of pregnancy.  Running really helped me with this.  (It helps me when I'm not pregnant too!)  And eating good anti-constipation foods, like fruit!  Especially dried fruit.  A daily handful of dried prunes or apricots help keep things regular.


Water is SO important.  During pregnancy, during non-pregnancy.  Most of us don't drink enough.  When you do drink enough, the trips to the bathroom become a pretty regular occurrence.  I don't think there's really anything you can do to avoid having to go to the bathroom, short of not drinking, which I don't recommend.  But I will say that I found it most helpful to take a bathroom trip every hour.  I actually combined it with my water intake - 1 hour to finish my water, at the top of the hour, I'd finish whatever was in my glass, make a trip to the bathroom, refill my water, and start all over again.  It was almost like a game.

For me, this was only an issue with my second pregnancy, but whoooo boy, did it kick in early and hard!  Prenatal pilates really helped with this.  It involved a lot of stretching, which made it easier to move and sit.  Of course, once I hit 38 weeks, even that didn't help, but childbirth totally did.  So when you're at your wit's end, just know that there's a light at the end of the tunnel. 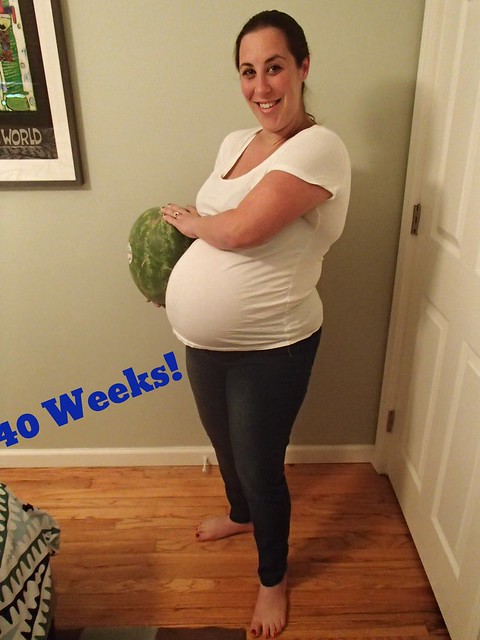 No one loves the weight gain associated with pregnancy, but everyone feels differently about the physical changes.  Some women embrace it, but others hate the lack of control they feel.  It can be really hard.  And my heart goes out to those women.  But it is so important to remember that this is not forever!  Your body may seem foreign for a couple months, but after that, it will be yours again.  And even if you hate the way you look - document it!  Not just for you, but for your child, because there's something so fascinating about seeing yourself before you're born!  But also, once you're no longer in "that body" you might not mind seeing it as much.  Kind of an out of body experience.  After my first pregnancy, I also came upon the realization that I should have worn the same outfit each week so I could really see the change.  Which is what I did this time around.  But if I had been smarter, I would have picked a black shirt instead of a white one, or at least something dark enough to hide the maternity panel on most of the bottoms!
Posted by That Girl at 1:00 AM