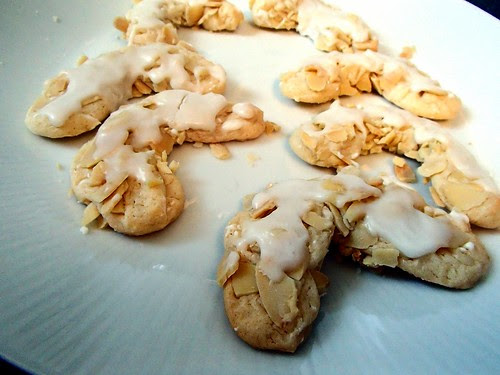 Prior to Thatbaby, Thatboy and I had our Palm Springs weekends down to a science.  Lots of pool time, shopping, and dining out at nice restaurants.

This trip, catered to Thatbaby, meant we didn't stick with our usual food choices (with one notable exception).  Since we were going to be out at zoos and museums during the day, we decided to pack lunches, so we wouldn't have to worry about overpriced crap.  Which meant our first stop of the weekend was Trader Joes.  (This was also good so I could load up on cereal bars - which is the second thing out of Thatbaby's mouth when he wakes up- and fruit for snacking.)  I figured there would be a restaurant in the same shopping center, and I was right!  So we found our first breakfast at The Palms Cafe. 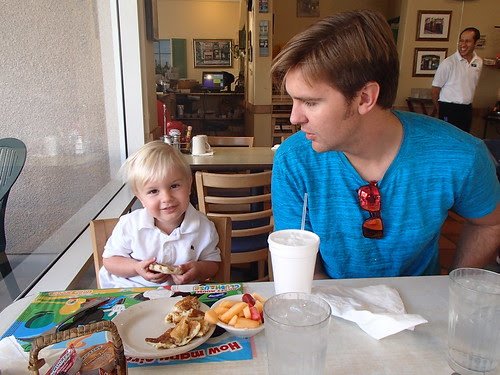 The great thing about most breakfast places is that we don't have to order Thatbaby his own breakfast.  Portions are always so large he can share ours.  My omelet came with a side of pancakes and fruit, and those sides became Thatbaby's breakfast.  We don't do pancakes very often, so they're a definite favorite when we eat out.

For dinner, Thatboy and I were debating between a couple of easy sounding, toddler friendly options and decided to give La Perlita a shot. 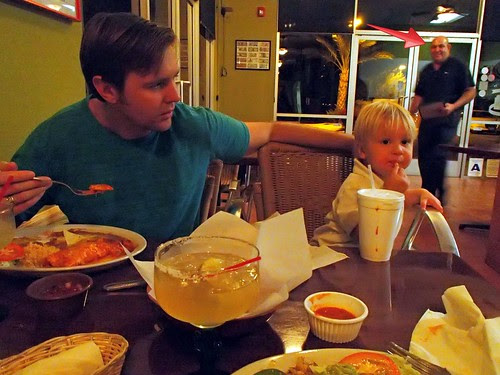 This small, unassuming, family run restaurant is located in a strip mall, which was deserted on a Saturday night.  But don't let that dissuade you.  It really is a "little pearl" in the desert.  The food was wonderful.  Thatboy had a relleno and enchilada he raved about.  I had my typical fajitas, and Thatbaby had a quesadilla - which he had been talking about all evening in anticipation.  It wasn't just the food that impressed us, but also the atmosphere.  The man in the background is the owner, and he personally spent a great deal of time ensuring Thatbaby's happiness and providing entertainment in the form of "magic tricks" and masks.   He spoke with us about our meals, what brought us in, and a little about the restaurant itself.

The one restaurant we knew we would continue to return to, regardless of Thatbaby's preferences, was Norma's.

This is one of Thatboy's favorite restaurants, so it stays on schedule.  Thatbaby is a big fan for a couple of reasons.  Firstly, because as soon as you're seated they greet you with a smoothie shot.  Thatbaby is a huge fan of smoothies.  So much so that we ended up getting him a full size one to work on.  Thatbaby also loved sharing Thatboy's chocolate and peanut butter waffles.  But I think the highlight of breakfast at Norma's for Thatbaby was being able to run around and explore the grounds. 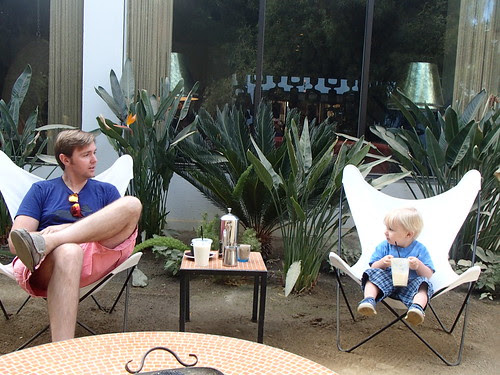 With hammocks, chairs, swings and fountains, he found plenty to keep him entertained while Thatboy enjoyed his coffee.

We saved the "most fun" restaurant for our last night.  And it lived up to all our expectations.  Jackalope Ranch is more like Disneyland than a restaurant. 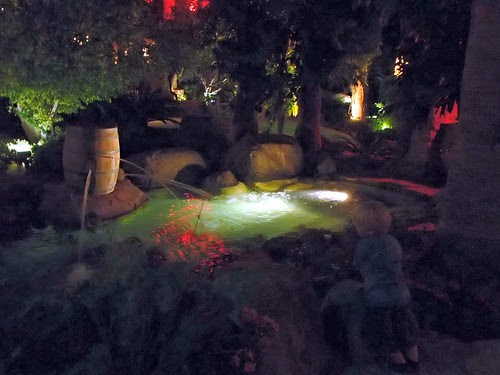 To be fair, the atmosphere almost reminds me of a restaurant IN Disneyland - like the Blue Bayou. 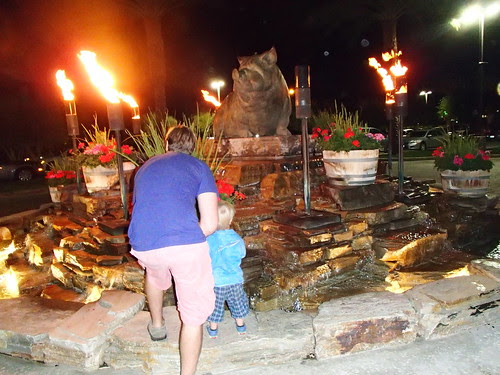 There is something in every corner of the space to look at and distract young diners. 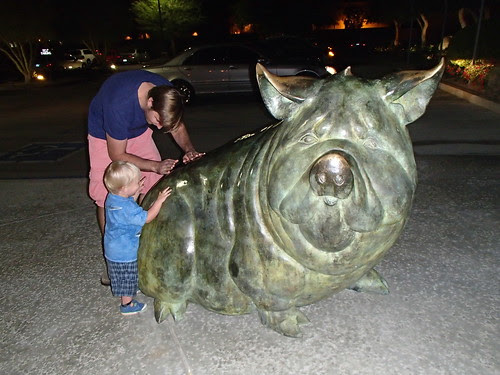 Thatbaby was so happy munching on his quesadilla and looking around, that Thatboy and I were able to have a full, uninterrupted conversation at dinner.  Which hasn't happened since we started dining with Thatbaby at 6 months. 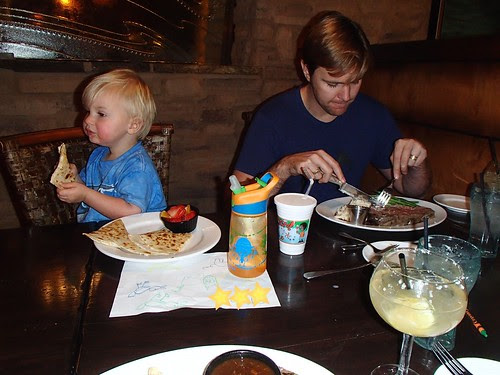 So our dining experiences may not be what they once were, but we're finding new and different ways to enjoy ourselves when going out.  One is definitely to manage expectations by catering a bit to our youngest dining companion.

In truth, we often opt for the path of least resistance when it comes to Thatbaby.  It's not so much a matter of spoiling him, but setting him up for success.  Like instead of fighting him when I'm in the kitchen, I find ways to have him help me.  Lately he's been helping with cookies.  Which means I'm usually making easy recipes with few steps and ingredients.  He has become the master of turning on and off the Kitchen Aid.  And there is nothing he likes better than "dump[ing] it out" with the ingredients.

These almond crescent cookies are one of those few steps/ingredient type recipes.  Almond paste is one of those ingredients that needs very little else.  Adding more almonds only heightens the great flavor.  I made a little glaze by mixing confectioner's sugar and water, but they are just as tasty without. 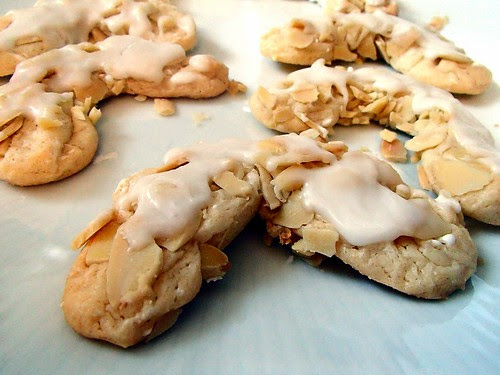