I used to make pork a lot more often.  It's so easy, and a tenderloin is the perfect size for our little family.  Before Thatbaby was born it was just a smidgen too big, but now it serves the three of perfectly.   We're at the Goldilocks stage of pork tenderloin.

We were out to dinner not too long ago when I ordered a pork chop and I realized it was far too long since pork has graced my table. It was time to make a revival.  Especially since pork seems like such a great fall food.  It pairs well with other fall flavors like apples, cinnamon, and maple.  This is a really basic maple glaze.  As a syrup, it's already a little glazey even without making a reduction of it.  When roasting meats, I like to throw some potatoes on the pan for an easy side.  Because let's face it, I'm fairly lazy when it comes to side dishes. 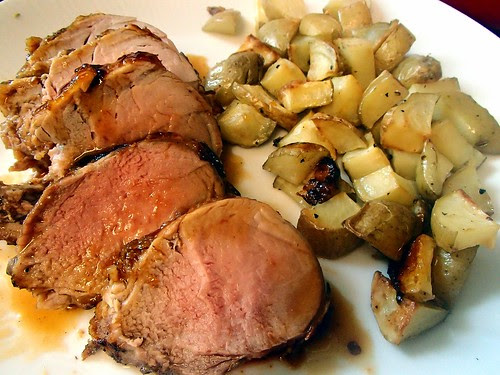