Good Eats in the Desert

Well we certainly are skipping all over the calendar here, aren't we? Now that Valentine's Day is over, I can fill you in on the meat and potatoes of our Palm Desert trip - the food and the shopping.

Thatmom has always loved family breakfasts where we gather round the table and spend the entire time laughing. What can I say? I have a funny family and we delight in cracking each other up. I knew I had to find a great breakfast place for us. I'd heard Norma's was THE place to go for breakfast. A little piece of LA in the desert.

Norma's is housed in The Parker - which is completely hidden in Palm Springs. Thatboy fell in love with the decor and is dying to go back and stay there. 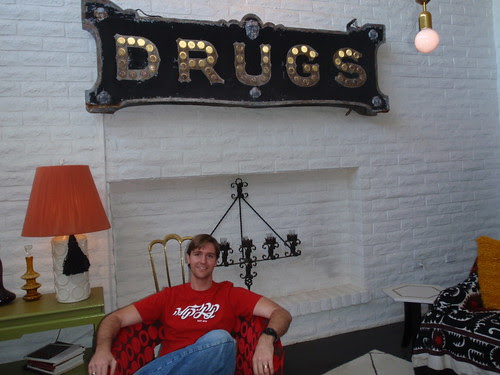 Even Thatmom was a fan of the modern, eclectic design. 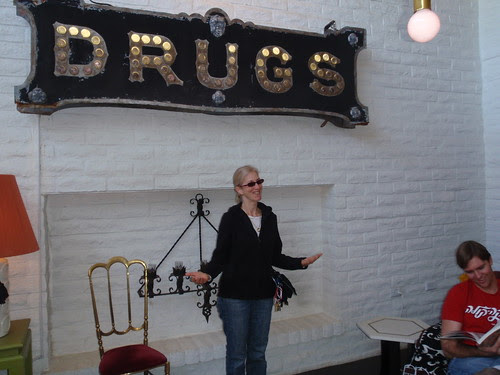 The trick with Norma's is to make reservations if you want to sit outside. And you want to sit outside. That's where the cool people sit. I know the people out there were cool, because the guys next to us literally TOOK OFF THEIR SHOES at the table. We didn't have reservations, but we were just so gosh darn cute, they sat us outside anyway. Thatbrother claims it's probably due to UDubb classing us up a bit. He's probably right. We kept our shoes on.


Our waitress stopped by to introduce herself and drop off gigantic french presses of coffee at our table. She also brought us all samples of their smoothie of the day - blueberry...something. Because it was in a shot glass, Thatmom shot hers while we all sipped ours. At which point she mentioned she'd never actually done a shot before. This will be important later. 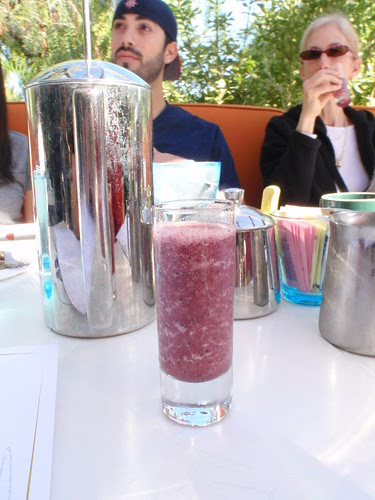 Thatbrother ordered the Nova Smoked Salmon Ring. You can tell this is his meal, because HELLO THATBROTHER'S FINGER! It was lox and eggs topped with creme freche and caviar. He thought it could have used some onion, but otherwise was very pleased. 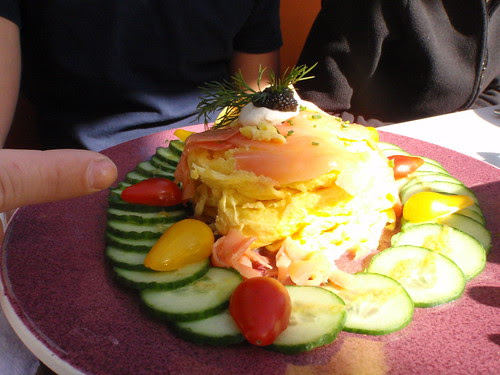 UDubb and Thatmom both ordered make your own egg white omelets. The potatoes they came with were so good, they were passed around the table so everyone could enjoy them. 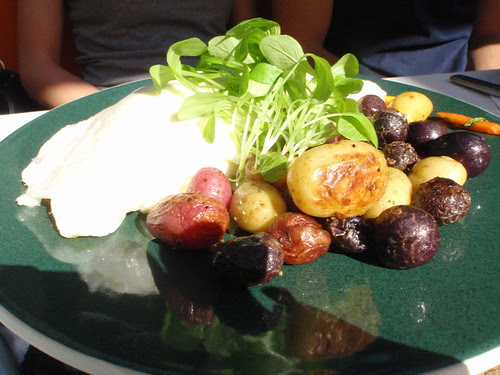 Thatboy didn't quite understand we were having breakfast, so he ordered dessert. The PB&C Waffle 'Wich - Peanut Butter and Chocolate that is. You all remember that Thatboy doesn't like peanut butter and chocolate right? I'm going to remind him of this breakfast next time he makes that claim. It was DELICIOUS, but he couldn't even begin to think about finishing it. 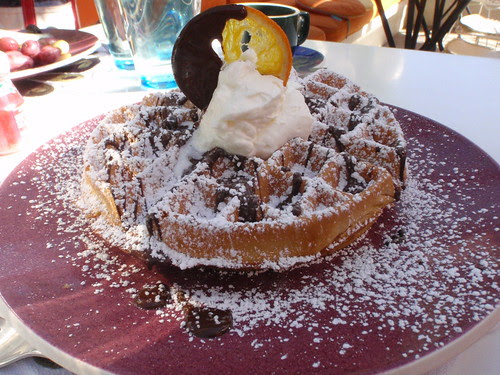 I had the Huevos Rancheros (raise your hand if you're surprised). It was totally different than any huevos rancheros I've ever had. Instead of being served over a tortilla, it was served over a bean and cheese quesadilla - which made it very easy to share. 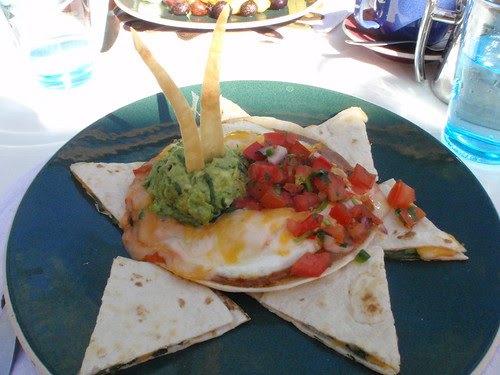 And because we're big on fruit, we ordered a fruit plate for the entire table to share. Served in a watermelon ring! 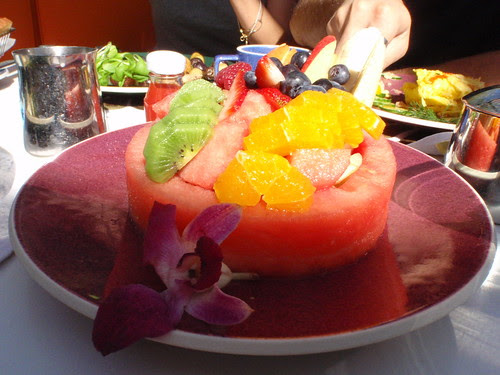 After breakfast we headed to the outlets. My favorite part of Palm Springs. We were there for 6 1/2 hours. I love Thatmom and UDubb and their incredible endurance. And the boys were such good sports! They found ways of entertaining themselves. 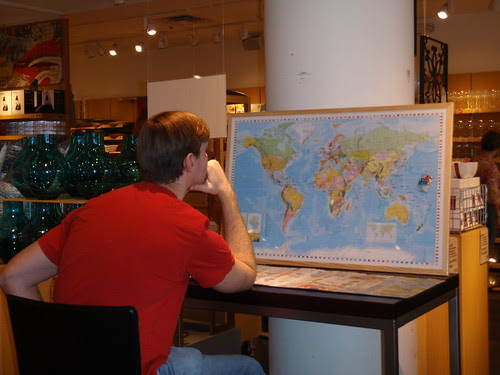 We ended up with a disgusting number of bags in the car, single handedly reviving the economy! My best buys include $30 Columbia snow pants for skiing, patent leather ballet flats, Kate Spade sunglasses (which will be revealed later), and this ADORABLE little purse.

After all that shopping we had worked up quite the appetite. So we headed to dinner. Since we didn't get pizza at Matchbox last time we came up, we decided to try again this time. Thatmom wasn't all in at first, but after we ordered a round of shots for the table all of a sudden this became one of the best pizzas she's ever had. (Told you that shot thing would come back to haunt you)

Thatbrother ordered a beer sampler, picking 6 different beers from the menu. I have know idea what he got, except the St. Bernardus ABT 12 I was telling you about. Technically he's the discoverer. Good thing he shares. 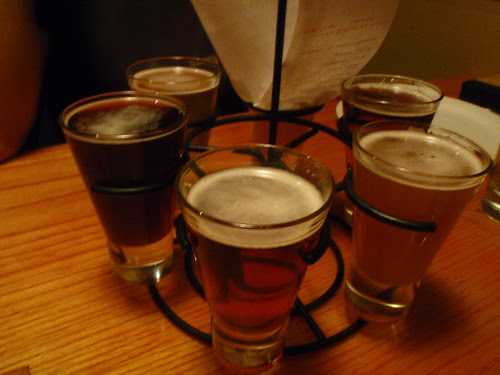 Thatboy ordered a Manhattan. It's his new going out drink. 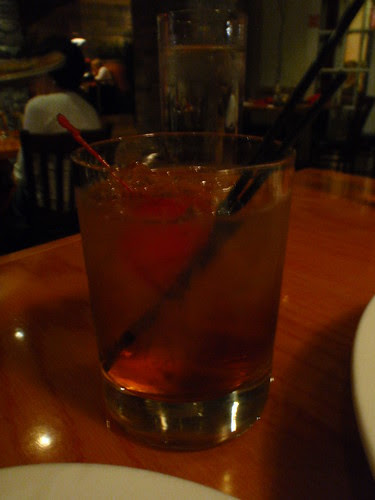 I ordered the Now and Later - which tasted just like candy. 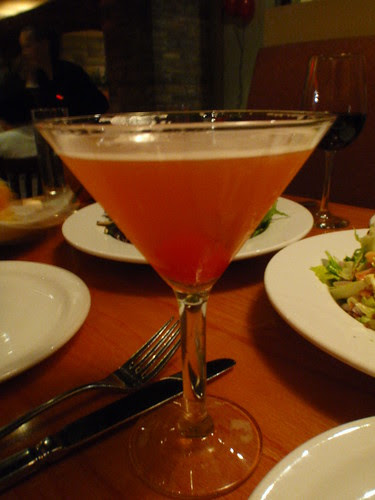 We decided to order some pizzas and salads for the table to share. We're good sharers. We had the chopped salad, which was good, but would have been better without the pasta in it. 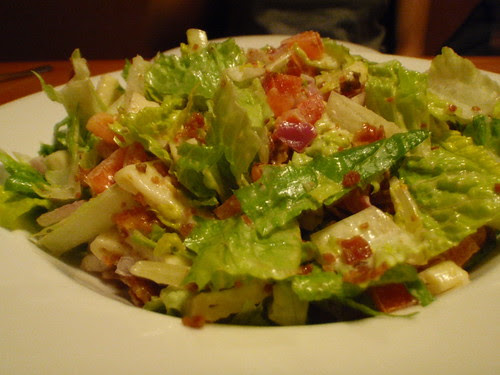 The apple and pear salad was a huge hit. Thatbrother especially liked the cinnamon apple chips. 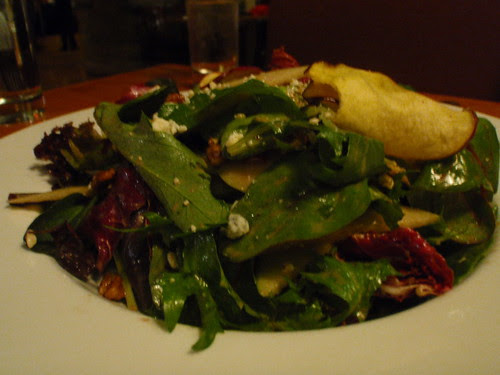 Thatboy spotted heirloom tomatoes on the menu and we had to order them. I was happy because it came with mozzarella. And tomatoes and mozzarella are even better than peanut butter and chocolate. 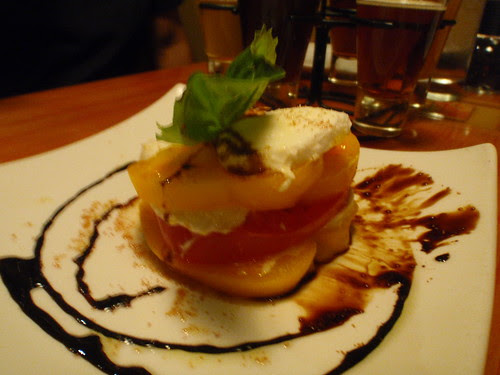 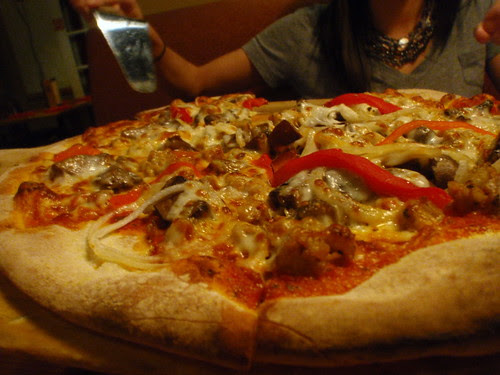 We also got the prosciutto white - with garlic, ricotta, kalamata olives, and of course, prosciutto. Perfectly salty. 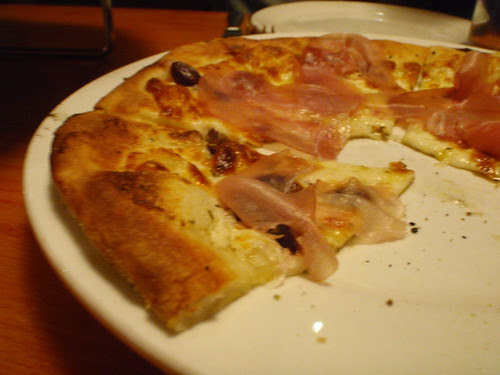 And then came the most embarrassing part of the evening. We headed over to Yogurt on Tap. Thatboy made himself a 2lb yogurt sundae. He was so proud of himself. I was less proud. I was even less proud when we stopped off at the supermarket to pick up some water and a group of people pointed at us and said "Look! There's the guy with the 2lb yogurt!" I wanted to crawl into a hole. 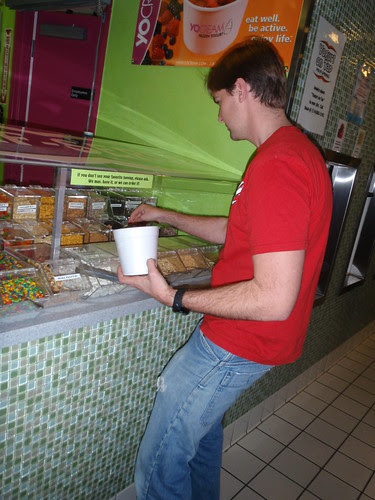 Then came sleep, glorious sleep and the race I already told you about. And then we were starving. Beyond belief starving. I told you this post was going to be all about food! So we headed to Armando's for some Mexican since Thatbrother was jonesing for a burrito. And that's where I came across this beauty. 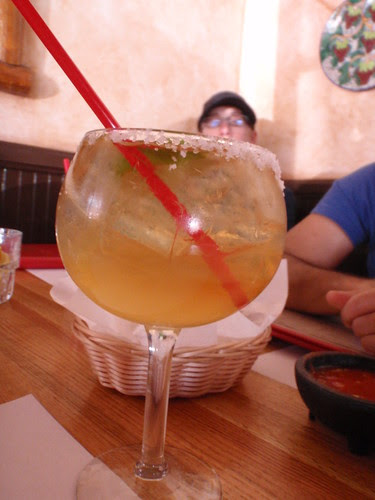 She's a cadillac margarita. Thatboy, UDubb, and I each had one. And there is very little I remember about lunch after that drink. I remember lots of laughing. And then all of a sudden I realized we were all done eating, and I hadn't taken a single picture of the food!

Thatmom had the cheese quesadilla. Which is one of my favorite lunches. 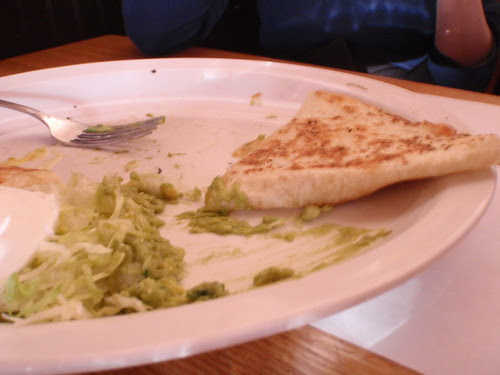 UDubb had three different tacos. I don't know what they were. I doubt she remembers. I do know that we liked the fact they were all individually wrapped. Drunk people like things like that. 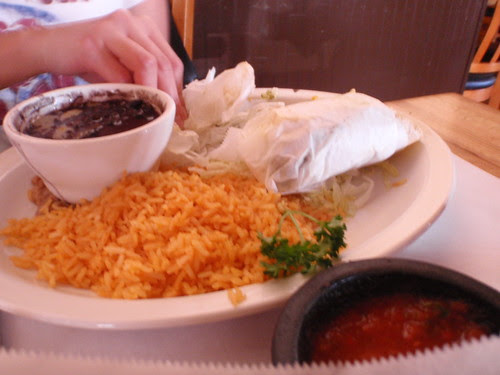 Thatbrother had a fajita burrito. Look how blurry my drunk picture is! 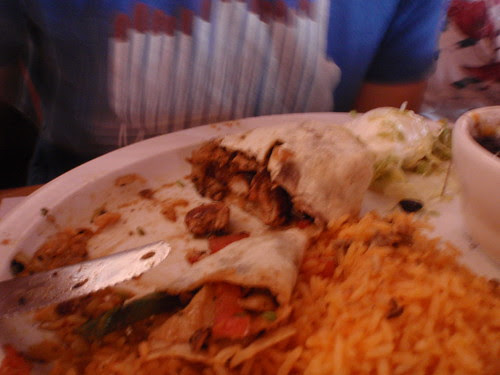 Thatboy had a taco and an enchilada. I don't remember them being so great. But apparently the beans were great, cause they're all gone in this picture. 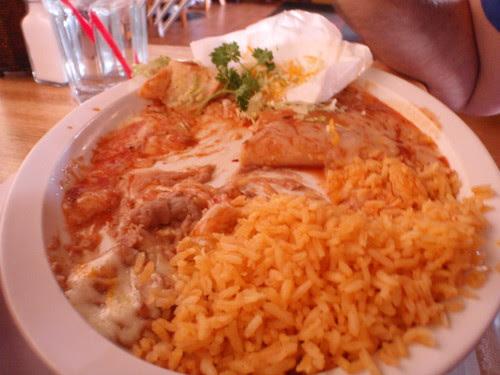 I had the carnitas burrito. It was really good. Even Thatboy thought so, so I know it wasn't just me. 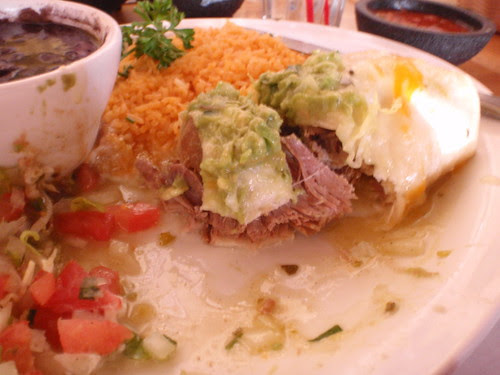 After lunch we were all so ummm...not fit to be driving...so we did some more shopping. I got some of my favorite tees from GAP because there was a sale. So it was a pretty successful trip for all involved. We ate, we shopped, and we laughed. We're a pretty good group if you ask me!
Posted by That Girl at 6:10 PM