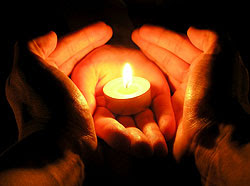 Yahrzeit is the commemoration of a death of family member. Today is Thatdad's Yahrzeit. It's based on the Jewish (lunar) calendar, which is why it's a little earlier than the date of his death. Which means I get a little taste of how I'm going to feel next week.

Yahrzeit is commemorated by lighting a candle and reciting a prayer. The candle burns for 24 hours. Thatdog didn't quite understand what was going on, but he saw the candle, and heard us praying and figured it must be Channukah. He sat patiently beside us waiting for us to finish so he could get his treat.

I'm dreading next week. I've actually been dreading this entire month. Last month was really hard on Thatmom. She characterized it as feeling like she was losing him all over again, because starting in February she wouldn't be able to say "Last year at this time Thatdad and I were....." I didn't really get it. I didn't feel the same way. But this month I'm overcome with emotion. I'm crying at the drop of a hat. Simple things that wouldn't normally set me off send me into hysterics. Thatboy has threatened to call Kay Jewelers and ask them to stop showing commercials of little old men and women. In truth, I don't think he really knows what to do with me. Other than watch and worry.

I can only imagine it's going to get worse over the next week. Valentine's Day weekend was the last weekend Thatparents had together. Thatmom can give details of the day almost minute by minute, not realizing at the time it would be the last weekend they spent together. This weekend is going to be hard. Even though we're spending it together, I'm pretty sure it's going to be difficult for all of us.
Posted by That Girl at 9:06 PM