Everyone is beautiful at the ballet

Earlier this week Prez emailed me asking if there was anyway I might be interested in going to see Swan Lake with her. Prez isn't a huge theater person, but she comes from a family of musicians, so ballets are right up her alley because she's so familiar with the music. Swan Lake was one of her favorites, but she'd never actually seen a production. Neither had I. So I agreed right away. "I'm assuming Thatboy isn't going to want to come with us?" she emailed me.
"You'd assume wrong. I'm pretty sure he'd LOVE to join us, but do we want to make this a girl's night, or have him come along?" Prez said to bring him since it had been ages since she'd seen him. I think there's a pretty good chance that Prez has actually known Thatboy longer than I have. You see, back before he ever laid eyes on me, Prez and I had a mutual friend who had a thing for Thatboy. I even asked her if she was okay with me pursuing the man who would be Thatboy. She gave me her blessing, wishing me good luck because Thatboy was completely oblivious to females interested in him. She stopped speaking to me when Thatboy and I began dating.
And so the three of us bundled up in the cold rainy weather and headed out to see Swan Lake last night. The production, performed by the Moscow Festival Ballet, was phenomenal. Beautiful jumps, twirls, and lifts. Sculptured legs, glutes, and arms that seem to go on forever. And of course, an insane amount of tulle and glitter. Prez didn't know the story at all, and I had a very vague recollections. So as an aid to all my non-ballet goer readers (both of you), I have decided to include a very brief plot break down so you can all talk about Swan Lake at the next gala you attend and wow them all. We open on a party. At least I think it's a party because there's lots of people dancing around. But since it's a ballet, there's no talking. So it could just as well be a protest, or an audition for So You Think You Can Dance. See the lady with the drapes on her arms? Maybe she's Mary Martin?

See this guy? He's the Prince. You can tell because he jumps higher than any of the other dancers. That's how you know he's supposed to be good, kind, and gentle. Our hero.

The prince leaves his party and goes off all mopey in the forest. Seriously mopey. You've heard the music, right? He runs into a bunch of girls with feathers in their hair and white tutus. I'm pretty sure they're supposed to be the swans you've heard so much about. They dance together and the Prince falls in love with the skinniest, bendiest one with the longest arms and the crown.

Can you blame him for falling in love? Look how she bends!

And look how her friends dance!

But all is not happy in Swan Lakeland. In addition to the fact that the girl is actually a swan, she's also under the spell of an EVIL sorcerer. You know how I know he's evil? He's wearing all black. And a cape. And a shitton of glitter. Seriously, he is the most FAB-ulous villain ever.

Act 2 begins with a scene from the bachelor. Four princesses compete for the Prince's bouquet of flowers. But none of them are as skinny and bendy as the Swan girl. So no one gets the flowers. It's the saddest rose ceremony ever.

But then the evil sorcerer shows up with a girl who looks JUST LIKE the swan girl! Except she's dressed all in black. And the prince didn't read my earlier point about black costumes = evil character. 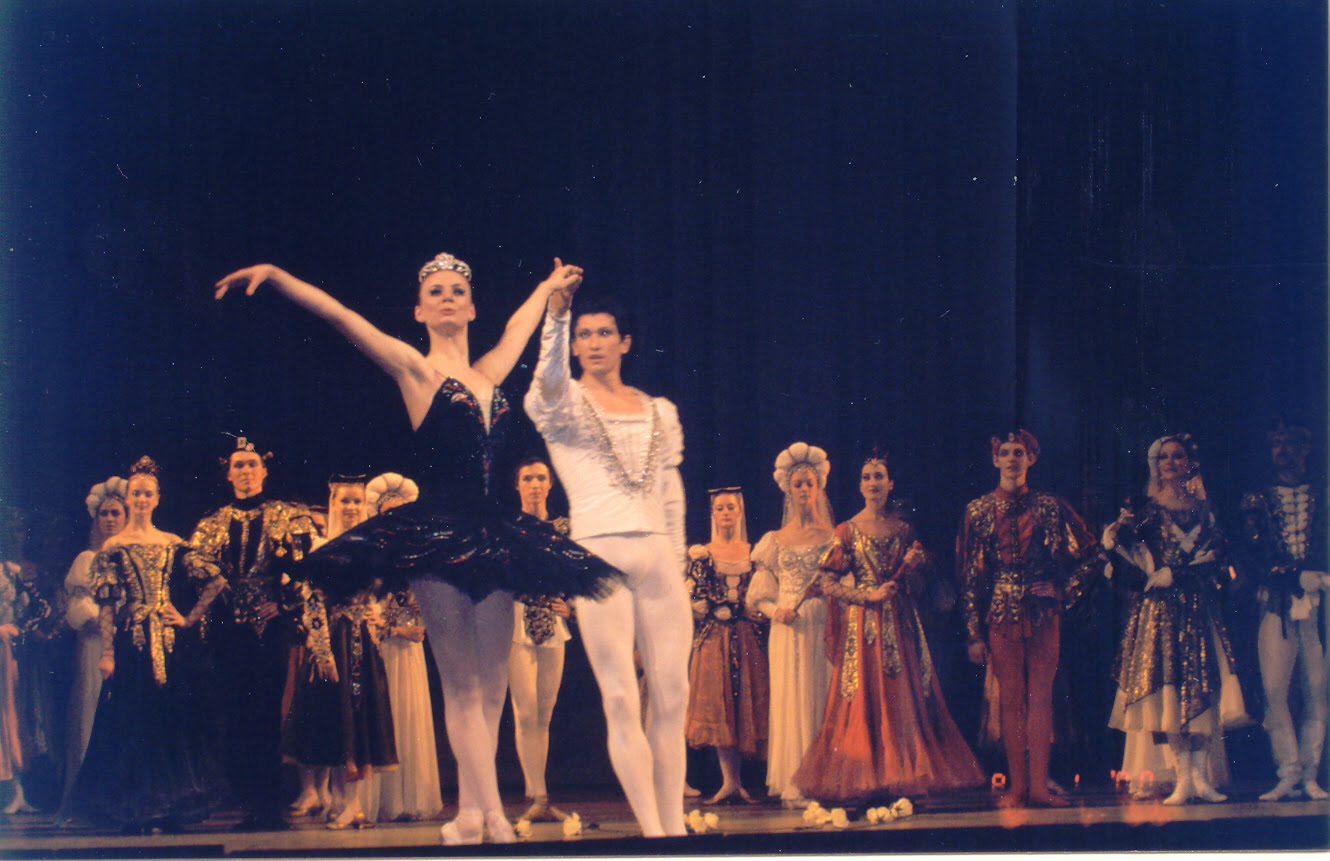 So the Prince dances with her and gives HER the bouquet of flowers. At which time sorcerer starts laughing like a mad man and running around the stage chest bumping the other characters. Evil black costume princess starts taunting the Prince and poking him in the forehead as she laughs at him. And the Prince? He starts crying. Me? I lose ALL respect for the crying bachelor.

The prince realizes this was a trick and runs off to get his real swan girl. And together they defeat the evil sorcerer. And even though the Prince couldn't tell the difference between her and the evil black costume princess, the swan girl takes him back. I surely hope she doesn't have any sisters, because if she does, she's in for a lifetime of heartache with this guy.
During intermission we talked about how fabulous the ballerina was that dance the part of the Swan Queen, Odetta. I mentioned that her arms were incredibly long. Prez mentioned how unbelievably unhealthy skinny she was. During the second half, Prez couldn't notice anything except for the woman's arms which might have brushed the ceiling. I kept thinking she was going to break something every time she landed since I couldn't stop looking at ALL her bones which were barely covered by her skin. It made me a little sad to realize that not much has changed in the world of ballet which has always had a reputation for enforcing unhealthy views of the female body. I wanted to feed this woman SO badly. I wanted to make her a big bowl of pasta and watched as she ate the entire thing. But I can't because I think it would be really weird to bring a bowl of pasta to the ballet. So instead, I offer you a fabulous pasta recipe that is our current favorite. As usual, it's loaded with a ton of veggies which help to fill you up so you don't need as much pasta. And spicy pasta always makes me happy. 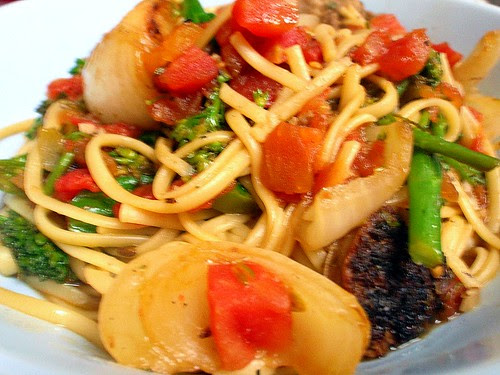 Feed Your Inner Ballerina Pasta
3 links Italian sausage, cooked and sliced.
4 oz uncooked linguine
2 Tbsp oil (we use avocado, but olive works if you don't have avocado oil)
2 cippollini onions, cleaned and sliced in half
1 bunch of broccolini
1 clove garlic, diced
1 can diced tomatoes
2 cups chicken stock
1) Prepare linguine. While linguine is cooking, heat oil over medium high heat. Saute onions for 2 minutes, or until tender.
2) Add broccolini and saute 2 minutes more.
3) Add in garlic, tomatoes, sausage, pasta, and chicken stock. Saute 5 minutes or until half the chicken stock is gone.
Posted by That Girl at 7:50 AM

Labels: At the ballet, dinner