Hoo boy do I have a lot to share with you! But it's going to be totally out of order because I'm already DAYS late on a Valentine's Day post, and frankly the later it gets the weirder it's going to be when I start going off on hearts and flowers. So let's start with some Valentine's Day celebrationing and then we'll go from there. Sound good?
Good.
Sharing the Love
If you know me, you know that I don't limit my Valentining to Thatboy. We sent out Valentines to our friends and family - and little gifties to Thatniece and Thatnephew. We got presents to give to Thatmom, Thatbrother, and UDubb since we'd be spending the actual holiday with them. And of course, appropriate treats were brought in to share with out coworkers. 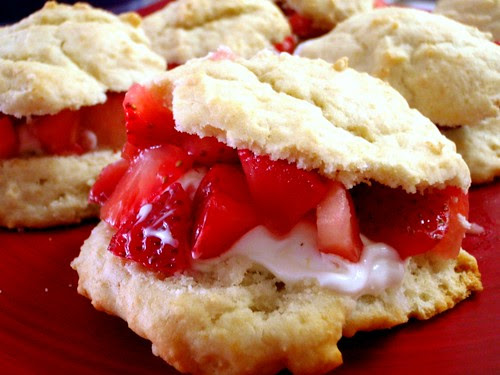 Take a little trip, Take a little trip, Take a little trip with me
Thatmom told us last month that she really wanted to send Thatboy and I away for Valentine's Day. As I've mentioned before, we've been spending a lot of time with Thatmom on the weekends over the past year, and she wanted us to have some quality time to ourselves. Thatboy told her he'd gladly accept her offer, as long as she came along with us. There was no way we were leaving her alone on Valentine's Day weekend - not only because of the holiday itself, but because last year, this was the last weekend she had with Thatdad. And we knew it was going to be a hard one for her. She fought with us about joining, assuring us she was going to treat it like just another day, but we were stubborn. Eventually she agreed. Soon Thatbrother and UDubb were roped into the weekend getaway and on Friday night we all found ourselves heading out to Palm Desert.
Thatfamily has multiple timeshares in Palm Desert, which means anytime we want to get away for a weekend, we head East. Our ownership meant we got a great deal on the brand new (opening weekend) Westin Desert Willow Villas. Brand new everything! We were the first to sleep on the heavenly beds, the first to use the oversize towels, the first to turn on the double showerheads, and the first to take advantage of the jacuzzi tubs.
But getting there on a Friday night was quite the ordeal. Our quick little trip took almost 3 times longer than we were expecting! Thatboy was trying to arrive as quickly as possible so he could watch the Olympics opening ceremony. Luckily we were able to get there in time for him to tune in. We stopped at the first place off the exit so he wouldn't miss a minute while we ate. 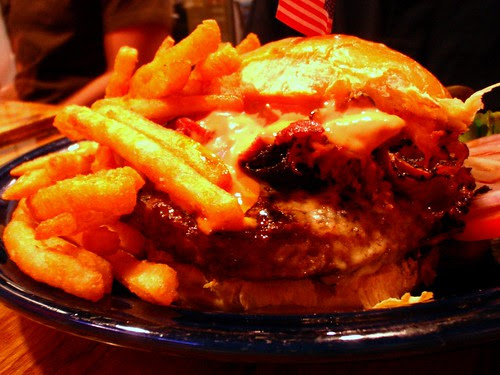 Thatboy's "Fire Chief" - a 1/2 lb burger topped with swiss, pastrami, and thousand island dressing. He said it was good, but he could feel his arteries clogging as he ate it. 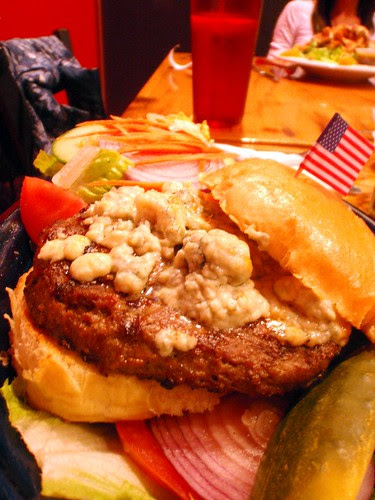 I made my own burger - topping it with blue cheese and bacon. And can I just sing the praises of beer battered fries for a moment? Heaven. Of course, neither of us was able to finish. I couldn't even get through half of my burger!
Race to Love? Love to Race?
I really wanted to do a race this month, now that I'm back running like it was my job. All the "good" or fun sounding races in San Diego however were on Valentine's Day weekend. Which wasn't going to work with our plans. So I decided to check and see what Palm Spring had to offer. Which is how I stumbled upon the Palm Spring's half marathon and 5k. I'm not quite up to a half marathon yet, but a 5k I can almost do in my sleep. As I can attest to my many morning runs when I'm not quite up yet. I emailed UDubb to see if she wanted to join me, and she was in. Then she made the mistake of telling Thatbrother about the special "Sweethearts division" of the half marathon. This allowed couples to run the half as a relay. One person does the first 5ish miles, the second does 3ish miles, and they run the last 4ish miles together. UDubb was beyond surprised when Thatbrother said he wanted to do it. She made him go on a 5 mile run with her, and then waited a couple days to make sure he was serious before signing up. 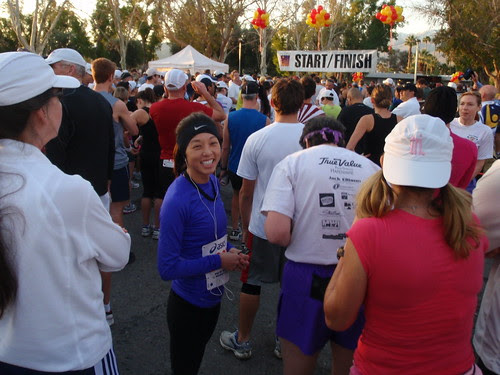 The plan was for UDubb to run the first section of the relay. Thatboy would meet up with her at the switchoff and run the second section. Then he'd loop around and pick her up so they could do the last part together. The halfers got a headstart on the 5kers so we were all there to cheer UDubb on. 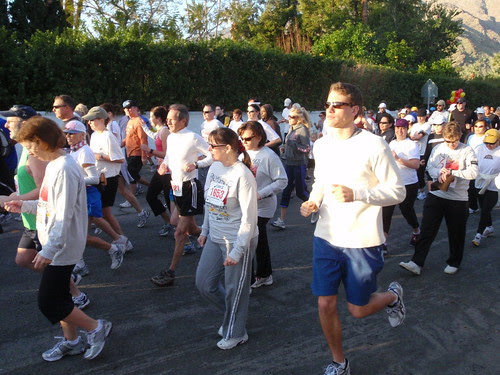 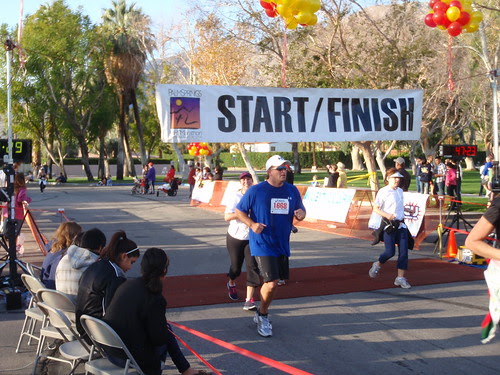 And even though I started so much later than the halfers, I finished before even one of them crossed the finish. Because I am so very fast. Or because they were running A LOT more than I was. Toe-may-to, Toe-mah-to. You can see the half marathoners clock to the right of me. Because it had only been 47 minutes since they started, we figured we had a wait ahead of us and we headed out to mile 11 to cheer on Thatbrother and UDubb. At mile 11 they were looking great. And strong. Thatmom had been worried about Thatbrother who is NOT a runner, but he looked pretty good. We'd find out why later. 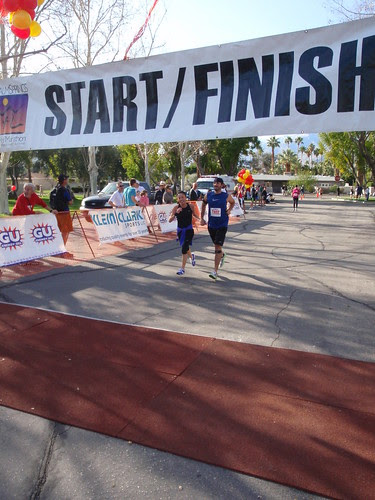 We headed back to the finish to watch them cross. How cute are they holding hands? It was Thatbrother's idea. UDubb wasn't interested. I can tell you one of the reasons was probably because Thatbrother had MISSED THE SWITCHOFF POINT. When she arrived and he was no where to be found, UDubb just kept going. The joined up again at the point where she was supposed to join him after his section. Thatbrother looked so much better than we expected because he'd only run a little over 4ish miles. UDubb had run THE WHOLE THING. And yet - they still came in second overall for all the "mixed" relay teams (a man and a woman). Somehow they didn't get put into the Sweetheart division, but they would have come in third if they had been.
Nothing says "I love you" like blood.
The first Valentine's Day Thatboy and I spent together we were both in college. We decided to skirt convention and go and see Hannibal. So when I saw that The Wolfman was opening Valentine's Day weekend, I thought it would be an appropriate homage to go see it. With Anthony Hopkins in it, we were expecting it to be phenomenal. Plus we'd both seen the original. Let me just say - Benicio Del Toro is no Lon Chaney. The story has been revamped a little, making the female lead the fiancee of Del Toro's brother. Which bothered me a little. Because really, if anything ever happened to Thatboy, I don't think I'd be lusting after TBIL. Seriously. Men are not interchangeable just because they're brothers. Think about how well that worked out for Catherine of Aragon. I also had a hard time buying into Benicio Del Toro as the romantic lead. Whether it was because of his wooden acting, stilted lines, or the nearly 20 year age difference between he and Emily Blunt. In that sense, the movie was a disappointment. The creepiness factor was fun though, and I liked the fact that they didn't over use technology. I love cheese in classic horror and the costumes weren't all CGI and technical.
Table for Two
There are a lot of thoughts on eating out on Valentine's Day. Frankly - Thatboy and I have never run into the stereotypical issues complained about, but I do my research in advance. I check for prix fixe menus that charge astronomical prices, I make reservations in January, we don't go places where you go to "see and be seen." But it is an excuse to eat out, and we take advantage. Thatboy wanted to start out with some drinks, so we began our evening bellying up to the bar at The Falls. This is where we discovered their signature "Smokin' Martinis." 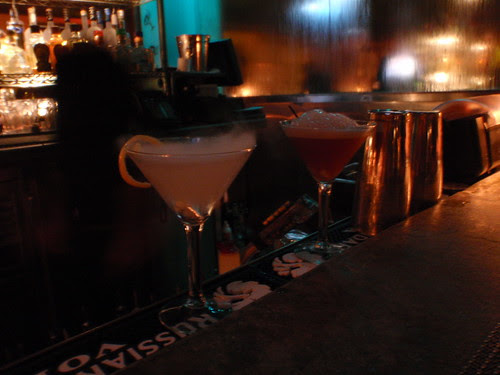 No really, those things were better than a witch's cauldron! When I asked the bartender what drink it was, he was very blase. "That's one of our martinis. They all do that." When I commented that he didn't seem nearly as excited as I was, he cracked a smile. 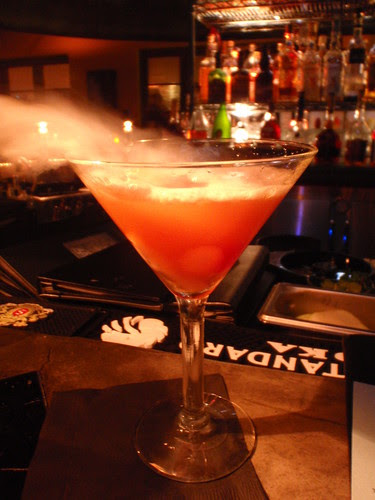 So of course we got a couple rounds, purely for science to discover if different alcohols had different smoking properties.
After our drinks, we stumbled our way over to our dinner reservations at Pomme Frite. Where of course, we started with some more alcohol. 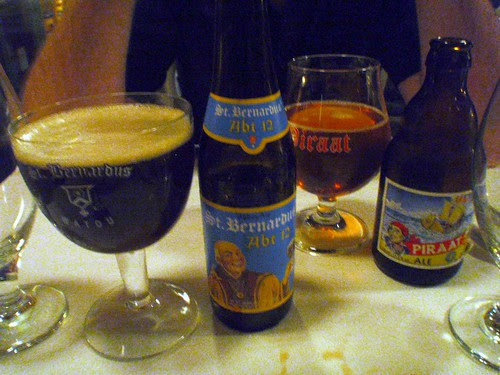 I found a new favorite beer while in the desert - St. Bernardus Abt 12. It's a brown ale, but really smooth and fruity. LOVE it. Thatboy had the Piraat Ale. I didn't sample it or ask how it was, because I was afraid that would open me up to having him ask for some of mine. 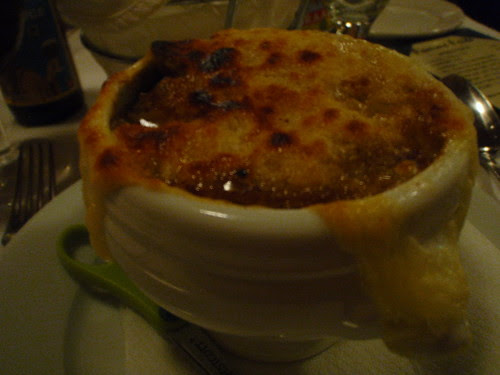 I began with a French Onion Soup, which was the highlight of my meal. So cheesy they served it with scissors to cut through the deliciousness. I didn't want to share this either, but I did. 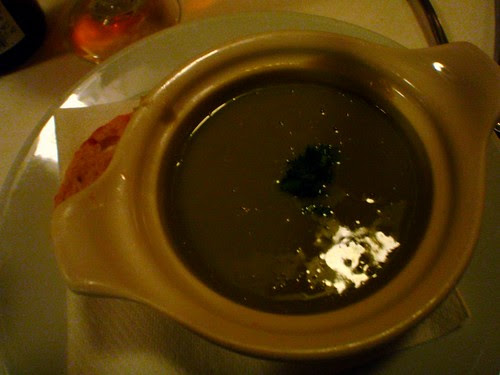 This bowl of darkness is Thatboy's Split Pea Soup. Not nearly as good as my soup. I was actually kind of surprised he ordered it, but who am I to argue with him? 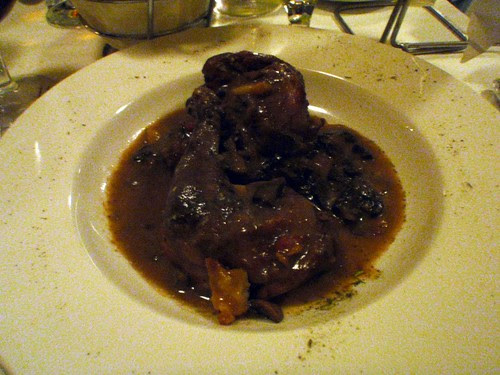 I had the coq au vin, which was nothing to write home about. Probably a bad choice on my part since this is a recipe I make at home - and I make a mean coq au vin, so it's hard for restaurants to live up to my standards. The chicken was perfectly cooked, but the au vin sauce wasn't as flavorful as I would have liked. 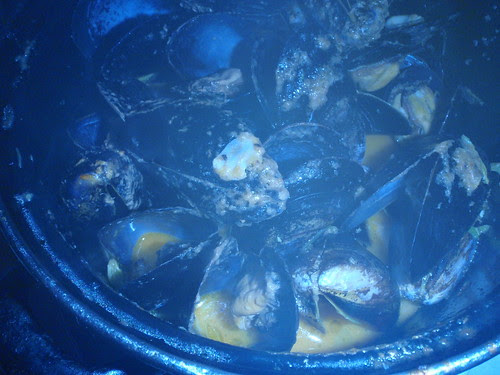 Thatboy went with the house specialty - mussels. The only food I'm allergic to. That I know of. He had his mussels in a saffron broth. He was in heaven. I kept hearing proclamations of "I can't believe how many there are!" and "This one was SO sweet!" They were apparently perfect. 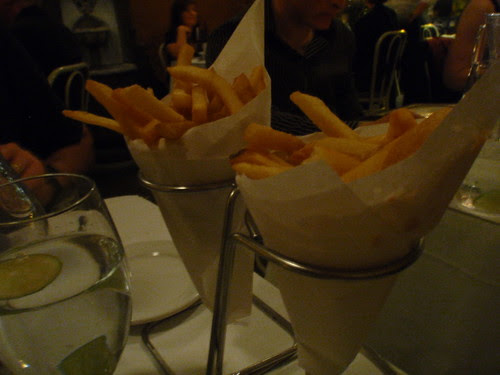 And of course, with a name like Pomme Frite you can better believe we ended up with pomme frites accompanying our meals. Thatboy thought they might have been the best french fries he's had. Served with a trio of dipping sauces - ketchup, something spicy, and one that look enough like mayo that I steered clear. But they were perfect for soaking up my chicken juices and his saffron broth.
Happy Belated Valentine's Day my loves! Hug those close to you, and don't forget to tell them how much you appreciate them.
Posted by That Girl at 2:56 PM