Do not adjust your monitors

It's not you, it's me. This post is going to be filled to the brim with awful awful awful pictures. See, Thatboy and I went to Mardi Gras last night. The tickets said "ABSOLUTELY NO CAMERAS OF ANY KIND." The signs said "NO PHOTOGRAPHIC EQUIPMENT." So I was a good girl and left my camera at home. I've been sent back to my car before for trying to bring a camera in somewhere and my car wasn't parked anywhere near last night's festivities. But apparently this "no camera" thing was one of those not real rules that everyone but me seemed to know about. Since I saw not just point and shoots, but full on DSLRs all night. And here I was with only my little phone camera. I'm not a phone tech kind of girl. I use my phone for making phone calls. It doesn't have any bells and whistles. So it should be no surprise that these pictures are.....um....artistic. Just turn your head to the side and squint as you read this. Or get really really drunk.

San Diego has what has been dubbed as "The biggest celebration west of the Mississipi" when it comes to Mardi Gras - bands, djs, performers, girls, and beads beads beads beads beads. We were supposed to go last year, but last year's Mardi Gras ended up being the day of Thatdad's funeral, and a giant party was the last thing on our minds. We decided to try again this year.

We started out the evening with a true Mardi Gras dinner. Sushi. (hmmmm something seems wrong there) But it had been forever since I've gone to one of my favorite sushi outposts, although I prefer Sushi Deli 2 to the downtown Sushi Deli 1. But beggars can't be choosers. We ordered a couple of rolls, with my pick being the all out winner. Good way to start the night.

After dinner we headed down to where all the action was. The plan was to walk around and see the sights, watch the 7:30pm parade, and be home and in bed at a reasonable hour. That SO didn't happen. Thatboy was having such a good time, he didn't want to leave! We stayed far too late and got home hours past our bedtime. What kept us so entertained you may ask?

Well it was Mardi Gras. Which meant there were scantily clad women everywhere

The 7:30 parade was so much fun, Thatboy decided he wanted to stay for the 10:00 parade too! Both parades started out with San Diego's very own roller derby team!

And of course, every Mardi Gras has got to have a King and Queen.

Uncle Sam showed up for the fun.

And this float was one of Thatboy's favorites as some of the float girls showed a little more than we were expecting.

Our Grand Marshalls were Craig Robinson and Clark Duke of Hot Tub Time Machine. Which looks like an awful movie. But we're fans of The Office so it was fun to see Darryl.

In addition to the parade, each street was blocked off with different "themes." The Candy Factory had a female dj spinning with loads of bubbles and go go dancers.

E Street was home of the Dance-Off. Since it's not a secret Thatboy and I are fans of "America's Best Dance Crew" it should be no surprise that we really enjoyed watching these talented dancers battle. 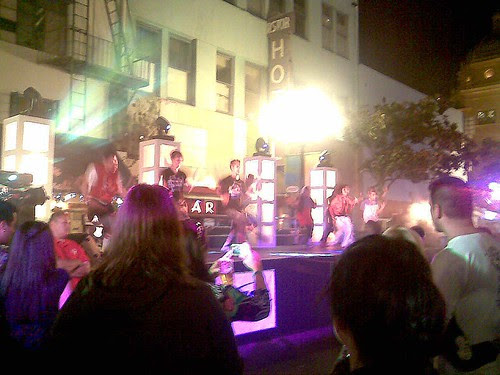 We spent forever in "Market Street Cirque" watching Zirk Ubu. See that swirly thing in the middle? That's a hula hoop. That's been lit on fire. That is spinning around the body of the performer.

This guy climbed on top of 5 chairs before juggling flaming batons and putting them out in his mouth or pants.

Not to be outdone, the "mystic" did his own flame eating, blowing, and sword swallowing. Bet he's a ton of fun at parties.

We had a fabulous time at Mardi Gras last night, but seriously, this little girl needs more sleep and less partying!
Posted by That Girl at 8:16 PM