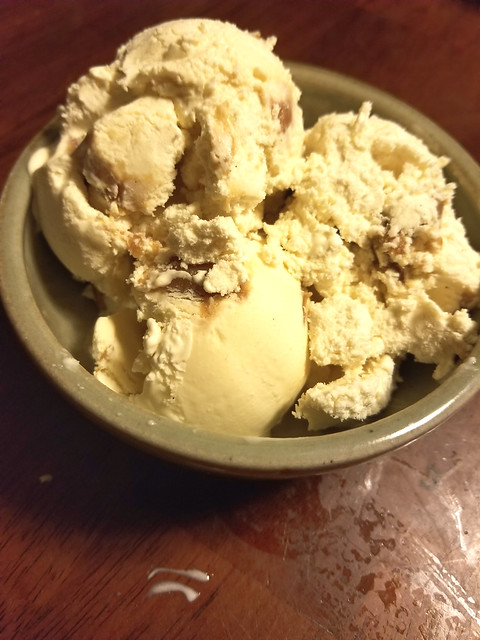 When we first planned out our "Universal at Home" day, Thatkid requested that we do an entire separate day for the Wizarding World of Harry Potter.  In fact, he requested we basically just do a Harry Potter themed day.  He's just finished the series, and would have been in San Francisco seeing Cursed Child if not for the pandemic.  These seemed like a very easy compromise.  Especially since we have so much leftover from his birthday party last year.

So Saturday morning we headed to Hogwarts.  First we made a quick stop at Diagon Alley to pick up some wands.  The fact that they already have 11 wands between the two of them notwithstanding.  Thatkid really wanted to make another wand, and I still have a whole mess of the extra long chopsticks.

So they got to design their own wands, which I created with some mom-magic (and hot glue) and then they got to paint them. 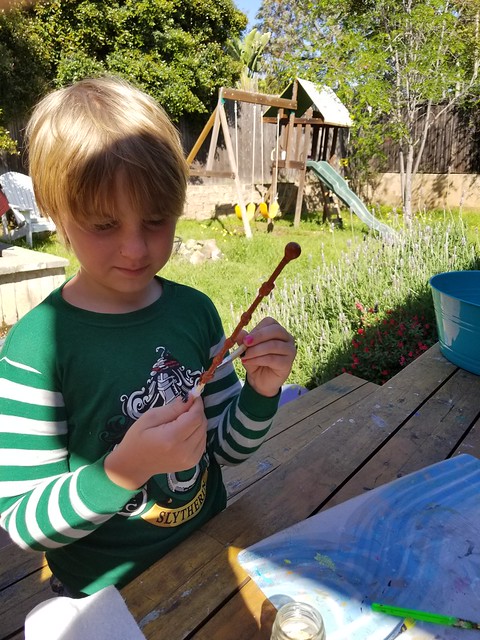 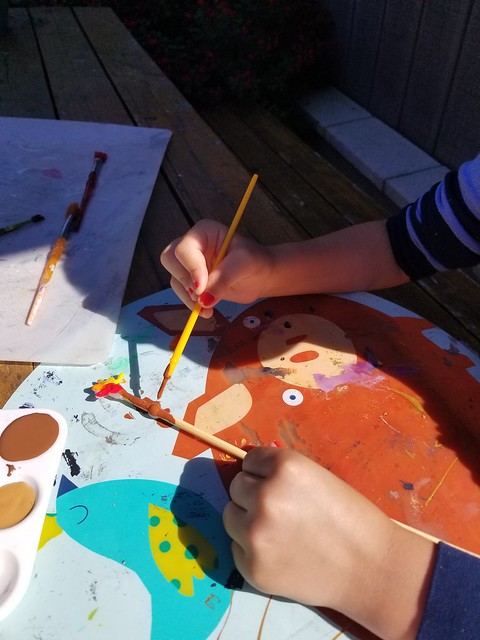 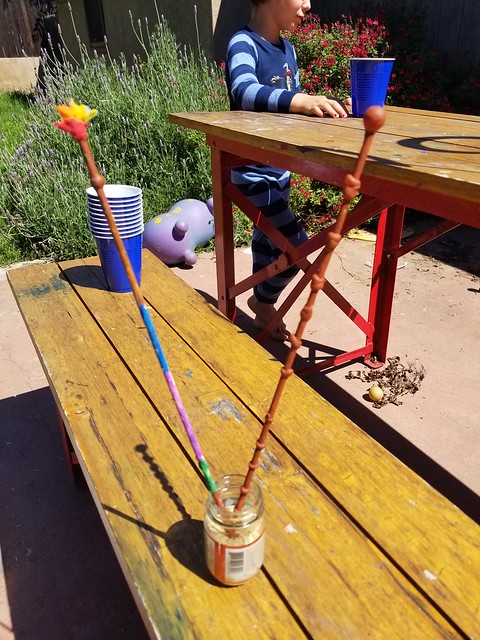 We did make use of the Wizarding World at Universal Studios to help explore.  Like taking the Hogwarts express from Diagon Alley to Hogsmede, and visiting Gringotts, Hagrid, and taking a Forbidden Journey with Harry Potter. 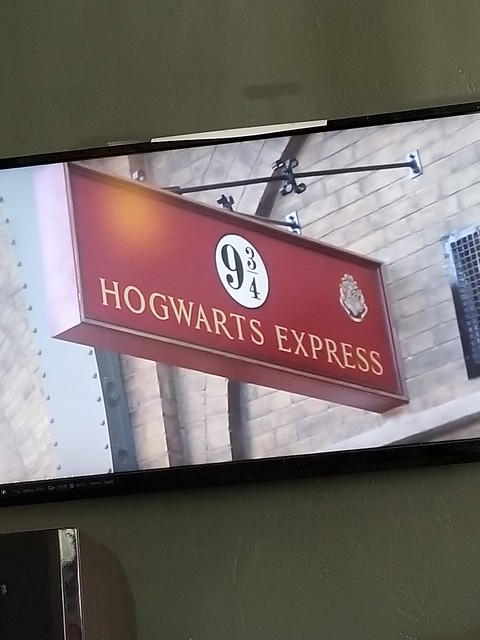 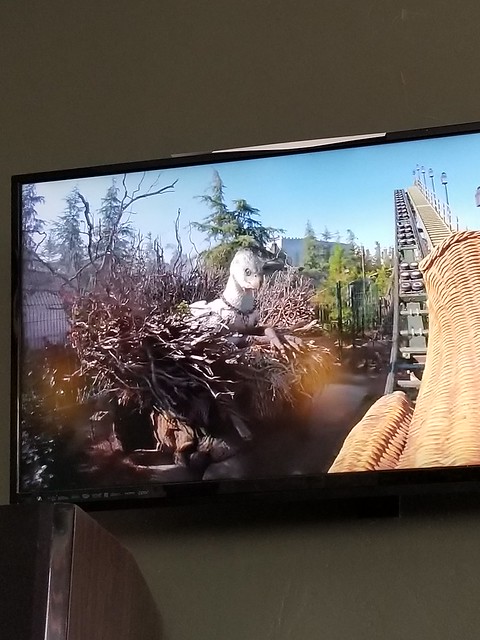 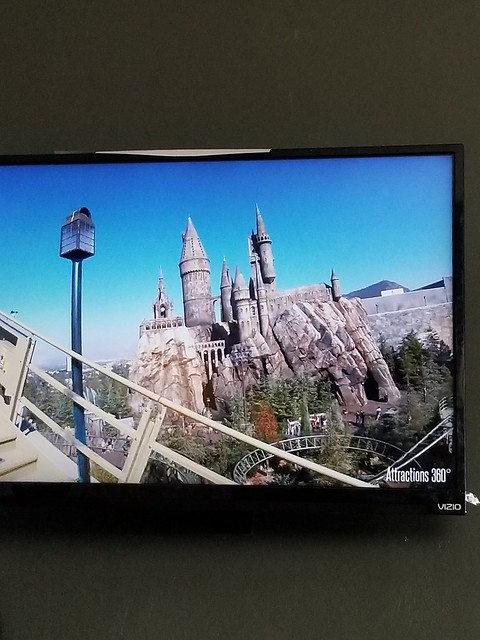 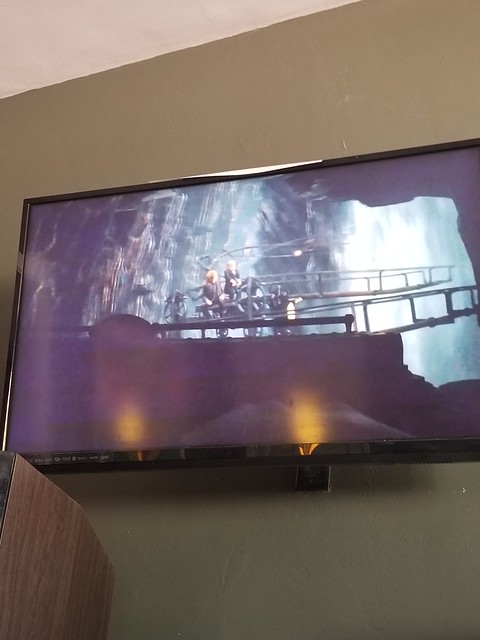 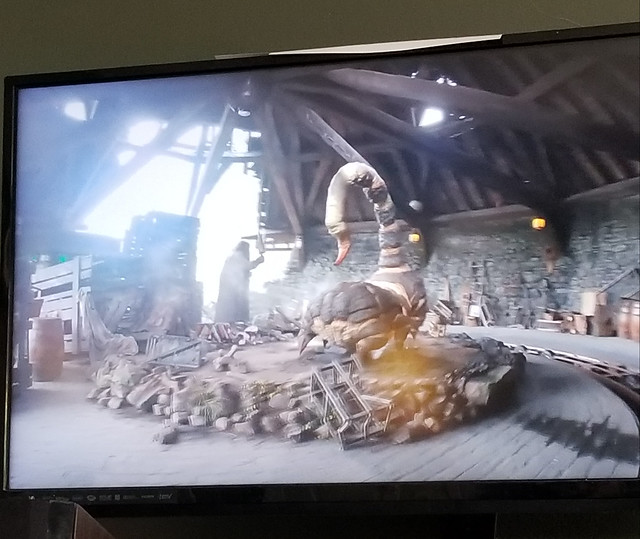 I also set up some classes for them.  Like potions.  We did a lot of "magical" chemistry and the "Exploding Elixer" was a HUGE success. 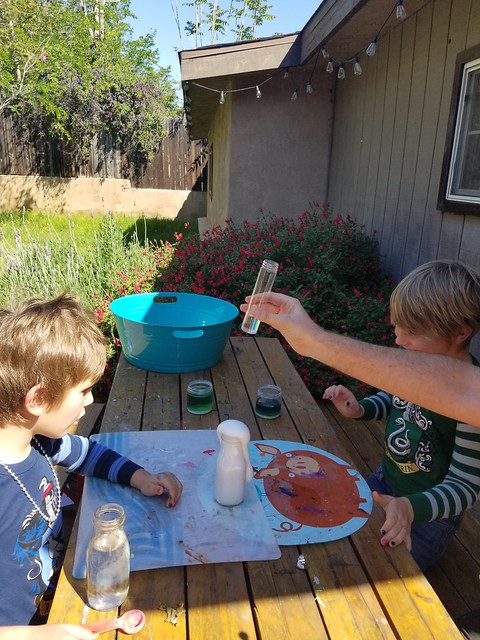 I ordered some Harry Potter training wands for Charms class.  The wands come with a spell book and electronically test you on spells - letting you know with lights and sounds if you get the spell right.  Both boys spent some time learning their spells. 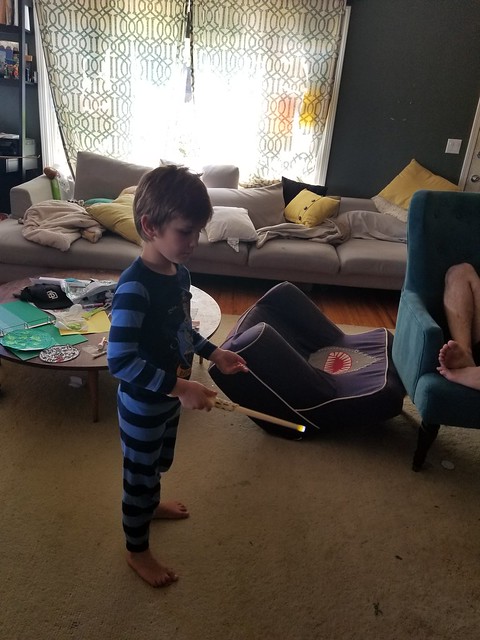 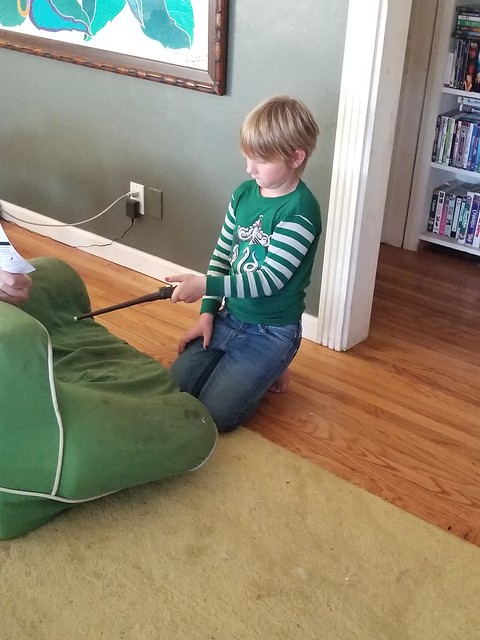 There is also a setting for playing "wizard tag" which works a little like laser tag, with the wands interacting with each other.  We're hoping that this cuts down on the boys actually hitting each other with wands on their frequent wizard duels. 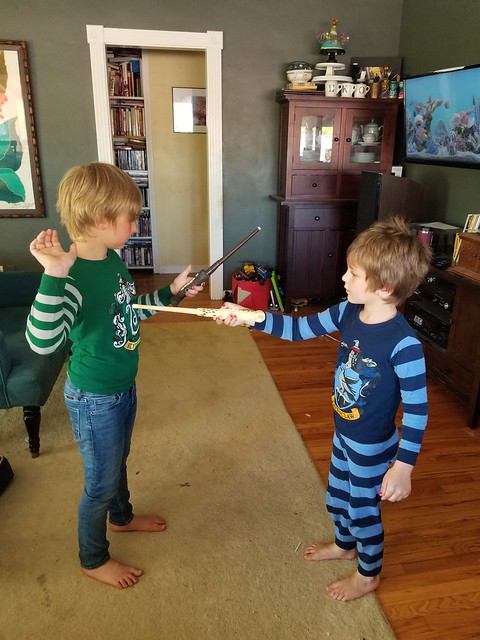 I set up a much smaller Quidditch field than I did for the party.  Which was much easier to deal with, and a lot of fun. 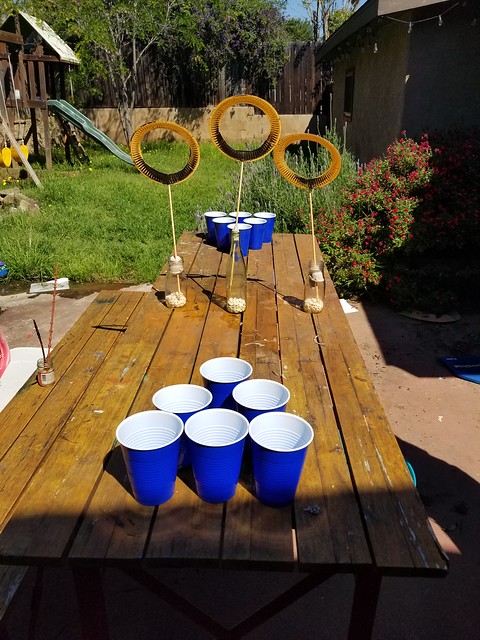 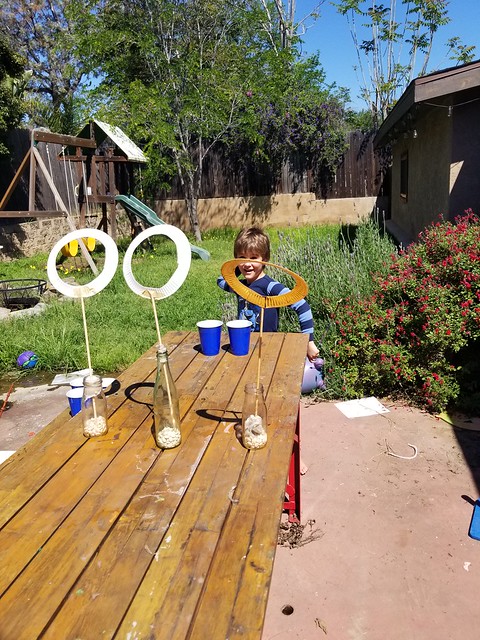 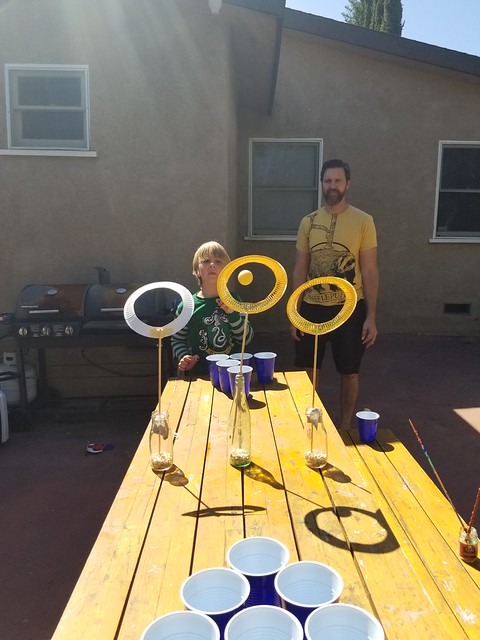 For lunch I made Mrs. Weasley's famous corned beef sandwiches, with a little something off the trolley to go with it - chocolate frogs, jelly slugs, Bertie Bott's every flavor beans, and butterbeer. 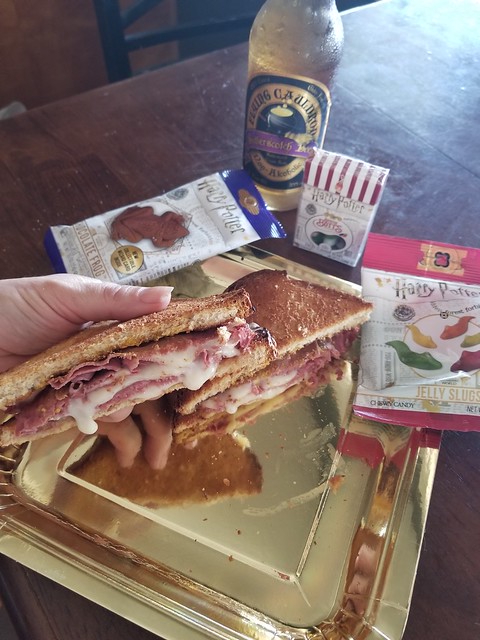 After lunch and nap, we took in some shows from the Wizarding World of Harry Potter. 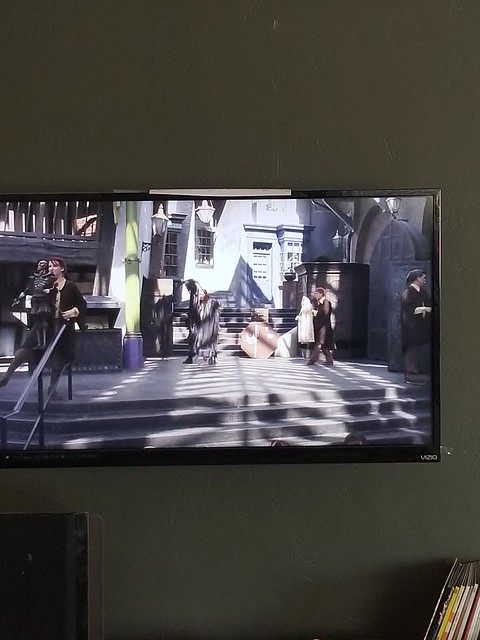 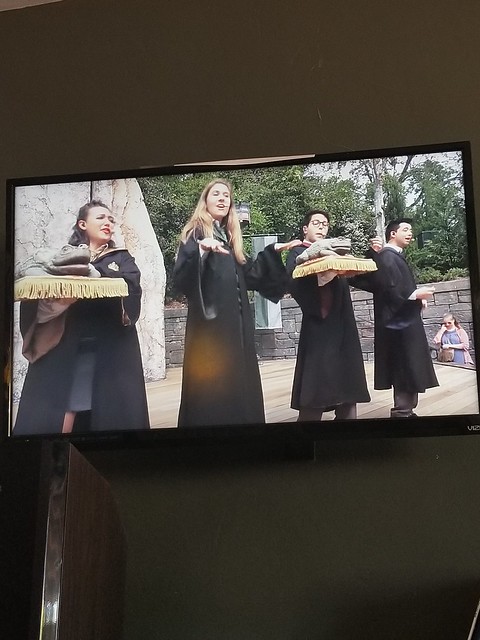 And had a dance party to the music of Celestina Warbeck and the Banshees. 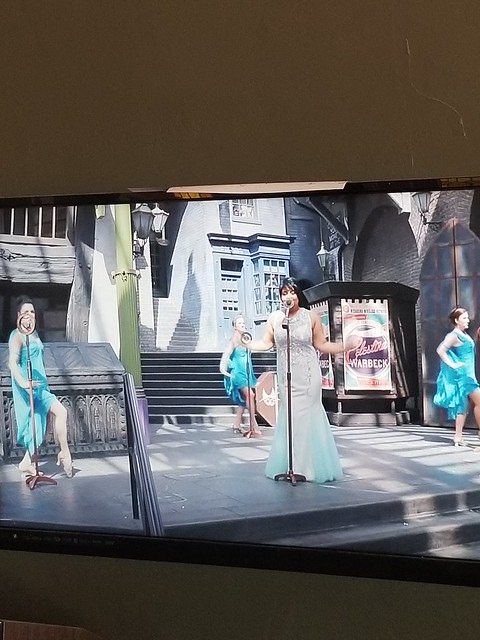 I made some simple pub fare a la the 3 Broomsticks for dinner - some vegetable barley soup and some pumpkin juice. 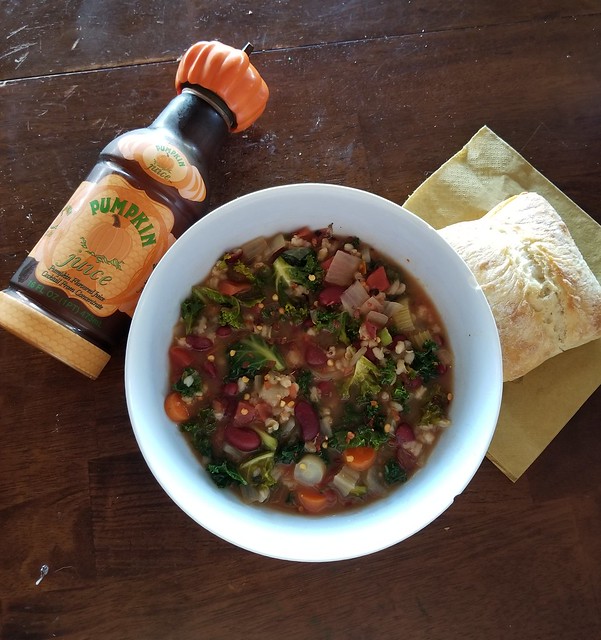 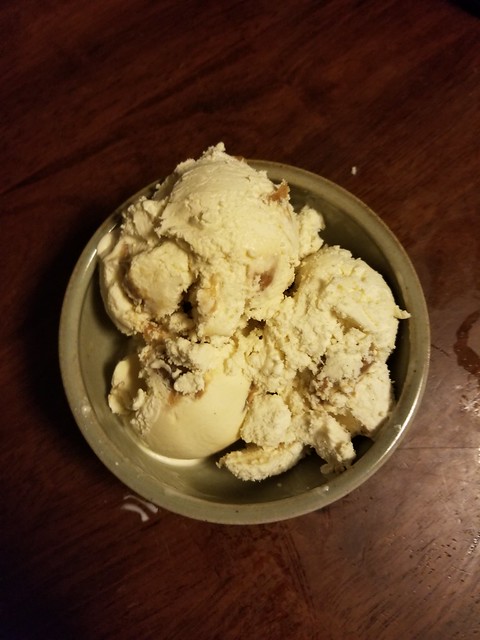 We ended the evening with watching the Nighttime Lights at Hogwarts show. 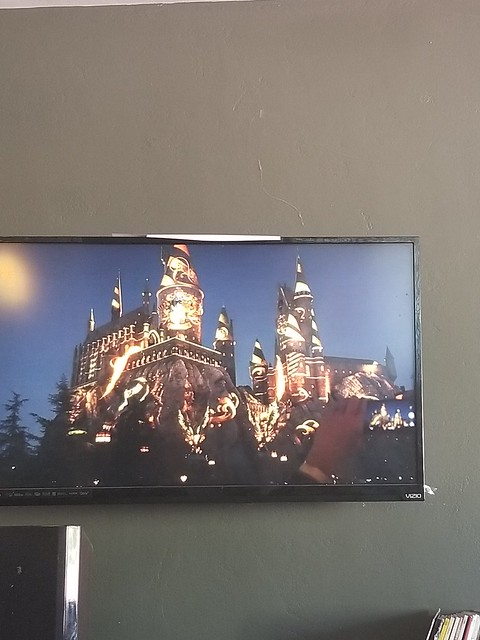 The butterbeer ice cream isn't exactly canon, but it's something we were going to try for the first time on our trip to Universal Studios, so I thought it would be a good time to try a copy-cat recipe.  But there really isn't one.  Instead there are a lot of no churn recipes.  But I have an ice cream maker, so I wanted a churn one.  I found this recipe from Feast of Starlight which used the ice cream maker, a cream soda reduction in the base, and layered the butterscotch to make a swirl.  Which sounded like a great jumping off point.  But I'm lucky enough to have butterbeer soda easily available at several local stores/markets so I wanted to use that instead.  If you don't, or prefer a milder flavor, head over to her blog.  This recipe also calls for homemade butterscotch, which is my favorite ice cream topping, so I was happy to make it.  However, if you want to cut corners or save time, commercially made/purchased butterscotch syrup would work just fine.  I played with the recipe a little, adding more butterbeer/butterscotch flavor than she had initially done to give it a REALLY rich, butterscotch taste.  It was a fantastic way to end our day. 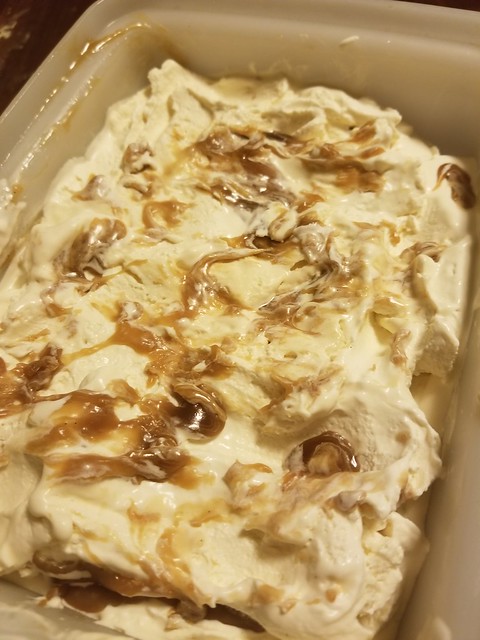