May the Force Be With You: Blue Milk

As you may or may not know, Monday was "Star Wars Day."  Unfortunately, Monday was also a work day for Thatboy and I, so I knew we wouldn't be able to partake in fun Star Wars activities.  So last weekend's adventure was a Star Wars Day, where we could take part in all the frivolities the rest of the world could get into on Monday.

We started the day with a fun looking craft I had seen on Star Wars Kids - Nesting Dolls.  The site features a tutorial on how to make Porg nesting dolls, but I opened it up to the kids that they could do any Stars Wars character they wanted.  (In my head I thought it would be really cute to have the big doll be Chewie with all the porgs inside.) 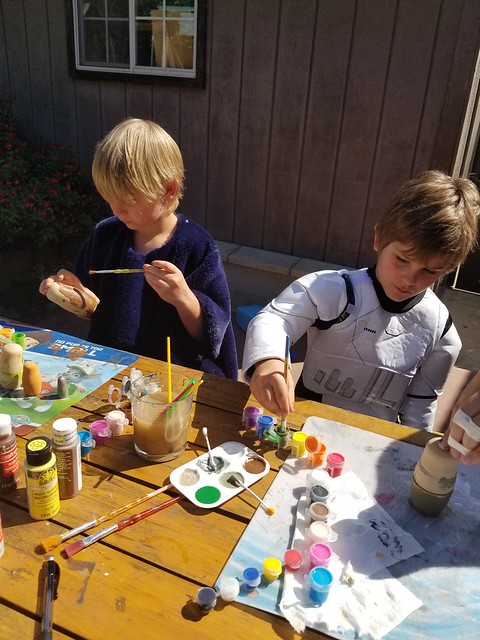 Thatkid decided to do Chewbacca, Jabba the Hutt, an Ewok and a Porg. 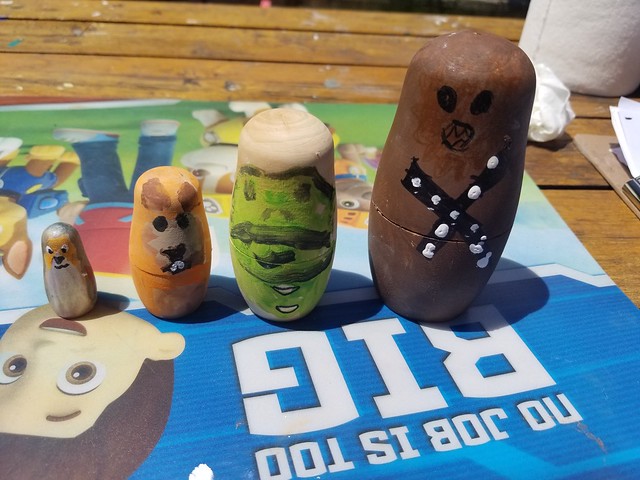 Thatbaby (who had a little more adult help) went with Boba Fett, a Storm Trooper, Darth Vader, and a porg.  He's much more affiliated with the Dark Side. 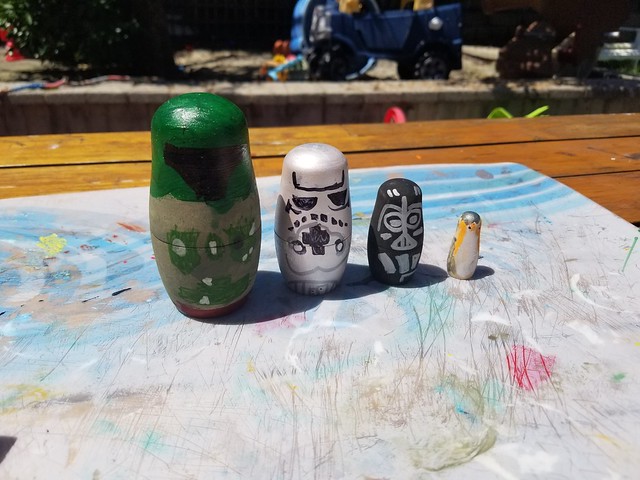 Santa left the boys light saber chop sticks in their stocking this year, so I wanted to serve a lunch that would capitalize on that.  I decided to go with Yobshrimp Noodles, a cold noodle salad dish served at Disney's Galaxy's Edge.  I did a hot version of that - really terriyaki shrimp and noodles, along with a little cucumber yoda. 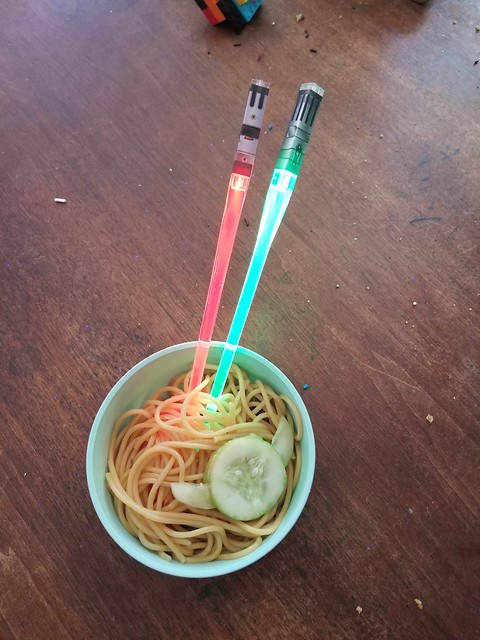 After Thatkid woke up from nap, we headed back outside for some Star Wars playdoh.  I found this Millennium Falcon set which came with  "Can Heads" or containers featuring our favorite Star Wars characters which we used to act out scenes.  We made all sorts of fun Star Wars weaponry for them, as well as X-Wings and Tie Fighters. 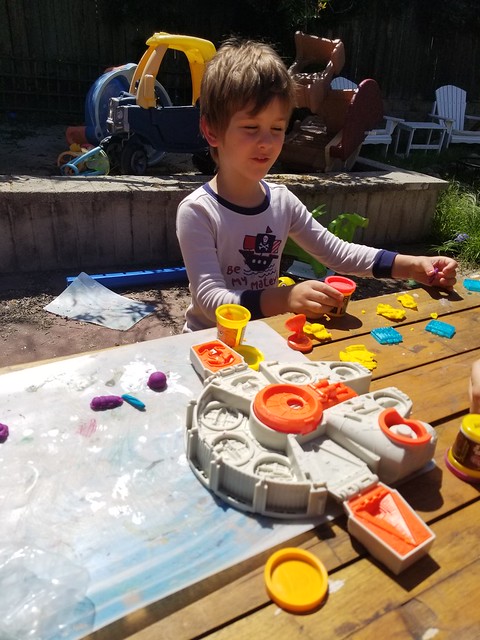 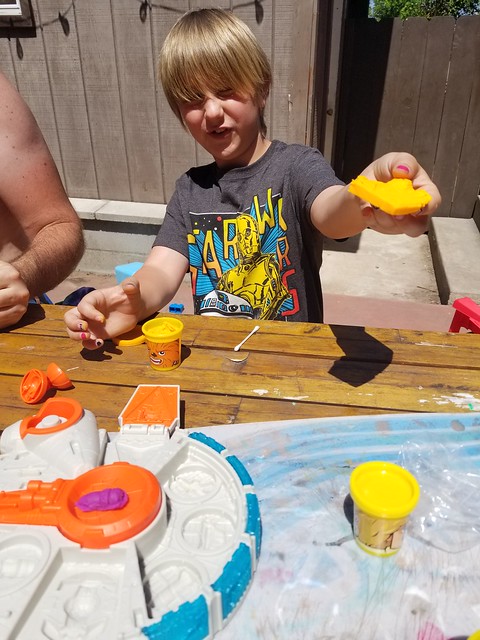 But Thatkid really loved the satellite launcher which he used to send almost every creation into our yard. 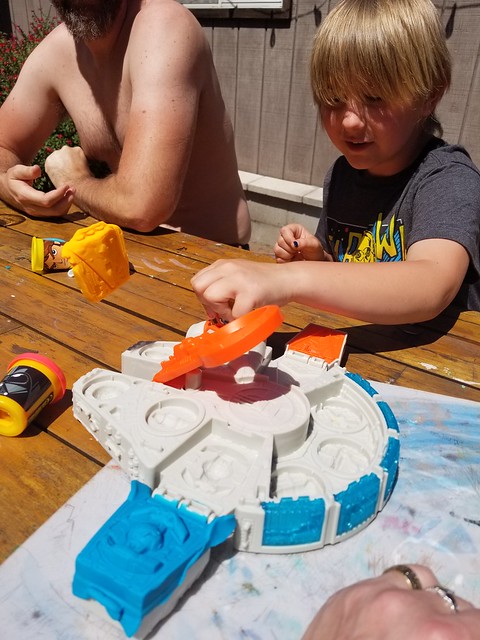 When they were done with that, everyone grabbed a light saber for some Jedi training. 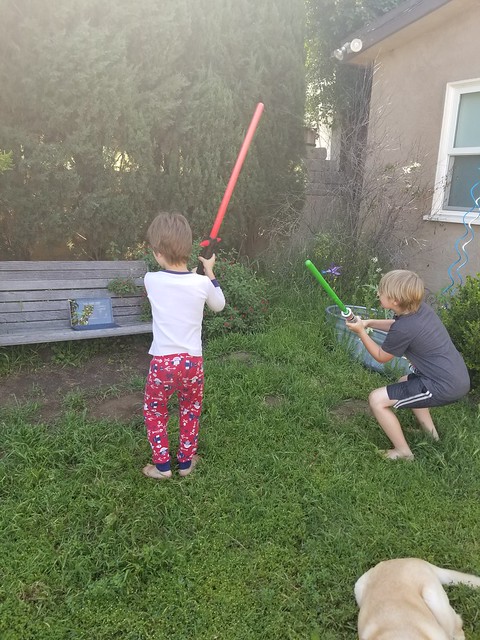 If you've been to Disneyland or Disney World, you may be familiar with their Jedi Training academy.  Before Galaxy's Edge, they used to run this for kids.  They would take a group of them through "training" and then Darth Vader (and later Kylo Ren) would show up and each child would have to face the Dark Side using the routine.

We used a video of that to learn the routine, and then our very own Dark Side showed up that we each had to battle. 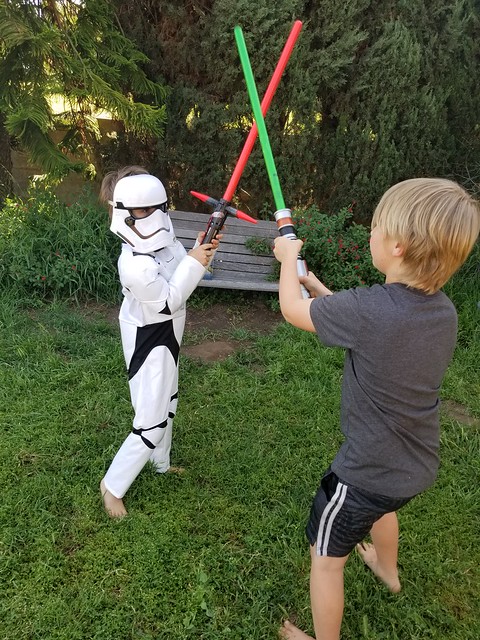 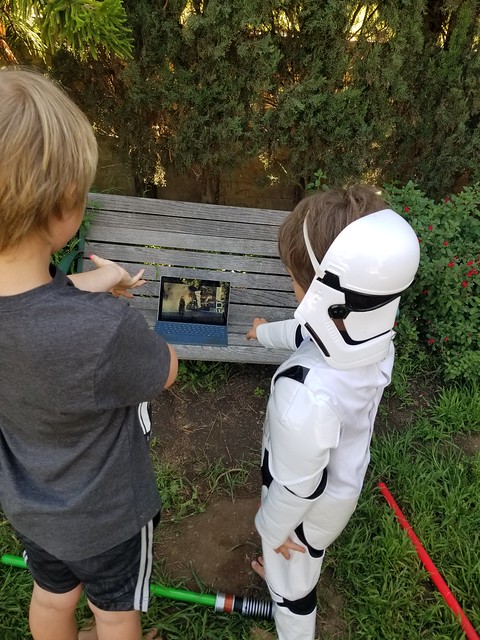 We continued to have numerous light saber wars for a long time, until finally the kids had enough.  Then we went inside to the Droid Factory to build our own droids.

I had seen this book last year and thought it looked neat, but had no real need for it.  When I started planning Star Wars Day I went on a hunt for it, because of course between the fact that months had gone by and there was a pandemic, meant it was not as easy to find.

I finally hunted down a copy which meant droid building for us!  (And by us I mean mostly Thatboy and I).  The book comes with punch-outs to create BB-8, R2-D2, and C3PO.  Each boy picked out which droid they wanted and we got to work bending and inserting tabs for what felt like forever. 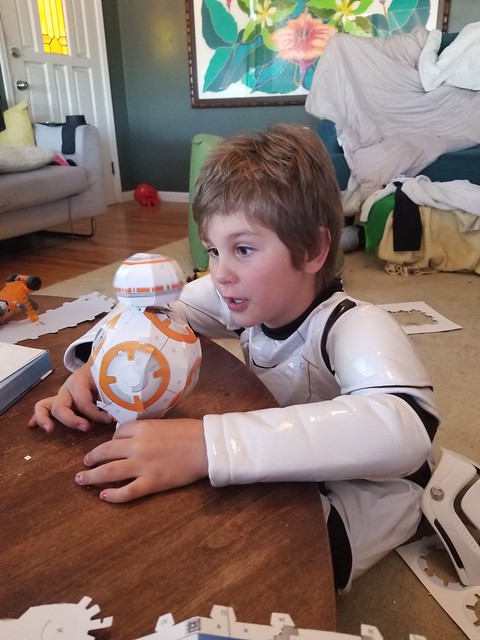 The neat part is that they also came with little engines/wheels so the finished droids can be wound up and go rolling around the floor or the table. 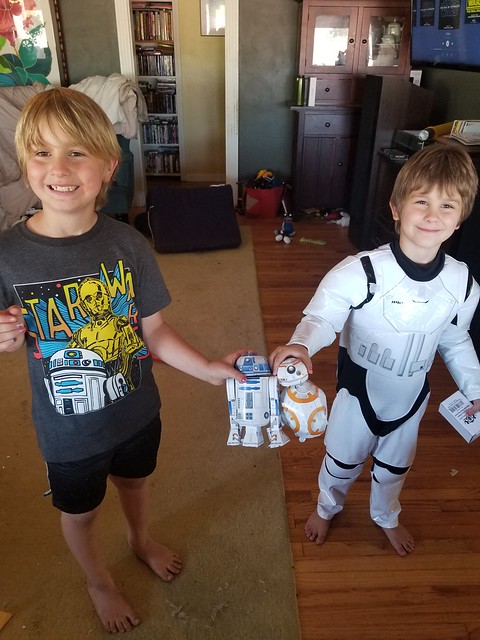 By the time we finished those, it was time for dinner.  The boys had already seen episodes 4-8, so we decided to rewind all the way back to Episode 1 for them.  And for dinner?  Their own little light saber battles - the light side versus the dark side. 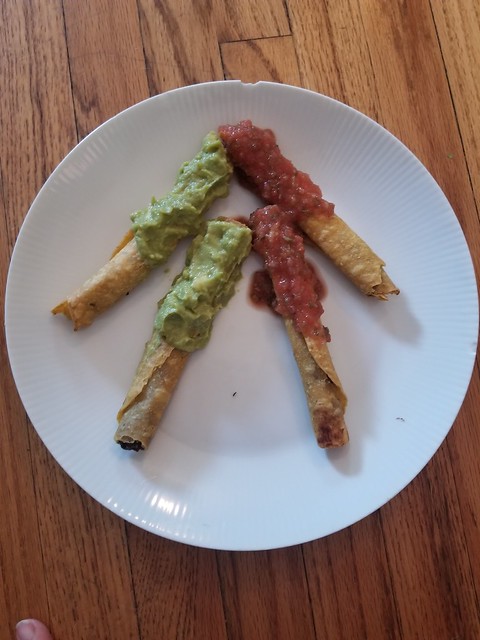 And of course, what Star Wars day would be complete without blue milk? 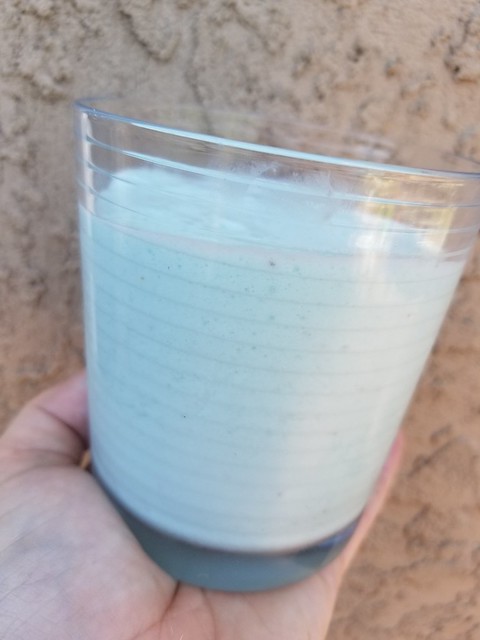 There are approximately 1 million recipes for blue milk out there, but all of them seem to predate the version currently found at Galaxy's Edge.  Or are filled with a bunch of hard to find ingredients in the best of times, let alone a pandemic.  I knew I wanted something that was blue, fruity, and slushy like the ones we'd had at Disneyland. My first thought was some sort of blue juice powder - like Kool Aid, that I could add to milk.   Problem was, most of the blue powders were blue raspberry flavored, which wasn't exactly the fruit I was looking for.  And then I found Hawaiian Punch's Polar Blast, which was supposed to have flavors of passion fruit, pineapple, orange, papaya, and guava.  Which was perfect!  I added some frozen pineapple to help give it that cold slushy texture without messing with the color or flavor, and voila - easy to make blue milk in your very own home! 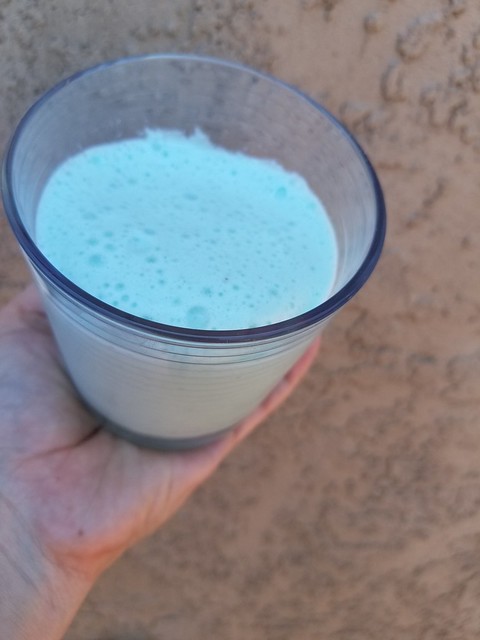