Let it go into the unknown: Frozen Hot Chocolate 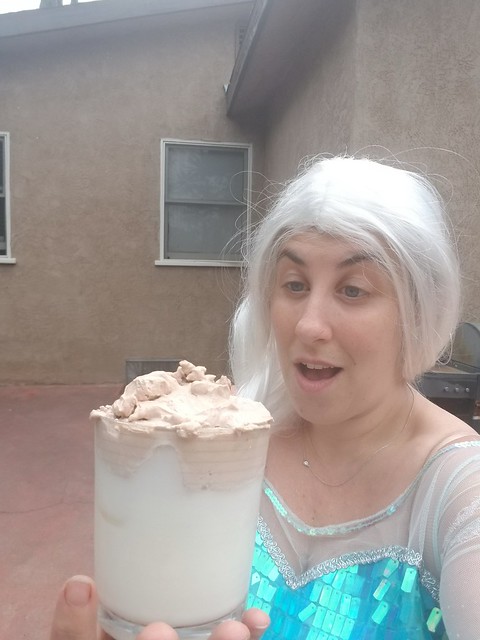 Back in March Thatbaby and I had a mommy/kid date set up with his friend Princess Anna.  We were all supposed to go see the musical Frozen.  Princess Anna and Thatbaby had been talking about it for months.  Practically every time I saw her, Princess Anna asked me when we were going.

Of course, like everything else, the musical was cancelled.  Or postponed?  I still have hope it will happen in the future.  Until then. we decided to have our own Frozen day at home last weekend.  And yes, there was lots of singing.

I also set up lots of Frozen activities - especially novel for kids in Southern California, but also fun for kids everywhere who want to play in the snow, but not get cold and wet.

We started out with a "Snow"ball fight. 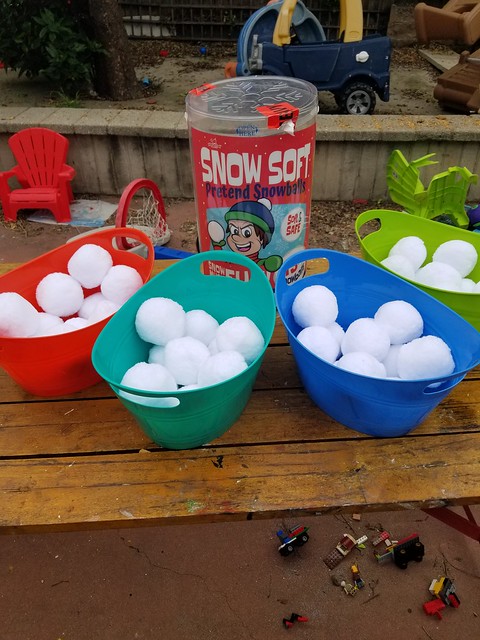 I got a bunch of soft fake snow balls and divided them up to start so we all began with the same amount.  But after that it was a free-for-all. 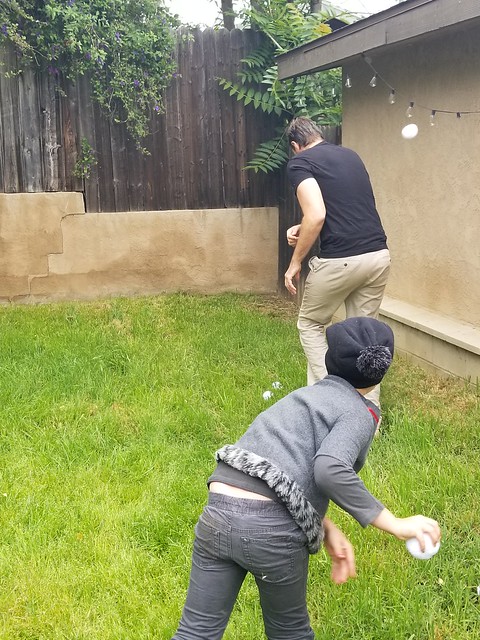 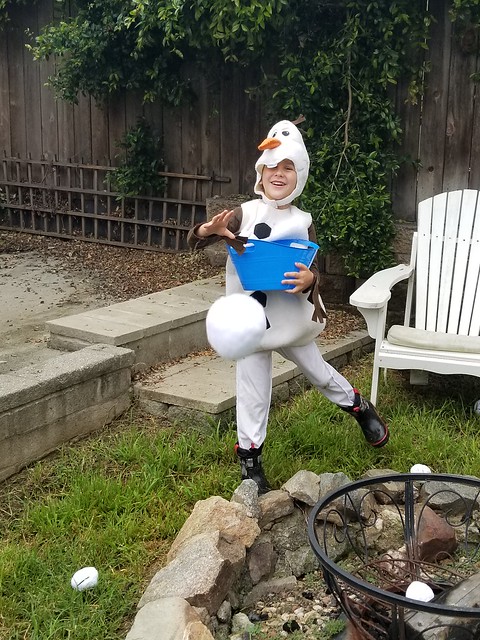 The kids had such a blast with this.  The balls got filthy, but I tossed them in the wash, and after nap they were clean and dry.  I scattered them around our living room and we were having impromptu snowball fights until it was bedtime.

After that it was time for a snack break with some "Frozen" hot cocoa." 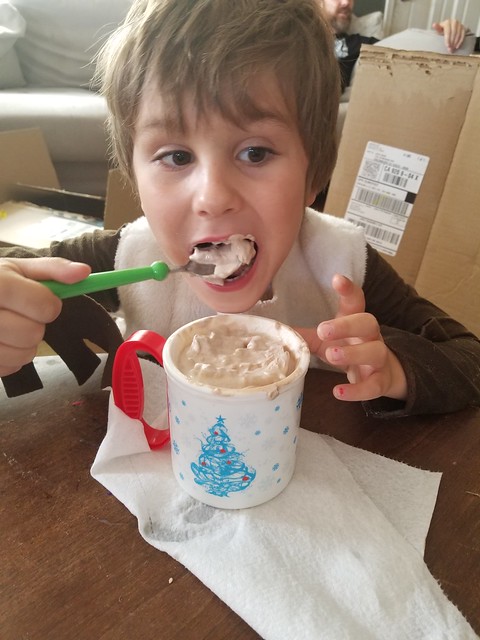 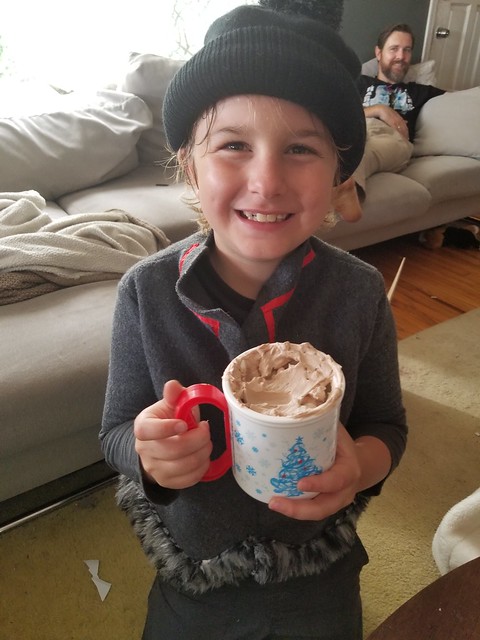 And then we put on the first Frozen movie for them to watch.  During which we served "We finish each other's" sandwiches. 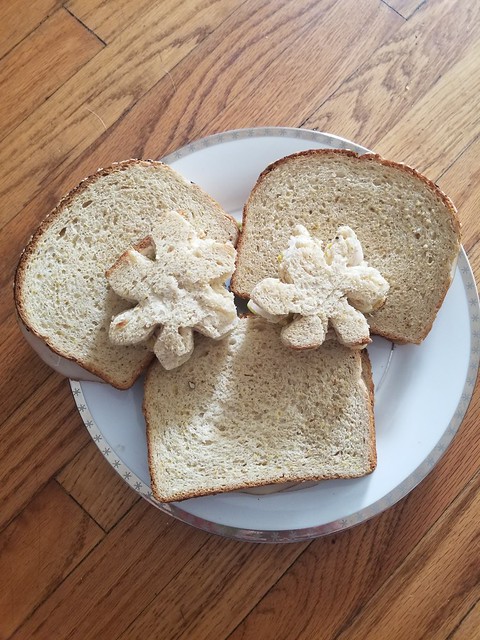 After nap, we headed back outside for a little snowplay.  I picked up some "instant snow" (the kind you just have to add water) and put it in our pool.  Which kept it contained, but also gave us a fun place to play.  The "snow" was even cool to the touch - but not that bitter cold that makes real snow not so fun after 10 minutes.  The kids played here for hours. 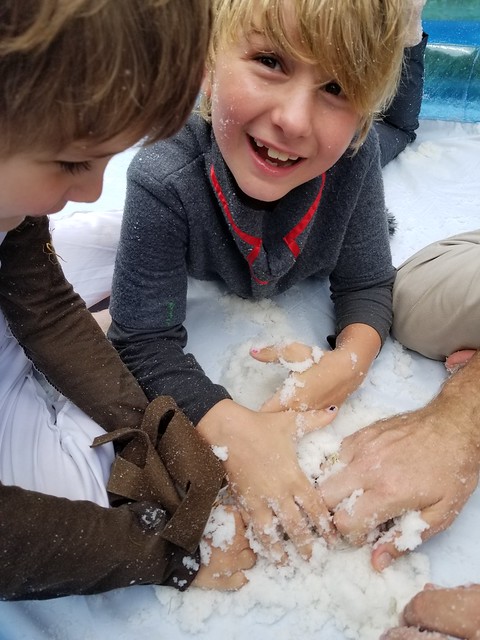 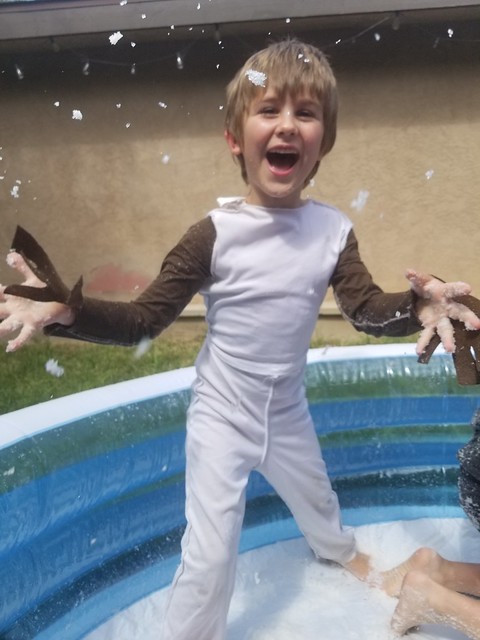 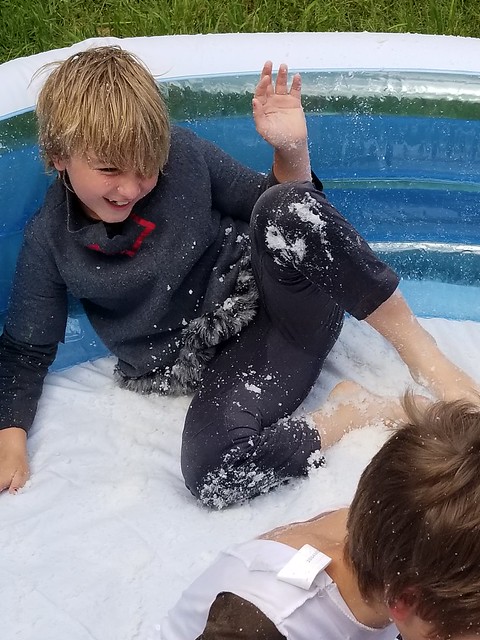 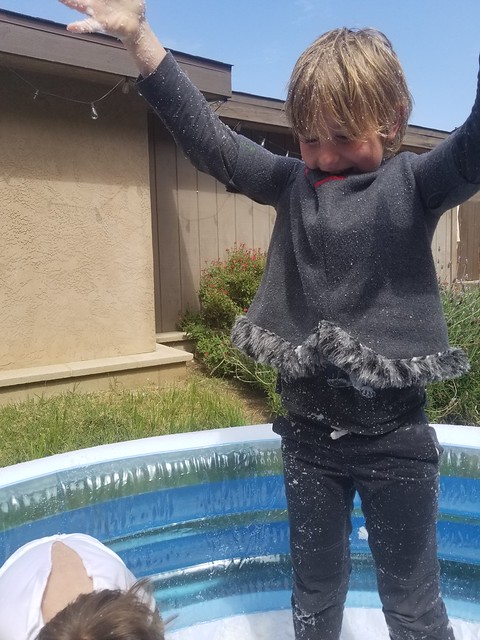 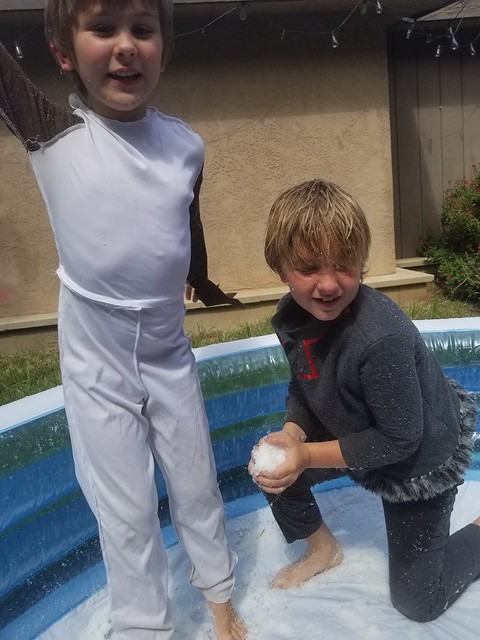 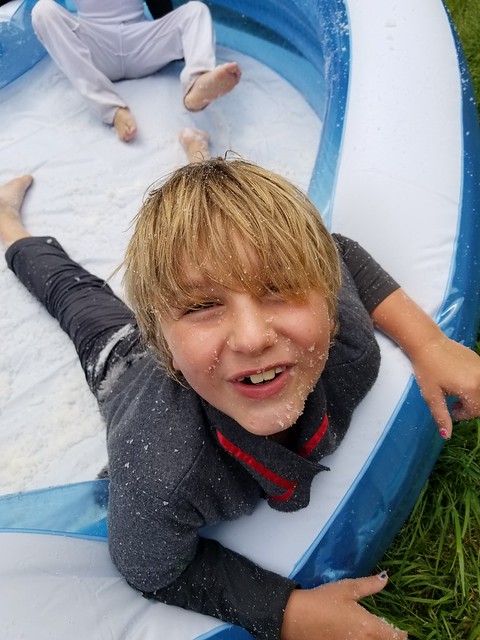 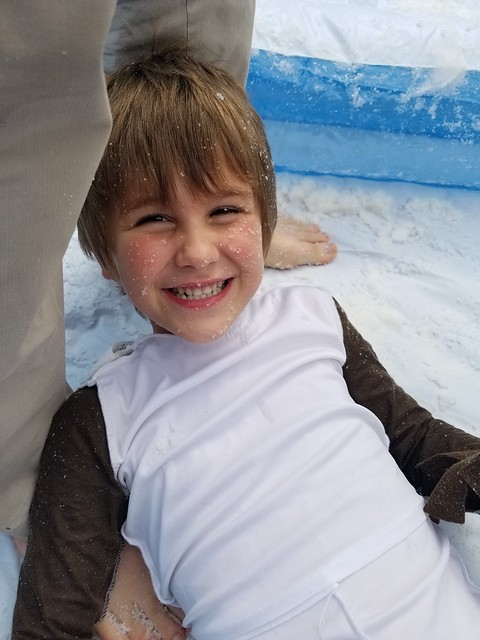 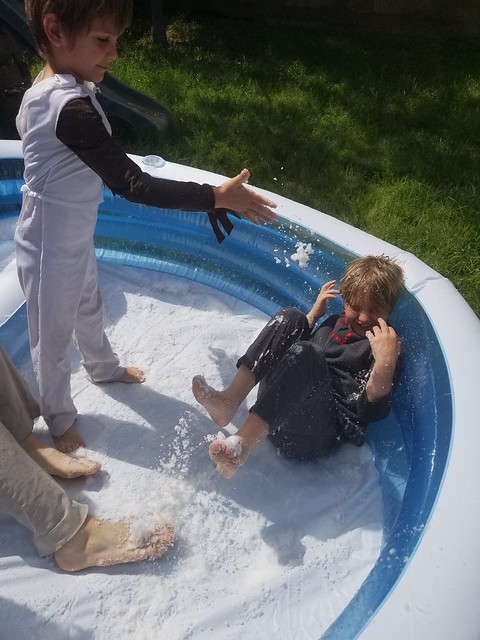 Our last big activity was building snowmen.  I found a "build an Olaf" sticker kit where they could create their own snowman. 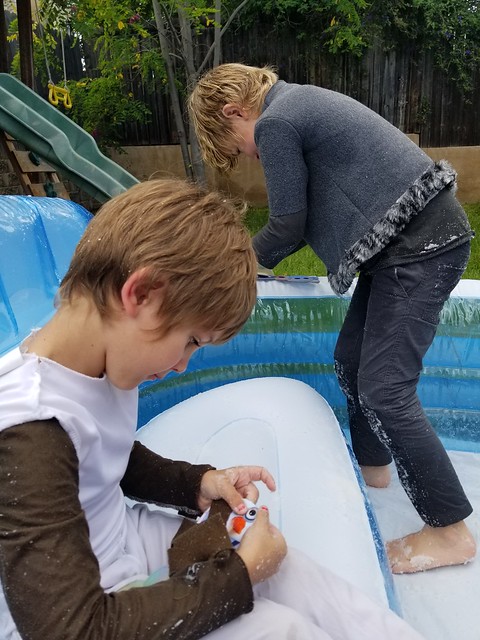 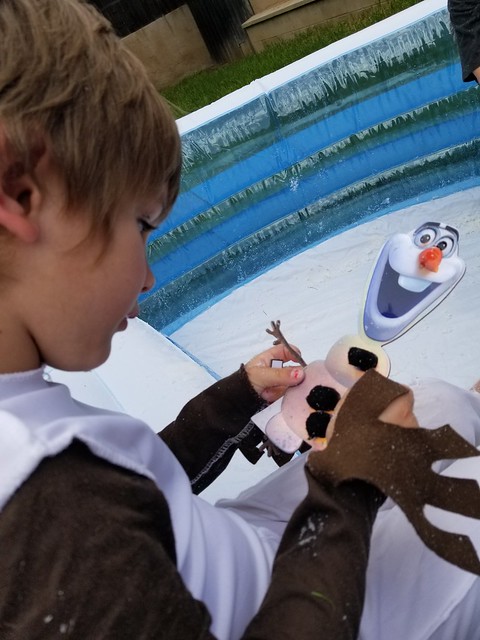 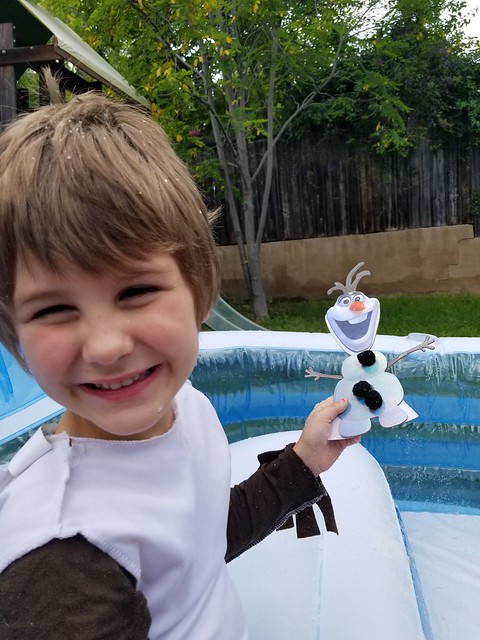 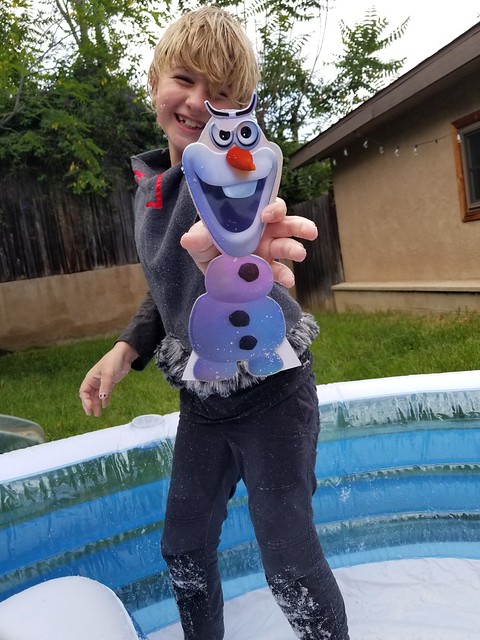 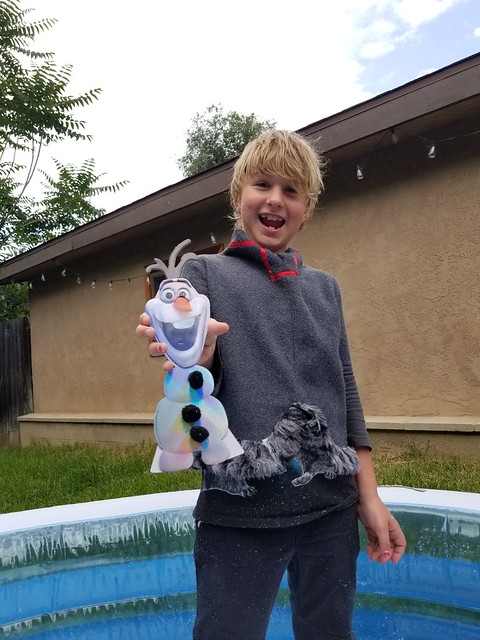 We wrapped up with some Ri-snow-tto for dinner while we watched Frozen II.    It was a really fun day, even for Thatkid who wasn't really looking forward to it, as he isn't as much of a Frozen fan as his little brother.

As soon as I started planning the day, I knew I wanted to make "Frozen" hot chocolate.  It just seemed fun, since the weather was warming up.  And then I started seeing all these Dalgona coffee posts on every social media site.  I'm not much of a coffee person, but as soon as I saw that it required instant coffee, I figured this would be something that could easily be translated to cocoa.

Instead of coffee, I threw some hot cocoa mix into the kitchenaid. 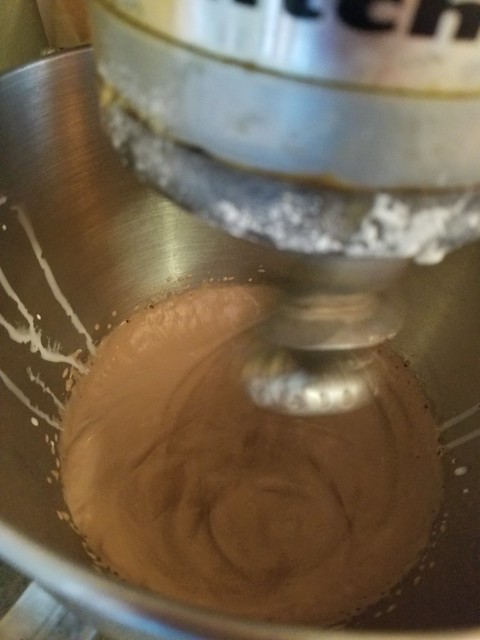 And a few moments later, I had a whipped cocoa! 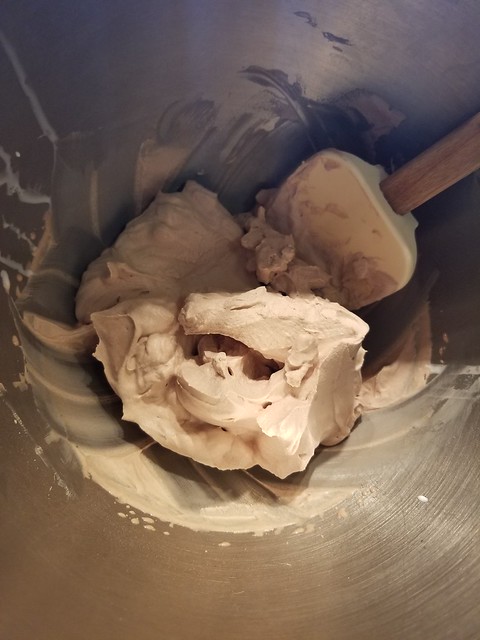 Which I used to top milk.  Word to the wise - This makes a lovely picture, but the milk is too high, making it hard to stir into without making a mess.  So, less milk in your glass!!! 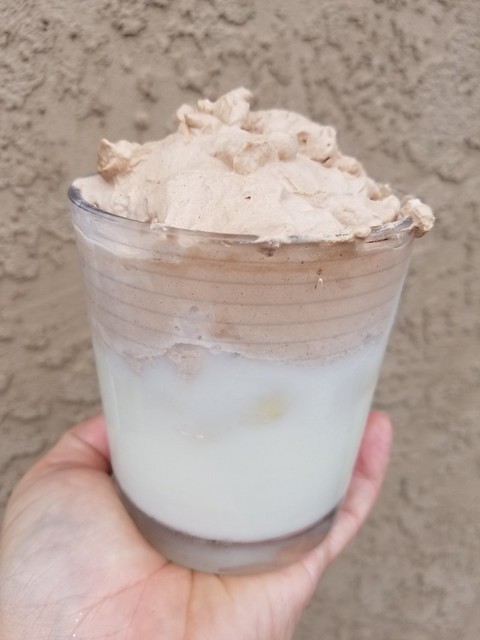