But the second half of the race was so lovely, that I vowed to run it again this year, for fun instead of time.

It was nice taking the pressure off and just being able to enjoy the run.   We showed up the morning of the race to grab our bibs and shirts.  Thatbaby, who has a keen eye for oversized characters quickly spotted the day's mascot.  And made himself like glue. 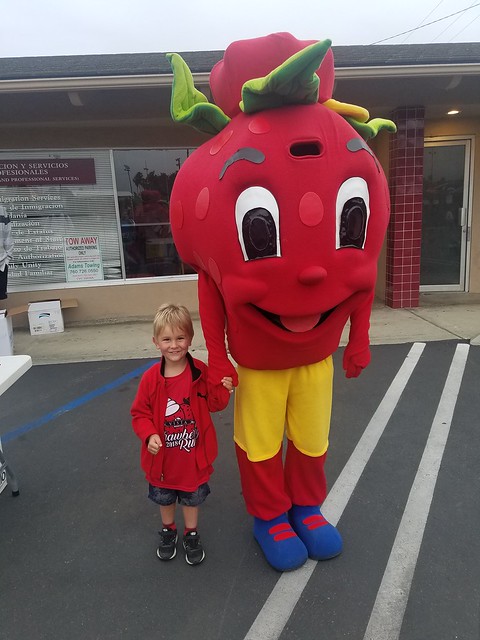 I managed to finally pull him away with the promise of giant strawberries. 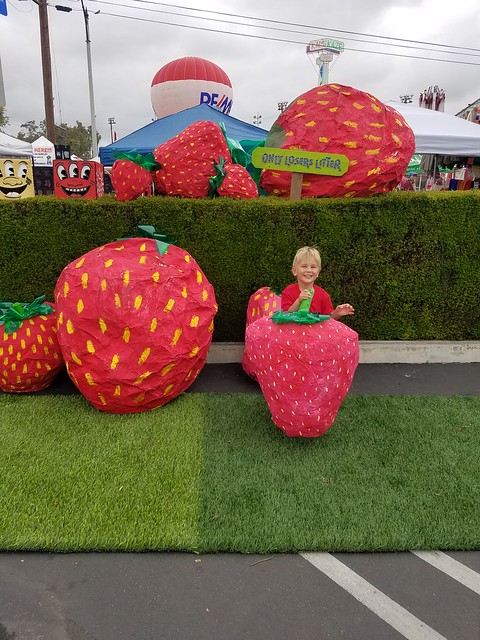 That lasted, for a minute.  There were a couple other trips to see the "Strawberry Man," but we made it through the day.

A little before go time I made my way over to the start line. 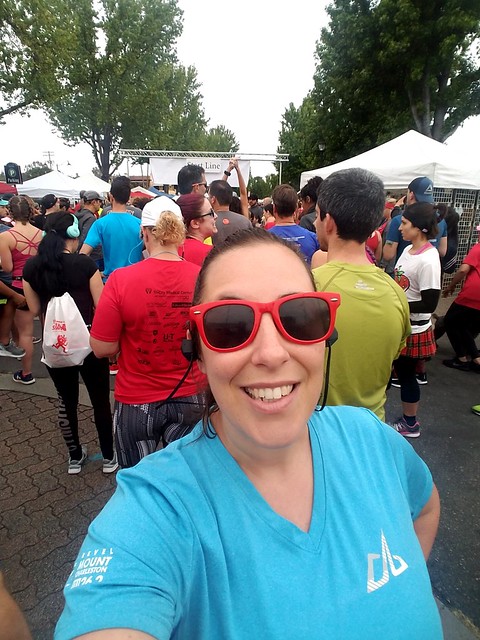 The first two miles aren't terribly exciting as you run along the main streets of Vista, past businesses, on the way to the park.  I missed the first mile marker, but spotted #2 shortly before we entered the park. 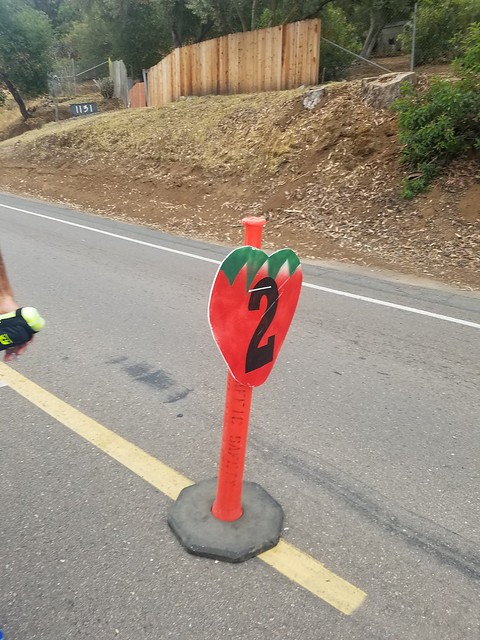 I also knew what that mile marker meant.  A little downhill dip into the park, and then that killer hill.  I put on one of my favorite songs at the moment and walked the verses, ran the chorus.
Hill Part 1: 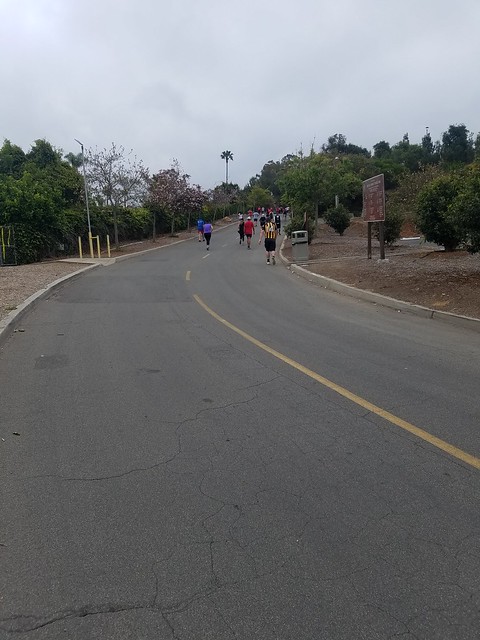 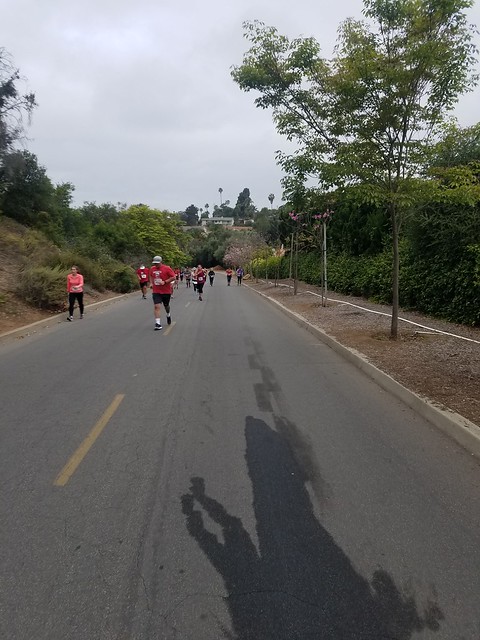 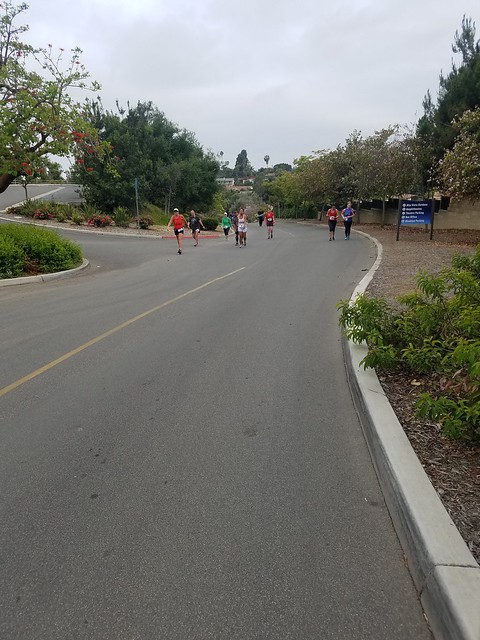 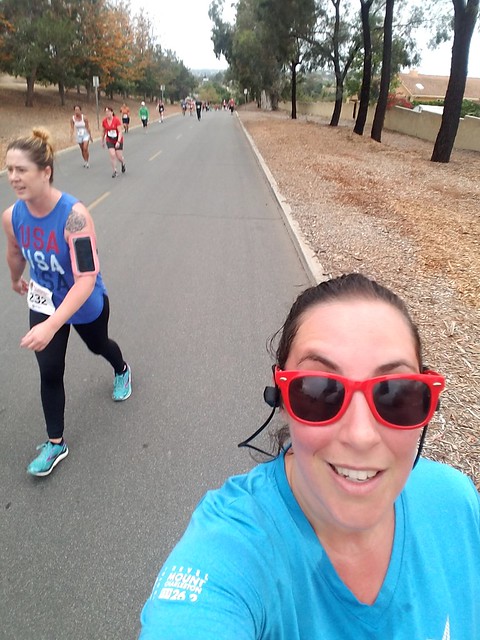 Then, finally, the top of the hill!  You can see I wasn't the only one taking walk breaks on this sucker. 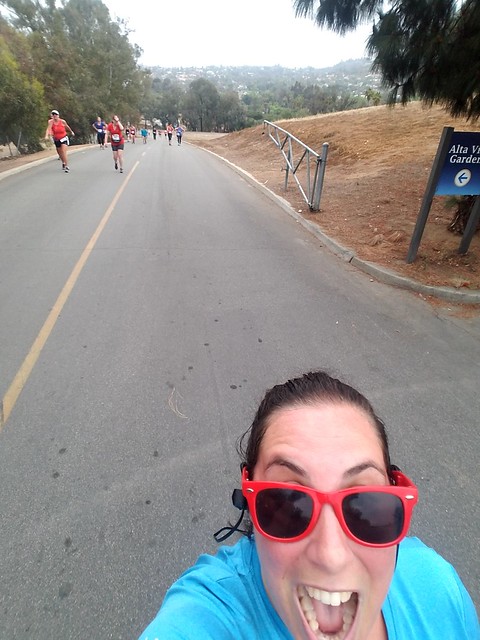 At the top of the hill, another runner told me what a great job I was doing.  It's a tough hill!  We chatted and she told me it was her first time doing this run.  That's when I told her the worst was over.  The next 3 miles were awesome and on a beautiful trail, covered by trees in most parts.  The best part of the whole race!  And then I ran off ahead.

That poor woman.  She must think I'm delusional.  Because they changed the course this year.  NO MORE TRAIL!  They got rid of my favorite part of the race.  The part that makes the entire thing worth it.   Instead we just ran back along the side of the street.  There were so many of us talking about it after the race.  We were all pretty surprised.

But we finished and I got my medal and strawberries.  I finished in 1:06, which was my standard 10k time before I started working on getting it faster, so even just having fun worked out okay. 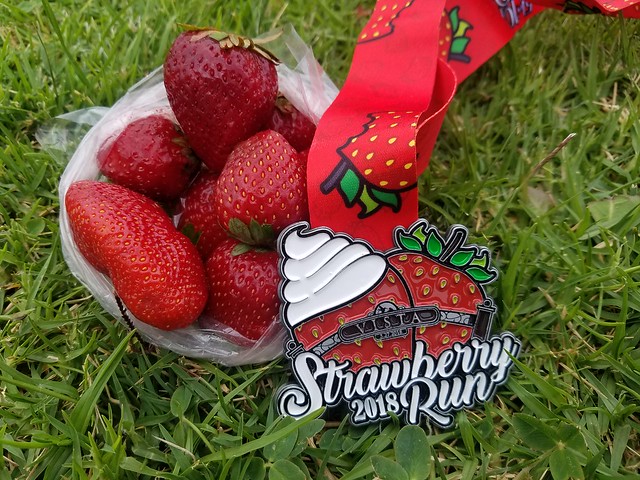 The post-run beer garden didn't disappoint.  Once again there were so many choices from a bunch of local breweries.  I ended up getting a mead from Twisted Horn which had strawberries and kiwi in it. 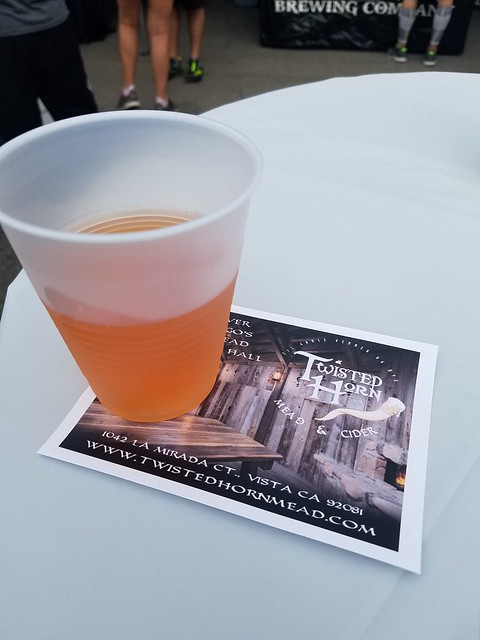 The kids had their races a couple hours after mine finished.  Thatkid's race was first.  He's aged into a new bracket and had to run a full mile.  He asked me to run with him, and I was happy to join him.  But most of the kids didn't have parents with them, so I kept asking him if he was sure he didn't want to just run with the other kids.  Moments before the race started, he gave me the go-ahead to be a spectator and we ran together to where Thatboy was waiting and I ducked out.  Then we all headed to the finish to wait for him. 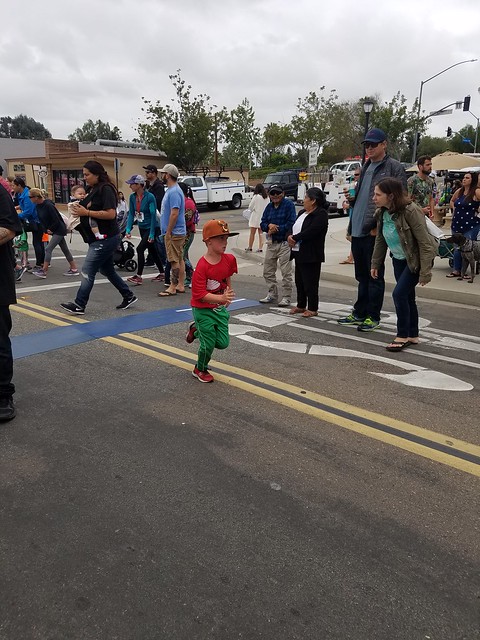 This year Thatbaby wanted to do the race too.  So I signed him up.  But I don't think he realized he would be split up from his brother, so as soon as Thatkid's race started he decided he didn't want to do it anymore.  I think seeing Thatkid finish changed his mind, so we headed back to the start. 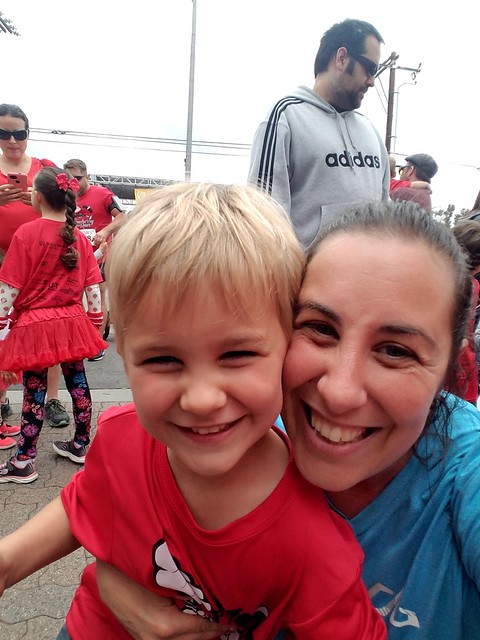 Thatbaby only had to run 1/4 a mile.  And I was definitely running with him. 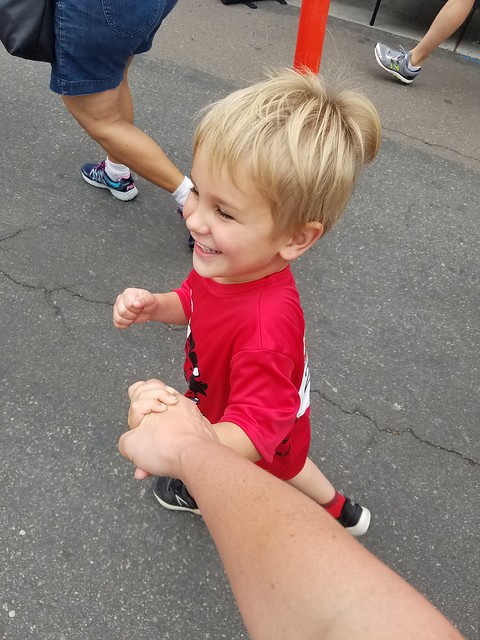 He was more than happy to grab his strawberries and medal at the end. 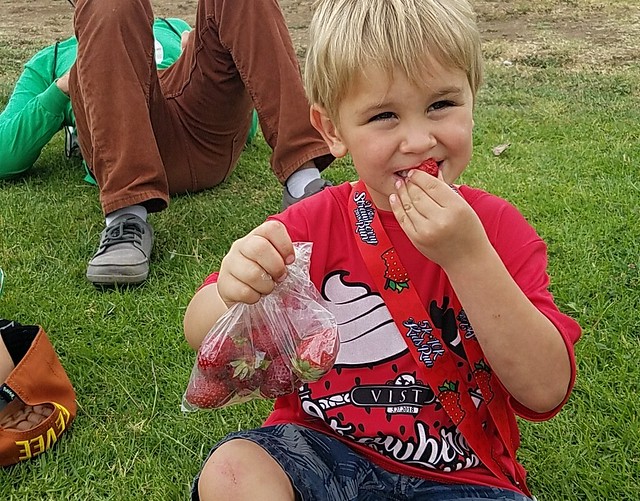 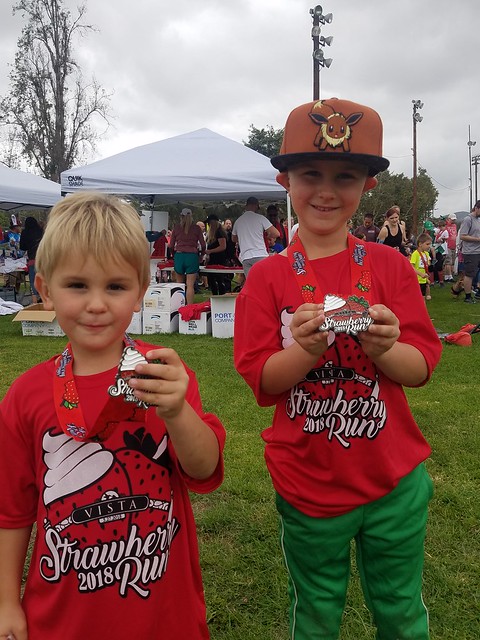 The three of us.  And yes, Thatbaby held the medal in front of his face in every picture we tried to take.  Toddlers. Man. 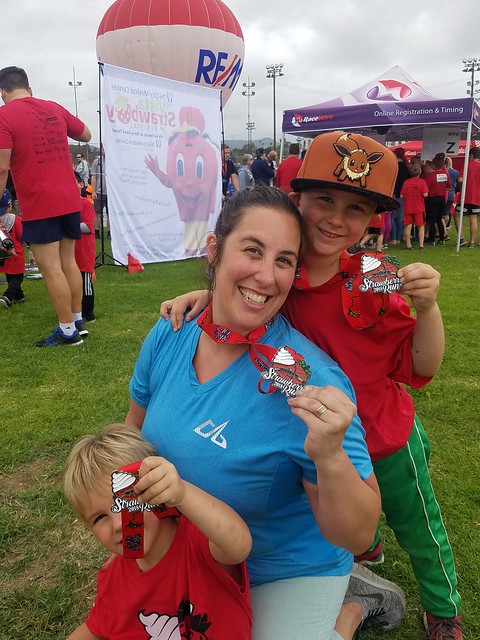 My gut feeling is that although I love the beer garden and the kids' aspect of the race, I don't know that I'll run this 10k again.  I don't love the course change and that was a major draw for me. The kids love the associated Strawberry Festival, so we will probably continue to go.  And maybe they will continue to run the kids' races - if they want to. 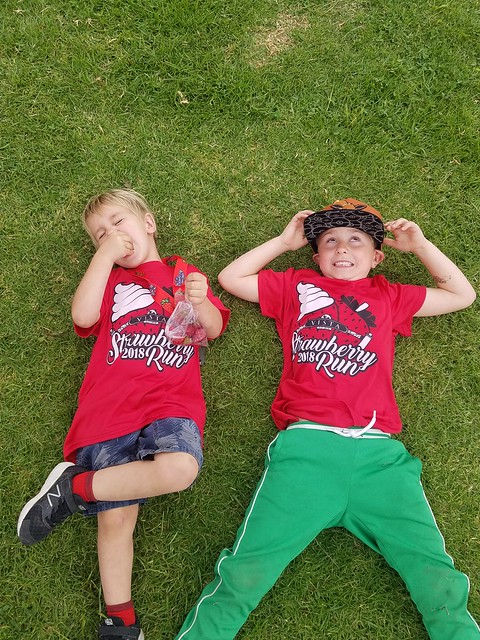