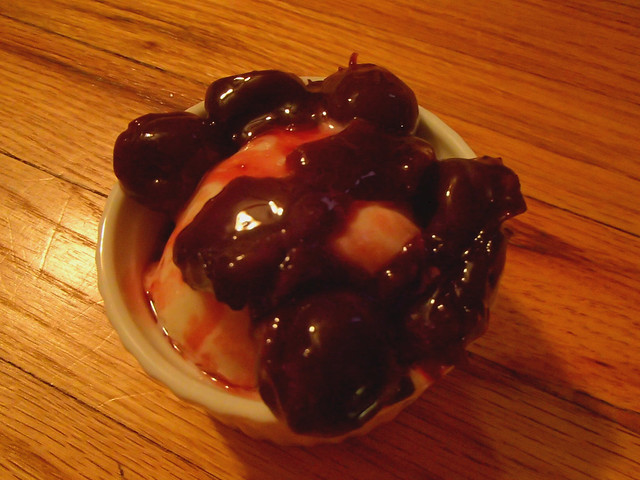 On Mother's Day we were very much doing things that I enjoy doing, what with going to see camels and all.  Typically on Father's Day we go to the waterpark, but that's not exactly what Thatboy wants to do.  It just became convenient when Thatbaby was a week old and I couldn't see us spending a whole day at the beach with a newborn.  And a tradition was born.

But this year, he said he wanted to do something "nature-y" "like a hike or something."  So, in the midst of figuring out what I wanted to do for our birthdays, and planning a birthday party, I also started doing some research on local trails.  We've done quite a few which Thatboy has not been impressed with.  And some of the ones I thought he would like would NOT be enjoyable with our children.

But then I came across some reviews for the Santa Margarita River Trail, which stated that it was a nice easy trail, with scenic views as you walked along a river.  It sounded great, and so I forwarded it to Thatboy and asked what he thought.  He gave it a thumbs up.

Father's Day started with our usual trip to the Original Pancake House for breakfast, which is Thatboy's favorite breakfast locale.  And then we picked up some sandwiches and headed off to the trail.

True to the description, it was a lovely trail, under the canopy of trees, which is rare here in San Diego.  Most trails offer little to no shade, but this was shady and cool.  The river provided some nice background noise and some pretty views. 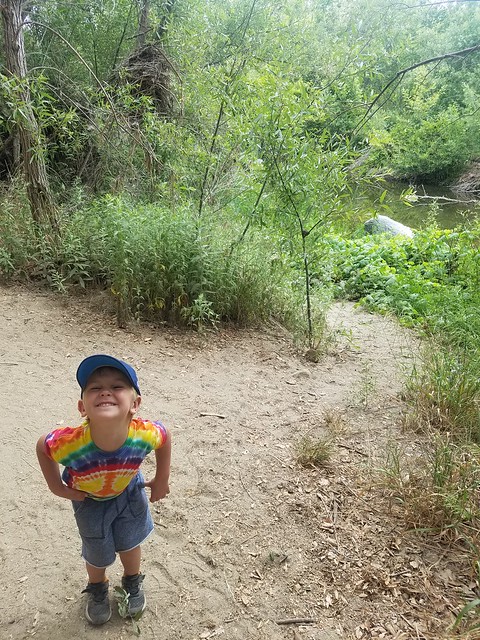 The trail was fairly easy, with only a couple of places where we had to weave through some rock scrambles.    The biggest hazard on the trail was the poison oak which was everywhere.  I had to remind the kids a number of times to stay in the middle of the trail. 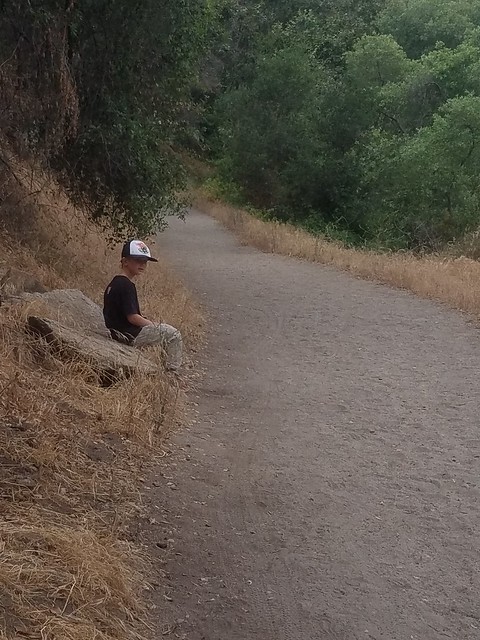 The entire trail is about 2.5 miles long.  So we had to take a couple of sitting breaks on the way out, and the way back. 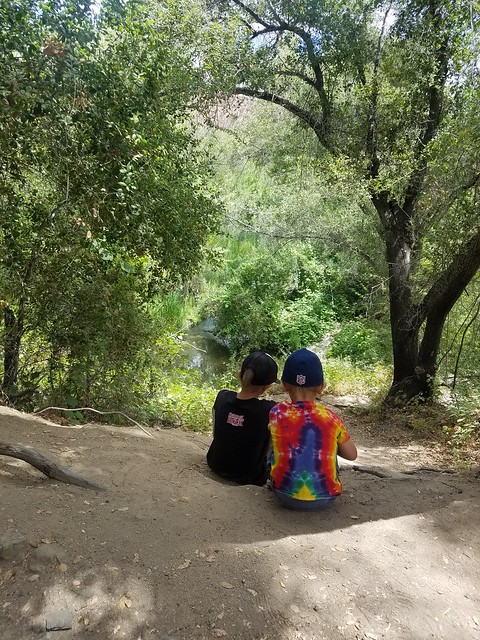 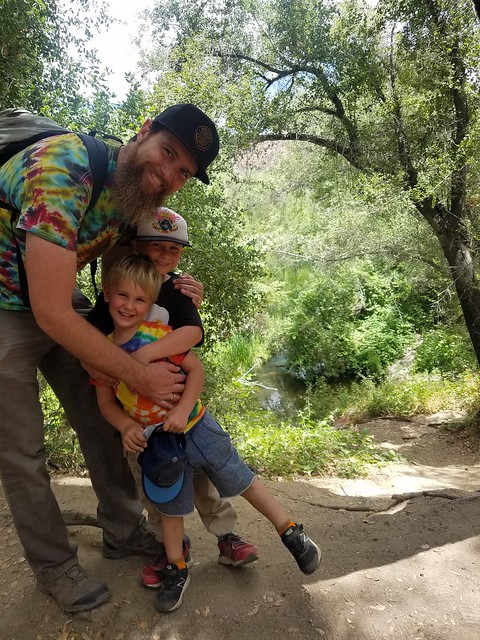 At a certain point, we reached an outcropping of rocks, and the river.  There was no way I was going to try to cross or ford the river to get to the other side, we decided to call this the end of the trail and sit and eat lunch. 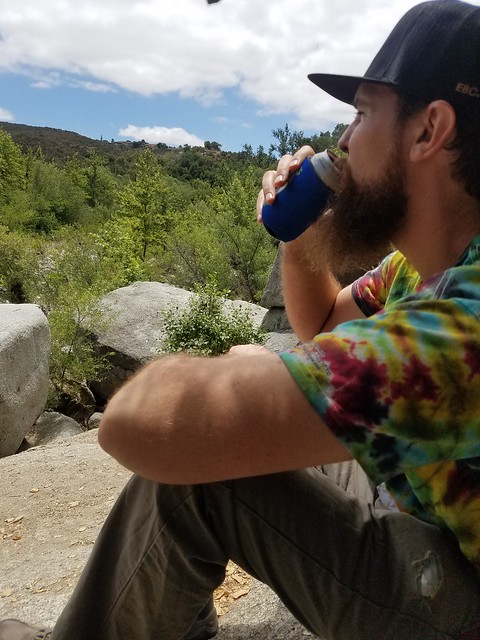 Thatboy and Thatkid spent some time playing on the rocks, while I sat with the more cautious and less coordinated Thatbaby eating blueberries. 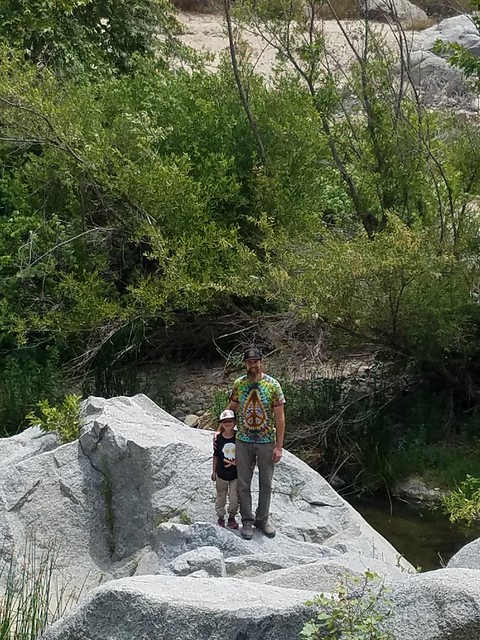 Heading back wasn't as successful as heading out.  There were some more breaks, and begging of Thatboy to drag them home. 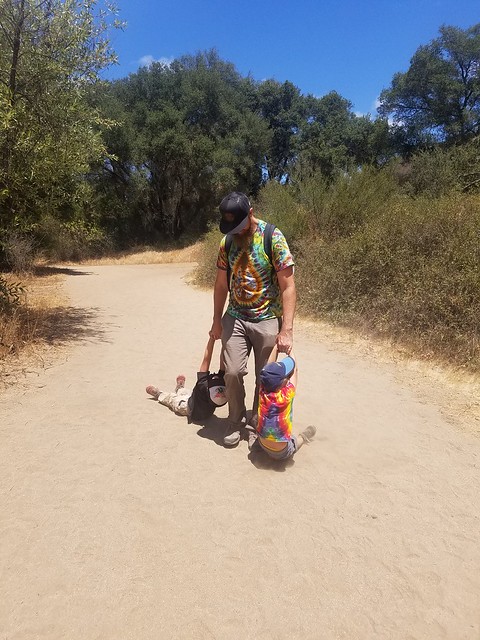 Thatbaby promptly fell asleep on the car ride home, and I gallantly sat in the car with him while Thatboy and Thatkid went into the house.  Around 4:15, Thatboy came out and asked if we could head to dinner, which woke up Thatbaby.  But then we head to dinner.   We tried a new place not too far from us, and it was fantastic.  We ate and drank, and had far too many desserts. Of course, I forgot to take any pictures.  But I'm sure we'll be back.

But since we're in dessert mode...we've been doing ice cream a lot lately.  I shouldn't say "we" since I'm not a huge ice cream person, but the boys have.  Thatboy has requested having it in the house, and so it's there.  I have been having fun playing with toppings.  We've got leftover chocolate and caramel sauce from Thatbaby's birthday party.  And a bag of cherries in the freezer were just begging to be put on top.  Boiled down with sugar and cherry liquor and it adds a very elegant topping to what could be a rather commonplace dessert. 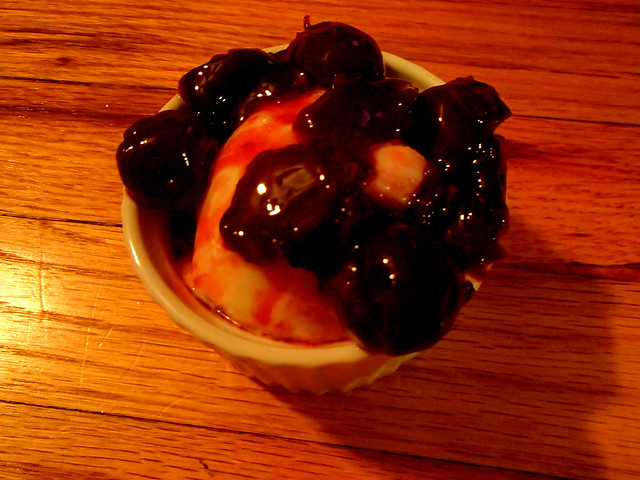