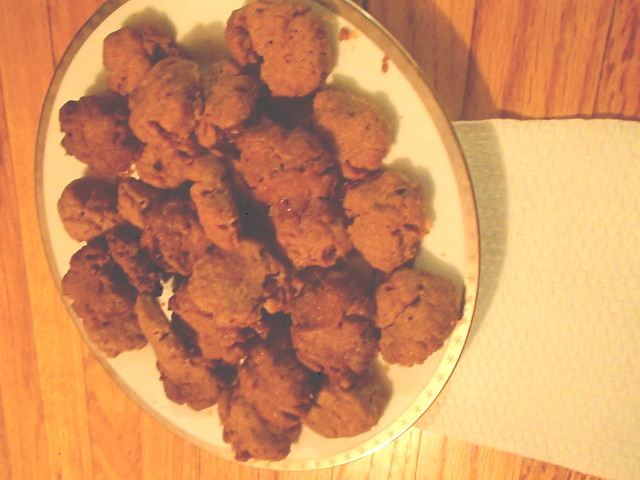 It's fair time again!  It comes around every June and while it's not quite the same with kids as it was when it was just Thatboy and I, it's still an event we wouldn't miss. 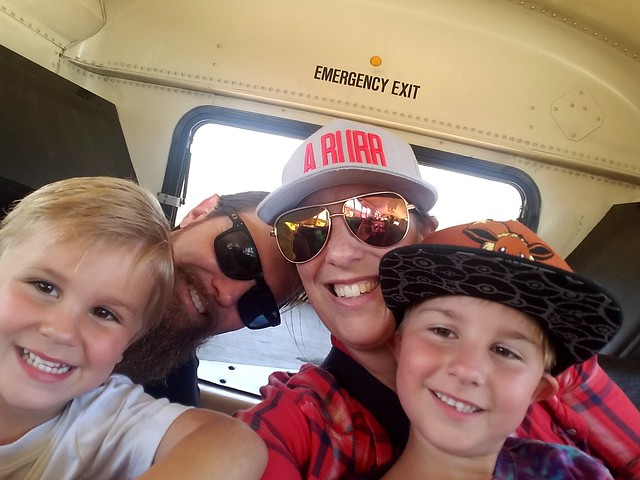 This year's theme is "How Sweet It Is."  It was a candy colored wonderland! 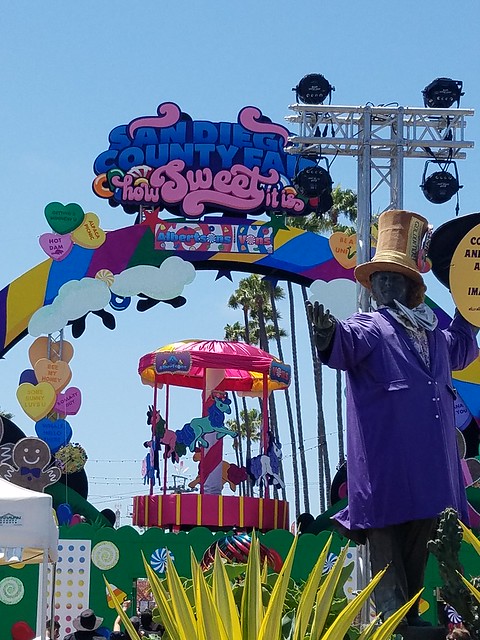 They advertised a "chocolate river" which was really a brown carpet, but it's hard to be disappointed when there's a giant candy mountain. 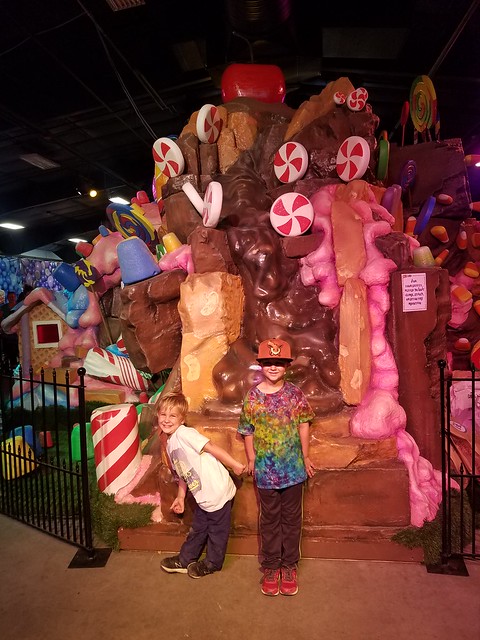 A couple of weeks ago, one of Thatkid's classmates brought in the Jelly Belly Beanboozled game.  He's been all about it ever since.  So he was super de dooper excited to see a giant version of the game.  Spin the wheel, get a mystery bean that could be a delicious flavor, or could be something disgusting. 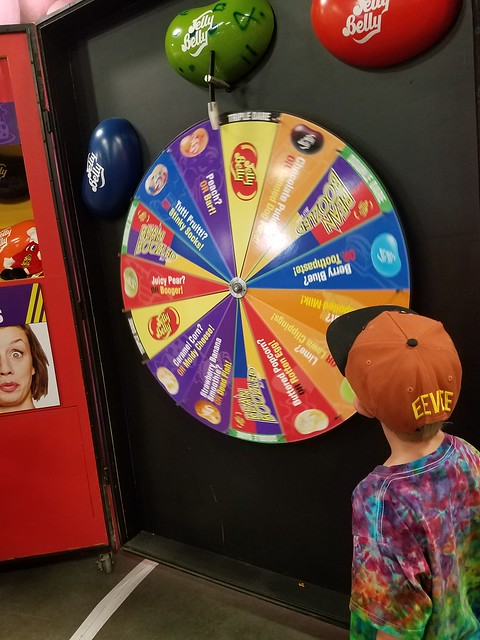 Thatbaby wasn't going to pass up an opportunity for candy either.  Even if it was stinky sock flavor.  (For the record, he claims he got a yummy flavor, but it's hard to tell with 2 year olds.) 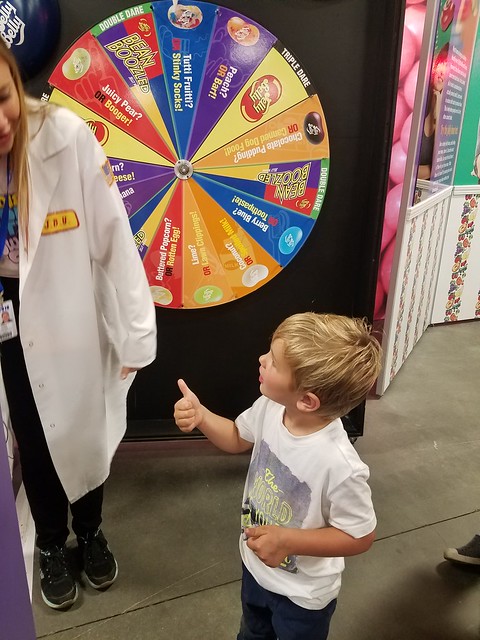 There were art installations made entirely of jelly beans. 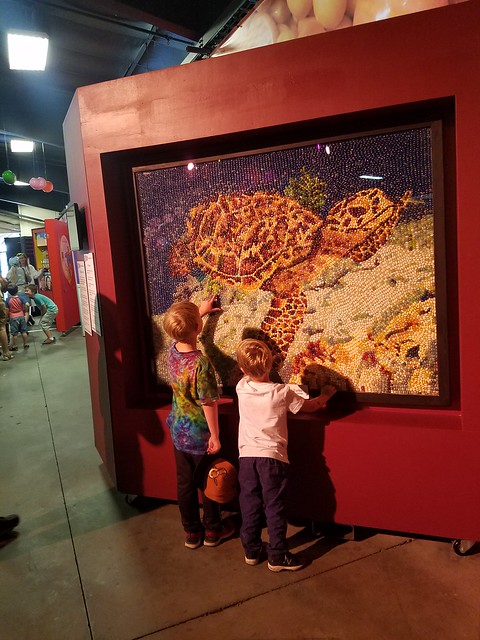 And of course, a giant candy store. 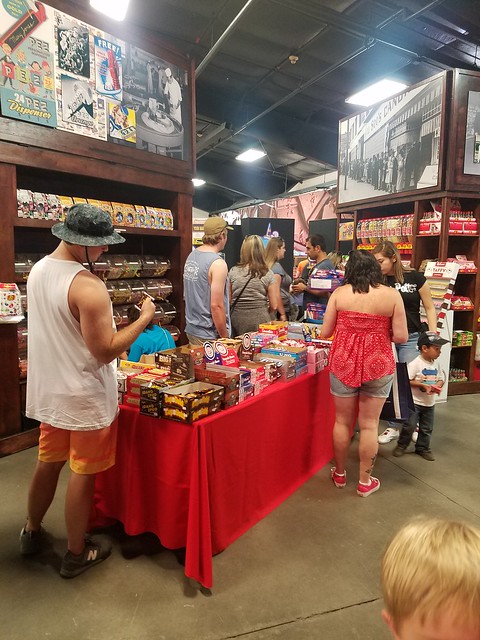 I'm not sure why there was a Zoltar machine, but the boys got a kick out of it.  And managed to stay in their kid bodies. 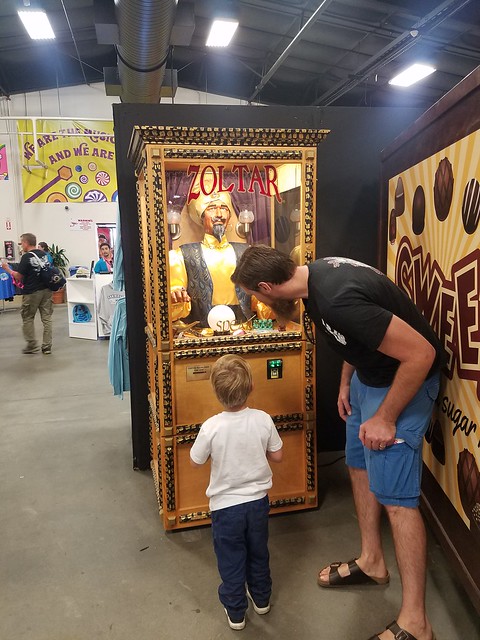 Thatkid's one request was to watch the pig races, which we had never seen. 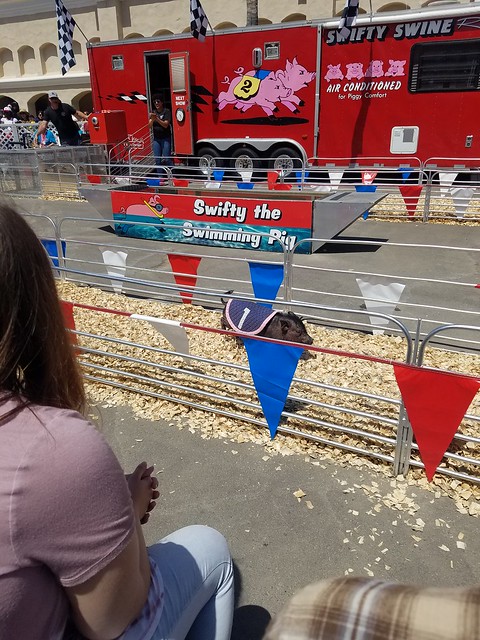 Thatbaby even got picked to be the cheerleader for our section (our pig lost). 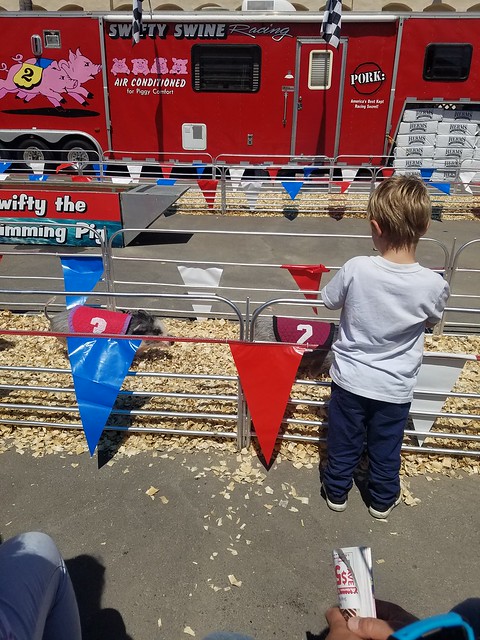 We stopped to look and pet the animals.  Thatkid took a quick detour to do a little shopping game... 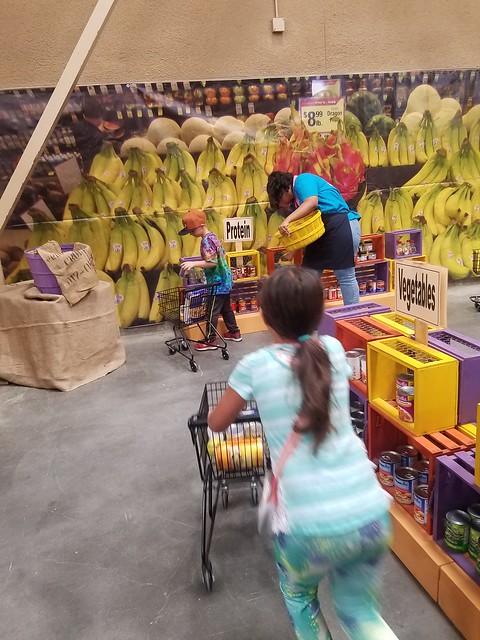 While Thatbaby tried out some of the heavy machinery. 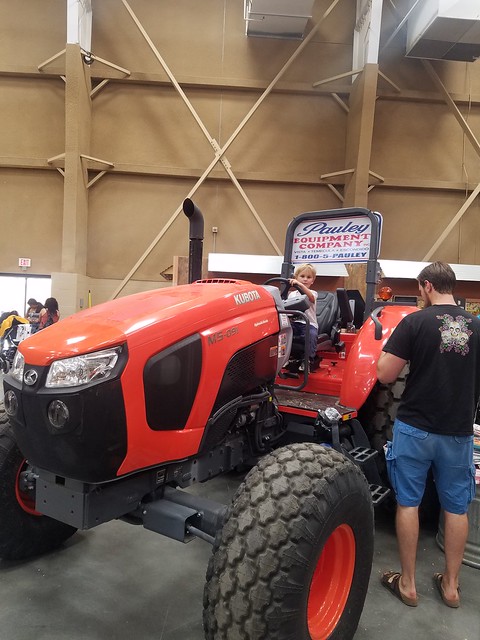 Then it was time for rides. 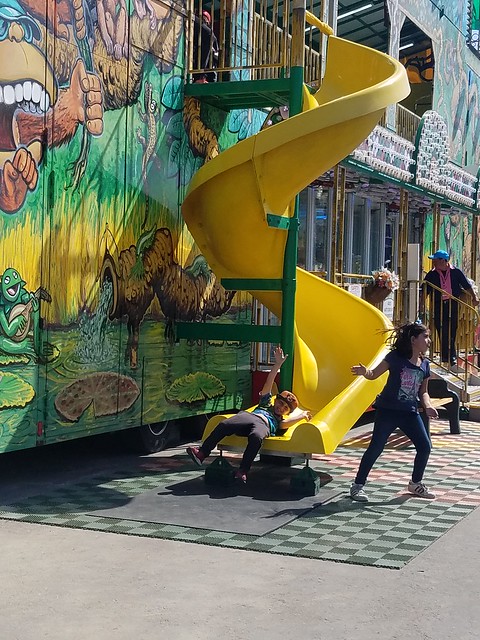 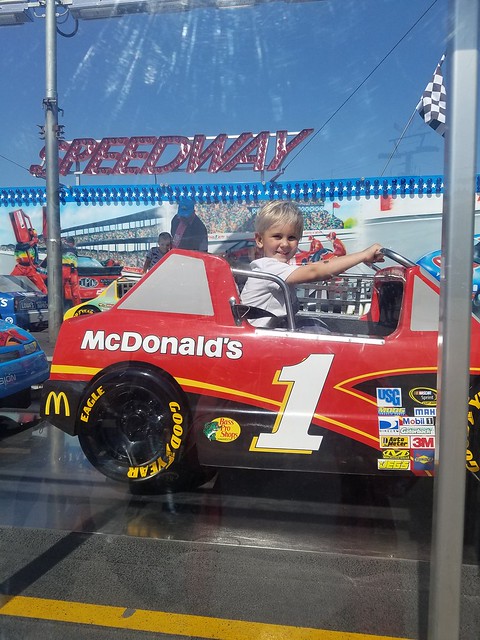 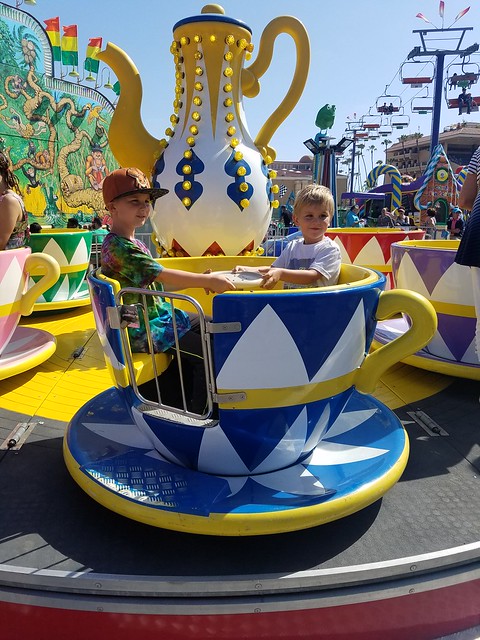 We played some games, went and looked at the rocks and minerals, and then grabbed some dinner.  I've always been intrigued by the Australian battered potatoes, so I gave them a try.  They were fine, but way too heavy and greasy for me.  So much so that I had to forgo my typical funnel cake. 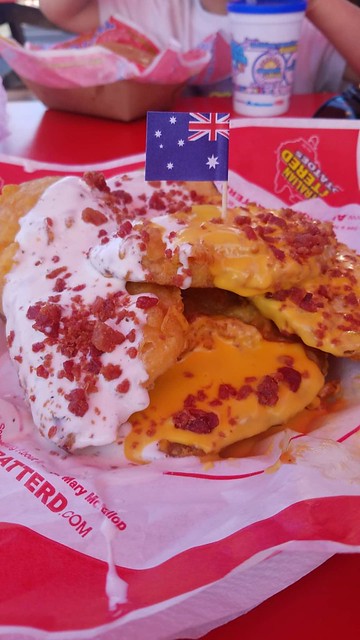 Thatboy and Thatkid split the fair's most talked about item - a cotton candy ice cream sandwich.  Thatboy, who makes it a point to try the latest and weirdest fair food thought it was the best fair dessert he'd ever had. 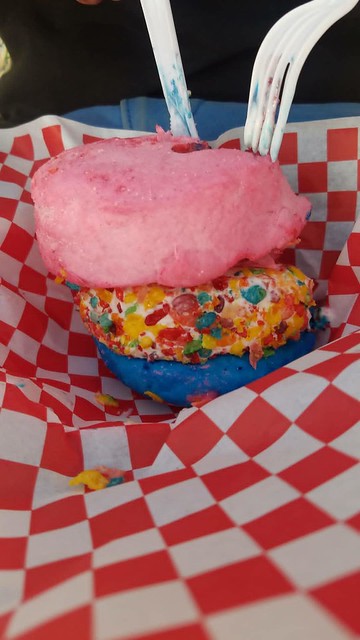 I'm a little bummed about missing out on my funnel cake, but I just can't eat like a kid anymore.  Less oil, less fried.  More...cookies.

Baked goods seem to be a much easier way for me to get that sweet fix.  Not as "fun" as fair desserts, but easier on the stomach.  And these cookies feature one of my favorite childhood treats - chocolate covered toffee.  I used to love Daim chocolate bars. I don't even know if you can get them any more, but chocolate covered toffee isn't that hard to find.  Chopped and put in a cookie, it's like a chocolate chop cookie, but so much better!  A little bit of a weird twist - not quite as weird as ice cream sandwiched between two pieces of cotton candy. 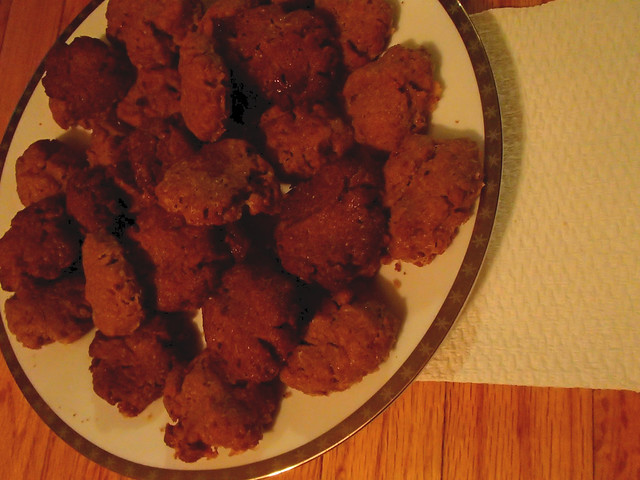