Shoving as much Christmas into a day as possible 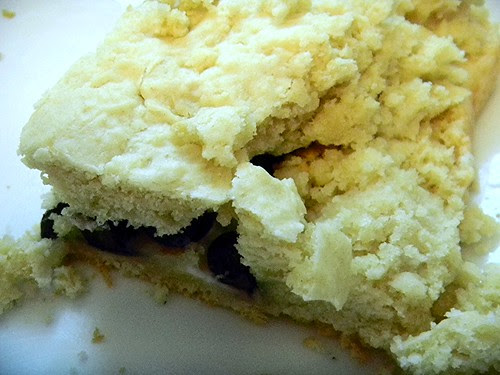 Are you Christmased out yet?  Lying there with your stomach full of candy and egg nog, strewn wrapper and ribbons surrounding you, all the shiny new toys already starting to lose some of their novelty?

Well I'm here to bring back some of that Christmas cheer you're already running low on.  Just for one more day.  But boy, was it a full day.

As most of you know, Thatboy and I traditionally journey up to his parents' home for Christmas, where we go about doing exactly nothing holiday oriented, or cheerful, or even fun.  (In fact, I am sitting here writing this on Christmas Eve while Thatbaby naps, Thatboy sets up Thatbaby's Christmas present, and the rest of his family plays on their respective computers/video games.  Our grand plans for tomorrow include going out for Chinese food.)  Keeping that in mind, we tried to give Thatbaby a lot of Christmas fun before we headed up to the land of miserable people.

We began with the Jingle Bell Run - something I've done every year for the past 3 years. This year it was pouring rain, but it let up as we headed out, and had dried up by the time the race started. 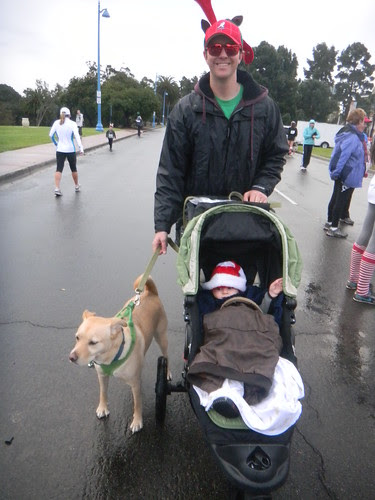 Unfortunately, the inclement weather meant there were less participants than usual, and a dearth of fun costumes among those who did show up.  Thatbaby was undeterred by weather though, kicking his feet throughout the race so that he could jingle all the way. 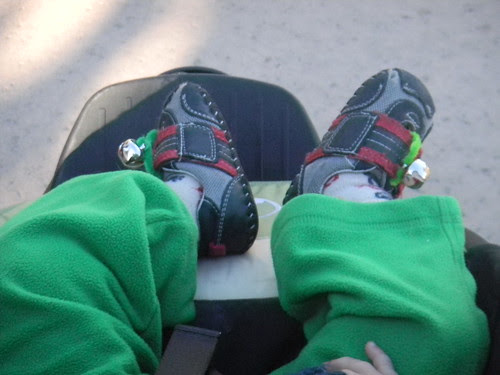 Thatbaby's level of participation continues to grow along with him.  Last year he slept a lot of the race, in his infant carrier in the stroller.  This year, he got to "run" a little bit - stroller free.  He even crossed the finish line - his first finish with his own two feet! 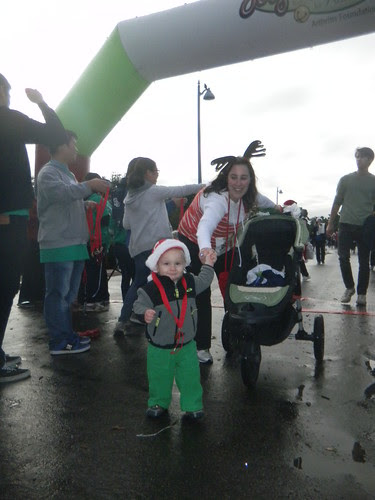 He was pretty proud of his medal, wearing it for most of the day. 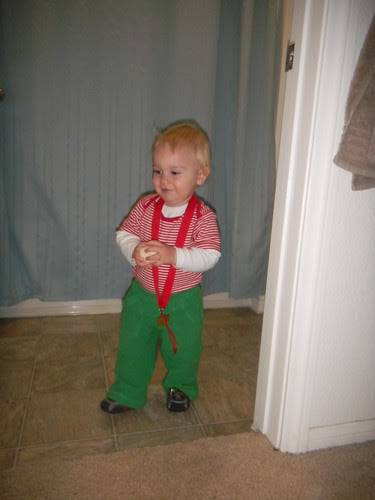 After we got home from the race and dropped off Thatdog, we headed out to Coronado to check out the decorations and The Hotel Del. 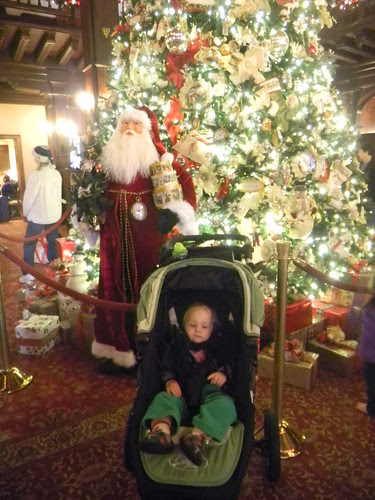 I believe Thatbaby could give McKayla Maroney a run for her money with his unimpressed look.

He did, however, love going out to the beach and running around.  Oh the joys of living in Southern California in December. 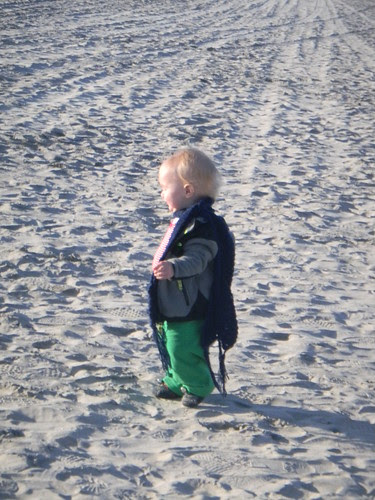 We may not have snow, but we can still make sand angels! 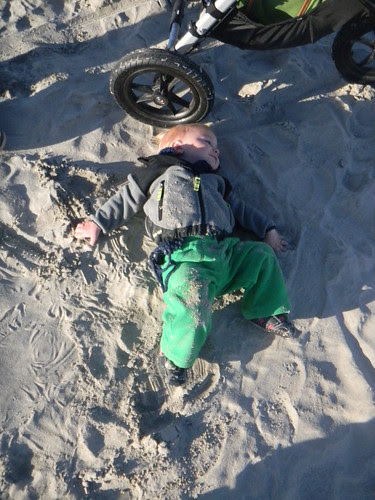 We sat at the Del, watching the ocean and drinking hot chocolate, apple cider, and water (you can guess who had which).  And as the sun started setting, we headed up to the Garden of Lights at the San Diego Botanical Garden. 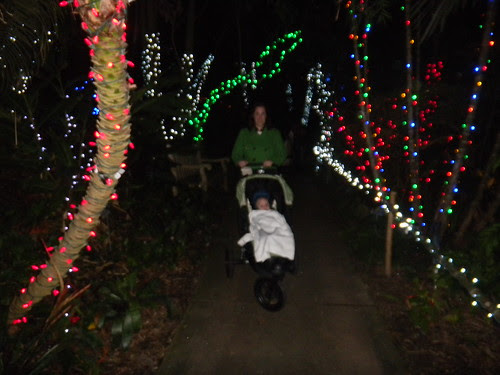 Last year, Thatbaby loved looking at all the lights, and was fabulous with Santa Clause.  This year, he seemed a little disinterested in the whole thing, and decided this Santa fellow was not someone with whom he wanted to spend time. 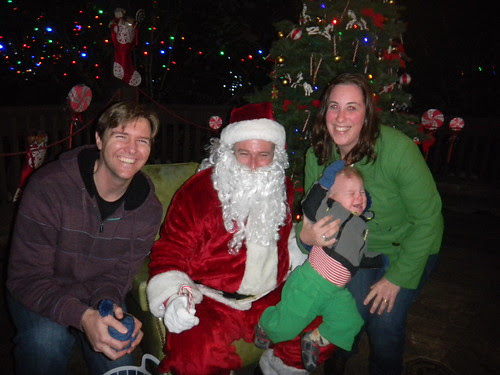 In my quest to get my child to accept candy from strangers, we thought maybe we could turn his frown around by having Santa present him with a special treat. 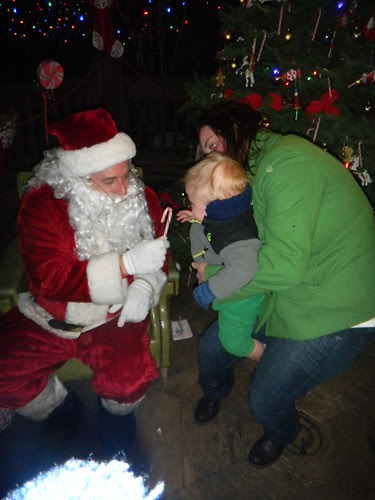 Which worked just long enough for him to get the candy in hand.  He still looks a little shell-shocked, right? 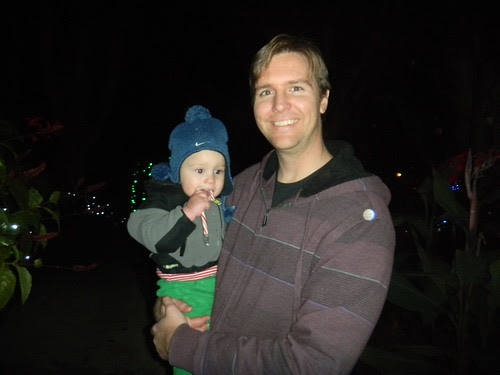 Alright, that concludes our Christmas round-up...until we get back from the inlaws and I can post about Thatbaby's actual Christmas experience.  You know, with the presents and wrapping and how he handles services tonight.  And for those of you tapped out from heavy Christmas meals, here's a light, refreshing treat.  It's still a dessert, but a light one, to help ease you into your new year's resolution.  It was inspired by some perfect winter berries I picked up.  Because blueberries are not supposed to be this delicious in December.  But these couldn't have been sweeter, and layered between buttery, flakey, shortcake makes it a treat that'll hold you over till summer. 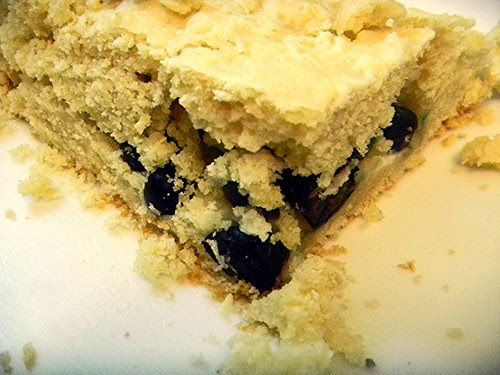