Welcome to part 2 of my toy series!  Here are Thatbaby's favorite toys from 6-12 months.  This is the time when he really started understanding the concept of toys and playing, and developed clear favorites - toys he continuously would seek out to play with.

Whacky Ball
This is far and away Thatbaby's favorite toy and my number one recommendation for the ages of 6-12 months.  For Thatnephew's first Christmas, Thatboy and I gave him a ball pounding toy.  It was his favorite toy for years.  TSIL wanted to return the favor and get Thatbaby what would surely be his favorite toy.  We were a little skeptical at first, given that the age limit was 1 year and Thatbaby wasn't quite 6 months when the toy arrived.  We put it away for a couple of weeks, but one day opened it up.  And Thatbaby has been hooked ever since.  He didn't get the hammer part right away, or even the holes.  But he loved the balls.  He would carry them around with him all the time.  When he started crawling, he still held them.  We called him "Edward Ball-hands" as he crawled around holding a ball in each hand.  Then he got the holes and started putting everything in them - both the balls and any of his other toys that would fit.  Then he figured out that if he pushed the balls in the holes, they'd roll down.  Now, at 14 months he even can hammer them - although he still prefers pushing them with his hands. 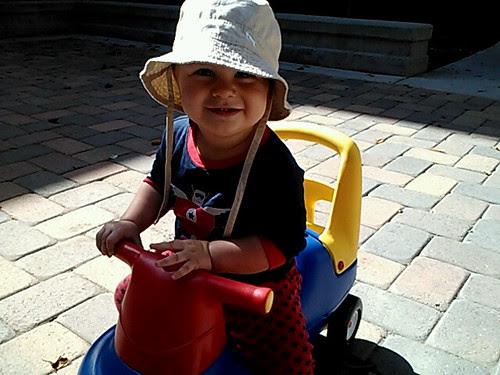 Push and Ride Racer
Push-toys are very, very popular for this age range.  This was a gift from Thatmom and we credit it fully with Thatbaby learning to walk.  When we saw his pediatrician for his 12 month appointment the doctor theorized that given Thatbaby's ability to bear weight on his legs so well, and even stand for moments, he probably just lacked the confidence to walk.  Being able to push this toy helped him get the confidence he needed to start walking just a few weeks later.   He loves pushing it around, and loves to be pushed on it - making a vroom vroom sound when he gets to go fast.  Although, his new favorite feat with this toy is standing on it and holding his arms up like an Olympic gymnast before clapping at his daring feat.  Oh yes, we'll be visiting the ER frequently in his lifetime. 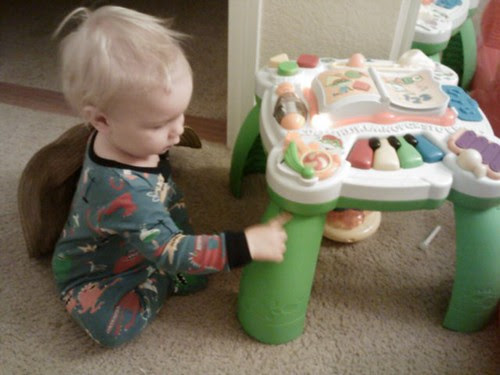 Leapfrog Learn and Groove Musical Table
I picked this one up spur of the moment because it was on a super sale at Target. What a good idea!  Sometimes I'm so very smart.  Thatbaby is such a musical genius - or at least he loves music, so he loved having this table to play music on.  Each piece makes a different sound or song.  And he's a groover, so he dances while he makes music.  We picked this up when he was around 10 months, after daycare mentioned that we should probably help him work on his leg strength, and pulling up and standing beside the table certainly helped him with that. 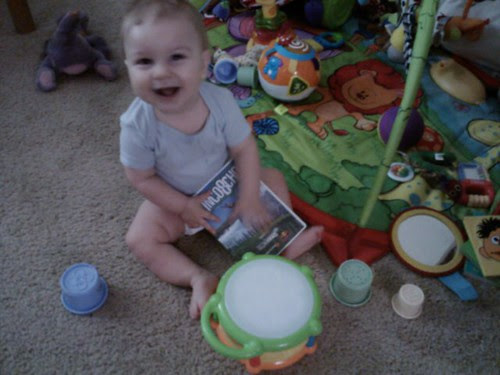 I mentioned Thatbaby loves music.  His favorite thing is drumming.  He loves banging on drums!  Or drumlike things.  Or turning things into drums if they're round.  I'm hoping we have a little Keith Moon on our hands.  This drum lights up when you bang on it, and the music really isn't all that annoying - which is impressive since most kid's toys have the most annoying songs.  The handle means he can carry it from room to room with him and play for us.

Most of Thatbaby's favorite toys were gifts - these are no exception.  Thatboy received a host of toy cars for his birthday, and he loves every one.  He loves to make them vroom vroom.  He loves the top toys that work so well on our kitchen floor and shake, squeek, and are easy to pick up and hold.  The purple truck is his favorite.  The bottom car, with it's built in handle, is his favorite for carrying around.  It is often found in the car with us, or my diaper bag.

We are always aiming to encourage Thatbaby's reading endeavors.  So when we got a note home from daycare that he had spent literal hours flipping the pages of the above book, I ordered it the next day.  Thatbaby loves books, but soft books ruled at this stage, allowing him to touch and feel as he read. 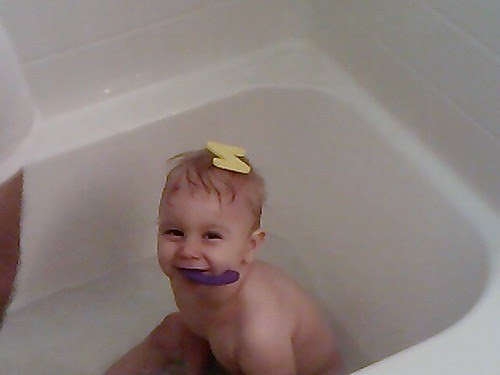 Thatbaby loves bathtime.  His favorite thing to do is try to stand up in the tub (remember how I mentioned I predict hospital time in our future?) The foam letters keep him seated while he plays with them.  And Thatboy turns them into a fun teaching lesson, spelling words on the sides of the tub. 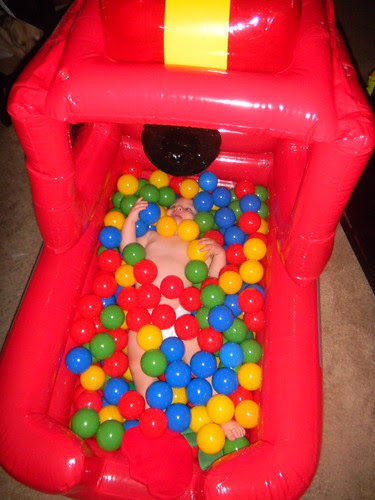 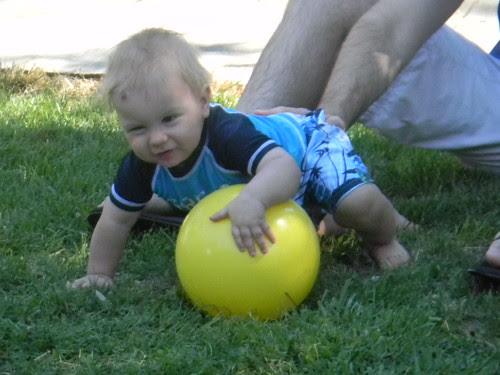 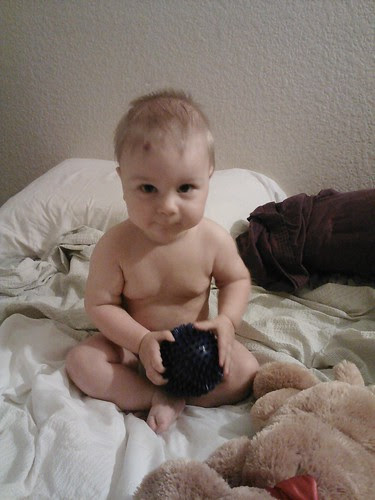 No links necessary here, because there is no wrong ball.  Thatbaby loves balls - big balls, small balls, hard balls, soft balls, balls with bumps, balls that make noise - this kid is ball obsessed.  And the nice thing about balls?  They're relatively inexpensive, you can find them just about anywhere, and most of the time they don't make much noise. Stacking toys
This is another one of those toys that is really geared for older kids.  Thatbaby didn't get the stacking aspect at first, but he liked to play with the pieces.  And then he got into stacking.  He's still not fabulous at stacking them in the right order, but he likes to take them on and off the poles.  He has a couple classic wooden stackers and a plastic one that lights up and makes music.  He loves them all. 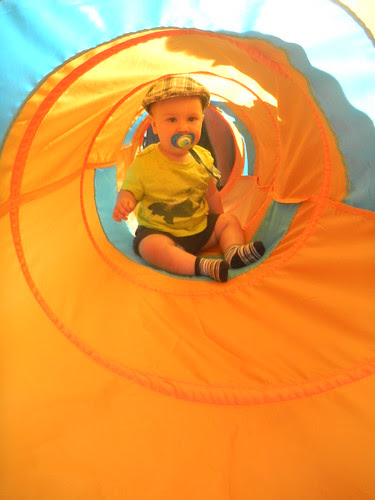 Tunnel
I blame L&O for this one.  Thatbaby fell in love with the play tunnel Little LO had at his birthday party, so we had to get him one of his own.  It collapses into a flat disc, which he constantly brings over to us so that we can set it up for him.  And then he crawls through it again and again.  Because it collapses it is ever so portable and easy to bring with us just about anywhere.