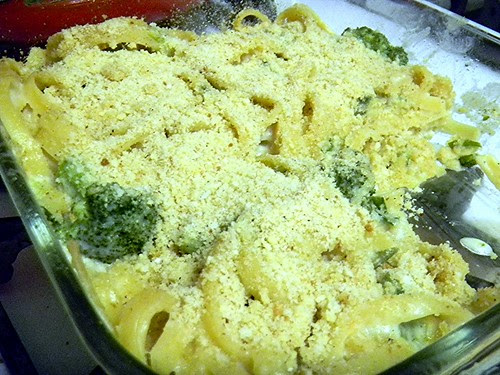 Last weekend, Myrtle's daughter Tres turned 3.  And tradition in that family is that your third birthday is spent at Farrell's Ice Cream Parlor in Mission Viejo.  We were invited to enjoy in the festivities, so of course we made the trek up.

And enjoy in the festivities we did.  I was a little worried how Thatbaby would handle being in a restaurant for hours, but he had a fantastic time from the moment we entered.  There were so many bright colors and things to look at.  And he got his first encounter with a balloon artist. 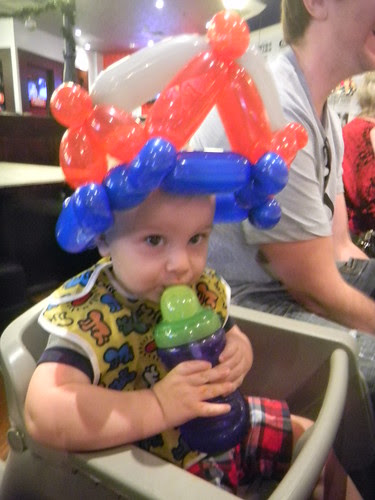 The noise level in Farrell's was...high.  About every 3 minutes the serves would come through, banging drums, stamping feet, singing songs. Thatbaby loved every second.  Each time they would come around, he would start dancing with his feet and waving his arms in the air.  It never got old. 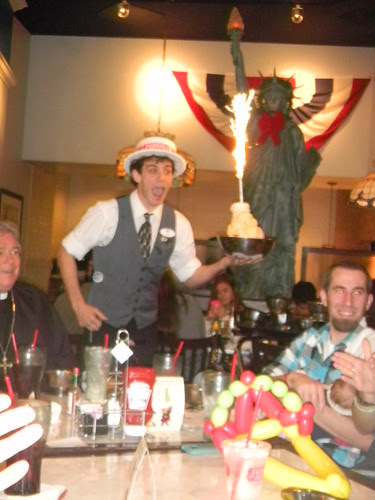 Tres was equally excited about the singing and dancing, especially when they came to sing her happy birthday and present her with her sundae.  She stood right on her chair and danced along. 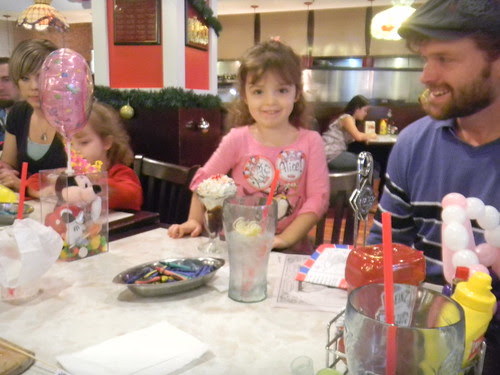 The last card in this winning deck of balloons and loud noises was the ice cream itself.  Thatbaby was so excited to share a sundae with me.  He only got the vanilla ice cream part, but I don't think he really missed the fudge.  Looks like someone takes after his dad in the loving ice cream department! 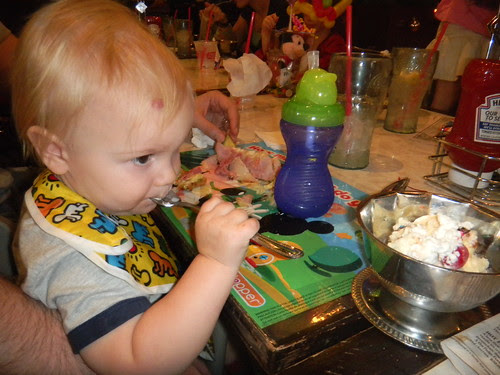 I'm sure both Thatbaby and Thatboy would love to have ice cream every night for dinner,  but I'm not so interested.  Especially given that it's been super cold out lately.  And I'm the crazy person who doesn't like to eat ice cream when it's cold.  I'd much prefer something warm and creamy instead of cold and creamy.  Which is why I turn to pasta in the winter months.  We eat pasta in the summer, dressed with ripe tomatoes and fragrant basil.  But in the winter, a baked pasta in a creamy sauce seems much more appropriate. 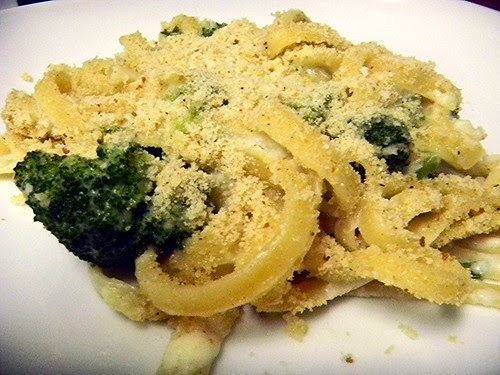 Baked Fettuccine Alfredo
2 Tbsp olive oil, divided
1 crown of broccoli, trimmed and chopped
1/2 lb fettuccine
4 scallions, chopped
1/4 tsp thyme
salt and pepper
1 Tbsp butter
1 Tbsp flour
1 cup milk
1/2 cup mascarpone
1/2 cup parmesan
1/2 cup breadcrumbs
While we waited for the pasta to cook, we did our nightly Channukah celebration.  Kind of.  I actually got my Christmas gift early.  Typically Thatboy and I do small gifts for each night of Channukah, with our big gift exchange on Christmas morning.  But last night I got my big gift! 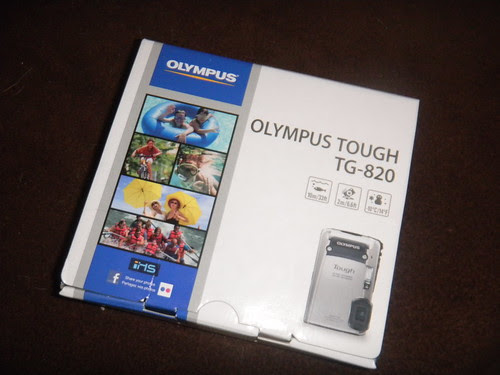 You may or may not remember that my old Olympus died on our Hawaii trip the summer of 2010.  That black friday we got a killer deal on a Nikon.  Which I promptly hated.  I missed my Olympus!  But, since we don't have the money to go buying camera after camera, I sucked it up.  I mean, the Nikon was fine and it's not like I'm exhibiting my photos in any museums.  Last fall, right before Thatbaby was born, the Nikon died.  Just wouldn't power on.  I brought it in, and Nikon sent me a brand new replacement!  So at least they have customer service going for them.  Well on Tuesday, the Nikon died again.  Thatboy, who was sick of my stupid Nikon went out and got me a new camera, while I took the Nikon in to Best Buy where they fixed it within seconds.  Because he wanted me to be able to use the camera for the holidays, and because he didn't know the Nikon was fixed, Thatboy gave me my Christmas present last night.  I feel a little extravagant with 2 working cameras, but I am so excited to have an Olympus again! 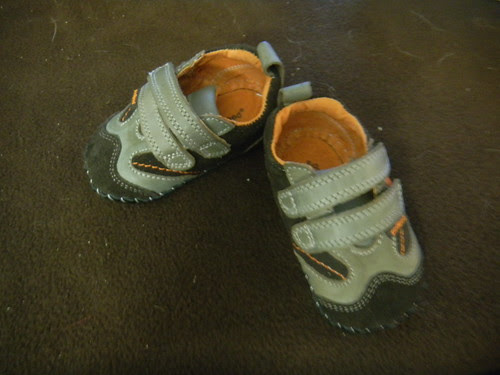 By the way, I don't think I've written about shoes on Mommy Mondays, but we adore Pedipeds.  Super cute (he gets complements every time he wears them) and they're soft soled, which is ideal for infants/toddlers up to 18 months!