I remember when I read Julie and Julia, I really connected with Julie Powell. The cooking, the love of Buffy the Vampire Slayer. And then I hit a scene in which I completely lost contact. That scene was when Julie had to cook a lobster. The insanity in the kitchen just had me rolling my eyes. I grew up on lobster and crab and it just never seemed like a big deal to me to toss the animal into a pot. We used to have races with the lobsters, then turn them over until they passed out, and then into the pot they went for dinner. So I wasn't really impressed with the difficulty Julie was having.

And then came the night I made broiled lobster.

So as I mentioned in my previous post, we tend to boil crustaceans in my house. When I decided to broil the lobster I turned to my Trusty Fannie Farmer. Book in hand, complete with pictures on how to kill the LIVE LOBSTER WITH A KNIFE. I really wanted to do this myself, because I definitely think the disassociation we have with live animals and the cleaned, skinned, and deboned stuff you pick up in the supermarket isn't exactly healthy. So if I'm going to eat this lobster, I should be prepared to take on the gruesome chore myself.

Except, I got very squeamish. Obviously, I wanted to do this the right way, quick and as painless as possible for the animal. So I studied the illustration, I had Thatboy study the illustration. I tried freezing the lobster for a bit so he wouldn't be as cognizant. I tried holding him upside down which usually works to make them unconscious. This guy wasn't going down. He was moving, and squirming, and his mouth was going a mile a minute. With Thatboy standing over me, I inserted the knife at the base of the head, between the eyes, and pressed down quickly.

And started screaming. And Thatboy was yelling at me to use more weight on the knife and eventually he just took over as I huddled myself in the corner shaking and sobbing.

According to all research, this is the quickest and most humane way to kill the lobster - but they don't tell you that the lobster is going to keep moving...legs, claws, tail - as I began slicing him in half, which had me in even more hysterics until Thatboy took over this part too. I decided never again. We're back to boiling and steaming. Thatboy is considering becoming a vegetarian. Although I don't think that resolution will take. Mostly because lobster is delicious. 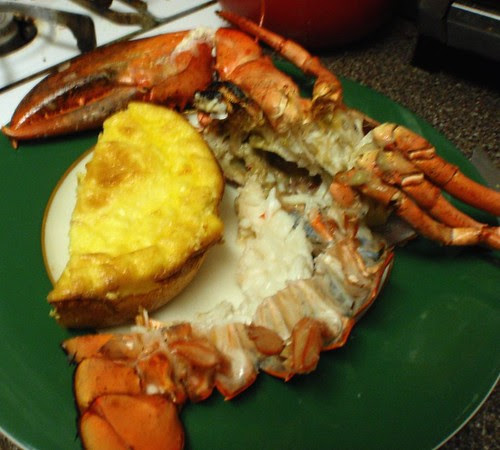 1. Kill and split a live lobster. Instructions on how (and why not) to do this are above.

3. Drizzle melted butter over the lobster halves and broil, meat side up for 15 minutes. 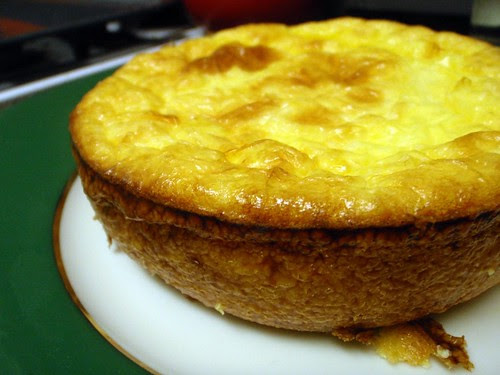 2. Add cornmeal and salt in a steady stream and cook, stirring, 1 minute.