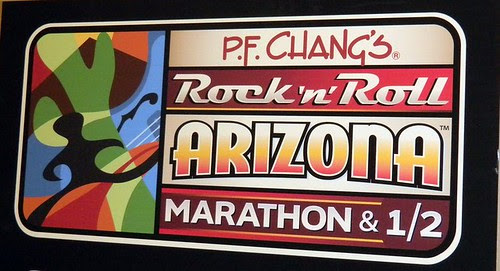 There was always one problem I had with the “where do babies come from” speech I received. It seemed like it would be AWFULLY painful to push something the size of a watermelon out of a much smaller opening. And Hollywood certainly didn’t make it seem like a piece of cake as sweet and kind women turned into horrible beast monsters during labor in every media portrayal. My parents didn’t help much either.

“When your mother was in labor with you,” my dad would relate, “she cursed me, told me I did this to her, she hated me, and decided half way through they should push you back up, she didn’t want to do this anymore.”

“I understand doing it once,” I told my parents. “When you don’t know any better, but why would you have a second child, knowing how much pain is involved?”

My father, the expert on women, confided, “the thing about women is, once the labor is over, and they have that little baby on their chest, they completely forget about ALL the pain. I think it only took 30 minutes of holding you before your mother told me she wanted another.”

I was skeptical. I remember pain. I can show you the exact location of every currently invisible bee sting and oil burn I have ever had. And then I started running these half marathons. On mile 11 of the AFC half I had pretty much determined I was never running this long again. That was the point at which I was walking up the world’s second tallest mountain. About an hour after we got home from the race, I was already looking up when my next half would be. It’s true. Women have selective memories and oftentimes the accomplishment far outweighs the memory of the pain.

For my next half marathon I had chosen the Rock ‘n’ Roll Arizona for several reasons. 1) The course was almost completely flat. No extreme craziness at mile 11. 2) Rock ‘n’ Roll Marathons are supposed to be fun, with music all along the course. 3) Toxicesq and China live in Arizona and I thought it would be great to do a half marathon where I could also get a visit in with them. So I signed up, and started training just as soon as I got the all clear from my physical therapist. Friday after work Thatboy and I headed to the airport.

Saturday we headed to the Expo a block from our hotel to pick up my bib and swag. 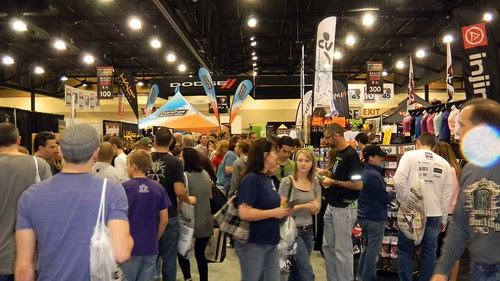 This was a giant expo, and I wish we would have had more time to explore. Thatboy thought it was the most fun expo ever because there were carnival games to play. I usually discourage him from playing carnival games because no one ever wins and he would easily spend a downpayment on a house attempting to prove me wrong. But here they were free and I let him have at it. The expo was also extremely well organized. One of the best I’ve attended. I thought it was going to be madness with the sheer number of people present, but I was able to pick up my bib, shirt, and bag faster than almost anywhere else.

Saturday night, I laid out everything. It’s difficult to travel for a race because there’s always that fear you’ll forget something you need. I did okay on this one, the only thing I wish I’d packed was some throw-away gloves and sunscreen. My little fingers were cold Sunday morning, and I definitely got a little bit of color. Not as bad as I was expecting, but I’ve got a nice rosy glow to my face. I probably wouldn’t have minded a hat either, and my next expo-purchase will certainly be a pair of sunglasses. 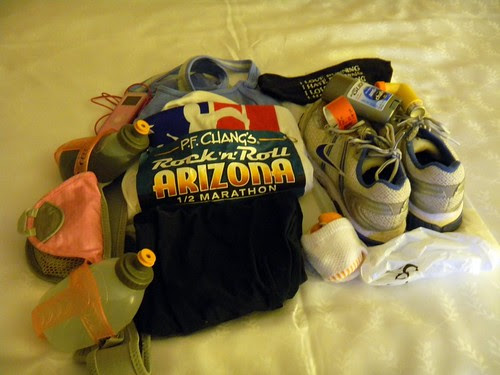 Sunday morning I got up, and because my race didn’t start till 8:30 and I was 20 minutes from the start, I actually got to sleep later than I usually do on raceday. All the way till 6:00! It didn’t hurt that I didn’t have to walk the dog. Because the race start was 1.5 miles from the hotel, I opted to take the shuttle from the hotel while Thatboy and Thatmom walked. When I arrived, it was dark and crowded. But the crowd was buzzing with energy. Perhaps they drew it from the band. 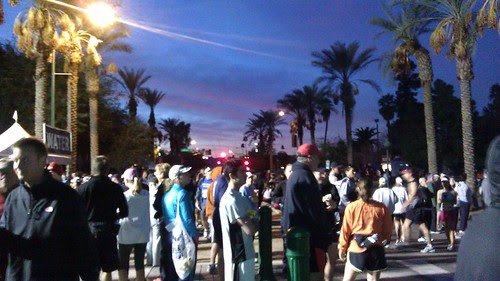 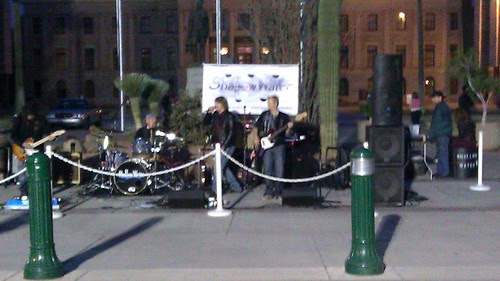 These guys definitely had a sweet gig. As we were all hanging about, waiting for portapotties, warming up, drinking water, we listened. They got much more constant attention than then bands scattered throughout the course. 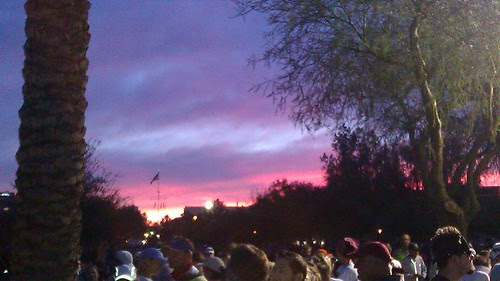 Before too long, it was line up time. I found Thatboy and Thatmom and hung out with them until it was just about race time. Then I headed over to find the pace group I was going to run with. 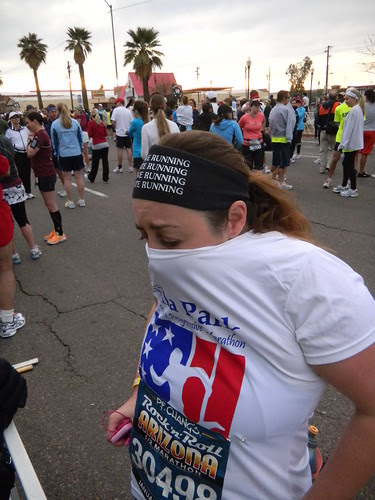 (This is me demonstrating how everyone was leaving the portapotties before the race. I hate portapotties. This will play a big p 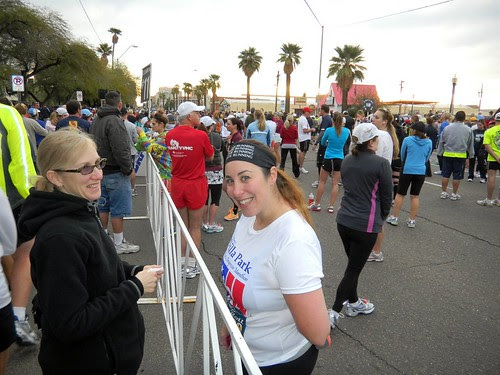 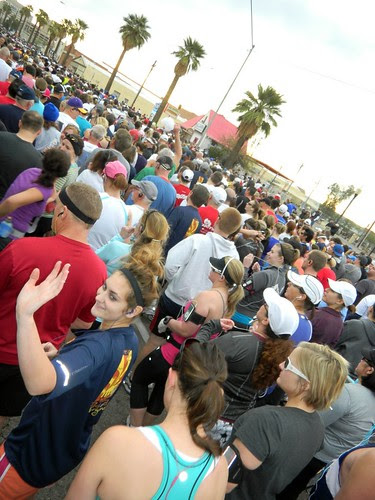 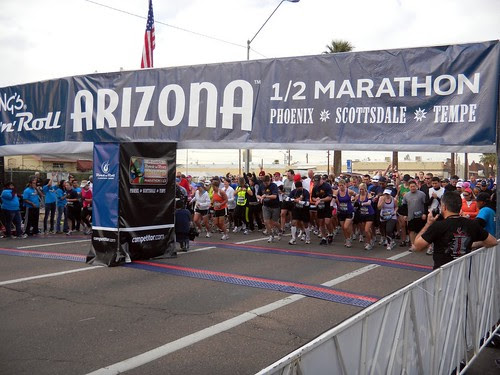 I was still shooting for the 2:10 I hadn’t been able to make on my first half, but thought I stood a chance here since it was flatter terrain. I decided to run with the 2:15 pace group, figuring I could always push it the last couple miles if I started out slower. The pacer for the group had a little card on her sign which broke down our expected pace for the miles. Mile 1 – 10:18, Mile 2: 20:36, Mile 3: 30:54, etc. etc. etc. It was PERFECT because it was pretty much the exact pace I run! When we started running I felt like we were going a little fast, but thought nothing of it until we hit the first mile at, ready? 9:08. 9:08?!!! That’s over a full minute faster than we were supposed to be and definitely the fastest mile I’ve ever ran. No wonder I was getting tired. “It’s okay,” I thought. They’ll probably slow down a bit now. Nope. Pacer went for a bathroom break, passing the pace sign to someone else to carry on with. That person TOOK OFF. MAD SPRINT. By the time I hit the 2 mile mark at 18:20 that girl was no where to be seen. Does anyone else think this is odd? At mile 2 I was over 2 minutes under our expected time and the pacer was nowhere to be seen.

At that point I was now tired and cranky and decided that this pace group thing was not what it was cracked up to be. I figured I could probably keep a 2:15 mile pace on my own, and so that’s what I strove to do. During the next 4 miles I slowed down my pace to be a little more comfortable to me, but I have to tell you the truth, I was definitely burned out and tired. I was hitting all the right times, but just felt bleh about it. It didn’t help that this was probably the LEAST scenic course I had ever run on. Flat? Yeppers. But only because you were running down the middle of a street with nothing to see. Music? Eehhhhhhhh. I was glad I brought my i-pod because the bands were really spread out and you only heard them for a tiny blip as your ran by.

And then came mile 5-point-something-or-other. When it became quite clear that I had to use the restroom. RIGHT NOW. Now, I drink a lot of water to stay hydrated, but I have never had to use the restroom during the race, mostly because I’m using it while I run. I resigned myself to the fact I was going to have to stop and use the next porta-potty I saw and that 2:10 was never going to happen. I crossed the 10k mark and veered over to the line at the 2 porta potties stationed there. Later, Thatboy, who was getting texts about my times at different landmarks, mentioned to me that he was really impressed with my times up till 6.2 miles, and then it seemed like I really slowed down. I didn’t really slow down – it was that porta potty stop which took 7 minutes! I think this was mostly due to the fact that the porta potties were out of toilet paper, so people were in there an extra second or two “drying off.” (I know I was.) 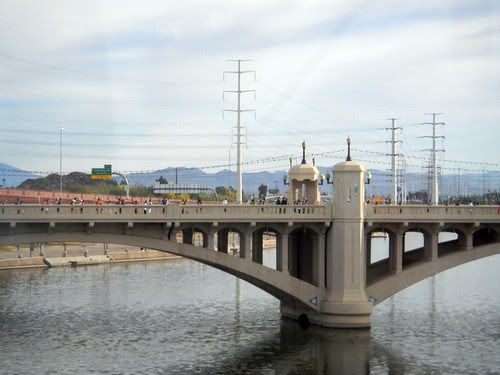 I honestly didn’t enjoy the rest of the course as much as I enjoyed the AFC half. And I again reached the point where I wondered why I was doing this. My usually docile stomach had been acting up during the whole race and I was gulping down water at every water stop. And then I crossed the finish line. 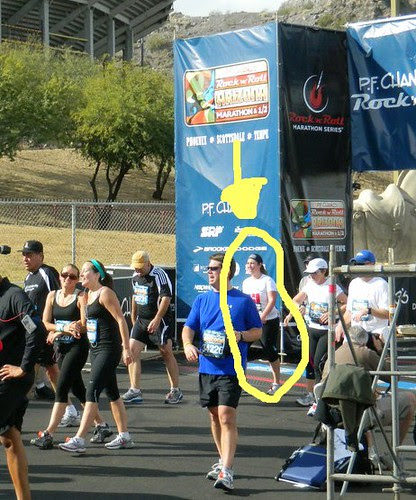 And within minutes, I felt completely fine. Not tired, not sore, and while I wasn’t ready to do another 13.1 at that moment, I was certainly ready to tackle it again in a couple weeks. That selective memory thing is a pretty good trick! 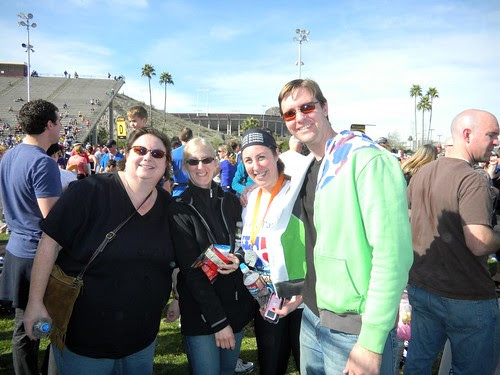 The Headliner for the Finish Line Festival was Vertical Horizon, and I’ve already told y’all about my love for Vertical Horizon. As usual, they put on a great live show. But because this wasn’t the typical venue, I was able to get right up close and personal. LOVE that. And maybe that’s one of the reasons I was so quick to forget about the unfunness that was the course. 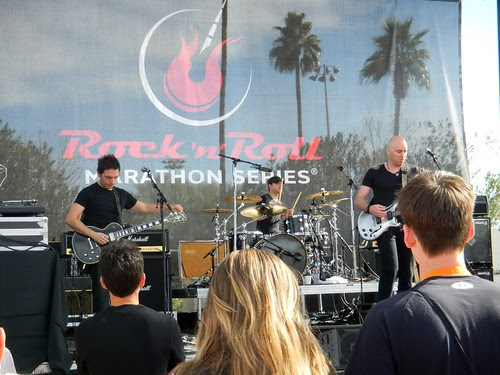 The beer didn't hurt either. 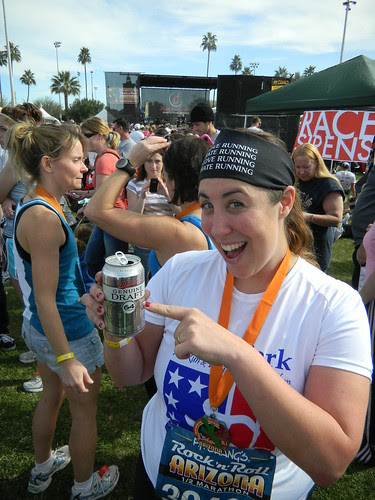 Of course, I remember it enough to know that this probably won’t be a permanent addition onto my race schedule.

And on a completely unrelated note, if you, like me, had some extra patty shells left over from your creamed lobster, you can easily fill them with loads of other treats. Like Shrimp Newburg! Doesn't crustacean just BEG to be served in patty shells? 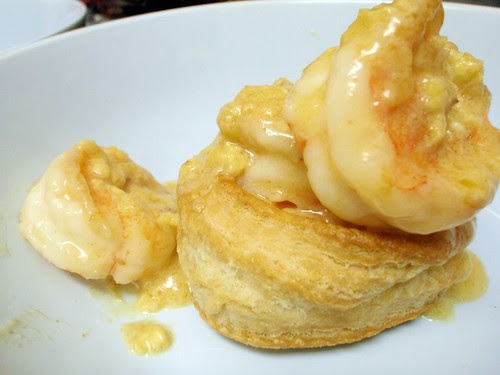 1. Melt 1 Tbsp butter in a skillet. Add shrimp and cook for 3 minutes over low heat. Stir in the lemon juice and set the pan aside.

2. Melt the remaining Tbsp of butter, add the flour, and cook 1 minute, stirring.

3. Slowly add the cream and cook, stirring until the sauce is slightly thickened.

4. Beat a spoonful of the sauce into the egg yolk. Return the egg-sauce mixture to the sauce and add sherry and brandy.

5. Add the shrimp and cook over low heat until shrimp are warmed through.