Resolutions, you got them? Sure you do. Everyone does. Even those who claim to be above the whole "new year, new you" philosophy has a secret wish. But sharing is caring. And it helps with accountability.
One of my Resolutions was to be a better blog-friend. Because the blogging community was there for me during one of my darkest periods in ways my real life "friends" weren't there. So I vowed that this year I'm going to be a better commenter and joiner-inner. That means taking part in more blogging events/challenges.

It didn't take long for this resolution to be tested. This morning as I was going through my favorite blogs, and noticed that Joanne had posted a new challenge for the new year. Eat.Live.Be for a better 2011. A group of bloggers who are going to eat and blog for a healthier 2011. Mondays will bring posts about different themes and detail progress in our personal goals over that week. This week's theme is to share our goals.

It's funny, but all my goals are related to "things I learned from running in 2010." My overall goal is to feel better and run faster and safer. But I'll break that down into three parts.

Goal 1 - Drink More. I've always been good at drinking water. It's pretty much my exclusive beverage. But in 2010 I realized that although I'm fantastic at drinking during the week, for some reason it all falls to the wayside on the weekends and I become as dehydrated as the Sahara. I'm really making an effort to make sure I stay hydrated week round. I got two new tools to help with this: 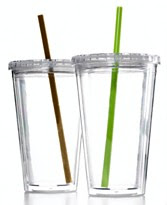 For the weekdays. Because this is SO much chicer than the giant plastic fair cup I normally use to keep a full glass of water at my desk.

Goal 2 - Drink Less. I was probably in the best shape ever right before my wedding. (Weren't we all?) And I do have to say, that one of the key differences between then and now is the amount of alcohol consumed. I actually gave up all alcohol for the entire year before I was married. In 2010 I realized that if I drank nights before I ran then my morning run was AWFUL. So I stopped drinking if I was running the next day. Now, I don't know that I can cut out alcohol entirely, but I would like to cut down my drinking to maybe one night a week instead of "every night I'm not running."

Goal 3 - Add weight training back into my weekly routine. 2010 was the year of injuries. To be fair, it probably really started with the herniated disk in April 2009, but we're going to call it 2010 to make this blog post really work for me. I love running, but a girl can not live on trails alone. I want to be stronger, I want to run without fear of hurting my back or SI joints. I know that to do that I really need to work on my strength - back, core, legs, etc. And it doesn't hurt that one of the bloggers I most admire, Cara is constantly touting the benefits of lifting. Thatboy and I used to go to the gym every night together, but when I messed up my SI joints, I was instructed to stop going to the gym, and I never really got back into it. So I'm going to try really hard to make my body stronger and healthier. (And I'll admit I already failed tonight when I chose to take a phone call from a friend and do some girl chatting instead of heading out with Thatboy to the gym. Well, there's always later this week!)

After all those good and healthy resolutions, I was really debating about whether I should share this next recipe with you. I mean, Sloppy Joes aren't usually considered "health food." In fact, growing up, in a fairly healthy conscious family, we only had sloppy joes when my mom was out of town. It was one of my dad's specialties, a throwback from when he was a kid.

So why did I decide to share this recipe? Well mostly because you know I already believe in not giving up foods completely, so if you're DYING for a sloppy joe, you should have one. BUT don't reach for that Manwich can just yet, if you're going to have a sloppy joe, there's no reason you can't make it yourself. Because pretty much anything you make from scratch is going to be better for you than something from a can. 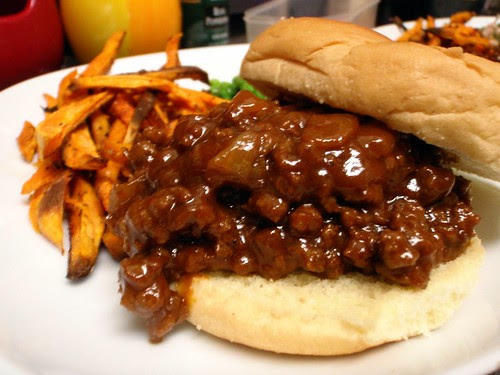 1. Heat oil in saucepan over medium heat. Saute onions until tender.
2. Add turkey to pan and brown. Drain any excess oil/fat from pan.
3. Stir in BBQ sauce, mustard, and worcestershire sauce. Simmer 5 minutes and spoon onto rolls.
Posted by That Girl at 8:24 PM