San Diego has a a ton of races, but very few locations for races.  There are usually the same four or five routes that host all of the races shorter than a half marathon.

Years ago, there was a Valentine's Day race at Kit Carson Park, and while the course was a little challenging, I really liked it.  I liked it enough that for a while I would run the course while Thatboy and Thatkid biked and skateboarded at the park.  But that race ended in 2016 and there hasn't been one in the park since.

Sometime over the summer I noticed that there was going to be a new race at Kit Carson Park - Ghouls on the Run.  I was immediately interested because of the course, but the fact that it was a Halloween race didn't hurt either.  And they had a discount for kids.  Thatkid was IN.  He couldn't wait to run the race, asking if I would dress up like a zombie with him. 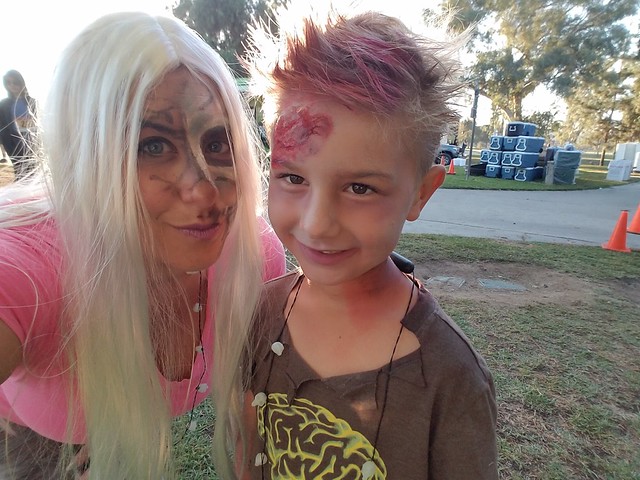 Of course, just a few short weeks before the race was the ankle injury.  So there was no way I was running it.  But I figured that between his run spurts and frequent walk breaks, Thatkid usually ran a 14 minute mile, and I could handle just about that with constant hobble/running.  We also planned to meet up at the bottom of the big hill, and go up together if he did get too far ahead of me.

When we got to the race, he ran into an older friend from school.  They said hi, and as we lined up at the start, we found ourselves beside him and his mom. 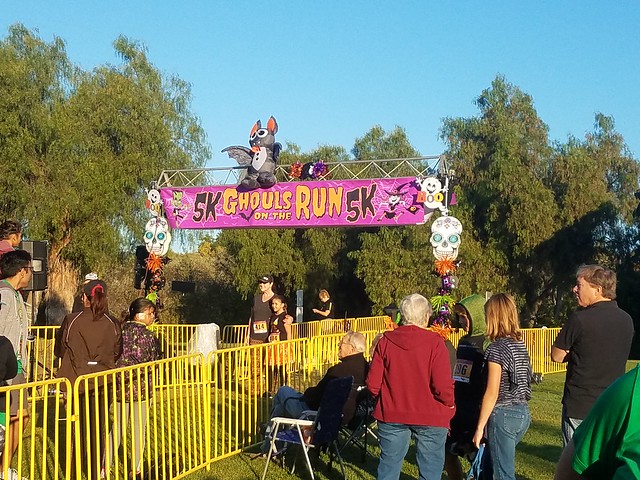 I jokingly told Thatkid that if he wanted to run with his friend he could, and I wouldn't slow him down.  That joke turned into reality when his friend's mom jumped right on it and said she'd run with the boys.  When the race started, they took off.  Knowing how Thatkid run/walks, I figured I'd catch up with them somewhere along the way, so I just took the race easy.

This race was actually the reverse of the Sweetheart Course, starting us off in the dusty, hilly part of the trail.  It was a great switch, because I always find my momentum better early on.

The entire course was decorated to fit into the Halloween theme. 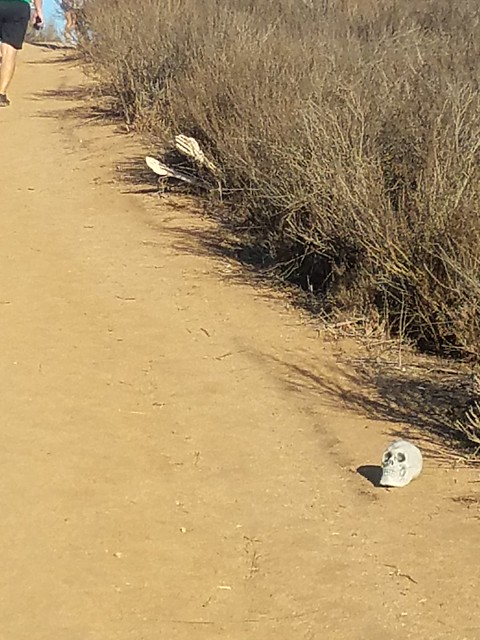 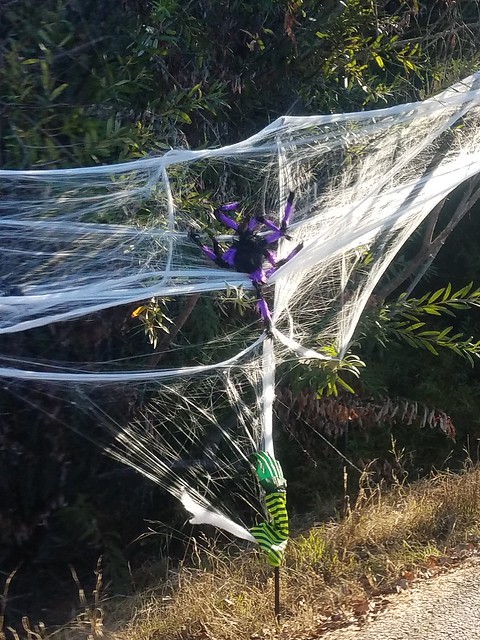 The race organizers are trying to get the big hill on the course known as "Gummy Bear Hill" by having gummy bears for all the racers at the top.  Talk about a trick or treat! 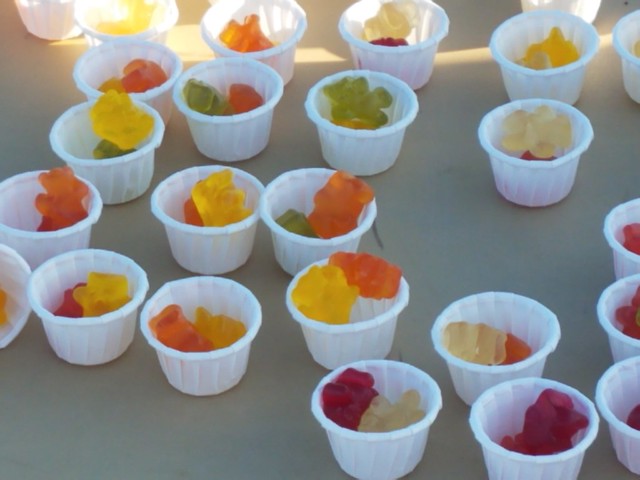 And while I was planning on meeting Thatkid at the bottom of the hill, I was unsurprised to see him far enough ahead of me on the course, running with his friend.  The other mom told me it was adorable to tag along and listen to their conversations.  I was surprised to find that Thatkid didn't stop or walk once on the course.  The other mom was surprised too.  Her son usually runs similarly.  I guess having a friend to push you along works pretty well.

After the hill, we headed in to my favorite part of the trail - the tree-lined part! 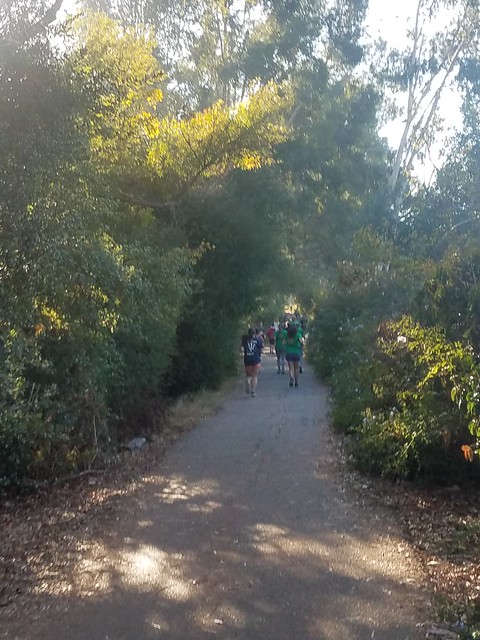 Thatkid and his buddy finished enough before me that they came to see me finish. 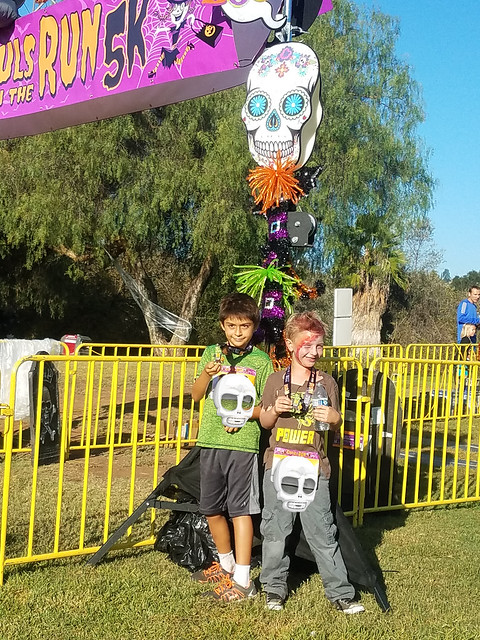 I didn't take any pictures of the post-race festivities, but there were little cakes, fruits, and bagels as breakfast for everyone.  We didn't stay long because Thatbaby had an art class, and Thatkid had a soccer game, so we snapped a quick medal picture and we were off. 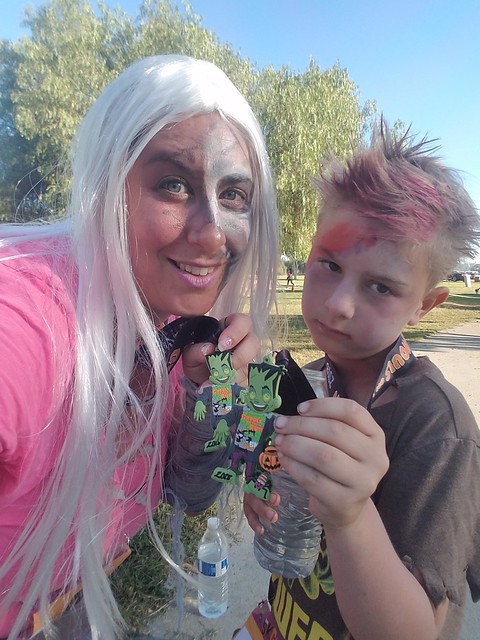 What I didn't realize or expect is that my super speedy son was so super speedy that he placed 3rd in his age division!  So once the results came out, I ran over to the race offices and picked up his award while he was in school. 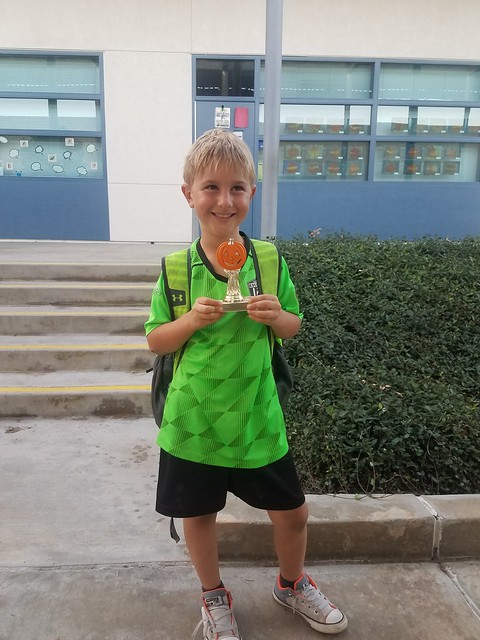 It was a great course, and a really fun race.  I can't wait to do it next year on 2 good ankles!