For the past five years I've read about Wan's adventures running the Orange County Fair 5k.   The entire thing sounds like so much fun, with detours during the run to take part in fair activities like rides, games, and photo opportunities.

A couple years back I noticed that the San Diego fair was going to be starting a 5k of their own.  But for some reason or other I was never able to run it (silly things like giving birth the week before the race).

This year there was nothing keeping me from running.  It was my year to join in the fun.  When I saw that kids 5 and under could run for free, I asked Thatkid if he wanted to run with me.  He did!

So yesterday morning when he woke up at dawn, I roused myself.  We got dressed and headed over to the fairground.  We picked up my bib and race shirt (Thatkid got to run the race, but didn't get any of the perks.)

We skipped into the empty fair grounds and made our way over to the area they had us all corralled into.  A  fitting term since we started on the horse track!  There were all sorts of tractors and farm equipment.  After seeing other kids climbing all over them, and signs saying "photo opportunity" Thatkid asked if he could sit on a tractor too and I said yes.  Right as I snapped this, security came over and said no one was allowed on the equipment.  Whoops. 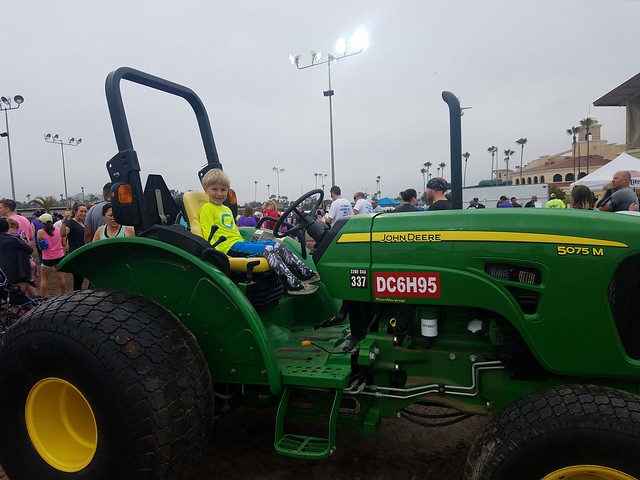 Instead we went and took part in the warm up.  Especially when Can't Stop the Feeling started playing and Thatkid broke out in a huge smile since it's his favorite song.

We did eventually line up to get the race started.  They let us go in waves of 300, and we were in the first wave! 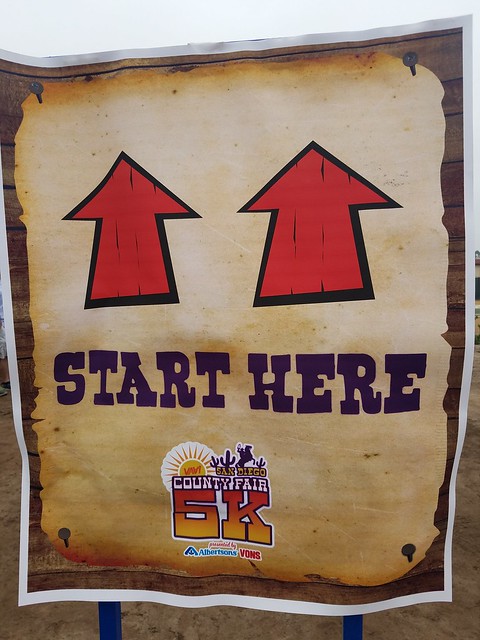 Thatkid and I had a talk on the way into the race about pace.  It's not his strong skill.  And a 5k is still a really long race for him.  The last one we did he spent almost the entire time complaining that his legs hurt and asking to be carried.

But this time?  This time he NAILED it.  He kept his pace nice and comfortable, instead of taking off like a rocket the way he often does. 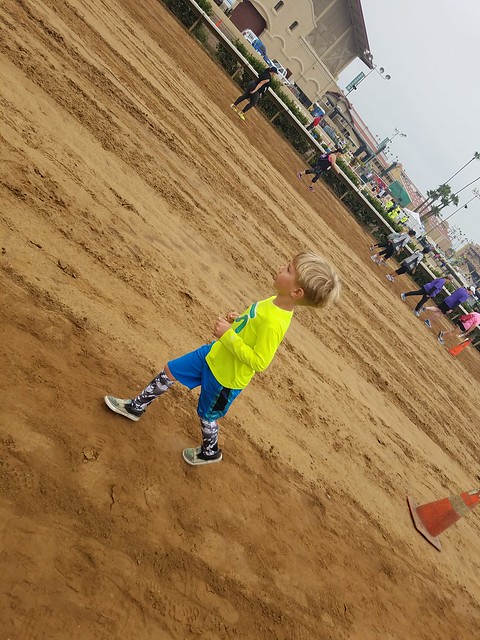 We ran through the area the area that was set up for the International Beer Festival.  But since it was 7:30 am, it wasn't open yet.  Thatkid did mention that he thought his dad would REALLY like this place. 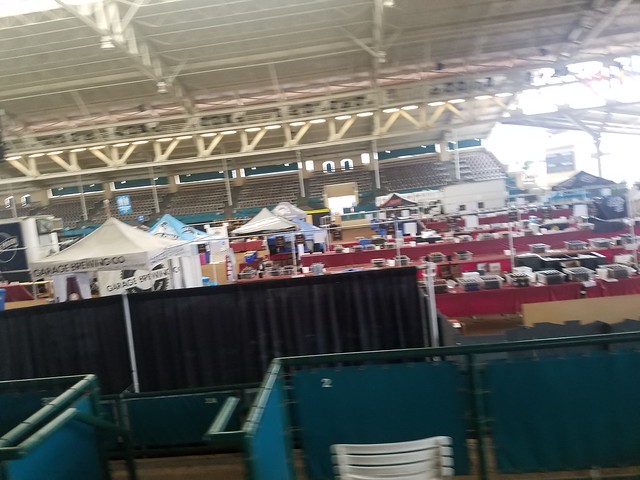 Apparently before the fair is when the cows take their morning showers.  And we ran right past them as they bathed.  The last part of the race had us run through the area where the cows and goats are kept, so these heifers started and ended the race for us. 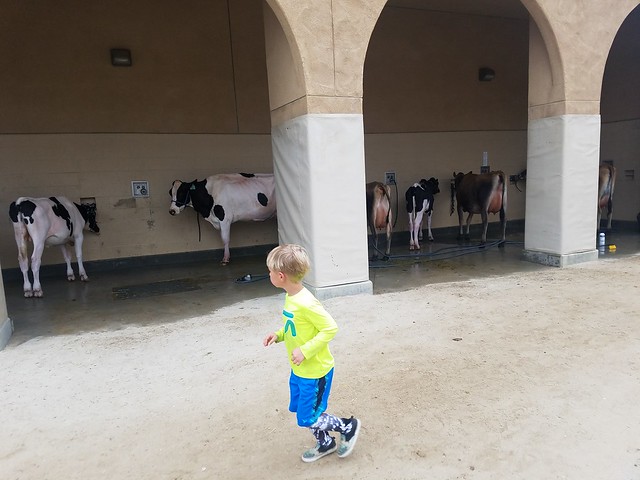 We ran down the row where all the food vendors were, their shops shuttered, but still featuring their wares and we looked at some of their more interesting offers while Thatkid spent some time thinking about what he wanted his "fair treat" to be this year. 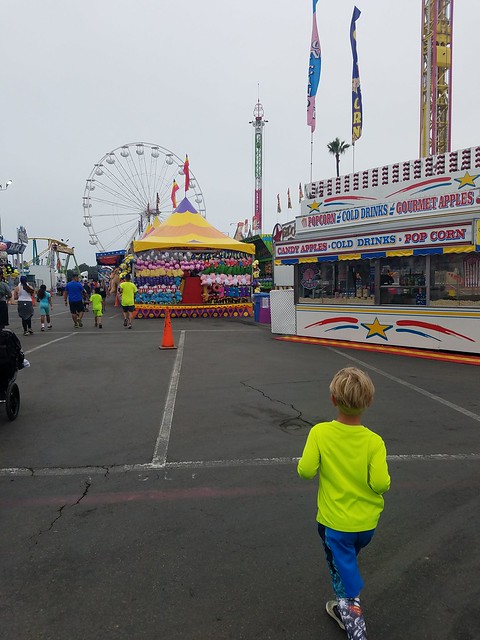 And then we were in the games and rides areas.  Thatkid slowed here, so he could look at every game and ask how it worked.  And admire the stuffed animal prizes.

When we got through all the games and rides, we found ourselves back on the horse track, with less than a mile to go! 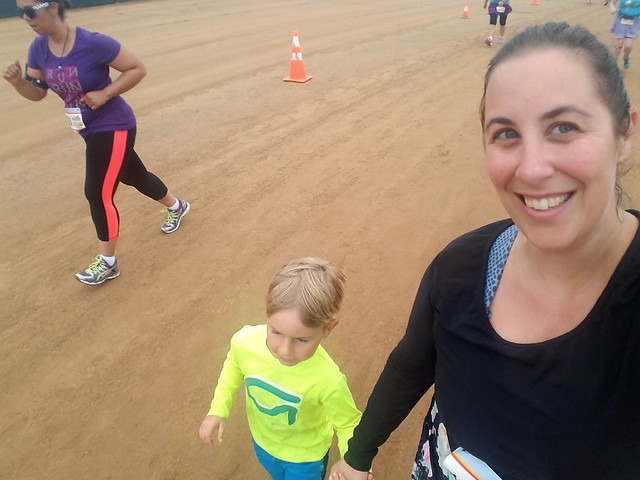 This is where Thatkid started getting tired.  We did quite a bit of walking here.  And had a stop at the water station.  And he got a couple of Jelly Belly Sport Beans I had brought with me, just for this occasion. BUT there wasn't a word of complaint! Which is just fine by me!

We crossed through the cows and goats and saw the finish line.  Which was odd, because I just finished showing Thatkid we were at 2.90 miles.  But when you're running with a tired kid, I see no need in quibbling about a race that was a couple meters short. 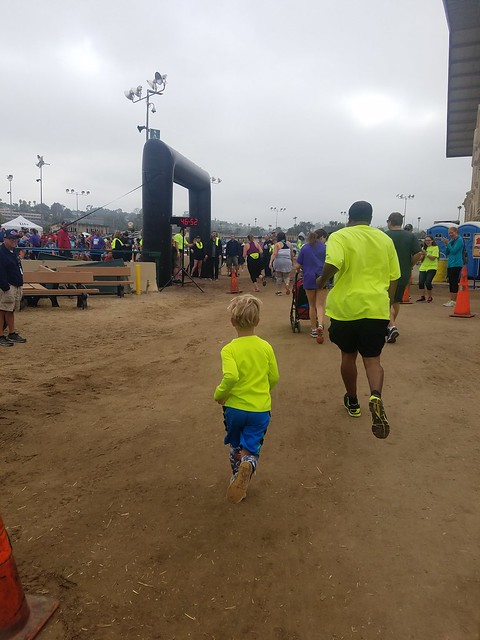 True to form, Thatkid had saved a little bit of energy for this moment, and he took off toward the finish.  Weaving around, through, and under anyone between him and the finish line. 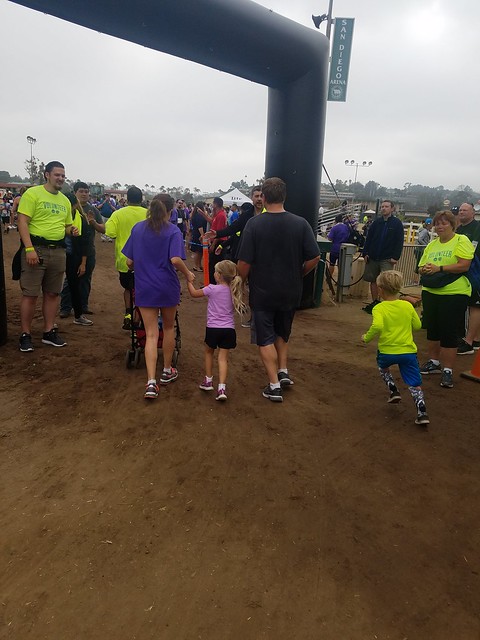 My overall feeling about this race was positive.  There's a lot to look at on the course and it's always fun to be in a place where the general public isn't.  The miles came really quickly.  But I do think that the race misses the mark a bit.

One of the great things about the Disney races and Zoo races (when they did them), and Sea World races, is the photo opportunities.  And there were  really none during the race, other than the physical race itself.  With the theme this year being "Where the West was Fun" it would have been neat to have some cowboys along the course to take pictures with.  Or cutouts to stick your face in.  Or any other number of opportunities.  Even the Cardiff Kook race this year had a backdrop on the course.

I also was a little disappointed that the San Diego race doesn't have the "Fun detours" that the Orange County race does.  This was a super family friendly event, and I know that families would have really loved to take part in more of the "fair" atmosphere during the race.  Plus, the Orange County race has medals.  Which to me aren't terribly important, but I know Thatkid was disappointed in having nothing from the race - no shirt, no medal.  He was pretty easily cheered up with a pitstop on the way home for smoothies.

Despite the drawbacks, it was a really enjoyable morning.  And both Thatkid and I could see ourselves running this one again!
Posted by That Girl at 1:00 AM