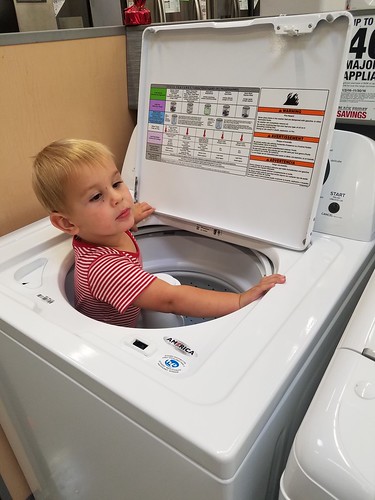 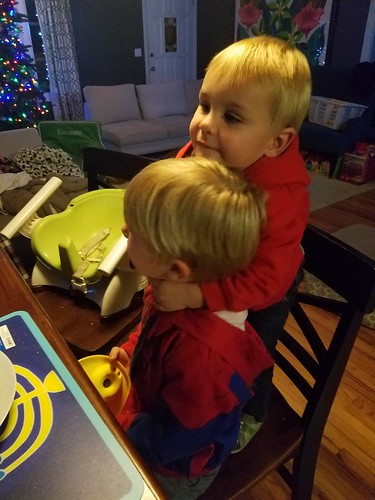 Sleep:  It's the same.  Over Thanksgiving was the worst, he was up for hours each night, or up 6 times.  Of course, other nights he doesn't wake up at all.  He still wakes early, although he appears to have dropped his morning nap, so we're down to just one nap a day.  I wish I could say that led to better night's sleep, but well, it just hasn't.

Eating: I figured out our apple issue.  Apparently he doesn't like apple peel.  So I peel the apples and then he eats them.  His eating has been up this month, or maybe he just likes what I'm serving better?  I don't know.  Still a huge fan of grapes.  I keep a big bowl in the fridge and both boys love to help themselves.

Best Moment: I was trying to entertain Thatbaby at a restaurant so I started making "Toddlers and Tiaras" faces at him, the faces the little girls on the show make - duck lips, head nods, tracing hearts around their faces.  And he picked it up really quickly.  But that's not the best moment.  The best moments are the times when he spontaneously starts doing them to entertain us.  Whether it's a quiet moment at the dinner table, or a time when I seem sad.  I've always said that Thatkid is the jokester, and Thatbaby loves to laugh, but Thatbaby is definitely developing a sense of joking himself. 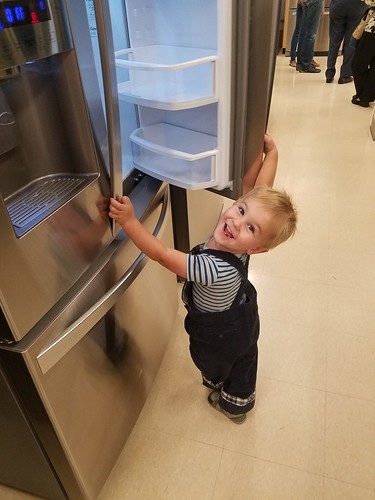 Monthly Wisdom: The above picture convinced me that we cannot have a french door refrigerator.  It is hard enough keeping him out of the cabinets, pantries, toilets, bathrooms, and recycling, our saving grace is that he can't open up the refrigerator.

Goals for the Upcoming Month:
-  Sleep more!
- Another car trip.  I feel like this is going to be a much harder age for it.

Things Thatbaby is doing:
-  More new words!  He's started repeating things we say also.  Some of his big phrases right now are "Buh bye, gotta go,"  "Mo mobo" (more motorboat) and "eat dat."  And while he still doesn't seem to have his brother's name down, he's pretty close with Thatdog.

-  Cooking.  He's my little helper in the kitchen.  He will even drag a chair in there if he thinks I'm making something without him.  He likes to dump and pour things into bowl, and he love stirring even though he's a terrible stirrer.
- Another tooth broke through.  Which I think brings our total to 11.
- We are definitely in the "NO!" stage for just about everything.
- He knows body parts like eyes, ears, and mouth.
- He loves the song "Open Close them" and wants me to sing it all the time.
- While in home depot one day I spun the cart around singing the motorboat motorboat song.  He loves it.  He asks for it all the time.  And it doesn't have to be in a cart, he's happy if I swing his arm while singing it.
- He is big on cleaning up.  He will throw things in the garbage, wipe down the floor or any spills, and lately he even likes washing dishes (which really consists of squeezing the sponge over and over)
- He has started drinking from a regular cup.  I only put a little bit in the cup, but it makes him very happy to drink like a big boy.  And he is so careful about putting it down on the table when he's done drinking. 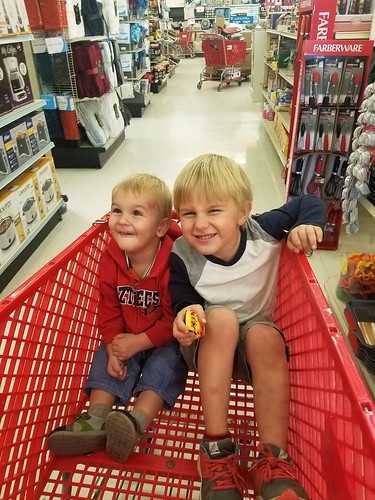