I am firmly ensconced in the second trimester now.  I'm halfway through with the pregnancy!  Which means right now I'm feeling pretty good.  Except for the constant nosebleeds (another fun new symptom this pregnancy), and my sciatica is driving me nuts.  My running is even a smidge faster than it was first trimester!

I've been photodocumenting this pregnancy, just as I did the last, but really no one wants to see weekly pictures but me.  But I'm officially showing right now as those who know me will agree, so it's probably time to share a snapshot of where we are now, at 20 weeks.  I've been taking pictures wit the corresponding size produce, this week the baby's the size of an artichoke! 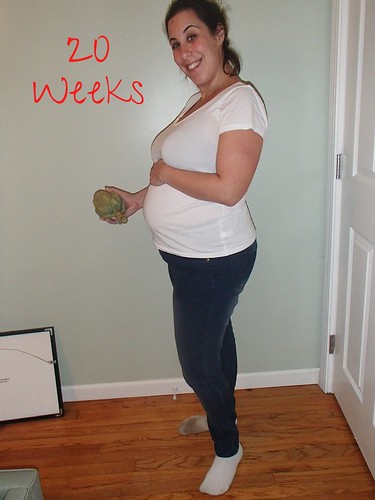 As I was telling Horsewhisper yesterday, I don't have that pregnant woman glow.  I have that tired mama look.

Total weight gain/loss: +10
Next Appointment: February 2
Maternity clothes? I switched over this week with tops.  Still mostly wearing regular pants with the bella band.  Which is good, because I realized yesterday that I can't find my maternity jeans!  My super expensive big splurge from my first pregnancy maternity jeans.  I'm devastated.
Stretch marks: nada.
Sleep: Not enough!  But mostly because I've been staying up later.
Best moment this week: Ridiculous kicking.  All the time.  They make my night.
Movement: See above!  I can even kind of feel it from the outside!
Food cravings: Nothing
Food aversions: Not really.
Gender: Not finding out
Belly Button in or out: In.  But it never popped last time, so I'm not expecting it to this time.
What I miss: Singing in the shower without getting breathless.
What I am looking forward to: Nothing big this week, it's going to be a mellow one baby-wise.  Big one work wise which isn't so fun.
Contractions: Nope.  Last time around I didn't get them until they were induced through medication.  Part of me is kind of hoping to actually have those moments this time.
Milestones:
- Halfway there!
- Baby is starting to lay down fat reserves.
Posted by That Girl at 1:00 AM