I know, this post is very overdue.  But it's been a little bit busy over here at Thathouse.  We've been officially moved in for 2 weeks, but with all these races and weekend events, blogging has taken a bit of a backseat to "searching through boxes for things we need."

So it's now been 2 weeks since I ran the Rock and Roll Half. And I'm not kidding, after all these races the past 2 months, I've been taking it easy on the running front too! The past 2 weeks have been light and easy runs, some of the shortest I've run all year.  Which has been nice.  But back to the race.

The expos for the Rock and Roll races are always a little overwhelming to me. Every vendor you can imagine has a booth there.  So I knew it would be a good place to grab some more Sport Beans.  But I picked up some other stuff too. 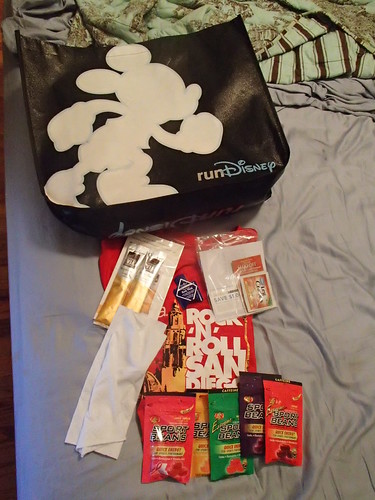 Super excited about my new Run Disney bag.  I was also pretty excited about the Columbia arm "coolers" but they ended up working like any other sleeve, meaning they were great for the early morning because they kept my arms warm, not cool.  I rolled them down when the sun came out.


The race started hours before dawn.  That's an exaggeration.  It actually started at a reasonable 6:45, but I had to be parked by 5 and on the shuttle by 5:30.  Which meant I was up at 4:15 that morning getting dressed and packing the boys into the car to head downtown to the race.

It was right before we crossed the new footbridge (I guess new is a relative term, but it was my first time across!) that Thatboy realized he left his phone at home. 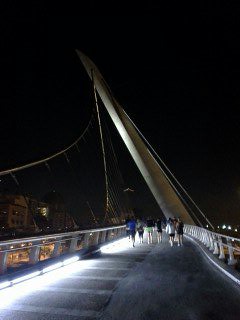 In a flash of brilliance, knowing I was meeting up with L&O and possibly Jurisslave I texted them to let them know I'd be phoneless and I'd meet them at our corral, and passed my phone over to Thatboy so I could meet up with him after the race.  Which means I'm pretty photoless for this run.

L&O met me at the corral and we spent some time hanging out there, waiting for the race to start.  The race started at Balboa Park, with almost all of 6th being dedicated to the various corrals.  We watched the marathoners take off, and not too long after the half marathon started.

The first 3 miles were pretty uneventful.  We ran through Hillcrest, it was mercifully flat, and the sun was behind some clouds.  Around mile 4 the hills started.  Nothing too big, or too steep, but if you run, I'm sure you've grown to hate those people who tell you you're almost done when you have miles to go.  (As an aside, some cutie patootie kiddo yelled that to us at 2.5 miles.  All the runners roared in laughter.)  Well, this race had crowd support at every hill telling us it was the last hill of the course.  It never was.  Some even had signs saying it was the highest point of the course.  It wasn't.

But I really can't say anything too negative about the crowd.  They were unbelievably sweet.  Almost every neighborhood had people in front of their houses with treats for the runners.  There were people with spray bottles, pretzels, jolly ranchers, Swedish fish, and some less conventional treats like beer, margaritas, iced coffee, tequila shots, and bloody marys.  One neighborhood even had their own water station for the runners.

Around mile 7, the sun came out.  And we felt it.  Oh how we felt it.  It got really really hot.  The course is fine, but it isn't very shady.  It's mostly running down unsheltered streets.  I think our pace took a hit around then, and the hills became more of a pain than they were.

Really, the race was kind of a blur for me.  Maybe because it was 2 weeks ago, but also because I felt fine during it.  I was really concerned about the race, because I'd been running so much.  I feared my legs would be really tired.  And the week before, L&O had a miserable run in Palm Desert where we barely completed 9 miles. So feeling okay during the run was surprising to me.

Miles 10-13 were all downhill.  And while I felt fine, L&O started really feeling her legs on the downhills.  So we slowed down.  I know I've said it before, but for me, I like running with people better than getting personal records.  So it was a no brainer that I'd hang out to run with L&O.  I told her that I'd use those miles to conserve energy and really book it my last tenth of a mile.

I couldn't wait though.  As soon as I could see the mile 13 marker, I took off.  Thatboy managed to get a shot of me heading to the finish. 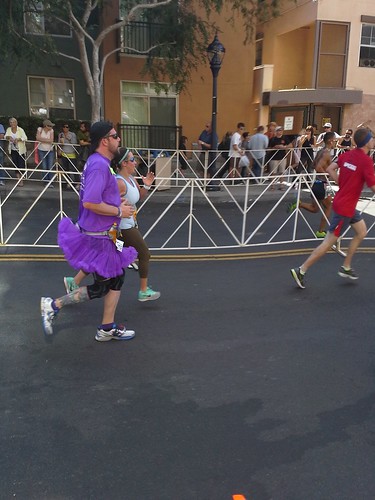 Hindsight is 20/20, but if I'd known where my time was, I probably would have started picking up speed just a smidge early.  I crossed the finish line 20 seconds after my PR!  Which is frustrating.  But at the same time, I've already had 3 PRs this year, so what's one more or less, right? 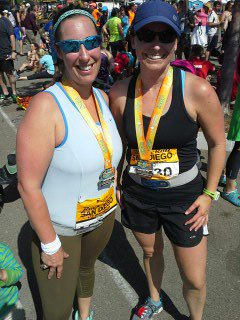 L&O finished mere seconds behind me.  We both look pretty good for how hot it was!  We met up with Thatboy and Thatbaby.  She headed home, and I went to meet up with Jurisslave who had PRd!  (I am so proud of my speedy friends)  Jurisslave remarked that I didn't look like I just ran a half marathon.  I'm telling you, this running so much in a short time apparently really is conditioning.

After hanging out with Jurisslave for a little bit, she headed back to her family and me and the boys headed into Petco Park for the Finish Line Festival. 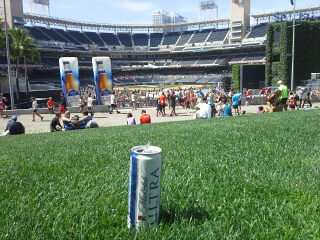 It was very cool to be able to get into the stadium and onto the field.  I settled in to the grass to relax with a beer and watch Aloe Blacc while Thatbaby spent his time rolling down the hill.  Eventually this led to races down the hill, because running a half marathon is no excuse for not being up to toddler runs.

This was my last big run of the year.   I have some more races on the books, but little 5ks and 10ks, so I don't have to worry about fitting in times for long runs.  Which means now I can just run for fun!
Posted by That Girl at 1:00 AM