Shortly after my last wine and painting class I determined that it would make the perfect Mother's Day activity.  We tend to do "experiences" for Mother's Day instead of presents.  So spa days, pedicures, tea.  I knew Thatmom would love the painting aspect, and thought she would have fun with the wine part too.  So I picked up a groupon for Thatmom and I.

The problem was, we ended up moving Mother's Day weekend.  So instead of getting together with Thatmom and celebrating everything she is to me, I was stuck moving boxes, picking up curtains, and cleaning.  The groupon expired May 31, so I needed to sign us up for a June session.  Our timing options were limited, since the weekend classes were mostly on Saturday mornings, when Thatmom was already busy.  When I saw there was a Saturday night class, I signed us both up, even though it was a picture neither of us was terribly interested in.

We headed allllll the way down to Southern San Diego County and were the first people there, so we got front row seats.  Which was nice, because it was the instructor's first time, and he wasn't great at giving directions. 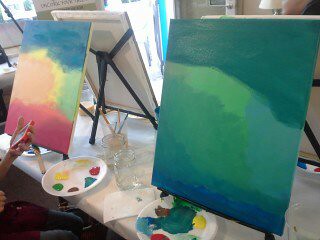 Hoping for art I could hang in our new bedroom, I opted to veer from the sample and go with some blues and greens.  Thatmom (and the rest of the class) went with the recommended colors.

The class was not nearly as fun as the first time I did it, due to a combination of things - the poor instructor, the painting we didn't like, and the fact it was in a coffee shop, so there wasn't anything to drink. Despite all this, Thatmom and I enjoyed ourselves, drinking milkshakes and cracking jokes.

Neither of us was terribly impressed with our finished product. 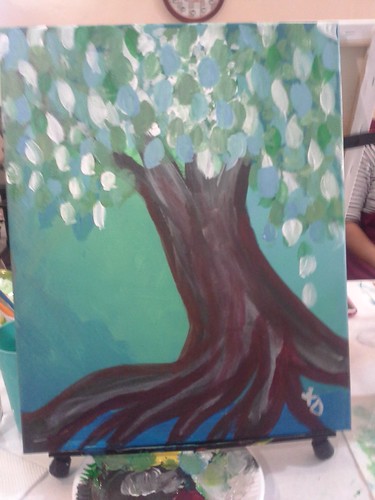 My leaves got a little out of control I think. 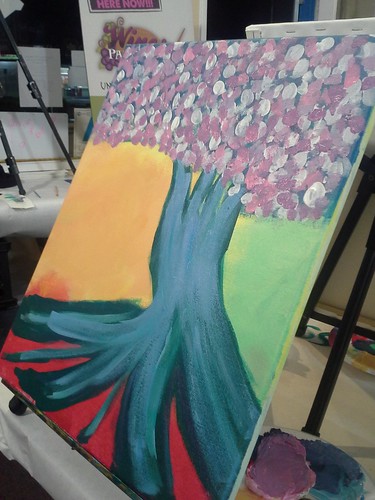 And although Thatmom's looked much more like the sample, it was still not up to her standards. 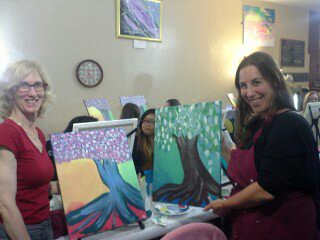 But it was nice to spend a night out with my mom, just us girls.  We don't get to do that very often.  And even though it wasn't really mother's day, it felt like that for us!
Posted by That Girl at 1:00 AM