The Rest of August

Start playing your saddest music, it's pity party time! Once we got back from Mendocino and visiting little Ace, life swung right back into, well, full swing mode. We never stop going here in Thathouse. And I took TONS of pictures to document all of our adventures. And then September came rolling around and we headed to Hawaii. (Okay, so this isn't the pity party yet, but I promise it's coming REALLY soon). While we were in Hawaii, my camera died a slow and pitiful death. First the lens stopped closing right, which led to a bunch of SUPER overexposed cameras (those of you with SLRs understand what I'm talking about). And then all of a sudden, "poof" the entire thing went dead. No power. No on. No off. No picture taking. And in this "poof" moment, I think it wiped out ALL the pictures on the memory card. (Because I tried to take the memory card to one of those photo kiosks and it kept telling me there were no pictures on the card.) So I have no fun photos for you from the end of August till the middle of September. (Don't worry, I have loads of fun Hawaii pictures for you since Thatboy brings his fancy camera everywhere we go)

I'm also in the market for a new camera and taking recommendations! I'm trying to figure out if I want to stick with Olympus because I REALLY loved my camera (although I don't love the new version of my camera), or even if I want to get another waterproof (because it was super fun for snorkeling).

So my brief bullet points for what you're missing pictures of:

* The Del Mar Races. I've been trying to get Thatboy to the races since we moved to San Diego. I was finally able to get him to go because of the next bullet point. We had tons of fun, drank loads of beer, and made some new friends who explained to us novices some of the finer points of racing. We made bets and lost, picked favorites in every races, and I even wore a giant hat! (It was all I could to refrain from yelling at the horses to "MOVE [their] BLOOMIN' ARSES."

* Weezer! The reason I was able to get Thatboy to join me at the races is because Weezer was playing a concert after the last race. Which is one of the best parts of the races if you ask me. Every Friday and Saturday night after the last race is concert time. And you can pretty much get Thatboy to do anything if Weezer is involved. The concert was AMAZING. SO much better than the last Weezer concert we went to. They played all our favorite songs. Rivers was on his A-Game, complete with an awesome mash-up of MGMT's Kids and Poker Face. Rivers in a Lady Gaga wig? Fabulous. Thatboy, who also loves MGMT didn't think they would appreciate the homage. The audience sure did. I was even able to find a video of it on YouTube. (Is there ANYTHING YouTube doesn't have?)

*Thatdad's unveiling. Okay, even with the camera this wasn't something I'd have pictures of. It was hard, but we had a lot of family and friends surrounding us. And it's nice that we now have a headstone to look at when we visit the grave. We chose a quote from Billy Joel's "Lullabye" for the inscription:


*Disneyland 5K! Thatmom and I signed up for this months earlier when I was debating running the half or just the 5k. But it looked like the 5k spent more time actually in the park so that was the winner. Ms. Grumble McGrumbleson wasn't happy in the days/morning leading up to the race itself. (It didn't help that we HAD to go to the expo on Friday night before 7pm. HELLO, some of us don't live in Orange County!) In fact, as we waited for the race to start, she made me promise that we'd never run this race again. And then we started. And somewhere on Main St., Ms. McGrumbleson disappeared as Ms. Iloverunning turned to me and said we should all do this race again next year. There's something magical about Disney. I took a million pictures of Thatmom racing through the castle, in front of Small World, and of course all the characters! (Both the ones that work for Disney who are strategically placed throughout the park for people to take a "race break" and get pictures and autographs, as well as the many runners dressed in crazy costumes.)

Because I hate posts that have NO pictures (because really, do any of you, other than my grandmother, read this for my scintillating writing?) I figured I'd toss a recipe your way. When we went to the Weezer concert we brought our own dinners, because WE COULD. And we wanted to spend our money on overpriced beer, not overpriced concert food. This is a sandwich that is equally delicious both hot and cold. Which is probably due to the bacon, which makes everything delicious. Honestly, I never really got the allure of a BLT, because as delicious as bacon is, I need a little more than a bacon sandwich. So add some chicken. Grilled chicken- which loves bacon almost as much as a certain blogger I know. 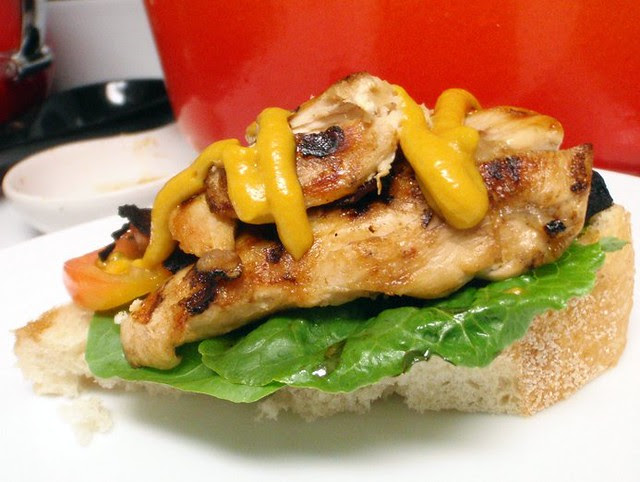 1) Grill chicken breasts
2) Place lettuce, tomato and bacon on bread. Top with chicken
3) Place honey mustard on top of chicken
4) Top with the remaining slice of bread.
Posted by That Girl at 9:08 PM