You know what's sad? When you haven't blogged since September.

You know what's sadder? When the last thing you blogged about actually took place in August.

You know what's saddest? When a friend of yours sends you a "Happy Anniversary" email in October, because she doesn't notice that your blog hasn't been updated in a month and talks about events that happened two months ago.


There's been a heck-a-lot happening in Thathouse which has severely limited my internetting capabilities. More on that later. Probably a lot later. Because I have SO much to catch you up on. But I should probably finish up with our Mendocino anniversary trip first!


We started off our last day by visiting Point Cabrillo Light Station. I almost felt like Alice going through the looking glass since we have our very own Cabrillo lighthouse down here in San Diego. 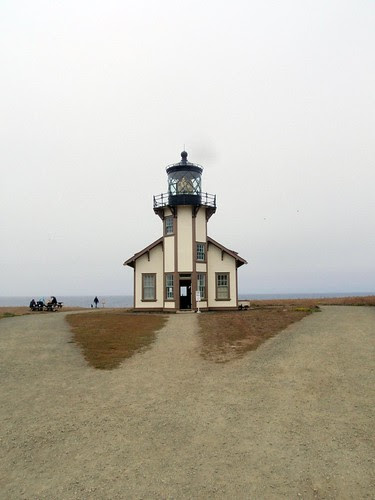 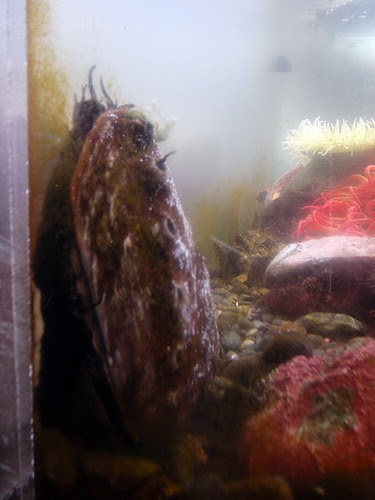 (This is what an abalone looks like when it's still alive, not on your plate)

But like the San Diego counterpart, this Point Cabrillo had some truly spectacular views. 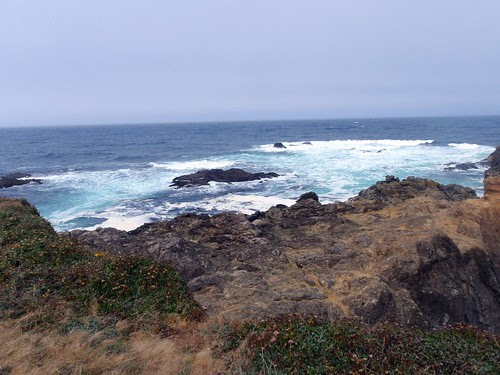 For most of our trip the ocean was covered in a dense fog. But as if Mother Nature knew we'd be leaving soon, she wiped it all away for our final day. 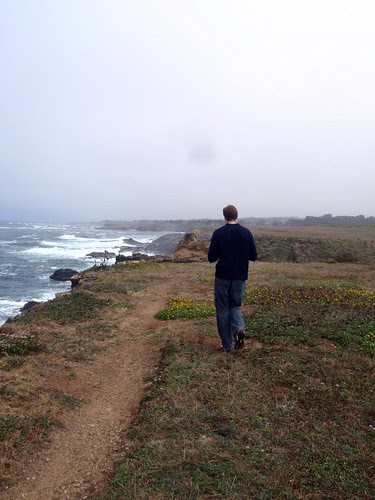 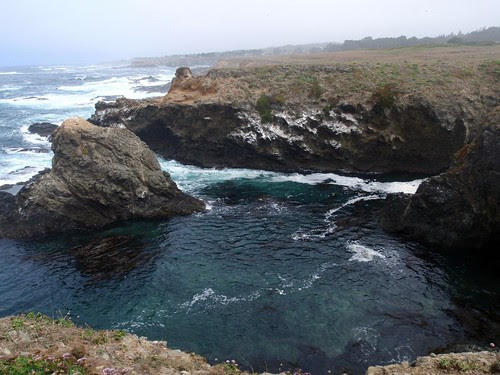 All that walking around and gazing out at the water made us hungry, so we headed up to Fort Bragg because one of the things Mendocino has to offer is an amazing array of beer. Before we headed to Mendocino we bought all the Mendocino beer we could get our hands on. We really enjoyed some of the beers from North Coast Brewery so we made a point of getting there on our trip. 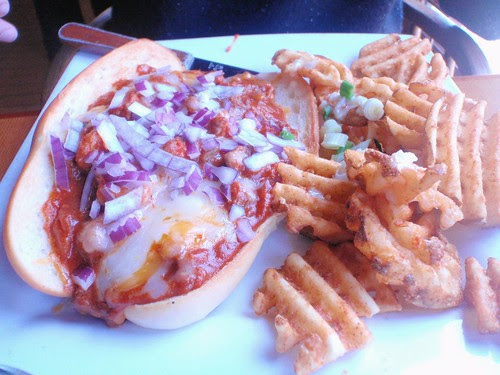 Thatboy saw a chili dog on the menu and was all in. Because, you know, we all need food to go with our beer. Or some of us do. But to be fair, how often do you see chili dogs on a menu? 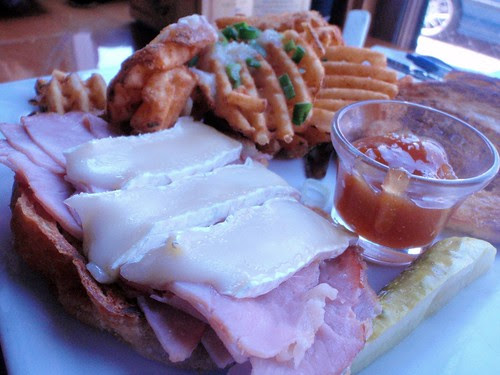 I went super high class. Well, high class as compared with the chili dog - ham and brie with mango chutney on a croissant. Did you notice the fries on both of our plates? They've covered in garlic. As all fries should be.

But we should get to the part you're all anxious for, the beer! 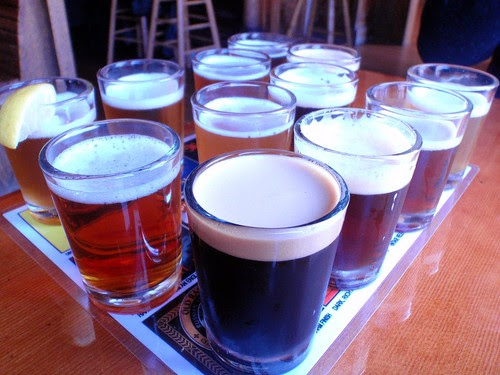 We ordered a sampler so we could try all their beers. And we took notes. On a napkin, but notes nonetheless. 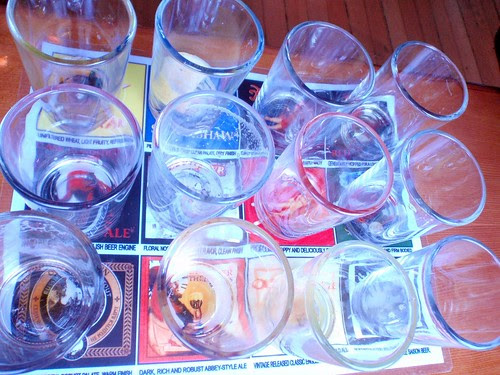 We already knew we loved the Brother Thelonious (in fact, we just had a bottle tonight), but we found some new favorites. We especially loved Pranqster which found its way into Thatbrother's birthday present last month.

And after all that beer, it was time for more walking and gazing. There was a lot of walking and gazing on this trip. This time we headed to a park that would allow Thatdog - Russian Gulch State Park. And we headed out on a coastal trail that let us take in how amazing the day was without the fog. 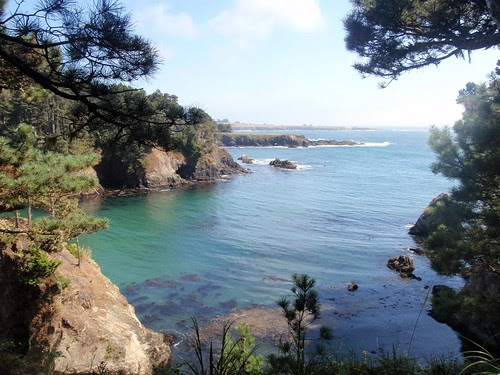 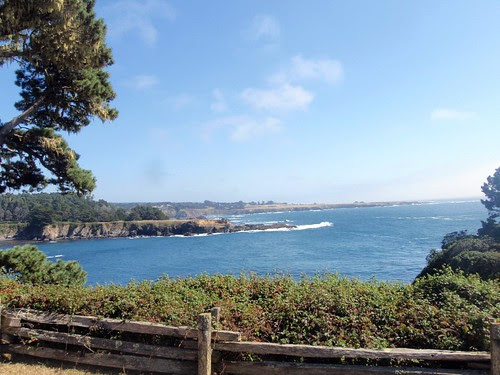 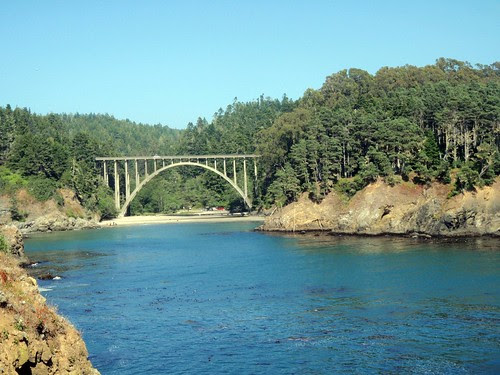 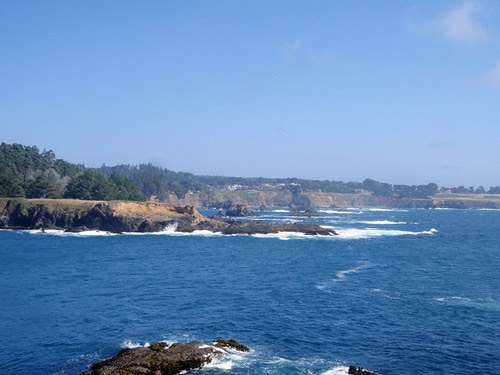 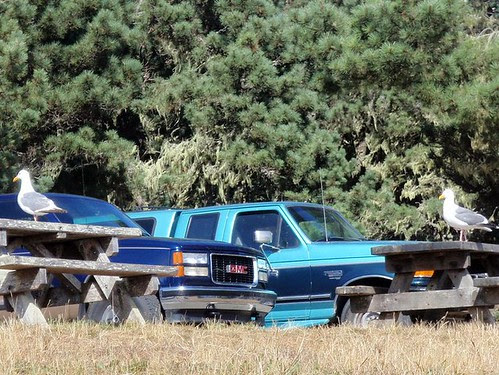 I love these guys playing mirror mirror on the picnic benches. Thatdog loved them too. He loves to charge them and let them know that it is NOT okay for them to be anywhere he can see them. 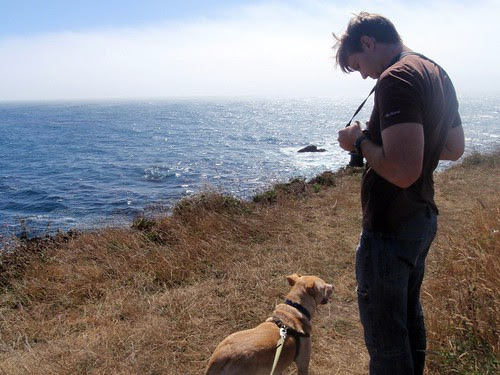 I love my artist in action shots. 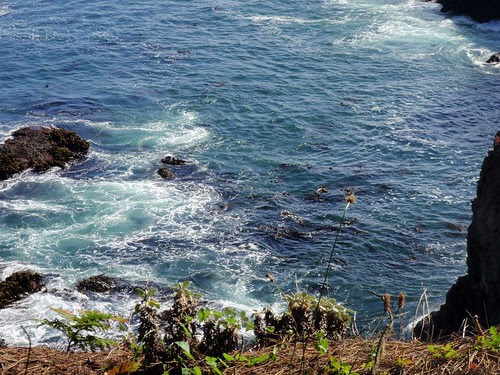 And honestly, we we hadn't had enough gazing, so we headed back to our room to gaze some more. I mentioned before we had a spectacular view of the ocean. We decided to take advantage of it since we could actually see it. Besides, how romantic is it to sit with your honey and watch the sunset? 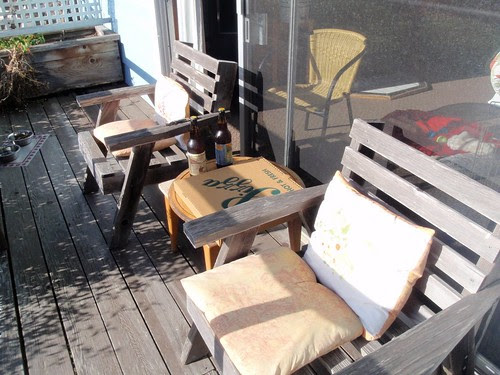 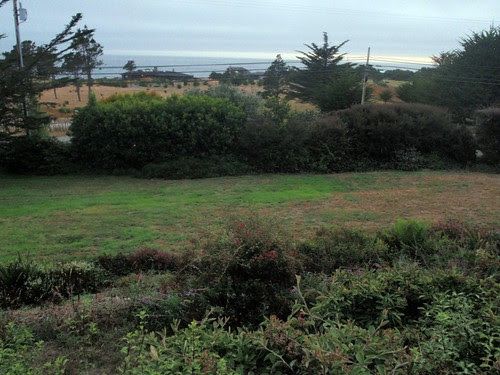 Well, maybe with your honey it would be romantic. I was stuck with this guy: 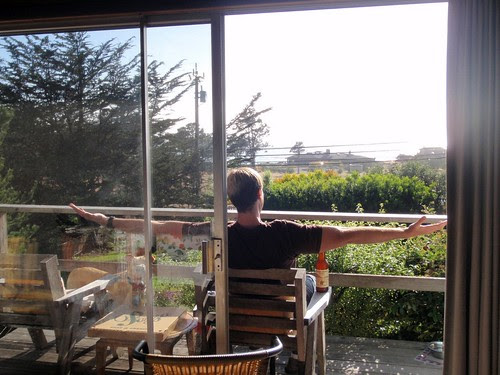 At least we had pizza! 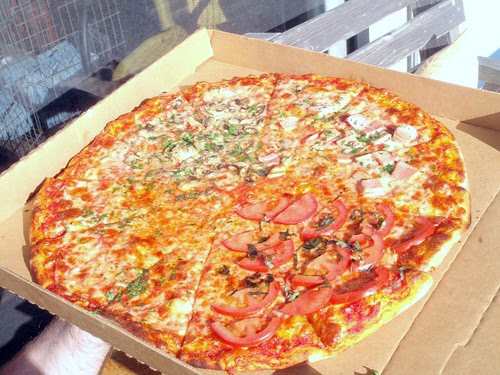 I let Thatboy pick out our pizza from Piaci Pizza. He ordered one that was divided in fourths, with each fourth having a separate topping. (Mushroom, cheese, roma tomato, and ham) Which he didn't realize when he ordered it, even though the menu spelled it out explicitly. 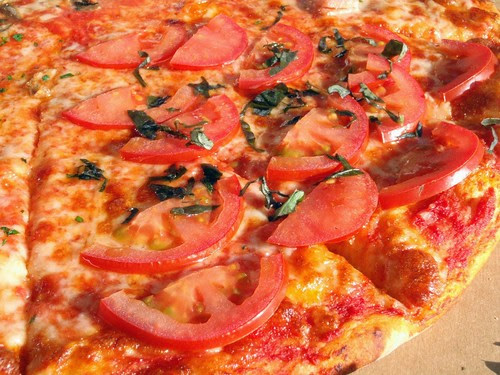 We both loved the Roma Tomato section best.


The next day we headed out - but not home. Because really, what fun would that be? Thatboy took the scenic route this time, which wound along the coast and made me feel like I was in some Merchant Ivory film. We made a stop in Point Reyes and discovered the mothership: 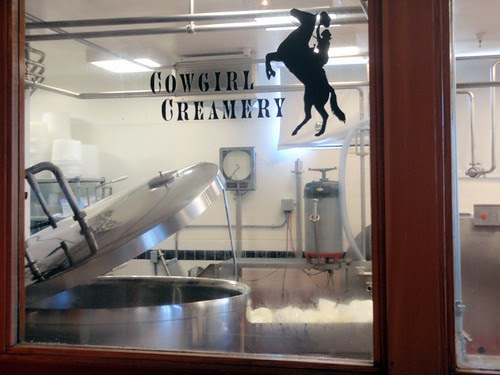 Cowgirl Creamery! I'm lucky enough to get this at my local cheese store, but not with NEARLY the selection you can get at their home base. And even what I can get isn't nearly as fresh. Thatboy and I had a picnic in the grass with leftover pizza, watermelon, and Red Hawk cheese that had been made that morning.

Okay, that's probably good for now. I'm EXHAUSTED and Thatboy's promised to pull the couch out so we can have sofabed Saturday night. PLUS I've got some sugar cookie dough that is just dying to be put in the oven. So bear with me - I'll post when I can and make the posts as entertaining as possible, but I can't make any promises as to frequency.
Posted by That Girl at 6:11 PM