Have you ever had a bad idea? I mean a REALLY bad idea? Well I am chock full of them. Someone should really pay me to come up with bad ideas, because right now I come up with them for free.

It started out simply enough, Thatmom wanted another family trip to Hawaii, since Kauai last year was such a success. She suggested going to our timeshare in Ko Olina on Oahu, since I'd never been there. Everyone seemed in, and so Toxicesq and China threw their oar into our boat and booked a week at the same time. Since it seemed like everyone was going anyway, I made the suggestion to Thatboy that he should invite his parents, since they owned a timeshare in the same resort. This was the beginning of the end. At first they declined, but then all of sudden they had a change of heart.

Spending a week with my inlaws is difficult enough as it is, but to spend a week with them in Hawaii? AWFUL. First of all, as I've already noted, TFIL hates ANYTHING that sounds like a good time. Second of all, they don't like being outside. Which meant their idea of how they wanted to spend their time involved never leaving their hotel room. Which would have been okay, except for the fact that Thatboy actually wanted to spend some time with his parents. So let me give you a rundown of a fairly typical day:

1) This part actually starts the night before when we inform the inlaws what our plans are for the day. At which point TFIL tells us he hates our idea. Doesn't want to go. Sounds awful. TMIL expresses interest and we invite her to join us solo. She insists she won't go anywhere without TFIL. Thatboy and I plan to do the activity alone.

2) The morning we plan to leave for said activity we get a call from the inlaws saying that they will be joining us. Yippers. We head off to our destination. Day one was the Dole Plantation. 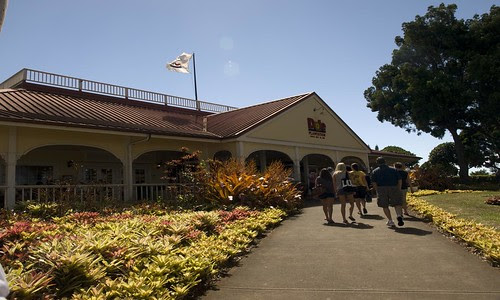 TFIL wasn't thrilled with the fact it was outside, so we promised to cut our trip short and just do a quick tour. No "World's Largest Maze" for us. 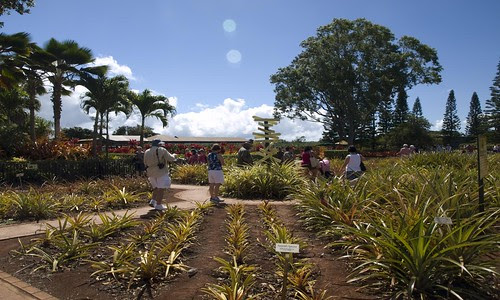 But, because I'm a crazy nut, I still LOVED seeing all the pineapple growing, right out in the open! This is a baby pineapple. 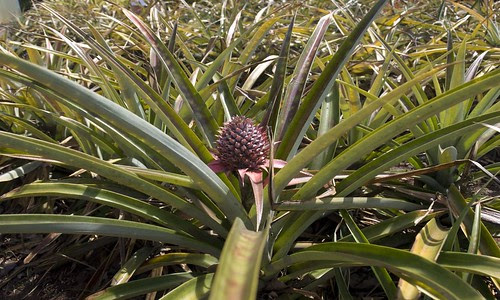 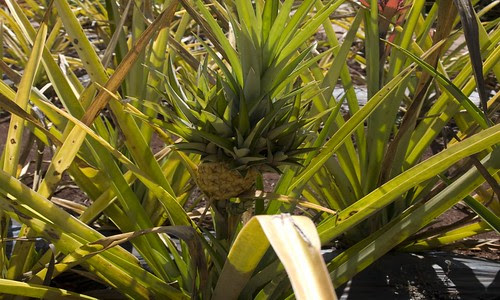 Eventually they start looking like the pineapples we all know and love. And that's about when the plant can't handle the weight and they start lying on the ground. Kind of like human teenagers. 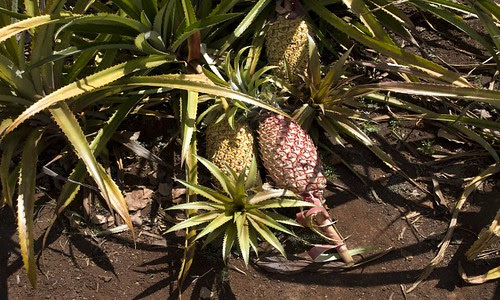 But the Dole Plantation has SO much more than just pineapples! There's also a koi pond filled with BSC koi. (They look like they're going to climb out and walk around, don't they?) 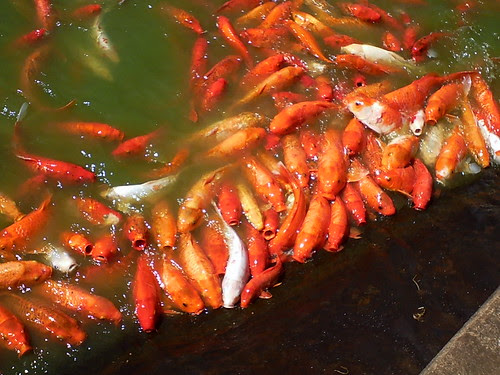 And there's a train (which we didn't ride, but I was okay with that.) 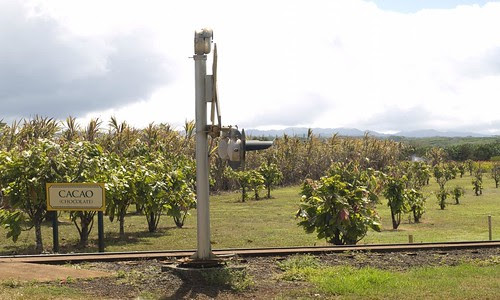 But TMIL who is a garden enthusiast wanted to check out the garden, and since we're nice like that we willingly obliged. 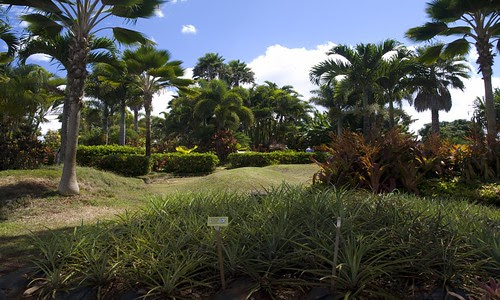 And we were treated to more hibiscus than I'd ever seen, in really weird colors! 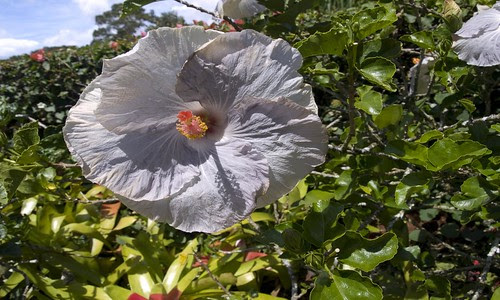 3) The complaining begins. Mostly because TFIL is never happy. Not only did he not like being at Dole, but we spent too long there. And yet, every time we passed by the plantation he would ask us "What's that building over there?" Guess he was paying really good attention.

Our next stop after the Dole Plantation was Turtle Beach. Another one of my pics. Because I really wanted to see turtles! But Turtle Beach gives you not just a view of turtles, but also the beach where LOST was filmed. We didn't do a LOST tour, but we did take advantage of this vantage point! 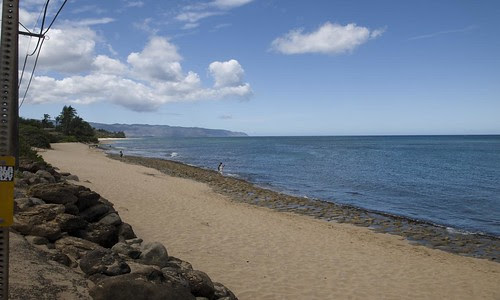 And Turtle Beach did not disappoint!!!! 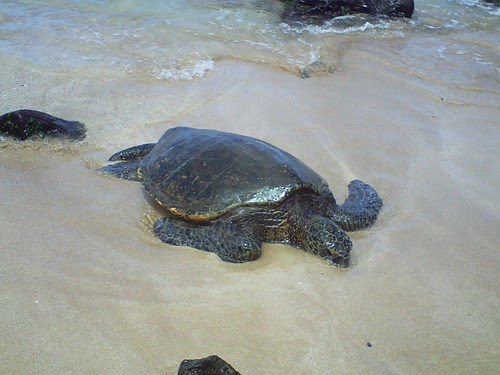 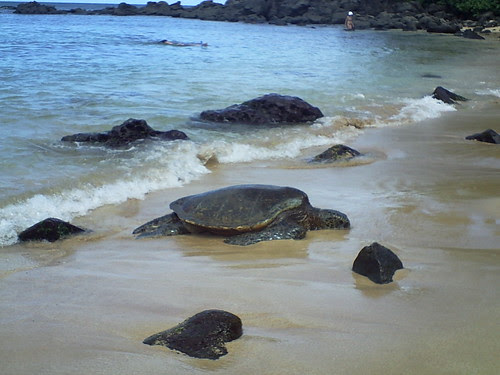 Thatboy and I had our snorkel gear in the car (don't leave home without it!) in the hopes we'd get to snorkel with the turtles, but it didn't take long to see that the inlaws were going to squash that plan too. Because neither of them wanted to hang out on the beach while we jumped in the water. (Don't worry, we headed back later that week with China and the three of us snorkeled and Thatboy got an up close and personal encounter with the turtles)

Turtles and pineapples made us hungry, so we stopped at one of the many shrimp stands in Kahuku. 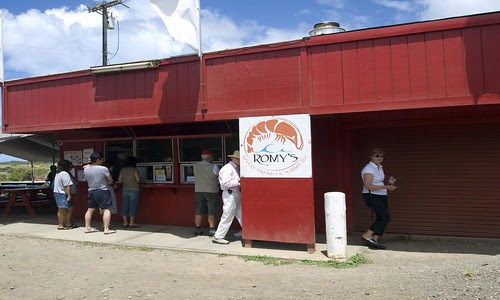 I'm not sure if Romys gets their shrimp from this giant pond beside the stand, but there were signs that you could go prawn fishing here. We didn't. Whether the shrimp came from here or not, you could tell they were fresh. 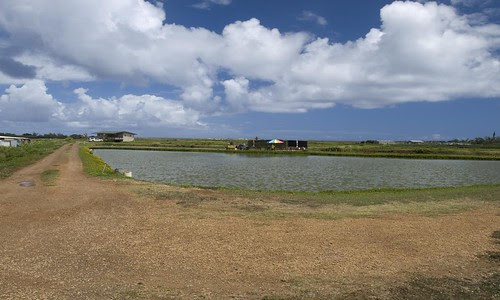 And this is one of the many things TFIL HATED about lunch. I thought it was a brilliant idea to stop someplace with an awning to protect him from the sun. But it was still outside. And he didn't like having to eat outside. He informed me that he "doesn't eat in places like this." 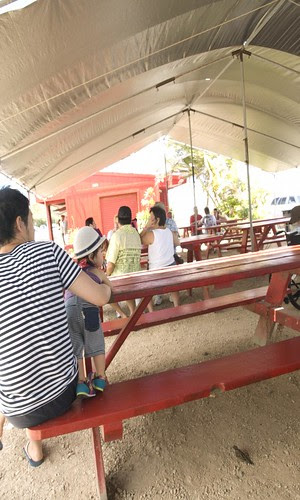 He also didn't appreciate the fact that our meals came in styrofoam boxes. However Thatboy and I LOVED our pile of sweet and spicy shrimp. I saw someone else's plate and knew we could split an order. And one order was definitely plenty. 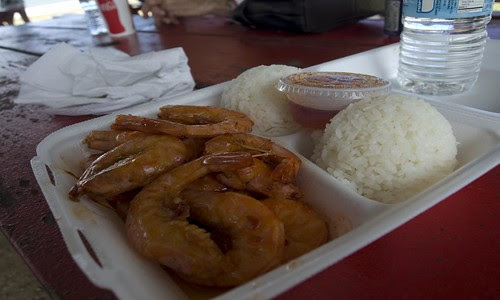 I love peel and eat shrimp. TFIL? Not so much. 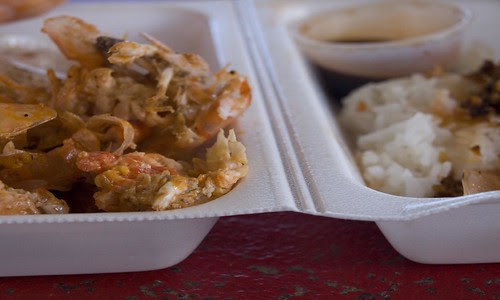 The one thing the inlaws both enjoyed was our journey to Laie Point, which offers gorgeous views of nearby islands (islets? Little itty bitty guys) 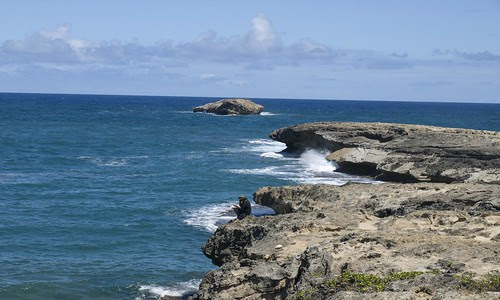 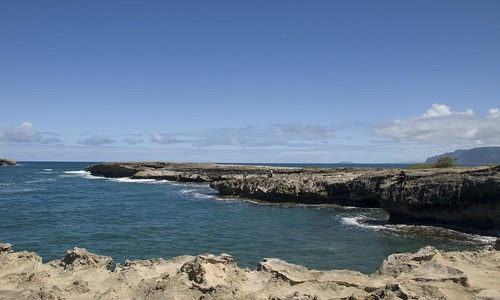 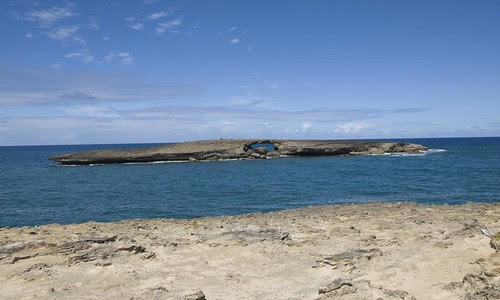 This is the real showstopper - the island with a hole punched in it from a tsunami. 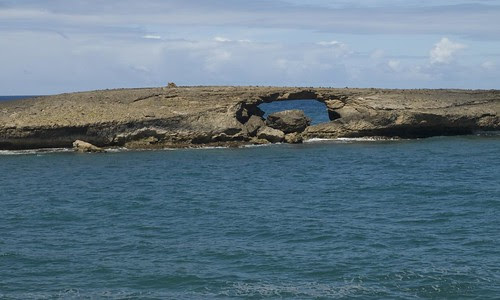 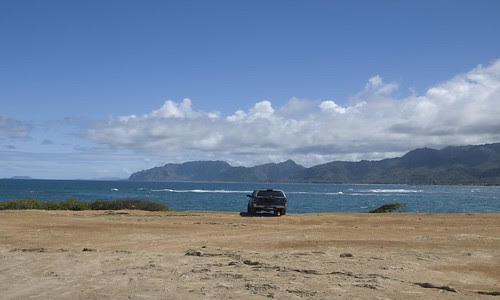 It really only took one day of spending time with the inlaws for Thatboy to realize he should never vacation with them and me at the same time. Unfortunately, we still had several days to go!
Posted by That Girl at 9:04 PM