Last year, for my birthday, I asked Thatmom to run the Del Mar Irongirl 5k with me. She hadn’t run a race since I was a little girl, and they had a mother/daughter division. I promised her that we could go at her speed, and she agreed. We finished in 43:32, which was a huge accomplishment for Thatmom since she wasn’t even confident that she would be able to complete the 3.1 miles.

This year I had planned to run the 10k in the same race, but when I told Thatmom of my plans, she asked if she could run with me, and do the 5k again. This year the race was on Mother’s Day weekend, so really, how could I say no? But the past few 5ks I’ve done with Thatmom have taken a lot longer than 43 minutes, so I told her that I had a goal for her – she was going to PR. Specifically, I told her I was going to have her finishing that race in under 40 minutes.

Thatmom wasn’t so confident in my plan, but I promised I wouldn’t push her at an uncomfortable speed, I’d just keep an eye on our pace as we ran. 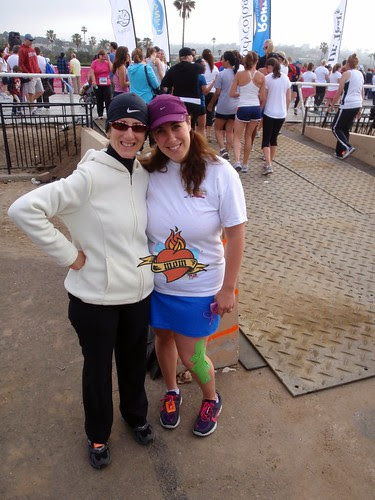 Last year, we made it to the race, right as it was starting, this year we got there a lot earlier. And it was a good thing we did, because the place was packed! There were so many more people than last year – a lot of the expo booths were already out of their free handouts. Thatmom was disappointed. 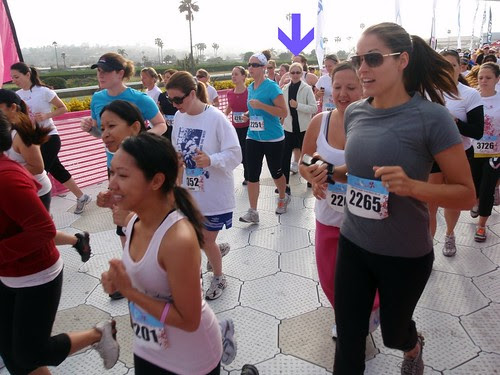 Because there were so many people, the race started late, but once it did…well, we were stuck behind a lot of people. Eventually we were able to break away from the pack and set a pace. I kept Thatmom at a regular pace, slowing her down when she tried to go faster (so she didn’t burn out) and slowing us both down when we reached the big hill of the run and she wanted to walk. Anyone who’s run with me knows I don’t walk, and I wouldn’t let her either, but I did slow our pace so she could keep up the mile that was remaining – that was all downhill. 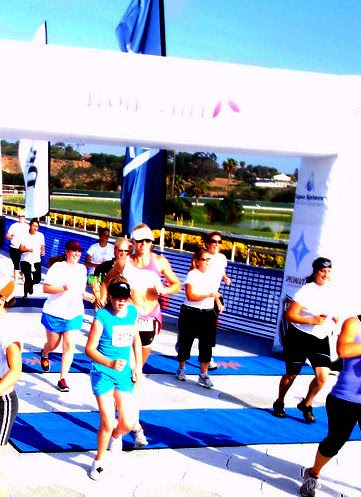 We finished the race in 39:39 – under 40 minutes, which made Thatmom so proud of herself. “I didn’t walk once!” she told Thatboy as we collected our medals and Thatmom was presented with flowers in honor of Mother’s Day. Then we went and stood in line to play in the free photobooth they had set up. 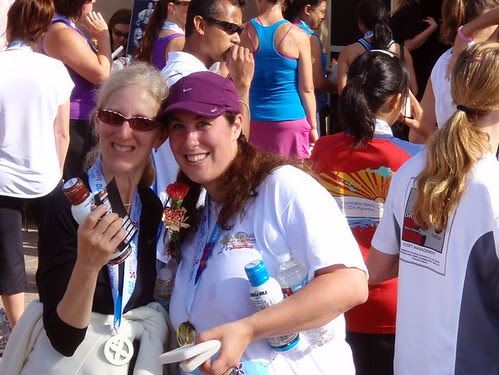 They were offering a free breakfast after the race, but I knew Thatmom would much prefer to go to her favorite San Diego attraction – Pannikin Coffee. She brings up the place on a weekly basis, so it was a given we’d head there to refuel. We spent the rest of the day getting her fitted for new running shoes at the San Diego Running Institute (which is really heads and tails over chains like Roadrunners), and then getting pampered with mani/pedis. I’ve decided that I really need a pedicure after all my races – it’s the best way to relax.

On Sunday, we all met up for breakfast in Orange County at Cafe Mimosa for Mother's Day. 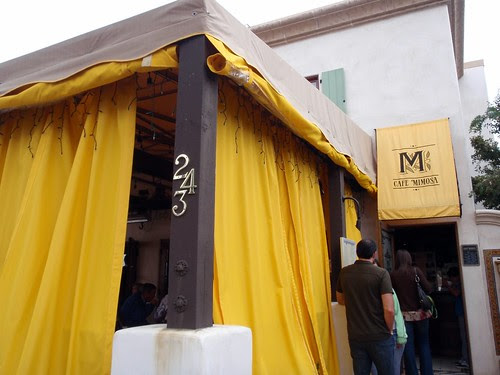 Given the name of the restaurant, we decided to each partake in one of the namesake drinks. There are plenty to choose from! The five of us didn't get through the entire mimosa menu, but what we had was good! 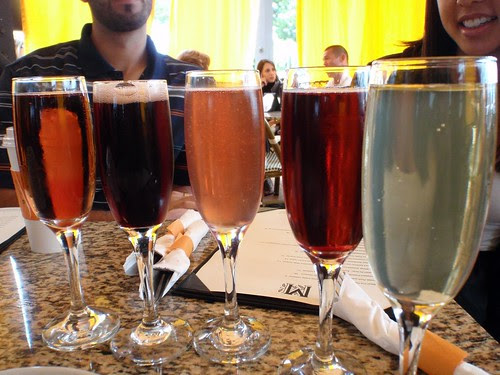 The woman of the hour had the tartine, which she declared the winner of the day. Egg whites with chives and swiss on a toasted baguette. 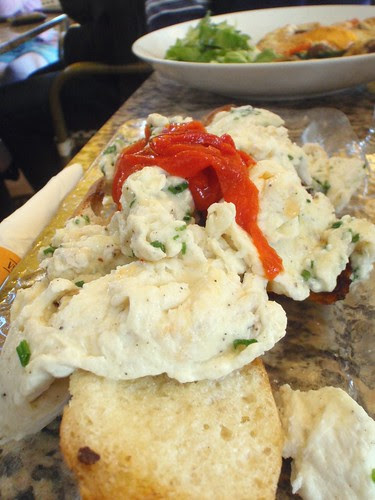 Thatboy totally chose wrong. He saw the "smoked salmon" on the menu and stopped reading. So when it came out with nothing more than little pieces of toast, he was disappointed. Luckily the rest of us had more than enough to share. 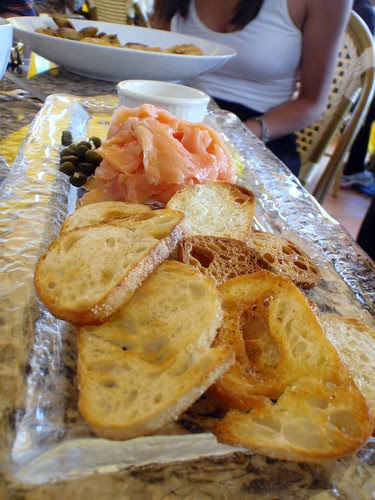 Thatbrother saw mushrooms on the menu and knew exactly what he was ordering! The egg white omelet with mushrooms, spinach, piquillo peppers, swiss, and romesco. 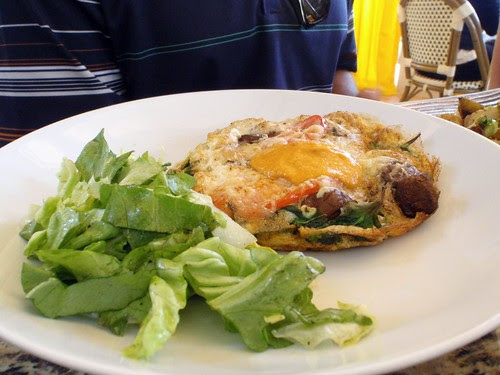 Everyone has a favorite ingredient. For Thatbrother it's mushrooms, for UDubb, it's bacon. She had the omelet du jour with bacon and tomatoes. 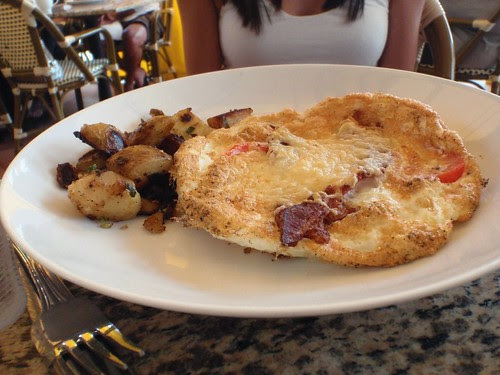 My favorite ingredient? Chorizo. So I was all over this chorizo scramble. Especially since the chorizo is made in house. The salty queso fresco and bite of the scallions added a nice contrast. 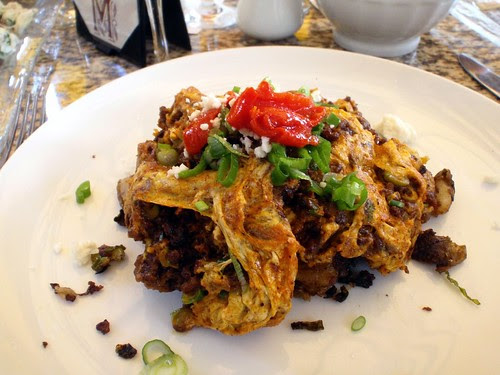 And so Thatmom's mother's day was filled with running, food, and family. Just how she likes it. Thatboy and I headed back home to prepare for the week. The original plan had been to spend the day at the beach, the two of us. Saturday had been gorgeous. But Sunday was just plain ugly and cold. So instead of the beach, the two of us curled up under covers, drank coffee, and watched movies. And instead of a summery beachy dinner, we had what felt like a more appropriate choice - soup! Thatboy loves barley in his soup, so I'm always looking for soups with barley in them. This scotch broth makes great use of barley and lamb necks - a really inexpensive cut of meat with great flavor. The soup was a huge hit, and a great way to end a weekend. 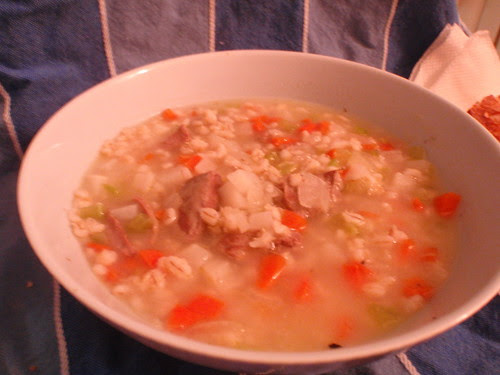 Scotch Broth (From the Fannie Farmer Cookbook)
Posted by That Girl at 8:06 AM