Every little girl loves horses, right? I think it's an innate part of being a female. Somewhere between the ages of 4 and40 there's a point where every girl wants a pony.
For me, this happened around 2nd grade. We had just moved to Themiddleofnowhere, PA and I had this teacher, this fabulous teacher who had us read "Justin Morgan had a horse." And after we finished reading it, she took us on a fieldtrip to the stable where her horse, Arabian Eric, was boarded. The whole class got to ride her horse and from that moment I was hooked. One of my friends and I began taking riding classes together every Saturday. The horse I rode was named Sophie, and to little 2nd grade me she looked like she was probably 8 feet tall. And so, when we began learning how to jump, I was understandably nervous. Except nervous isn't the right word. More like scared to death. Paralyzed with fear. You get the idea. I begged my parents to let me quit riding lessons and was perfectly content to maintain a slow trot when going on sporadic horseback rides.
Except, I still love horses. I love to watch them run, seeming so carefree. We live beside a ranch, and I get to see horses daily on my runs. Thatdog is fairly certain they are giant dogs and is always trying to get them to play with him. It is the benefit to living where we do that we have horses right in our backyard. And I don't just mean the ranch - I'm talking about the Del Mar Horse Track. 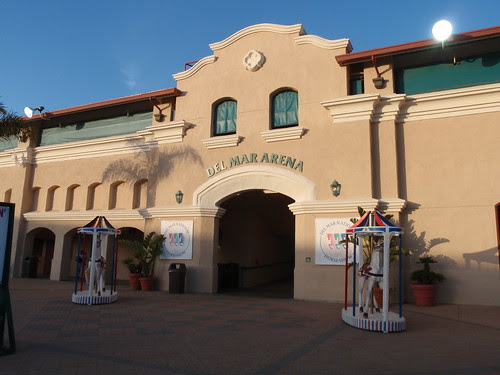 During the months of April and May, the Del Mar National Horse Show takes over the race track. There are various events ranging from competitions to choreographed horse dancing. Last Friday, Thatmom came into town and we decided to take her to the Five Bar competition. 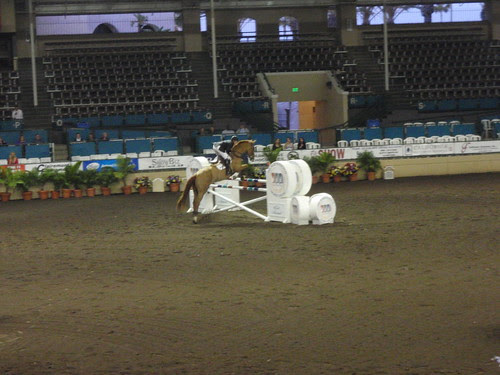 The Five Bar Competition is a jumping competition in which horses jump over a series of 5 gates, during 5 different rounds. If a horse knocks over one of the poles making up the gate, that horse is disqualified from the next round. After each round, the poles are raised - creating a backwards limbo. How high can you go? 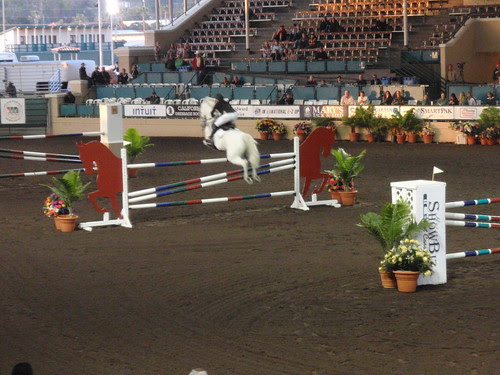 At first, Thatmom was very nervous about the whole ordeal. She was terrified that she'd see some horse or rider fall and die. Or break something. After the first couple of horses were disqualified by knocking over a pole, she relaxed a bit since there were no injuries. In fact, there was only one "fall" during the very last round. When the bar was raised to 6'9". One of the horses decided at the very last minute there was NO WAY IN HELL he was going to jump over that gate. Did his rider think he was crazy? He stopped short and turned, throwing his rider off. But no injuries. She jumped up and dusted herself and went to retrieve her steed who thought that it would probably be a good time to head back to the stables. 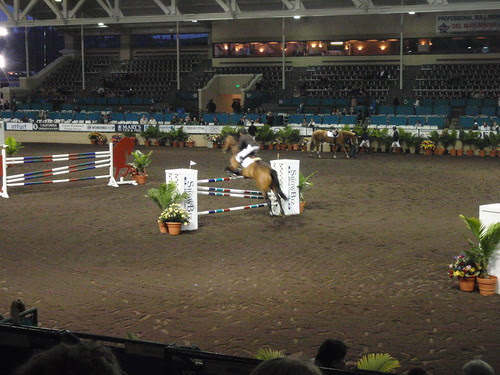 All of the horses were full of personality. You could tell by watching the way they carried themselves. Some were practically doing the bunny hop. Thatboy and I would turn to each other and remark - "that horse has got some hops on him." Thatmom picked up our conversation and started pointing out horses too. "That one has hoppys." 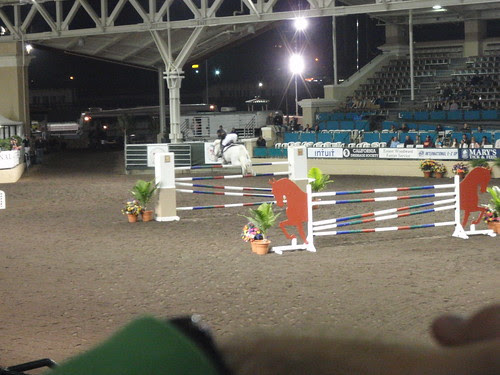 We all laughed like immature boys when we noticed many of the horses had some extra...jet propulsion helping them clear the gates. Jumping must make some horses nervous, because there was a lot of farting and pooping going on as the horses cleared the gates. Some of the riders were attuned enough to figure this out and would wait until the horse had done a little business before beginning the jumps. But most of the horses just let it go mid air. 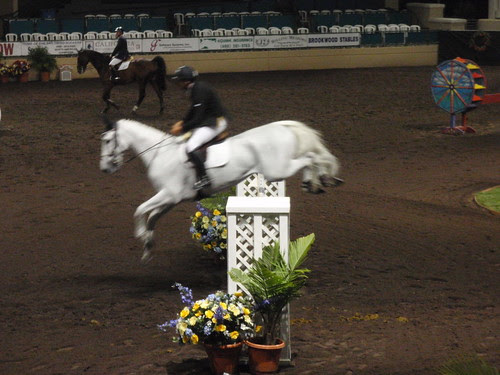 It was hard to pick a favorite because the horses were so much fun to watch. The jaunty ones with attitude, the graceful ones who appeared to sail over the gates, and the ones who had such shiny coats and tails they looked like horse models. Thatmom's favorites were the horses wearing "little hats." She decided she was going to get a little hat for herself and go as "Cracky Z" for Halloween. Cracky Z was the name of one of the horses, but would also make an excellent street name for Thatmom. 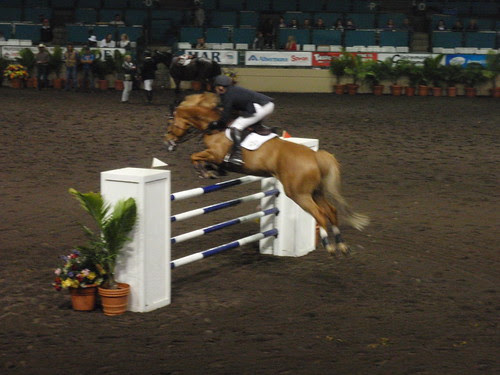 By the time the 5th and final round came, there were only 6 horses (out of 11) remaining. And as we watched horse after horse knock over the final 6'9" bar, we worried we wouldn't get to see a clear "winner." And then came London. The only horse who was able to soar over the final bar without even touching it. And the winner of the Five Bar and $15,000. 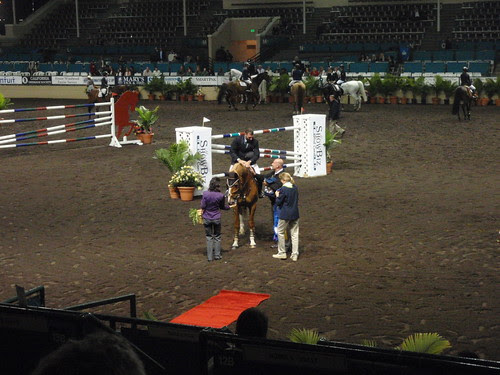 The crowd cheered for London as he finished his run. And he was given carrots and other goodies as his ribbons were awarded. 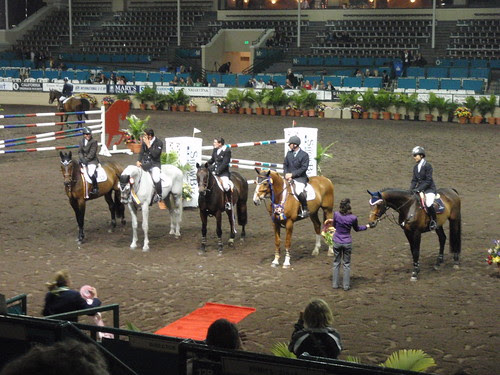 But everyone went home with some ribbon. See, all those horses are winners! Even if they're not as good and brave as London. (Which is nice, because I'm not as good and brave as London or his rider, but I do like ribbons.)
And because you are all good and brave, here's a special treat for you! A treat made with real horse meat. Okay, not really. Although we did joke about the losing horses getting sent to the glue factory. This treat is made with fruit. Which horses eat. Maybe not pineapple, but I bet horses in Hawaii eat pineapple every now and again. These are little jello cups I make to pack in our lunches during the week. Kind of like a carrot for my work horse, who hates the jello cups they sell in stores since most are sugar free (and Thatboy hates ANYTHING sugar free). They're easy enough to make and package in muffin liners. And everyone likes snacks that jiggle right? 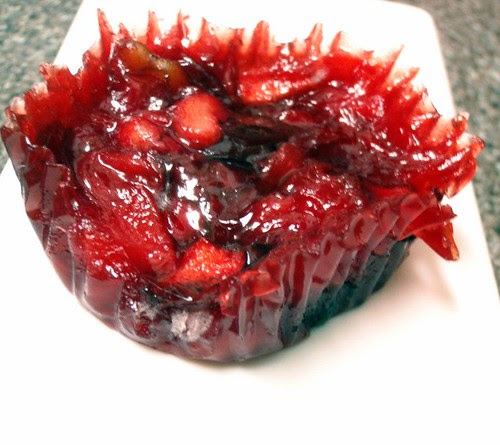 Fruity Jello Cups
1 can pineapple chunks
1 pkg Jello - you can use any flavor you like. Thatboy like red flavors.
1/3 cup chopped walnuts
1/2 apple, diced
1. Bring 1 1/4 cup water to a boil and pour over jello, stirring until jello dissolves.
2. Stir in pineapple, walnuts, and apple.
3. Pour into lined muffin pan. Refrigerate overnight.
Posted by That Girl at 1:02 PM