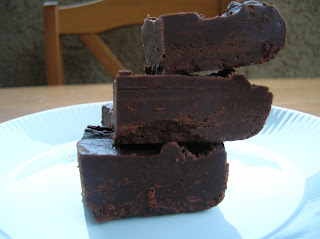 I've mentioned before that every now and again, after dinner, I get the BIGGEST puppy dog eyes from one of my family members. Unfortunately, these eyes usually aren't attached to the actual puppy dog. Instead they are the eyes of Thatboy and just a couple inches above the mouth that is usually saying something along the lines of "What's for dessert." The eyes get even bigger when he hears the usual answer "There's nuts and dried fruit in the pantry, or fresh fruit in the fridge, or frozen fruit in the freezer."

But last week was a tough week for Thatboy. He's FINALLY understanding what "work" is and why his wife is always exhausted. On the plus side, that means he's been especially kind, sympathetic, and caring. And when he gets like that, I like to give him a little pick me up.

I've never made fudge before, but I knew it froze well, which meant I could keep some of it in the freezer for another pick me up later (and since Thatboy STILL hasn't figured out how to open the refrigerator in search of food, I knew it would be safe.)

I grew up a few hours from Hershey Park which was, for a time, a yearly trip for us. Sad but true, one of the best parts of the park is the Chocolate tour, where you follow the bean from the ground to the store. You go through a warmer, the air smells like chocolate, and in the end, you're given a little bar of chocolate! Yum! So when making a new chocolate dish, I usually turn first to Hershey.

Hershey has a GREAT fudge for first timers. I can't believe how easy it is to make. In fact, when I brought some in for Tats to bring home, she thought the recipe was something that would be great to make with her son.

And you should see those puppy eyes light up when his simple question is met with "Oh, I made you some fudge." Priceless. 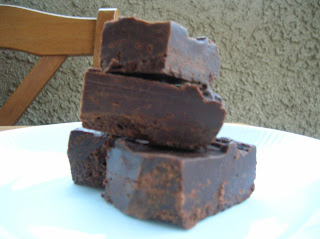