A picture's worth a thousand words 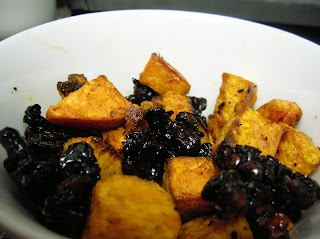 And this picture is terrible. I appologize. While it looks like I am trying to entice you to eat potatoes and coal, I can guarantee that no coal was used in the making of the dish. I don't know why the caramelized walnuts came out so dark in the picture. I could blame it on my camera, the lack of natural lighting in the kitchen, the fact that I made it so late that no natural lighting was available....in fact these pictures came out SO poorly I debated not even posting the recipe. Then I took a bite. Then another bite. SO GOOD! I'm not usually very creative with side items, mostly I steam, saute, or roast some veggies and we're good to go. I spend most of my time focusing on the main dish.

However, I have a seriously hard time resisting sweet potatoes. And I had some left over walnuts from cookie baking. Sweet potatoes and walnuts just seemed like a great complement to roasted chicken, don't you agree? And the leftovers are perfect to pack in lunch!

So hopefully I've earned your trust enough by now that you won't dismiss this idea merely because the picture is bad. I haven't lied to you yet, and I wouldn't recommend this if it wasn't phenomenal. 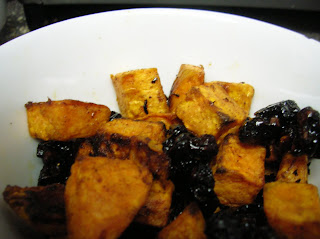