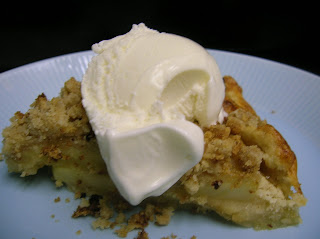 Apple galette? That doesn't sound very American. If I had to guess, I'd say it sounds downright French. And Wikipedia agrees with me: "Galette is a general term used in French to designate different types of round and flat crusty cakes." Hmmm, sounds suspiciously like a pie to me.... I looked through a bunch of recipes and most had one thing in common, a gorgeous display of sliced apples. As for me, I'm not very good at gorgeous displays, and really, who needs the pressure? So I decided to cover mine with a crumb topping....ohhhh now we're verging on apple crisp territory! It's always good to fall back on what you know and I know apple crisp!

I used my favorite pie crust recipe for this, but feel free to use your favorite! And the rest, well its as easy as....no, I won't go there, it's just too easy! 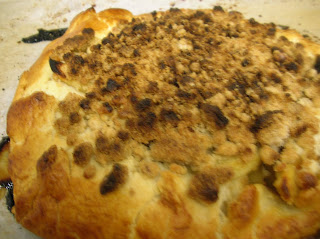 1) Preheat oven to 400. Slice apples and mix with brown sugar and cinnamon.
2) In a small bowl, combine sugar, nuts, and cinnamon. Melt 1 1/2 Tbsp butter and stir into mixture with a fork, forming large crumbs.
3) Roll out pie dough onto a lightly floured surface. Pile apples in the middle of the dough and fold sides over. Lightly beat one egg with 1 Tbsp water and brush over dough.
4) Dot remaining butter evenly over apples. Spoon the crumb topping over the buttered apples.
5) Bake 35 minutes.
Posted by That Girl at 10:13 PM