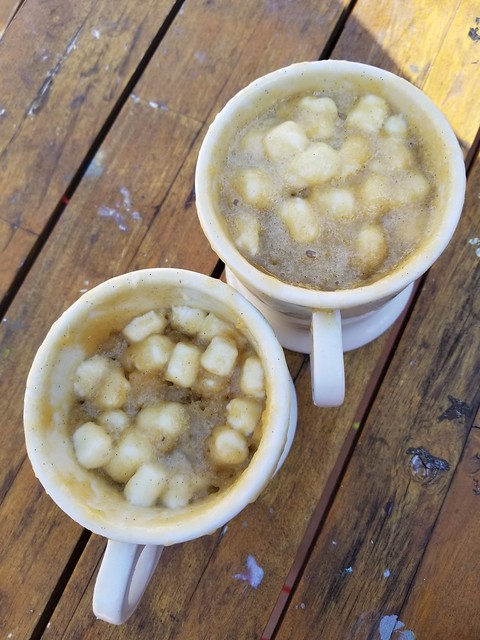 This weekend we got into our DeLoreans and headed back to the 80s.  Mostly it was just Thatboy and I reliving our childhood memories and dragging the kids along with us, but they seemed to enjoy the ride.  Like when Thatkid asked if I could help him dress the part. 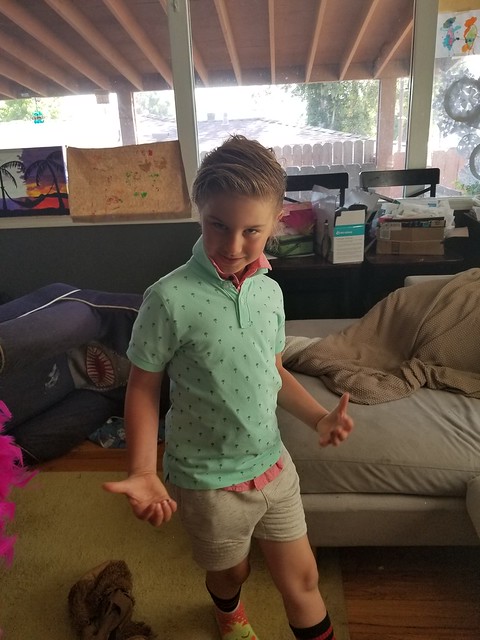 We started the morning out with a little Mousercise, which Thatbrother and I used to do all the time when we were little. 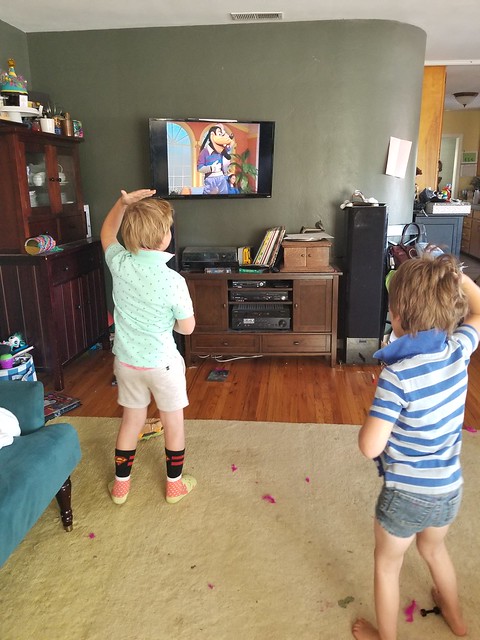 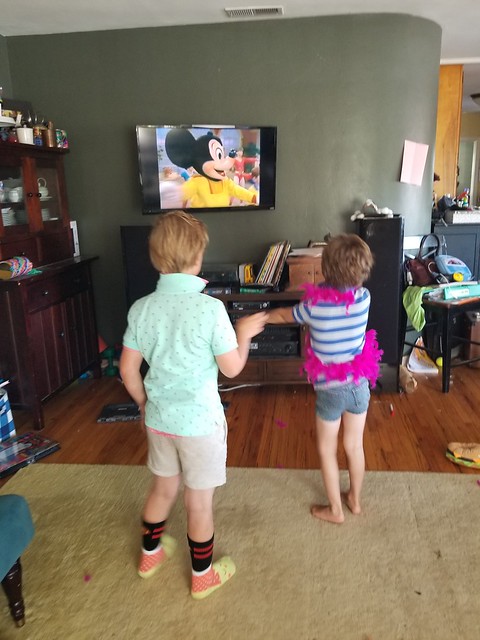 We followed this with some intense koosh-ball game play. 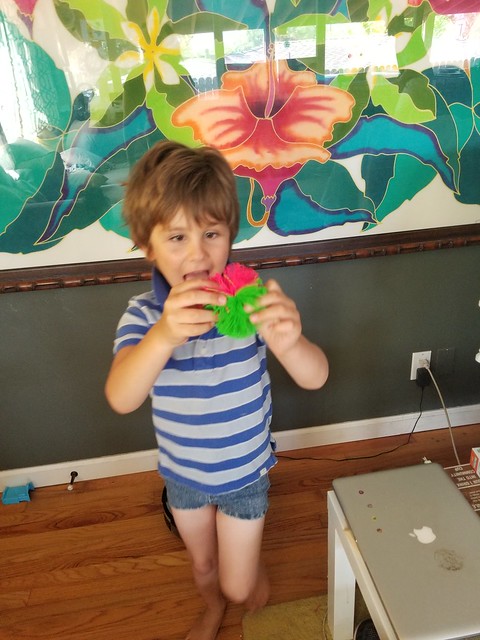 We took a break for some lunch, fluffernutters, bugles, and capri suns.  The fluffernutters were a nod to my dad who used to make them for us when my mom was out of town. 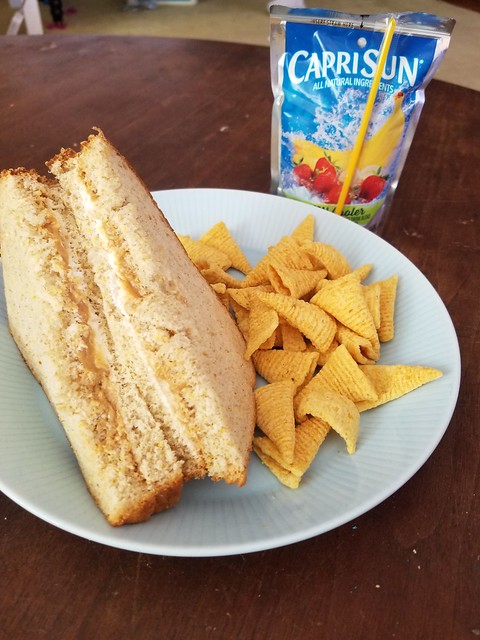 The cornerstone of the day was saved for after nap.  We've been watching the new season of Double Dare as a family so the kids are familiar, but obviously it's something Thatboy and I grew up with in the 80s too.  You think your kids like slime? OUR GENERATION INVENTED SLIME!

I set up our very own Double Dare obstacle course in the backyard.  And the kids loved it.  I set it up so they would each have 3 obstacles to get through.

Thatbaby started it off with the first obstacle - The Tank. 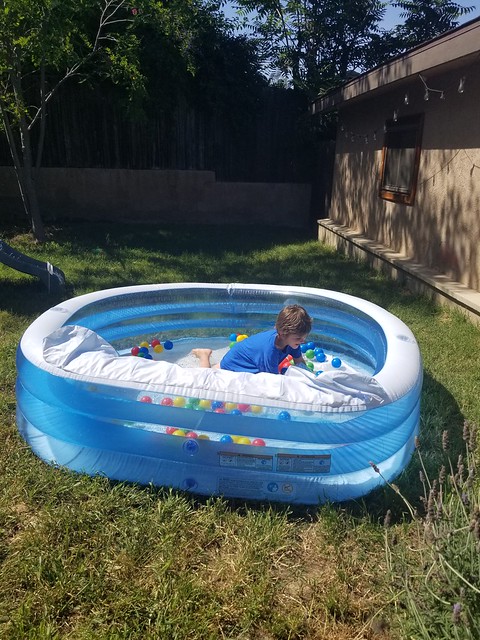 My goal was to fill our pool up with ball-pit balls, but once I dumped them all in, I realized - our new pool is REALLY big.  So I added water.  Thatbaby had to wade in and across and search for the flag, before passing it off to his brother. 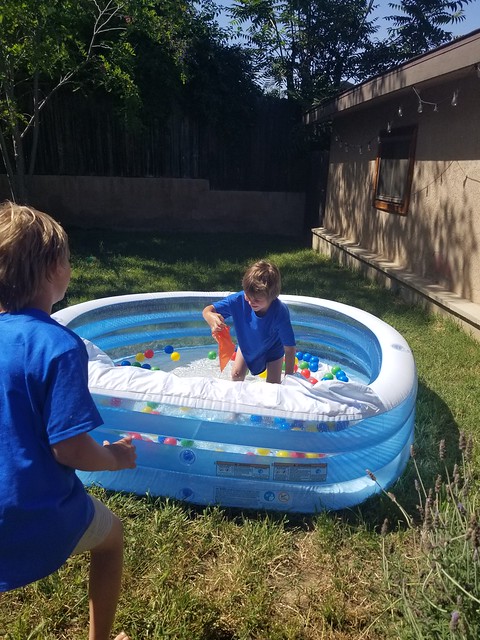 Thatkid took off running to the second obstacle "Inside Out." 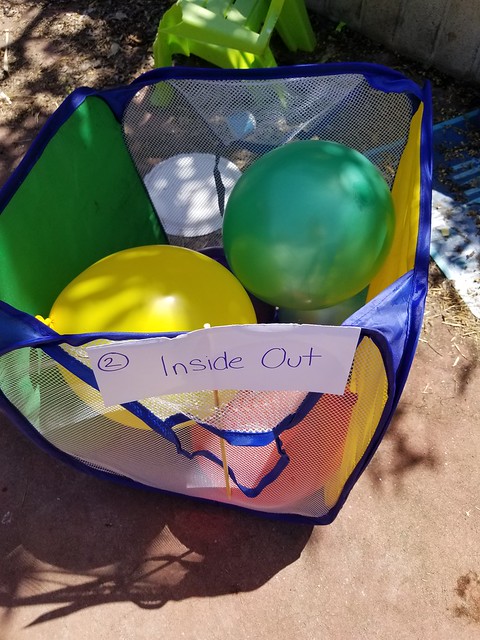 Thatkid had to pop balloons to find the one which held the flag inside. 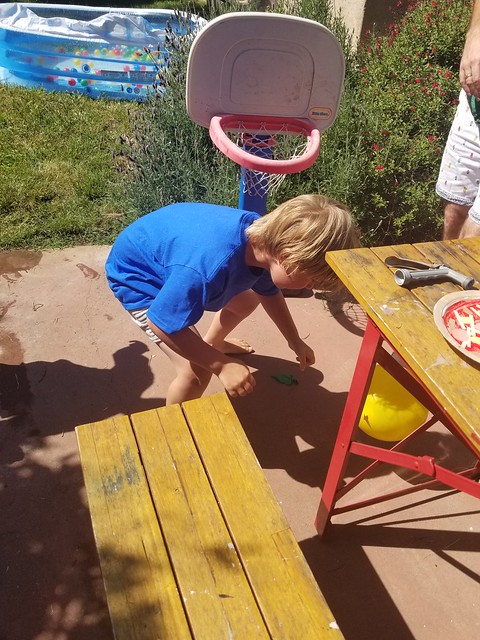 He passed the flag off to Thatbaby who took it to Obstacle 3 - The Pie Shop. 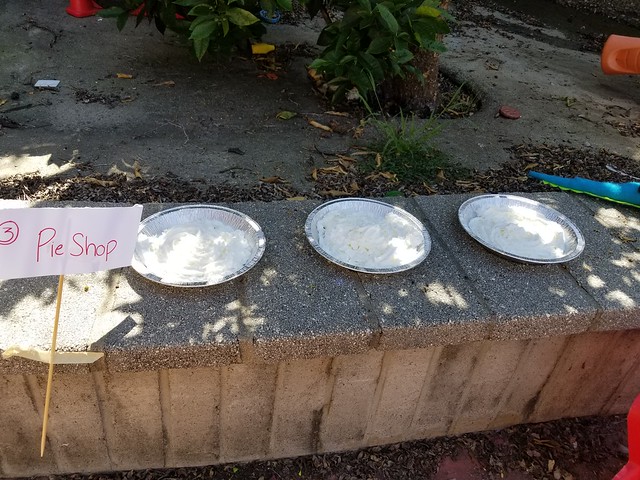 Hidden in one of these pies was - you guessed it - a flag! 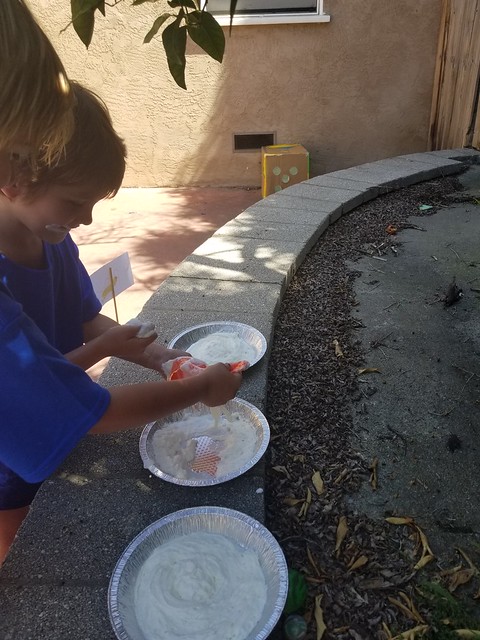 Once he found the flag, Thatkid went running over to The Swamp. 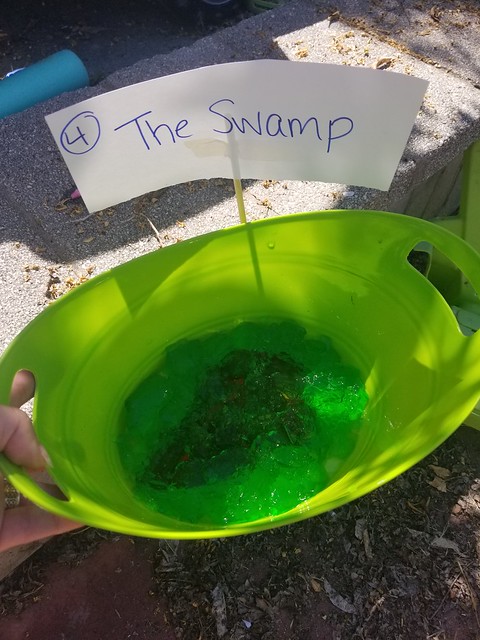 He had to dig through the jello to get to the flag buried below. 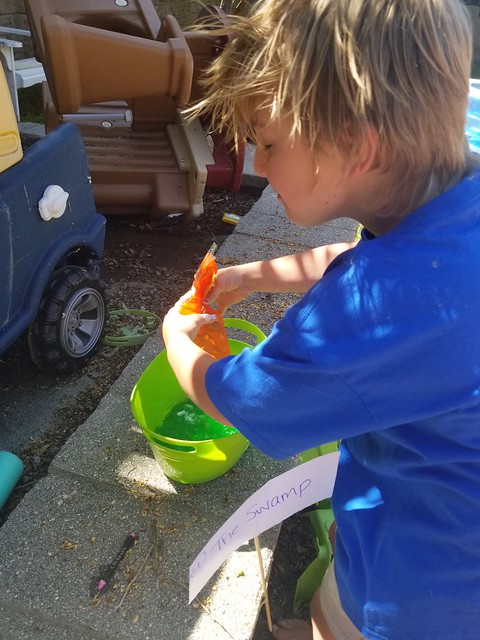 Thatbaby's next obstacle was sewer chute. 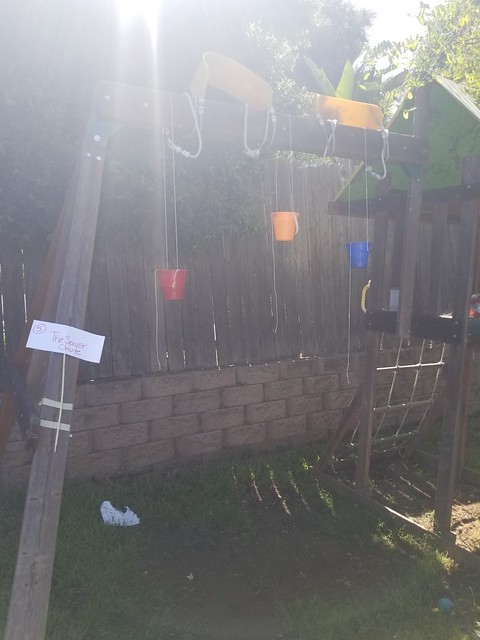 Inside two of these buckets were slime, and one held water and he had to dump them out to find the one that also held the flag. 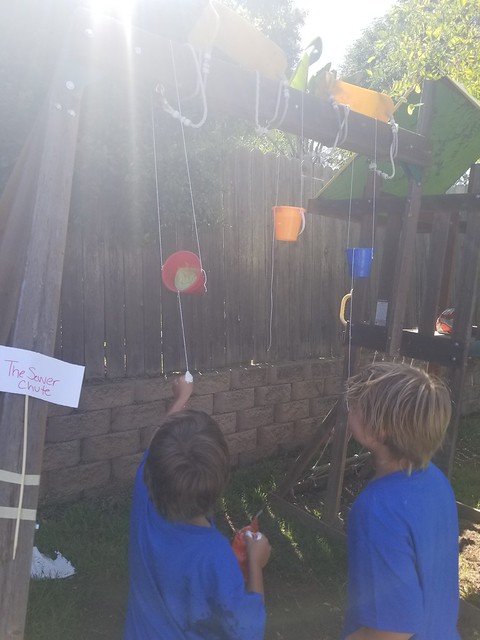 They weren't dumping as well as we would have liked, so Thatboy helped them along. 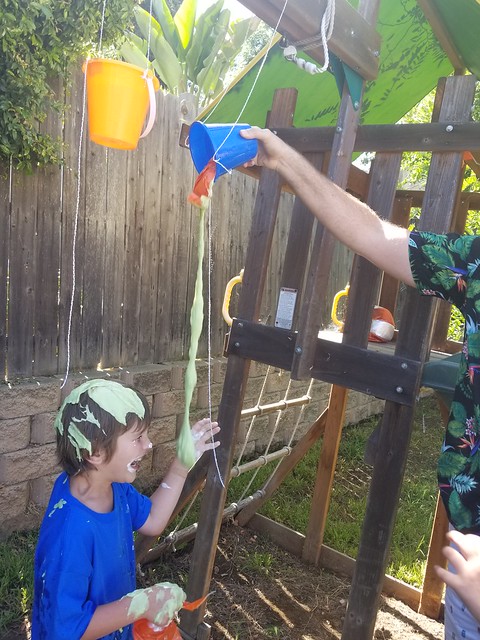 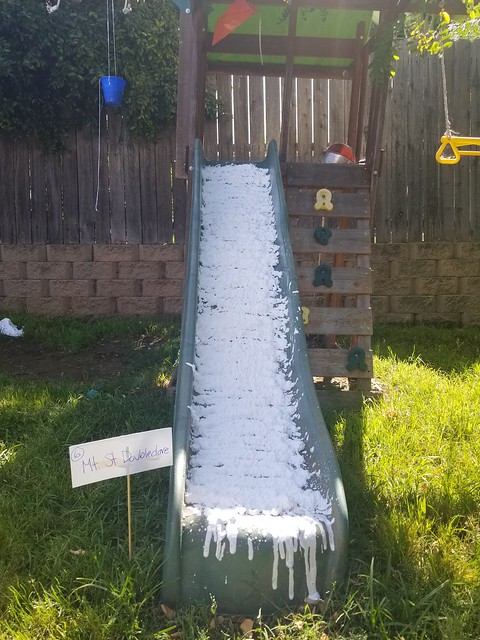 Thatkid had a really hard time getting to the top, he eventually resorted to using the climbing wall beside the slide. 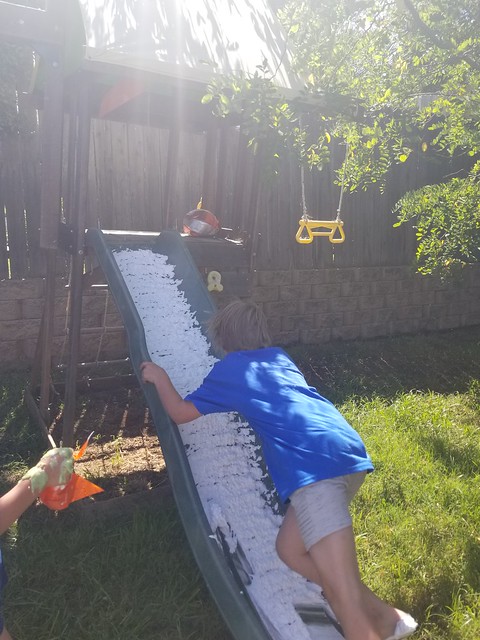 We let them play in the obstacles for a bit more, then sent them inside to bathe and clean up before dinner and a little Back to the Future.

And then we dimmed the lights, turned on a disco ball, threw glow bracelets and necklaces on the kids, gave them air guitars, and pumped up the 80s jams. 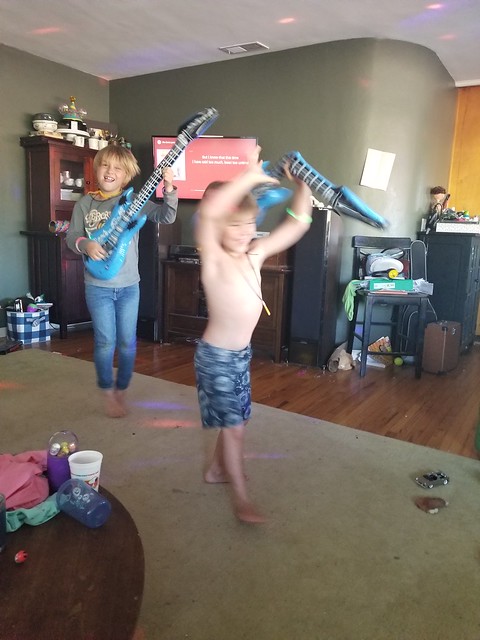 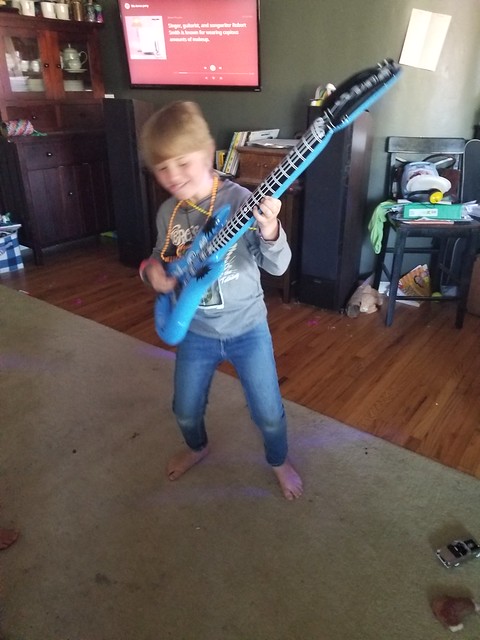 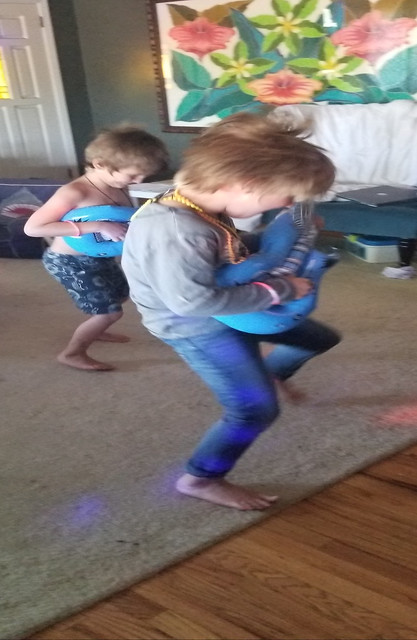 Neither of the kids wanted to go to bed, they wanted to dance all night.  Thatkid even said the dance party was his favorite part of the day.

In honor of our 80s day, I didn't want to share with you the recipe for fluffernutters.  That would be like giving you the recipe for peanut butter and jelly.  Almost exactly.  Instead a recipe inspired by the fluffernutter - a fluffernutter mug cake.  I made these for the boys last week as kind of a preview of what they'd be getting on the weekend.  They're great because they're so easy to make and this one makes two portions - perfect for 2 kids! 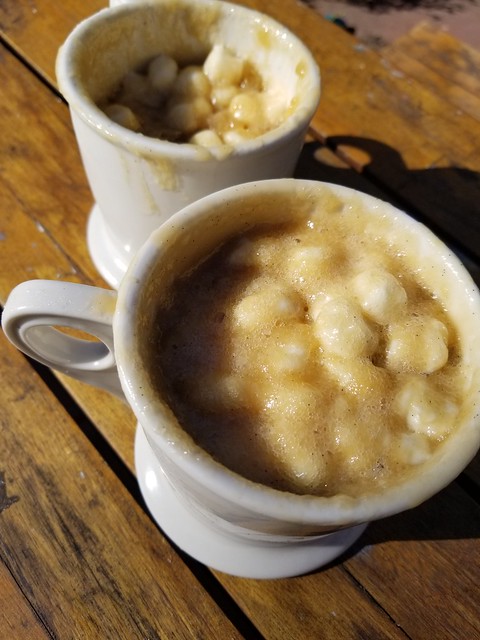