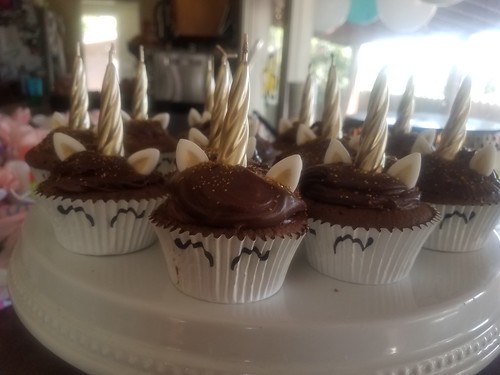 Thatbaby has been very into unicorns this past year.  I'm not sure where it came from, other than the fact that unicorns are everywhere.  Including some of his favorite television programs like Peg and Corn, or Go Away Unicorn.  In any event, it's been unicorns, unicorns, everywhere unicorns around this house.  He even asked for a unicorn donut for his birthday breakfast. 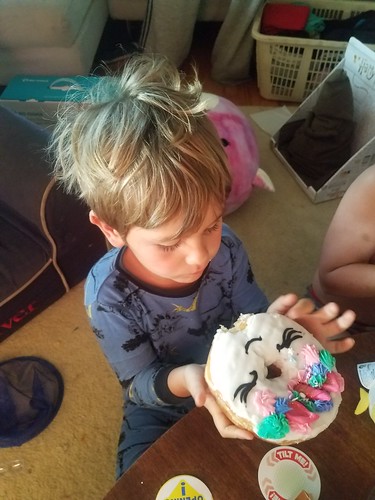 So it should come as no surprise that he really wanted a unicorn birthday party.  And we aim to please round these parts.  It doesn't help that unicorns are everywhere right now, making this one of the easiest parties to plan.  Much easier than "Dinosaur Ice Cream" at least. 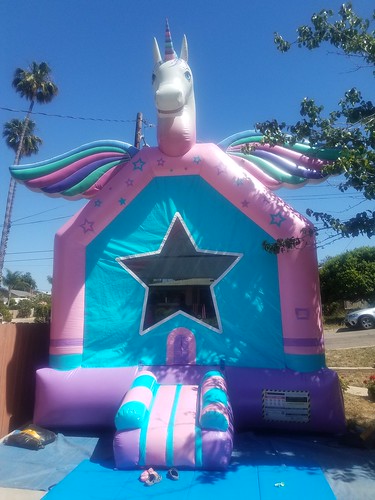 Thatboy and I also stumbled across this Giant Unicorn sprinkler which we thought would be hours of fun for our kids all summer and set it up in the backyard - asking our guests to bring bathing suits. 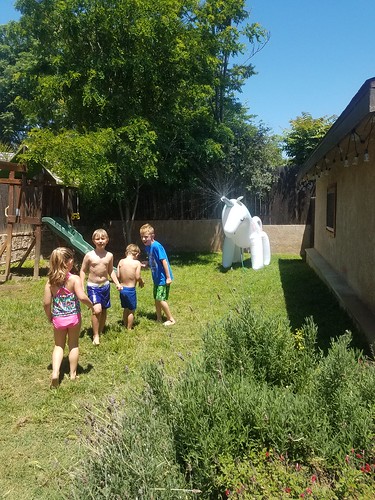 They did.  It was really hot that day, so it was nice for the kids to have a break from that hot house that was the jumper and cool down a bit. 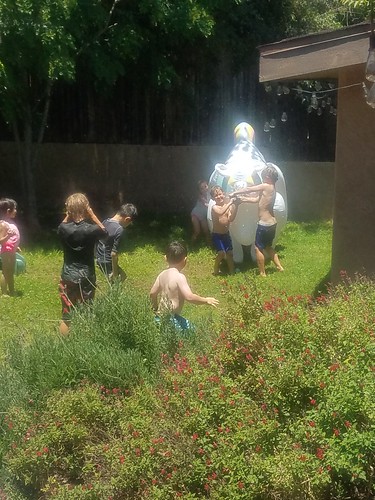 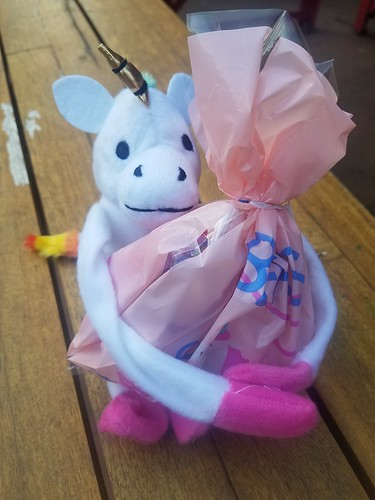 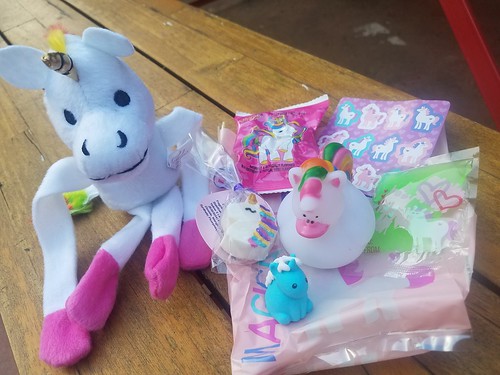 Unicorn decorations were everywhere, so it was easy to grab table coverings and centerpiece decorations.  I even found a balloon arch that matched the colors on the invitation, which became the colors of the party.  Thatboy and I are getting to be pros at blowing up balloons to create balloon arches!  They're my new favorite way to bring some fun into a party.  And the kids love tear them apart at the end. 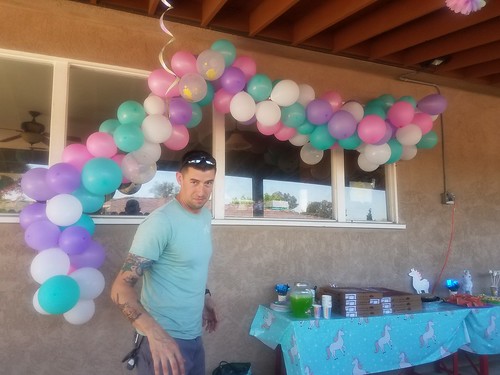 I even picked up some bright pink unicorn planters on clearance and painted them to match the party colors, placing them on the table with skittles and lollipops. 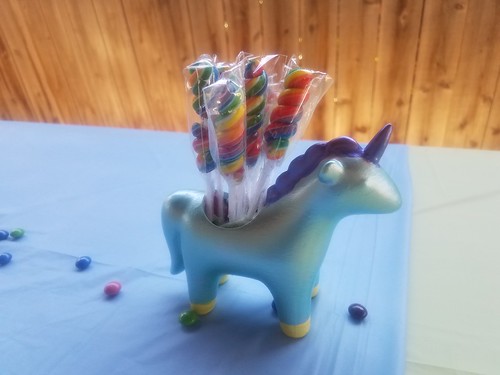 The unicorn dessert table was Thatbaby's pick - watermelon, unicorn popcorn, unicorn rice krispie treats, even unicorn poptarts.  There was also unicorn ice cream which we kept inside until it was time to serve it. 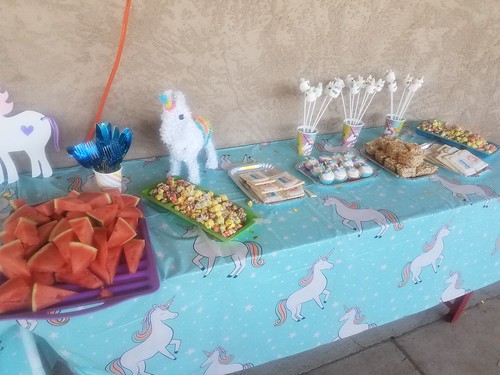 Unicorn horns were made with pretzel sticks, wrapped in caramel, then dipped in melted chocolate. 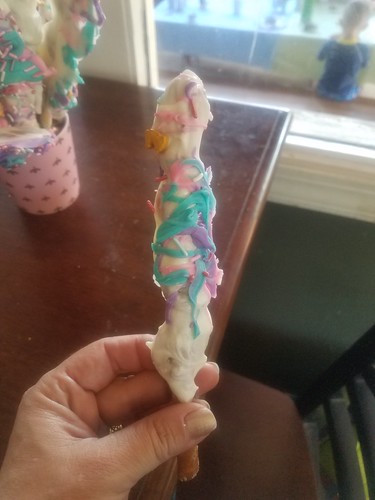 I made little unicorn marshmallow pops which the kids thought were awesome.  Because who doesn't love marshmallows? 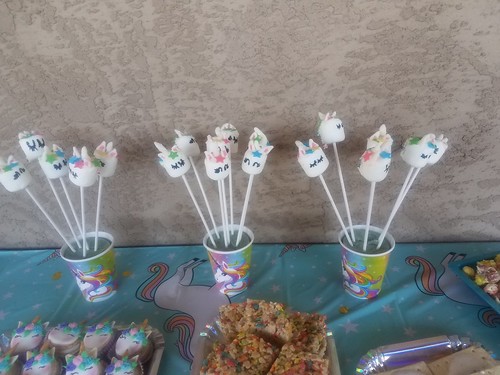 And I had unicorn macarons made by Candy's Sweet Treats.  These were not only beautiful, but absolutely delicious. 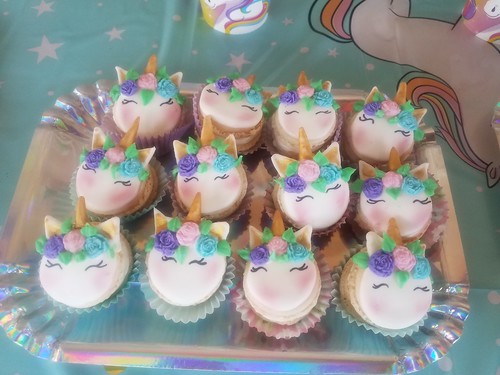 The kids weren't in love with unicorn kisses flavored water I purchased, choosing the "green fruit punch" requested by Thatbaby.  The grownups however?  They loved them. 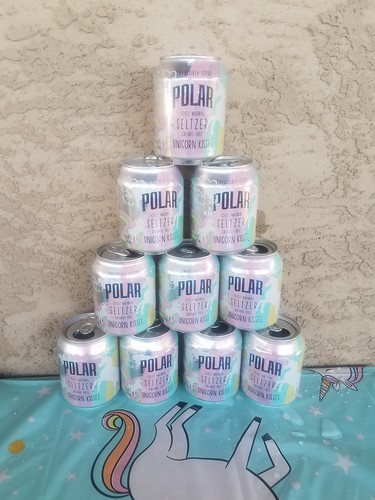 The piece de resistance however were the unicorn cupcakes, a special request by Thatbaby.  He wanted unicorn cupcakes instead of a unicorn cake, and when I showed him pictures of cupcakes with colorful frosting swirls he told me he wanted chocolate cupcakes with chocolate frosting.  So these weren't the most colorful part of our party, but they may have been the most delicious.  Chocolate and gold look so festive together anyway.  I whipped out my Dorie Greenspan "Baking from My Home to Yours" book and found the perfect recipe.  Chocolate chocolate cupcakes. 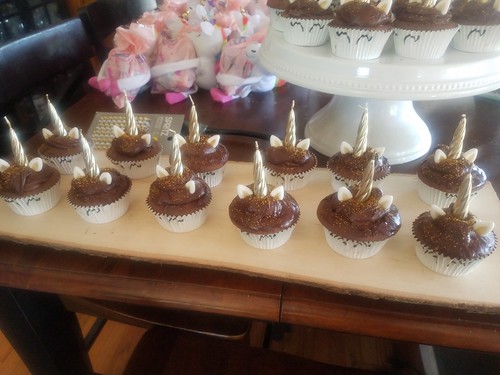