This story starts back in January of 2018.  Back when there was a draw for the 2018 Seawheeze Half Marathon in Vancouver.

So in January 2018, I suggested that the three of us enter the drawing for the SeaWheeze Half Marathon for the 2019 race.  And we did!

Unfortunately, as is the case with random drawing entries, we didn't all get in.  Which meant Sugarkissed and I were heading to Vancouver, but Stiny would not be joining us.  And really that just means we'll have to run it again one year WITH her.

SeaWheeze is a two day event that is jammed packed and begins the day before the race.  Packet pick-up included all sorts of fun like hair appointments, nail appointments, sports bra fittings, tattoos, yoga, meditation.  I signed up for some late afternoon appointments because I thought I would get in early afternoon on Friday.  I ended up getting in a little later than expected and headed right to the Convention Center where packet pickup was. 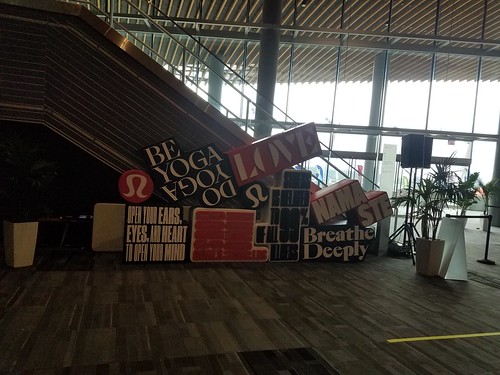 I managed to make it to both my appointments for hair and nails. 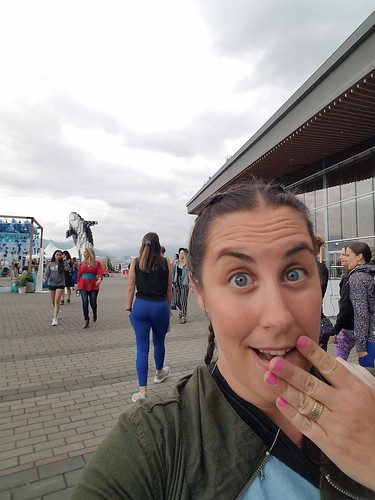 And then I found Sugarkissed! 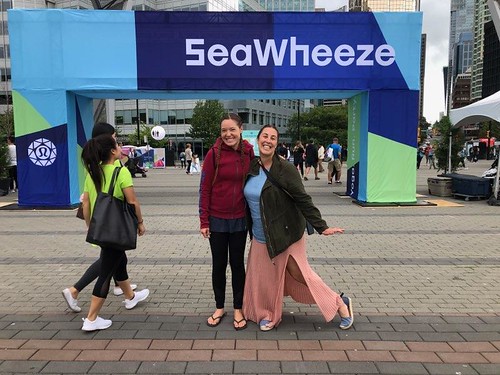 My plan was to head to hotel and check in, then return for some more of the fun and yoga and meditation.  But once I got to the hotel I realized it had been a long day and I really didn't want to head out again.

Plus, the hotel had left me a nice little welcome package! 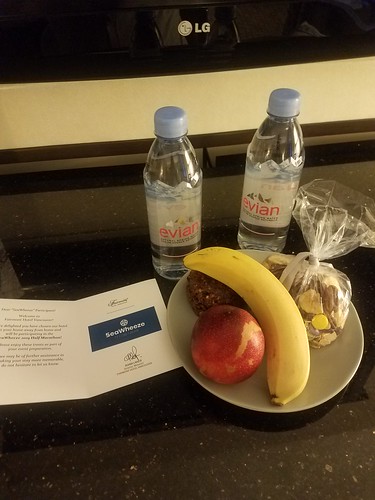 I grabbed dinner at the hotel restaurant and called it an early night.  The next morning I headed back to the Convention Center.  And I wasn't the only one!  There were a bunch of people heading from my hotel, or nearby hotels.  And at every corner we picked up more and more people. 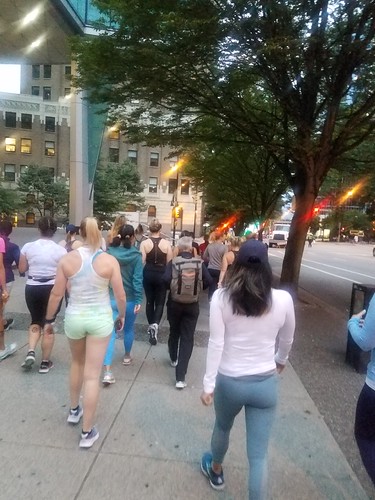 The weather was perfect - in San Diego it's been really warm and humid, but in Vancouver it was slightly overcast, with just the barest chill in the air. 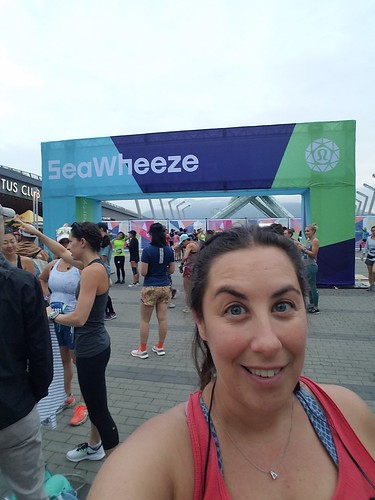 I headed over to the start line to get in my corral, but no one was getting in their corral.  It was just too crowded.  So I hung out on the sidewalk with other runners, just pressed into the crowd.  There were wave starts, so eventually we were able to get onto the course, and head to the start line. 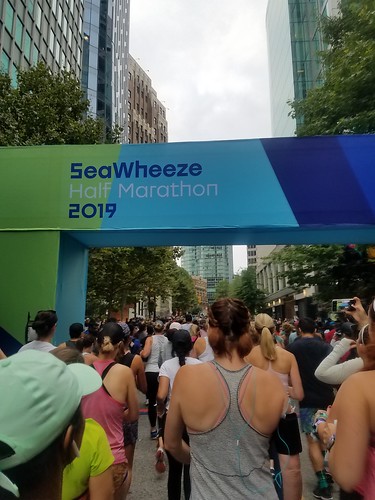 We ran through Gastown and Chinatown and over the Georgia Viaduct which was decorated with those wavy hand guys. 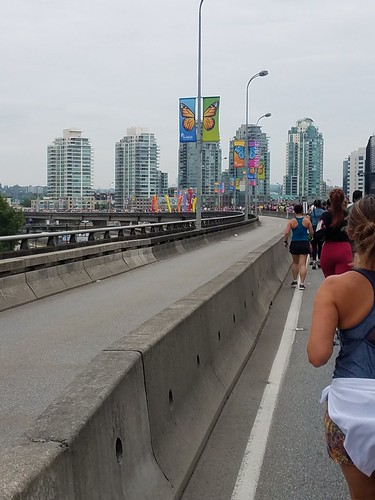 Ride Cycle Club was out on the course, using their energy and motivation to keep us motivated. 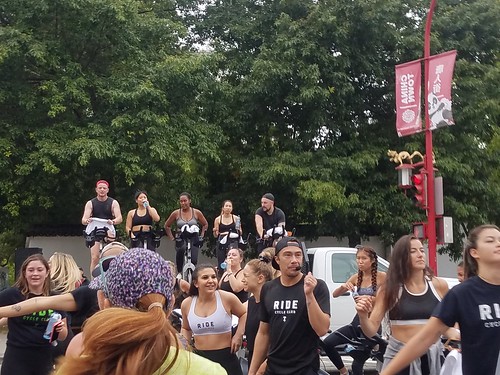 There's nothing better than drummers on a race course, I firmly believe there's a connection between percussion and heartbeat.  It's such an energizer. 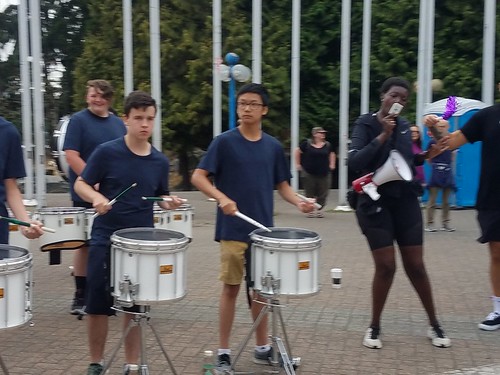 We ran beside False Creek - which was fun because typically I ferry across it! 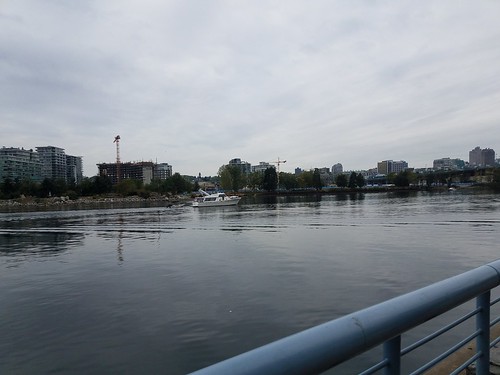 The first 4 miles were so easy and fun.  My time was great, and I was feeling great.  We turned onto Burrard Street, which had just a minor incline, but for some reason I was feeling it.  I was really nothing compared with the hills at home, but I found myself having to push it as we went across Burrard Bridge into Kitsilano. 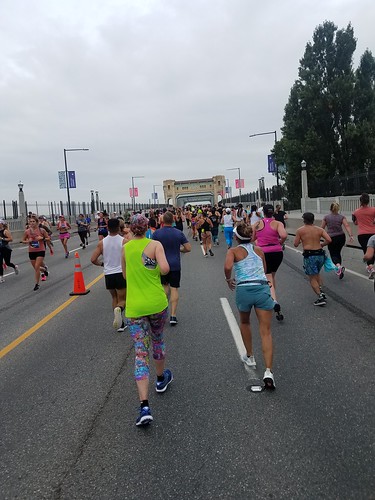 More drummers!  We ran around Kitsilano and through the misting station and back down - which meant downhill.  This is also where my Hadestown songs started popping on my playlist.  And let me tell you how much fun I had flying down the hill and singing:

"I'm coming wait for me
I feel the walls repeating
The echo of my feet
It sounds like drumming.
And I am not alone
I feel the rocks and stones
Echo in my song
I'm coming" 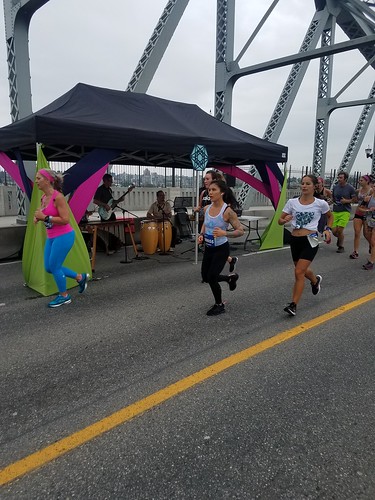 And after that we were running the coast at English Beach. 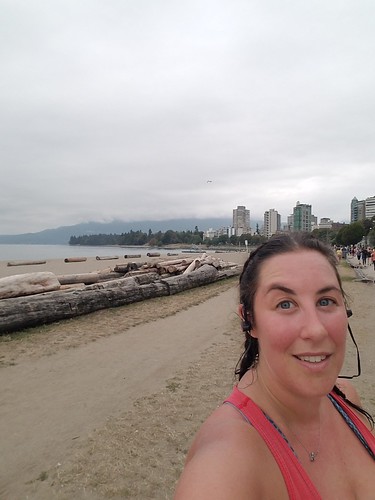 And all along the seawall. 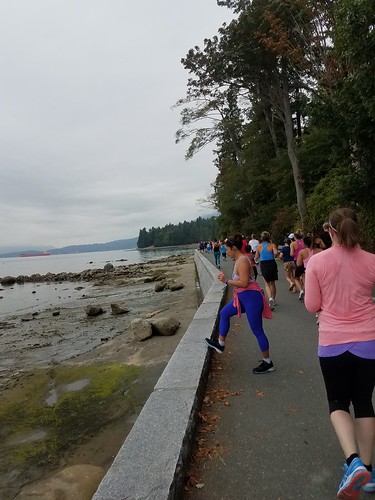 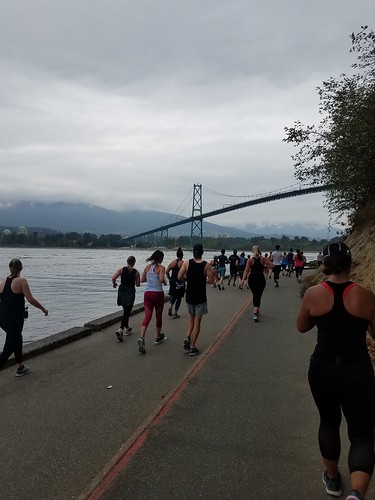 Right before heading into Stanley Park we ran into a group of mermaids. 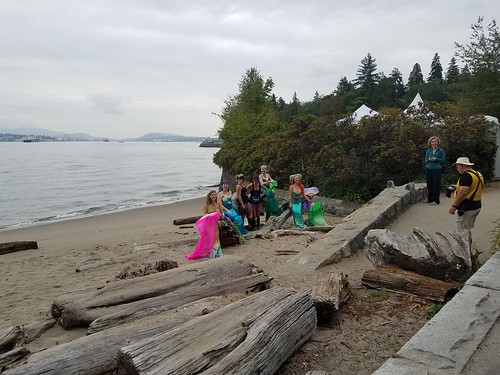 And then with a little less than 2 miles to go we were covered in trees in Stanley Park. 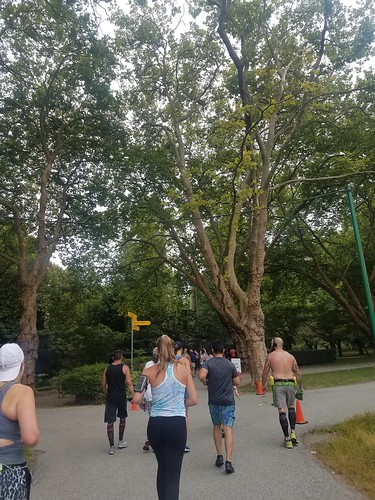 And then it was over. 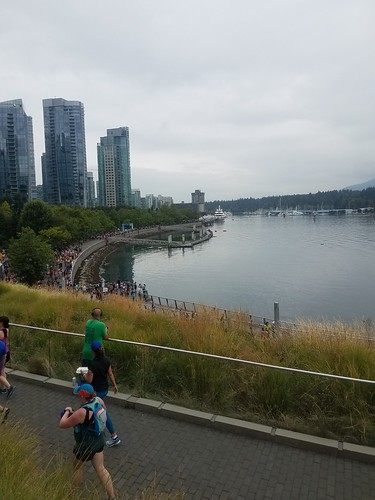 We got our medals, hats, and headed up to grab brunch - banana bread, grapes, and yogurt. 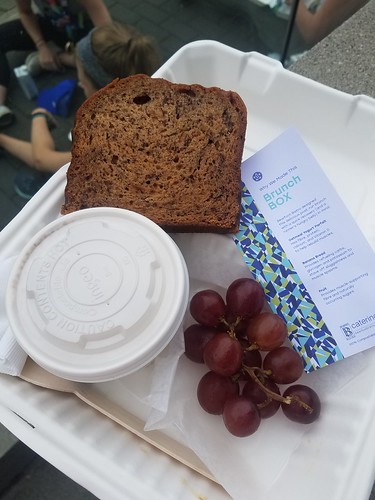 And then we headed into the recovery room.  There were massage therapists, as well as self-care tools like theraguns and massaging chairs. 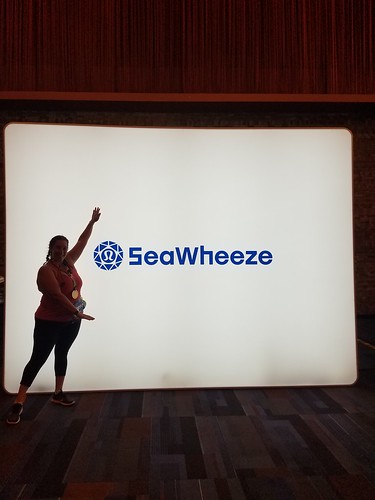 After a massage I headed back to my room for a long hot shower.  I walked around Vancouver a bit, picked up a snack and some treats, and then headed back to grab one of the shuttles to their Sunset Festival.  Because even though the weekend was over, the festivities were not. 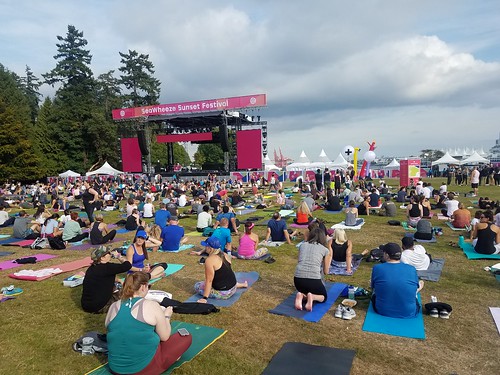 Stanley Park had been turned into a yoga and music festival.  We spread out our mats and were led in meditation and a yoga class.

Before the music started, I had a little time to explore, grab a bite to eat.  And a beer specially brewed for the festival. 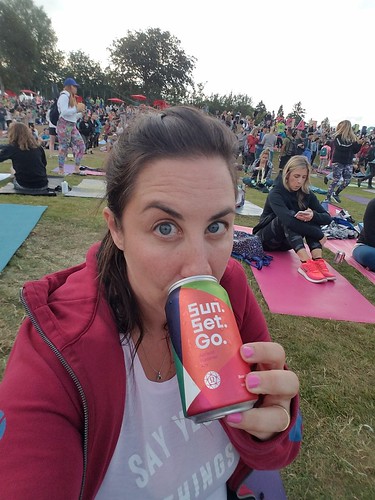 There were vendors and a pop-up shop, and even an "enchanted arcade" with video games. 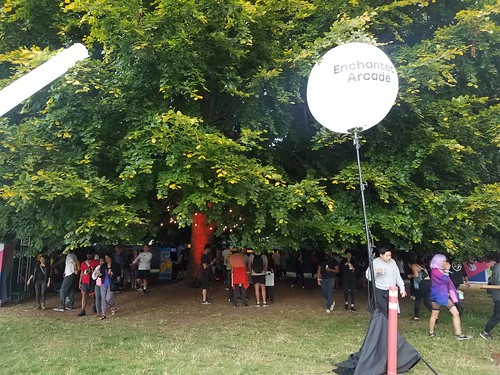 At 7:30, the first act took the stage - Big Wild.  He kept the crowd energized as he danced around on stage, playing drums and speakers. 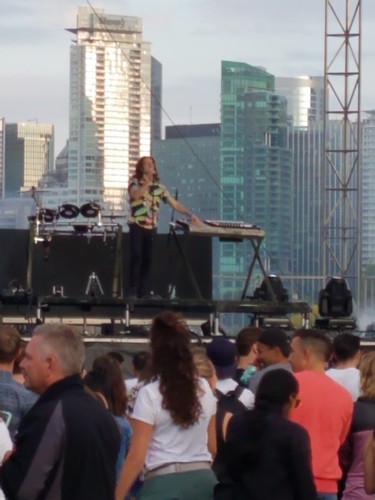 At 9:00 Kaskade lit up the night.  It was another high energy performance, but it was a long day and I'm an old lady.  So after a few songs I headed back to the shuttles to go home and go to sleep. 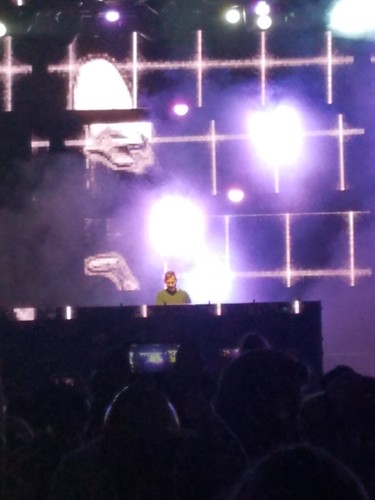 The race itself was such a great experience.  I loved every minute of it, which I can't say for a lot of half marathons.  It didn't seem too long and there was no point at which I thought "why am I doing this."   There were water stations about every 2k (or 1.2 miles), two different misters on the course, and so many "activation stations" which is what they call the spin cyclers, the mermaids, the drummers, to keep you motivated.  But what makes it such a great race is that it's more than just a race.  I've traveled to a lot of races and sometimes that feels like a lot to do just to run 13 miles.  It seems a lot less of an ordeal when there's more to do than just run.
Posted by That Girl at 1:00 AM