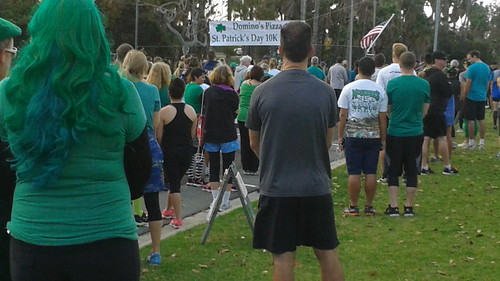 I  have to admit, I was looking forward to this race.  I have no idea why.  It's not a big race.  It's not terribly well publicized.  And I'm not even Irish.

I think part of it was the fact that I got to gear myself up in my favorite color.  With a shamrock headband and leprechaun socks.  I wasn't the only one.  Mission Bay was filled with green yesterday!

It might also have been the fact that it's been years since I've run a 10k.  I didn't have any goals in mind for time, I just wanted to see how I did.  And no expectations is always a nice change of pace.

There are 3 distances for the race.  2 miles, 4 miles, and 6.2 miles.   The 2 and 4 mile started first.  And I can't really tell you anything about that course.  After they were gone, those of us running the 10k lined up.

The first 3 miles were around Fiesta Island, much like The Resolution Run.  I'm pretty sure the fourth mile was there too, but I'm not positive because after mile 3, there were no more mile markers!

But eventually we were back along the bay. 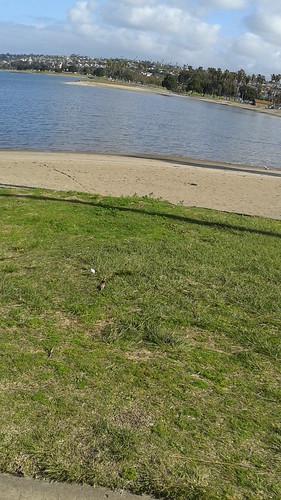 At mile 5, there was a man with a stopwatch and a sticker that said "Mile 5" so at least I knew that I wasn't still running the longest third mile of my life. Although I felt okay.  My running app glitched and had me running 4 minute miles, so by the time I hit Mile 5, it considered me long done.  (Maybe that's why there were no mile markers after mile 3?) In reality I was running about 10 minute miles for the first few miles. 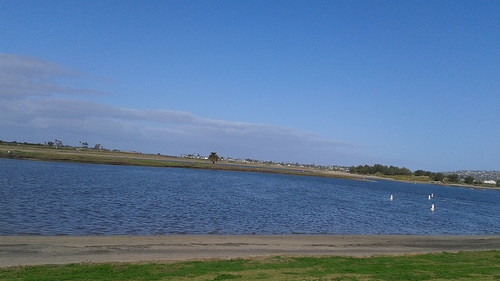 And then I saw the Finish line approaching.  And I had enough energy to pick up the speed before I crossed. 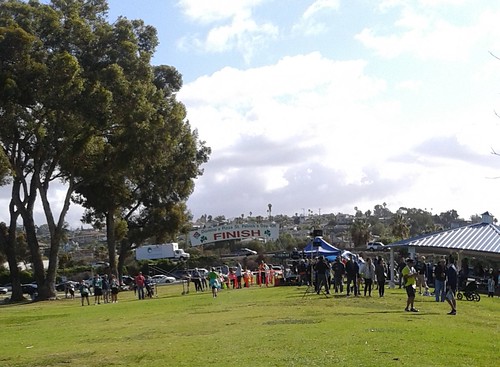 My low expectations worked to my advantage.  I finished in 1:04.  And while that's not my fastest 10k time, it's my fastest in a long time.  And seems to correlate with my current 5k speed.

After I finished, I headed over to the line for picking up my shirt.  Since Dominoes was the sponsor, they also provided pizza for all the runners.  Yum to pizza at 9am!     I picked mine up and headed to the highlight of the race - the beer garden.

Pizza and beer after a race was very much appreciated.  I was a little bummed I couldn't hang out and enjoy, but I had a baseball game to get to! So I finished up and headed out.  But there's a good likelihood I'll be back again.