This is one of my new favorite San Diego races.  Even though it's not a race for me.  As part of the Carlsbad Marathon weekend, Legoland hosts a special race for the littles.  A mile race through the park.


We met up with Lexus and her family before the race.   Getting into the park was easy.  At a lot of races with onsite parking, the lines snake back to the freeway and it takes almost as long to park as to get to the race.  This was smooth, with the line of cars constantly moving.  And we got free parking close to the expo (and park entrance)!

We had a little time to kill before the start of the race, and then headed to the corrals.  The corrals are divided by age, with the last corral being for 4 and under.

The race has wave starts, beginning with the oldest age group.  Which I get, because they're faster and would likely trample the smaller kids.  A lot of them were done before we even started.  But it is hard to keep 4 year olds occupied for the 30 minutes before our wave got walked to the start line.

When the race started, the kids took off.  Thatboy, Thatbaby, and Lexus's dad walked the stroller.  We told Lexus and Thatkid to just run, the moms would keep up with them.  And run they did.

Lexus and Thatkid are the perfect running partners.  She's faster than he is, which pushed him to run faster.  But he takes less breaks, which pushed her to run longer.   At the end, she pulled ahead and ended up finishing before Thatkid.

Then they both had to wait around for Thatbaby and the dads. 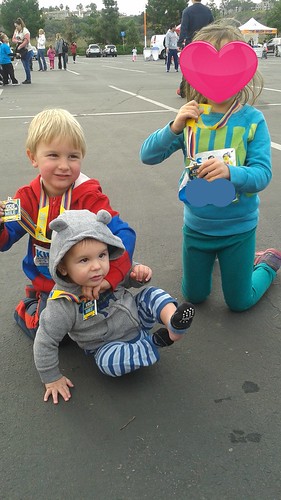 The course was great.  It was a loop through the park, which was a neat way to see all the parts of the park we never get to.  And unlike the CHOCwalk at Disneyland, there was plenty of room for the kids to run.  The wave starts meant it wasn't terribly crowded on the course.   They even had an aid-station, which our kids didn't want to stop at.

After the race they had dancing, circus performers, food, and fire trucks! 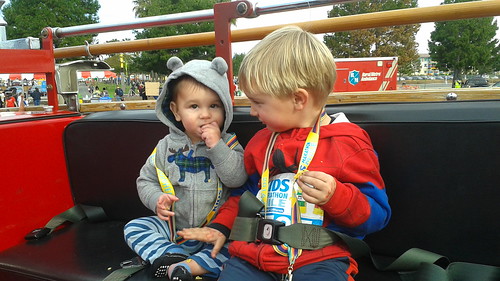 Thatkid had a great time at the race and definitely wants to do it again next year.  I'm looking forward to making it an annual tradition.  I can already see these brothers running away from Thatboy and I, as they race each other toward the finish!