When I was pregnant with Thatkid, Disney announced an inaugural race, the Tinkerbell Half Marathon.  I loved the idea of the race, and I love running inaugural events.  There was only one problem.  I would be 3 months postpartum at the time of the race.  I spoke with my doctor about the recovery period and she felt that as long as I had a non-complicated vaginal delivery, it didn't sound impossible.

And it wasn't.  3 months after Thatkid was born, I ran a half marathon.  Sure, it wasn't my fastest ever, but it also wasn't my slowest.

So this time around, I thought nothing of signing up for a half marathon 6 months after Thatbaby was born.  6 months - I gave myself double the time!  I liked the idea of having a goal in terms of getting back to running after birth.  I also wanted to run this particular course.  The San Diego Holiday Half Marathon prides itself on being a PR course, because of the net downhill elevation.  I mean, look at that.  Doesn't look so intimidating, does it?

Plus, since this is the one year we weren't traveling for the Christmas holiday, it was my only chance at running it, since usually we're out of town during the running of the race.

This is one of those stories that you can probably already tell where it's going.  It was a disaster of a race for me.  And I blame it on a lot of things.  The first was my lack of training.  I really got into the groove in 2014 with my training, I cut back on my weekday runs, going for quantity over distance.  I only ran 3 miles a day, but I ran 3 miles every day.  Oh how much easier it was to train with only one kid instead of 2!  And when I wasn't in trial!  I barely got a weekday run in during this training session, relying only on long weekend runs.  Which is fine for endurance, but not for speed! 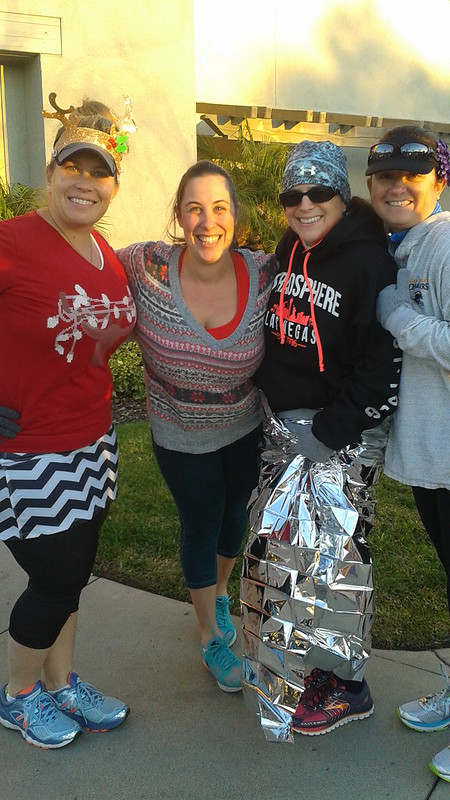 The second problem is that although the course is NET downhill, there's still a lot of uphills involved!  It may have been the hilliest course I've ever run.  None of the hills were terribly steep, but there were enough to really wear out my legs.  I don't know that I've ever been so sore after a race!

My running partner for the race was SDMom, which is always fun, because she knows every runner in San Diego.  Plus, our paces were on par for this race.

The first couple of miles weren't all that bad.  Despite being uphill.  We had the nervous energy and adrenaline to carry us forward.  Plus is was cold!  When I parked for the race, it was 30 degrees!  We had to run to warm ourselves up.

We started with the 2:30 pacers, which I felt was appropriate, given it had been over a year and a half since I'd run a half marathon.  We passed them and maintained a comfortable pace ahead of them.

By mile 8, SDMom mentioned that as long as we stayed in front of them, we were golden.  Which didn't seem so daunting, because at that point we couldn't even see them.  Plus the boring part of our run was over.  The course ran along the 56 freeway.  Which meant we had a view of a freeway for a majority of the course.  No crowd support.  No beautiful vistas.  But that was all about to change, because we were heading off the freeway and onto the trail.  I know this trail!  This is my trail!  The trail I ran on every day for years because it was about a quarter mile from home.

But it was also where we started feeling our miles.  By mile 10 we could hear the 2:30 pacers right at our heels.  By mile 11 they had passed us.  This is also where SDMom and I split up.  Those last two miles were hot, boring, and hard. And painful!  My bodyglide had failed me and I had chafing on my bra-line.  But eventually, the finish line was in sight. 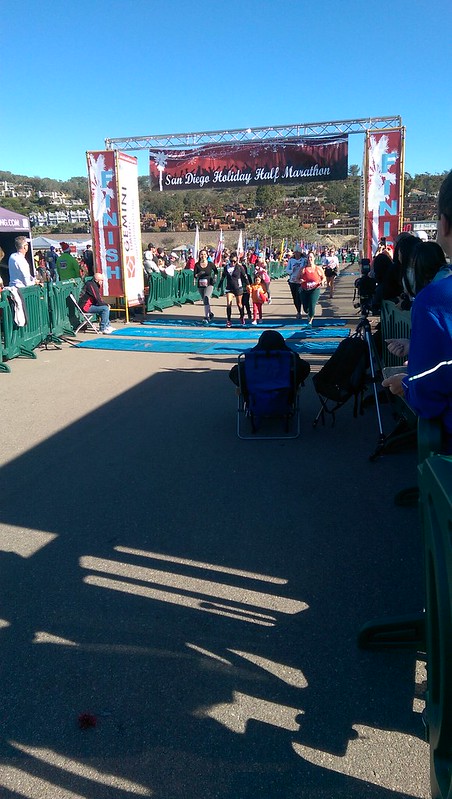 And of course, I had my cheering squad waiting at the finish line, which is the best part of finishing a race.  No matter how slow. 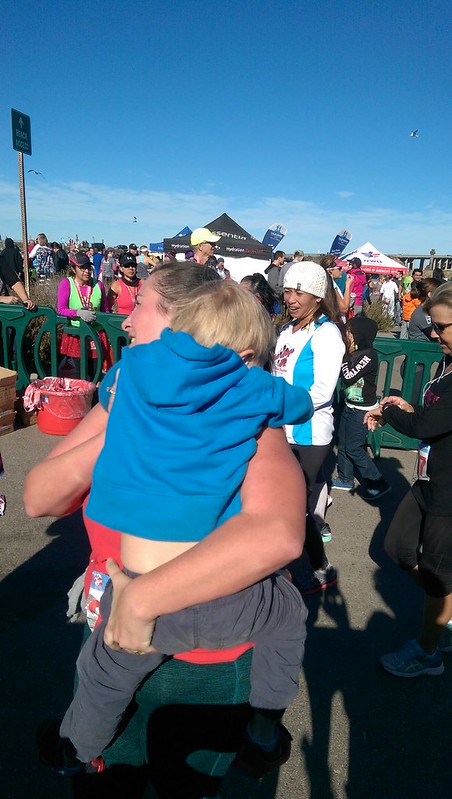 Well, that and the shiny new medal.  Which Thatkid has already claimed with the insane 4-year old logic of "well Daddy and I drove the course, so I did the half marathon too." 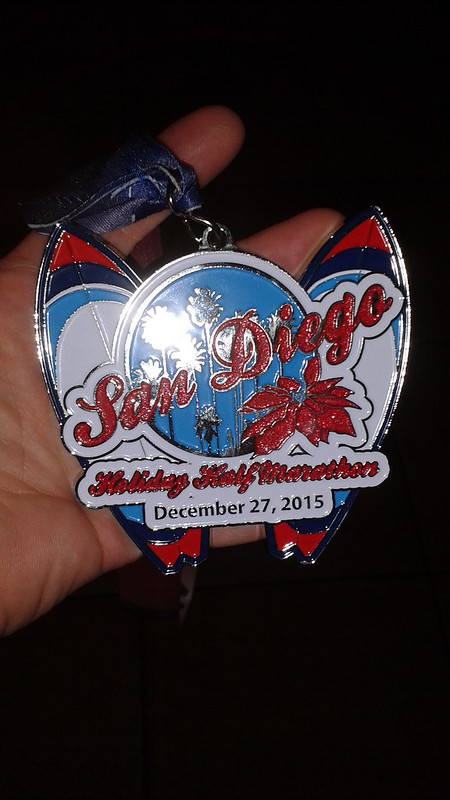 So it wasn't my best race, but it's a good benchmark, a starting mark for how far I need to go to get back where I was.  And I've got a couple months to get there.  My next half-marathon isn't until May, so I have some work to do!
Posted by That Girl at 1:00 AM