I've been remiss in not posting about the Fit Foodie 5k.  I wish I had a better excuse than life, but I don't.  But let that not lead you to believe the race was any less amazing than last year.  It remains one of my favorite San Diego races.

Like last year, I stayed downtown the night before the race, and ran down to the start.  Or rather, past the start since it had moved slightly this year.  I like the new starting/finishing area, and the slight change of course.  It leads to a more picturesque finish. 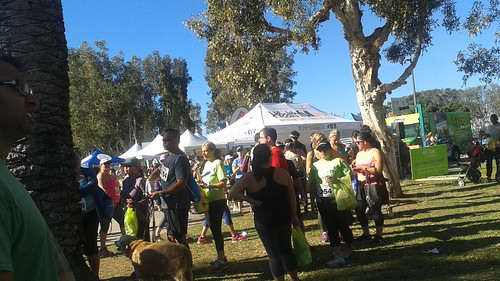 There were warm ups being led by Stacey McDermott and The Q Crew.

And cooking demonstrations by Cooking Light and Better Body Foods.

There was also an amazing coffee bar set out, with different flavored syrups, whipped cream, and travel mugs to take with us. 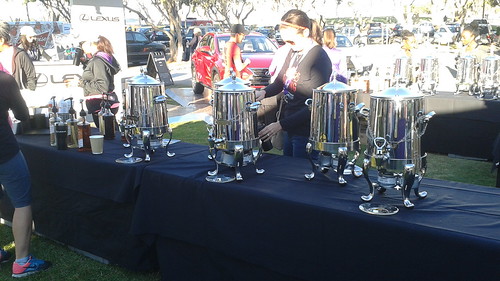 The race started, right on time and we were off! Because I was partaking in the Finisher's Village a little early, I ended up being towards the back of the pack.  Which was fine because I wanted to take it a little easy since this really was my first 5k back.

And I did.  I didn't push myself, just went for an easy run.  For the first mile.  When my Nike+ app came on and told me I ran under a 10 minute mile.  And I wasn't even trying!  I knew I wasn't going to keep that up, but I did decide I was going to push it a little.  I dropped my speed a bit for the last two miles, but still hit 3 miles at 30 minutes.  Which was much faster than expected.  The finish was slightly longer than a 5k, my app read that when I finished I had run 3.22 miles in 32 minutes.  Not so bad considering my times during pregnancy, and just before.

Right after I crossed the finish I got a text that my pit crew had arrived!

Thatkid and I went around the Finisher's Village, taking pictures and sampling all kinds of goodies.  By the time it was time to go, we had accumulated quite the stash.

The race was a swimming success and I've already got a team lined up for next year!
Posted by That Girl at 1:00 AM