Sharing the secret -  I'm not the kind of person who announces their pregnancy as soon as a second line shows up on the test.  Last time around we waited until the second trimester to share the good news, even with our parents.  It goes back to those miscarriage numbers I was talking about earlier.  Once you tell someone, even a parent, you have to be prepared they are going to share it with everyone they know.  And while good news travels fast, bad news often doesn't.  If anything had happened I wouldn't want to be in the grocery store when a friend of a parent came up, rubbed my empty belly, and asked how the pregnancy was treating me.

The risk of miscarriage drops after the heartbeat is heard, so we decided to share the news with family after that first appointment.  Thatboy called his family and told them over the phone.  They were disappointing.  He was expecting them to be enthused, but they acted as though he told them we were getting a new couch.

I got a different reaction from Thatbrother.  I wanted to let him know first, before anyone else.  I don't know if I had a real reason for that, just that I was sending things out to family and I wanted him to know before the cousins and aunts.  Thatbrother was excited, although he expressed disappointment that we wouldn't be having our second kids at the same time.  Given that he had a 3 month old at the time, I told him our schedules probably wouldn't match up.

The next people we told were the matriarchs of my family.  My mother, cousin, and great aunt were all heading east to visit my grandmother.  I wanted to share the information with them at the same time, kind of as a pick-me-up for my grandmother.  We recorded the heartbeat at the appointment and I texted it to my mom, telling her it was a special message from Thatkid to my grandmother, and she should play it when they got there.  She couldn't get it to work.  And given that she didn't think it was a big deal, didn't bother trying to make it work, despite my pleas with her to keep trying as I sent it through as many avenues as possible.  When she finally got it to work, and read the accompanying message, she was ecstatic.  Everyone was.  It was the reaction Thatboy had been looking for.

As for the rest of the family, we sent them a special message on Halloween: As for our friends, we sent them a little Thanksgiving message from all of us, including the little turkey coming this spring.


Well, we're at 24 weeks my friend.  And I feel like I am exponentially bigger than last month.  Currently Oppo-baby is the length of an ear of corn! 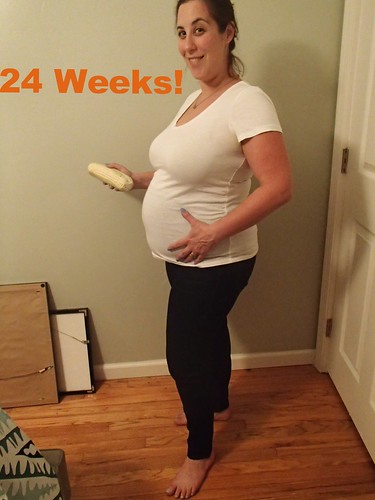 Next Appointment: March 2.
Maternity clothes? Mostly non-maternity this week, with the exception of a couple maternity dresses.
Stretch marks: nada.
Sleep: I'm having a hard time sleeping in the early morning.  That really obnoxious light sleep where you're aware of everything around you.
Best moment this week: Seeing movement! (see below)
Movement: Yep. And I've been saying for a while Thatboy would be able to feel them if he had any patience, this week not only did he feel them, but we both watched something move across my stomach. It's that very cool and creepy alien looking thing I never had with Thatkid, possibly due to the anterior placenta.
Food cravings: Nothing
Food aversions: Cured meats (pepperoni, proscuitto) just aren't appealing this week
Gender: Not finding out
Belly Button in or out: In.  But it never popped last time, so I'm not expecting it to this time.
What I miss:I could so go for a glass of something alcoholic.  Or two or three.
What I am looking forward to:  Nothing big this week.
Contractions: Not this week
Milestones:
-Viability.
- Skeleton is hardening
- Brown fat is forming on the neck, chest, and back to be used after birth to produce heat and energy.
- Baby is yawning!
- Baby can breathe in and out through each nostril.
Posted by That Girl at 1:00 AM