Months and months and months ago L&O's sister sent her a message about a new half marathon this year that featured rest stations with cake and grape drink.  Sounds pretty fun right?  Beat the Blerch is a race based on the comic strip by Matthew Inman featured in The Oatmeal.  The Blerch, anthropomorphized into a fat little cherub, is that nagging little voice that tells you to walk the next mile, go home and eat pizza, or hit the snooze button instead of running.

There was no way I was going up to Washington to run the race, so instead I just watched in amazement as it sold out.  Then as they added another race day and that sold out too.  I was kind of giddy when they next announced they'd be doing a virtual version of the race.

I've never done a virtual race before, unless you count the virtual marathon I ran back in 2010, but at least I ran a component of that race!  This time I was completely on my own.  A couple weeks before the date of the race, my race packet came in the mail.  Check out the swag!

There's a bib and tech shirt, or course, and a medal.  But there was also gummy bears (Thatbaby loved) stickers, magnets, lip balm (which Thatbaby is trying to commandeer) and a Blerch stress ball (which Thatbaby did commandeer).

The race date was September 20, so I knew I wanted to get my miles in then.  So when SDMom asked if I wanted to join her on a run that morning, I said "sure" even though it meant getting up at 5am on a weekend and running in the dark. 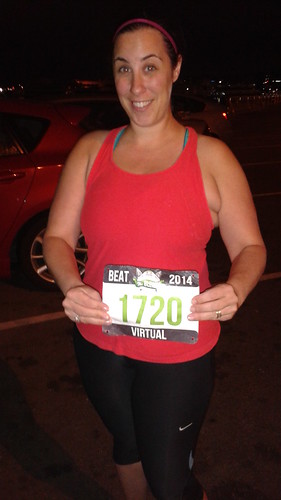 It didn't stay dark for too long though, and I do love running with people.  It was a new location for me, running along the bay downtown.

So even though I felt totally lost and turned around most of the time, it was a nice, scenic run.  And pretty flat!

Plus, I got to see a lighthouse!  Bonus!  And with it being so hot lately, it was nice to go early enough where it was relatively cool.   When we got back to the start, I medaled myself.

My first virtual race is in the books!  So how about you, have you ever run a virtual race?  Would you want to?