Apparently not having plans on the weekend must give Thatboy and I some sort of anxiety. Perhaps it's a fear of having to spend too much time together. He's not very entertaining and there's only so many times that "The Itsy Bitsy Spider" will amuse him.

At any case, as soon as we realized we'd have no plans this weekend, we quickly filled it up. Yesterday was the McDonalds journey, and today we ventured to Alaska for a Food Truck Festival.

Picture this as an ultimate Food Truck Mashup - 10 LA Food Trucks meet with 10 San Diego Food Trucks. In One Location. 10 Come, but, as we all know, There Can Be Only One. Alright, not really, it wasn't a competition, but still, it's fantastic to have so many great food sources in one place!

We ended up only sampling 6 trucks before we decided it would probably be a health hazard to continue. I tried to convince Thatboy that we should try to squeeze in four more just to get in a solid 50% and he looked at me like I might have lost my ever-loving mind.

So here are the six we tried, from worst to best (That will keep you scrolling down!) 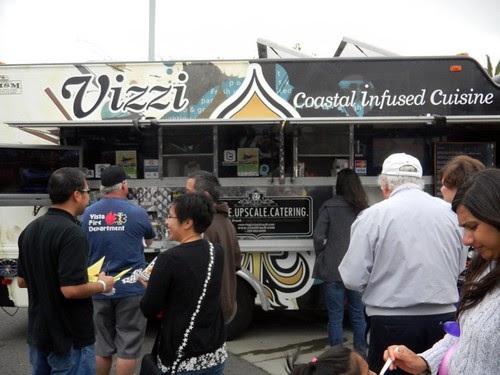 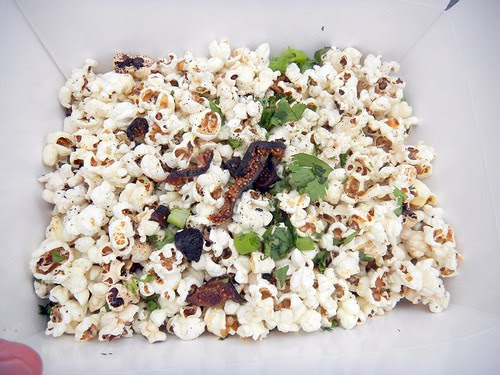 As soon as I saw popcorn on the menu I was hooked. As usual. But that's the problem. We order popcorn at restaurants a lot. And it's always better than this batch. Always. Thatboy thinks it's because the local restaurants all use heirloom black kernel popcorn. Yeah, we're spoiled. 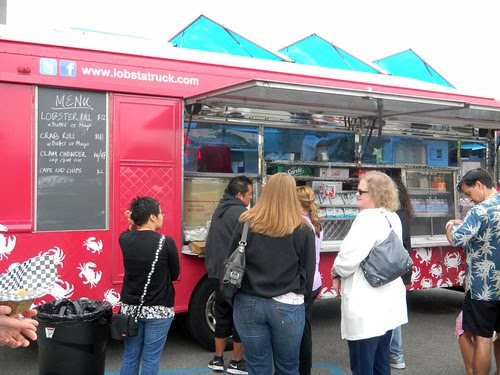 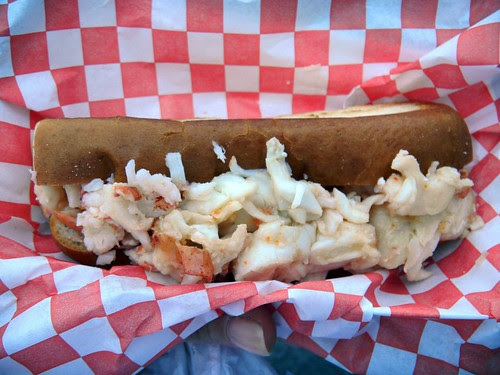 We really wanted to like this, given it's high praise . In fact we hit this truck up first, before too much of a line could form. But both of us were really unimpressed. Maybe because I've had some really fabulous lobster rolls before? Maybe because we do lobster a fair bit at home? I dunno. 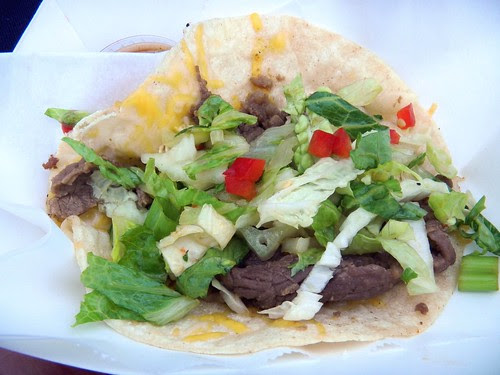 The hot sauce really made this taco. The taco itself was okay, but once we added the hot sauce it was phenomenal 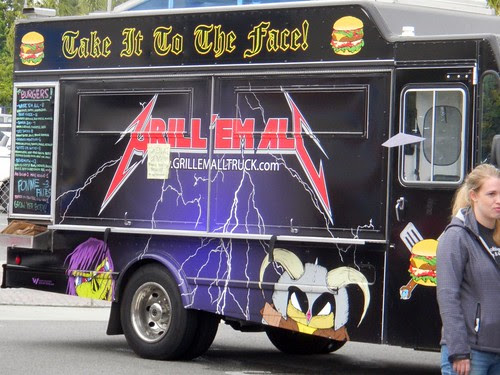 The Grill Em All truck opened an hour and a half after the festival started. About 30 minutes before they even opened, this is what the line looked like: 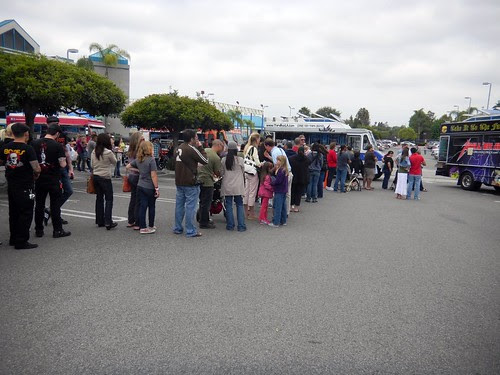 And that was just the first half of the line! We ordered the Witte - cream cheese, fried bacon, and beer soaked and sriracha soaked onions. 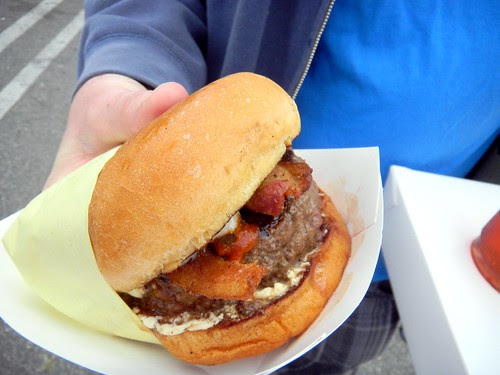 This truck was especially popular given that they won the "Great Food Truck Race" on television. There was a local truck there who competed this year, but since it hasn't aired yet, their line was pretty normal sized. Just to let you know what draws people in. Thatboy really liked this burger, which is why it ranks higher on the list. I was less impressed. It was kind of bland to me - I felt like it needed more kick. Especially since I was expecting it with the sriracha. 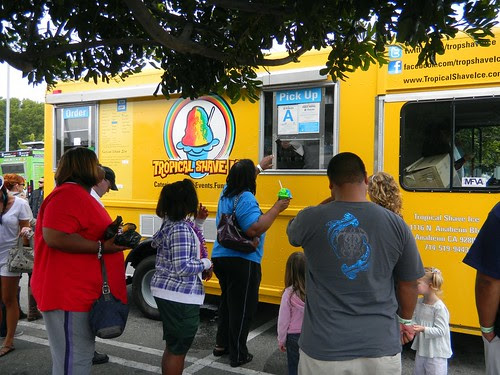 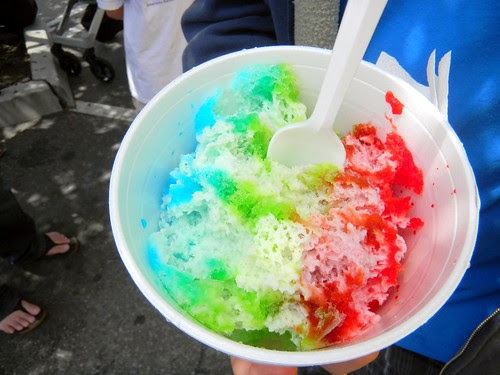 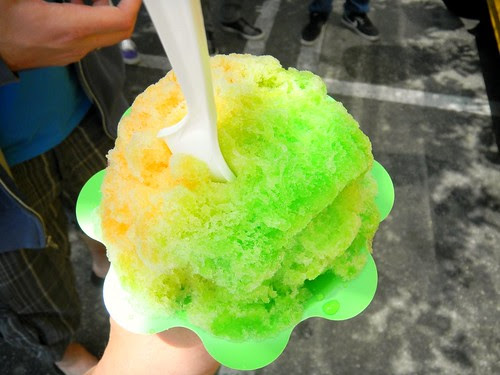 This was the truck I was most looking forward to since my love of shaved ice is no secret. These were the best I've had "on the mainland." Super finely shaved, perfect amounts of syrup. Thatboy even wanted some more, and they were happy to oblige. 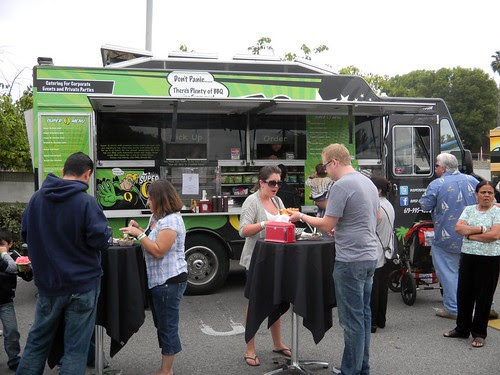 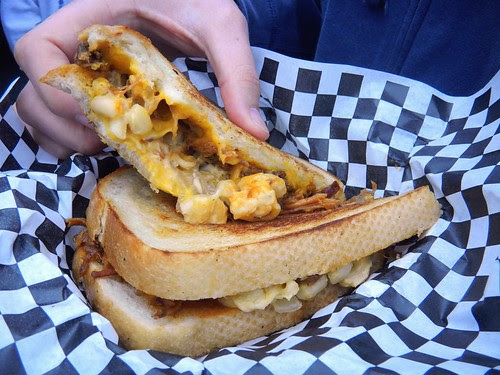 This was our favorite - hands down. Seriously, whoever decided it would be a good idea to put macaroni and cheese on a sandwich should be knighted at the very least. And the pork was just perfect - sometimes there's not enough barbeque sauce, which really makes the pulled pork. This one was saucy and flavorful without dripping sauce everywhere.

The five dollar entrance was redeemable for a five dollar gift certificate to the amusement area where the festival was held. We decided to use it on Laser Tag since Thatboy has never done Laser Tag before. (I know, I don't know where he grew up either.) 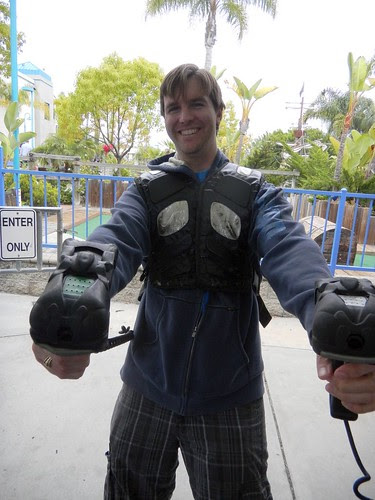 After all that food, we were pretty certain we'd never need to eat again. Dinner tonight was just pickings. So I'll share a backup recipe with you - another lamb dish. Another braised dish. You know how I love braised meats! Like most of my braising recipes this is pretty simple - meat, veggies, liquid and cooking low and slow. 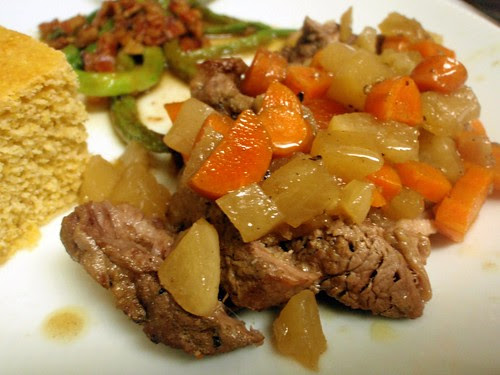