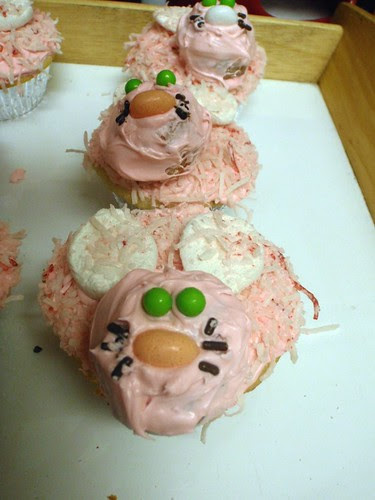 On the off chance that anyone is still there. There has been a decided absence round these parts, as unintentional as can be, although I warned you things would be a bit hectic around here. Let's break it down a bit.

Monday - I knew it was going to be a long day, since we were supposed to head up to LA for the first night of Passover seder. Except as we were leaving the house, Thatboy did something to his back that had him laying on the floor screaming in pain. So the night was instead spent in urgent care. And Thatboy's injury kept me running around breathless for the past two weeks.

You don't realize how much marriage is a partnership until one of you becomes injured. That injured party contributes to all the mess of the house, but none of the cleanup. So laundry for 2 was still being created, but not done. Dishes for 2 were still being dirtied, but not washed. And I was left in charge of all the little chores we usually split - garbage, dog walking, etc. on top of the things which are usually my purview completely - making meals.

Tuesday was dinner with Thatmom for the second night of Passover, which also had us getting home later than the time we usually turn in for bed.

Wednesday I grabbed dinner with Prez. And eating out during Passover is never fun. Especially when Prez orders pizza for her meal. Then I got to come home and take care of the invalid, dog, housework, and lunches for the next day.

Thursday was my night to "take care of it all." As Thatboy sat in his "my poor back" chair, doped up on drugs, I spent the night making dinner, lunch, egg custard tarts for our coworkers, and packing for the weekend - both Thatdog's stuff for "camp" and our stuff for actual travel.

Friday through Sunday I spent a miserable weekend with the inlaws. No big surprises there. I should save all that good time for its own special post. But needless to say, a lot of bad information was given by the inlaws who think they know everything, another last minute invitation was given to a party that was probably known about before we packed for the trip, and being pregnant did NOT, as one might think, increase my tolerance for selfish and thoughtless behavior.

Of course, we came home about a week behind. I thought I would be officially caught up on everything by Wednesday. But I apparently failed to take into account that I would be trying to catch up on 2 people's stuff, with only one person. (Can I just say that I am really excited for Thatboy's back to be better?) Here it is Sunday night and I am just now almost caught up - but not quite. The dishes are done, the laundry is clean, and I finally got a chance to dye my Easter Eggs I had hardboiled specially for the occasion: 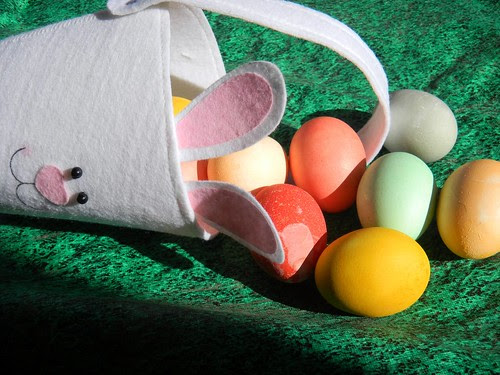 But I didn't quite get a chance to do the major cleaning overhaul that this place desperately needs. I guess there's always a goal for the next week.
Posted by That Girl at 7:13 PM