Ready for a new adventure?

Last year around this time I was reading Ruth Reichl's Garlic and Sapphires. Remember how much fun we had as I "cooked the book" and made all the recipes? Well it's been almost a year, and as fate would have it, I've started another book that revolves around food, eating, and contains a bunch of new recipes. So I've decided it's time for another "cook the book." This one, however, requires a little more of me than stopping off at the store after reading each chapter.

Barbara Kingsolver is one of Thatmom's favorite authors. I remember when I was young seeing her collection of every book Kingsolver had written, neatly lined up on her bookshelf in her office. When I was in high school, The Bean Trees was on our reading list one year, and being familiar with the author I was eager to read it. I've been afraid to change a tire on my car ever since.

When I saw Kingsolver's latest book in the bookstore I was surprised to find it in the nonfiction section. I took a closer look. Animal, Vegetable, Miracle - A Year of Food Life. It's the story of how Kingsolver and her family picked up and moved from Arizona to Virginia and attempted to live off the land for a year. Locally grown, caught, and killed food - including that produced on their very own farm. The idea is intriguing and romantic. Almost Rosseauian (is that a word? As in, relating to the French philosopher Jean Jaques Rosseau, and returning to a state of nature.) I immediately added the book to my reading list, but it's taken me until now to begin it.

The idea of "local eating" or localtarianism or locavores isn't a new idea. I'm very behind on the trend. And I want to preface this by noting that I am not plannig on going local. There are plenty of people who have taken a "1 month challenge" to eat locally and that's not where this blog is about to go. However, I did figure that as long as I was going to make these recipes, I would do my best to try to use local ingredients.

And I'm pretty lucky. In San Diego, there's a farmer's market every day of the week but Monday - and since it's summer, many of them are even in the evenings! Now, because the book takes place over a year, not everything is going to be available to me during these summer months. I'm still going back and forth over whether I'm going to sub in supermarket finds or try to find substitute produce - you'll have to stick around and find out.

I decided to start this new adventure on my way up to grab a bite to eat with Sweetcakes. I stopped off at the Oceanside Farmer's Market to pick up ingredients for the first recipe - Eggs in a Nest. 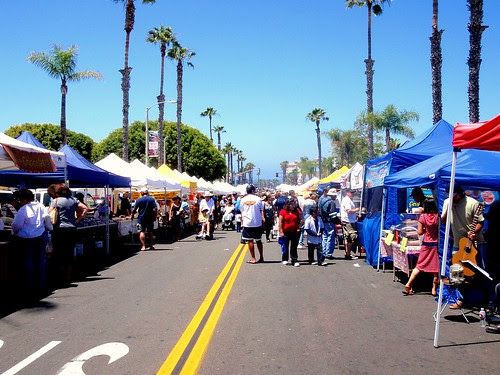 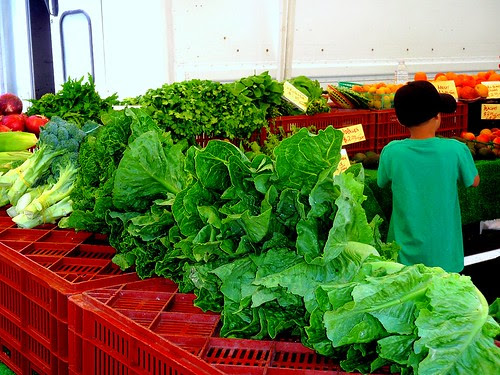 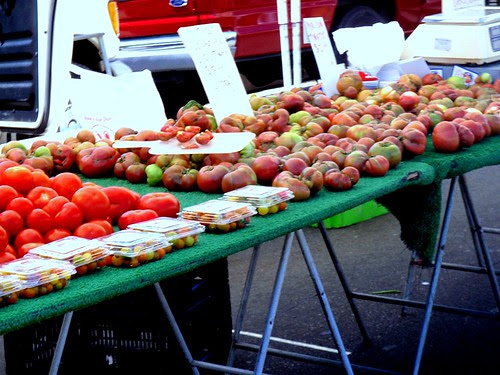 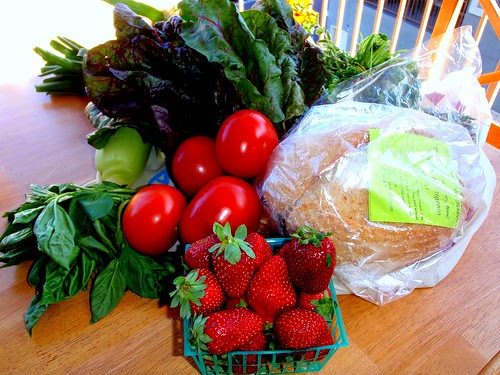 So what did I end up with?
corn
chard
basil
oregano
rosemary
cilantro
strawberries
tomatoes
and multi-grain bread
not pictured: chocolates!!! It's not a San Diego farmer's market without chocolate, we have so many artisan producers down here.

And then it was off to meet Sweetcakes. Since it's been a few years since I've lived in Orange County, I forgot what a zoo parking in San Clemente was. Sweetcakes wasn't very familiar with the area either so we both ended up being the exact same amount of late. Sweetcakes picked the restaurant and the view was definitely worth the parking troubles. 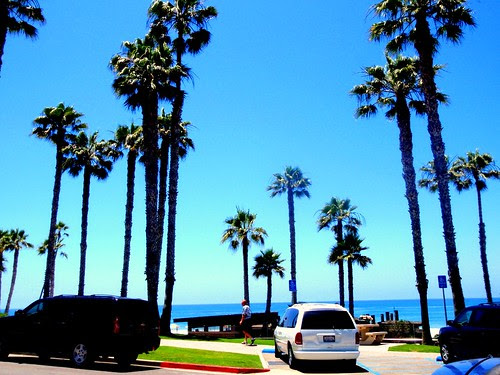 For both of us, it was our first trip to La Galette Creperie, but the older couple seated next to us informed us that this was one of their favorite restaurants. 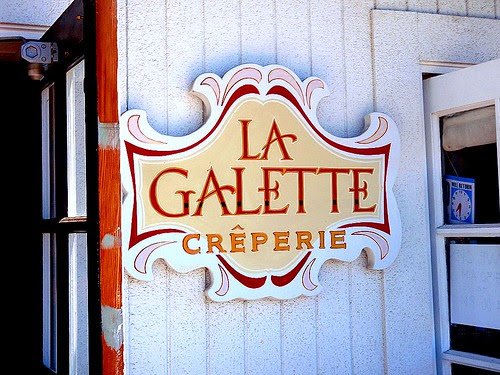 Sweetcakes ordered the Farallon - mushrooms, chicken, herbed potatoes in a honey rosemary sauce. She loved it and kept offering me bites - but I'm not one to get between a pregnant woman and her food. If you look closely, you can get a glimpse of Sweetcupcake - who is waiting to make her arrival any day now. In fact, I kept having terror visions that Sweetcakes would go into labor during our visit. 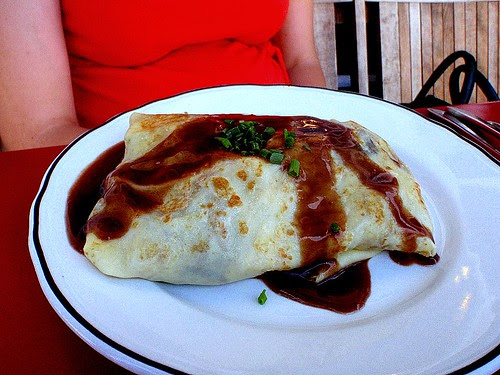 I had the Caprese, one of my favorite combinations. 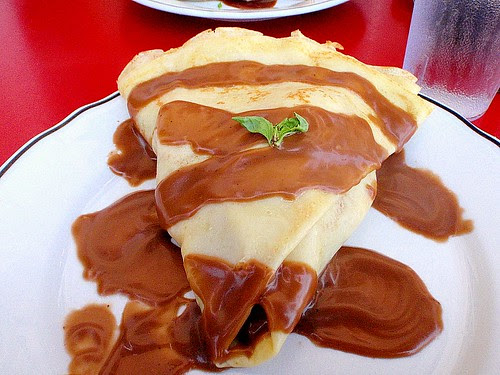 Mozzarella, roma tomatoes, basil, and basalmic dressing. There is something SO good about fresh mozzarella. I decided that I was going to pick some up from my cheese store as soon as possible. 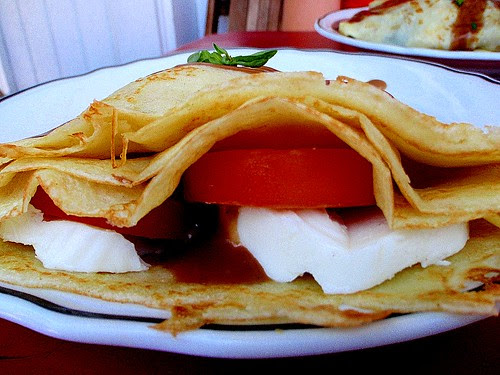 It was all too soon when we realized Sweetcake's meter was probably long overdue and it was time to say goodbye. I have a feeling I won't be seeing her again until Sweetcupcake's arrival.

As for my first Animal, Vegetable, Miracle (AVM) recipe, it was a complete and total sucess. When I told Thatboy we were having poached eggs, chard, and brown rice he told me he thought it was going to be "too healthy." When I told my friend Tesseract what I was making there was a long pause on the other side of the phone line before she cackled "yeeaaaahhh....you let me know how that goes." 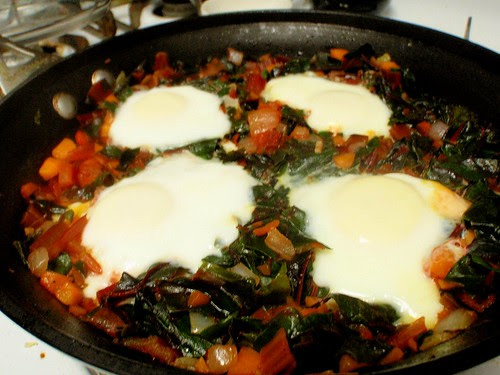 I have to admit, I wasn't incredibly excited about the idea...until I started cooking it. I LOVED how colorful it was! There is something about eating a meal that has so many colors of the rainbow - red tomatoes and chard, orange carrots, green chard, and white onions. Then it was just so darn cute with the little eggs in their spaces. Finally, there was the taste. Simple, but SO good. Thatboy said I had to call Tesseract back and tell her "I loooooved it, Thatboy looooooved it and you really missed out. So there." I didn't call her back. But I do enjoy when Thatboy enjoys a meal so much. Especially when he tried to tell me he doesn't like a main ingredient...like chard. 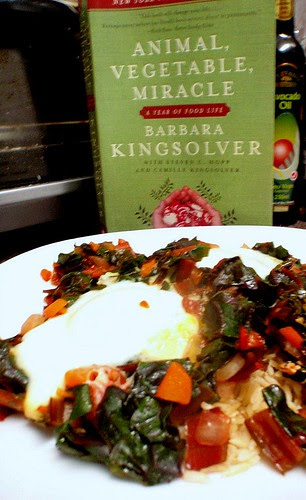 Eggs in a Nest (recipe available at animalvegetablemiracle.com)
Local ingredients used:
Chard (from Oceanside Farmer's Market)
Posted by That Girl at 11:21 AM